The Team At Aspen Institute

The Culture At Aspen Institute

Information provided by the company
Weaves goal is to spread this way of living, these social norms that prioritize relationships and community over striving for ourselves. The aim is not just to heal division. Its to spur a more meaningful way of being with others.
Show More
In every community, some people are weaving the social fabric by investing in relationships, making commitments to others and creating connection. They are quietly showing a better way to live than simply striving for personal achievement.
Show More
The Society of Fellows (SOF) is a national community of diverse and distinguished leaders who sustain and support the values-based work of the Aspen Institute. Members of SOF enjoy unparalleled access to Institute programs and events, including unique experiences with nationally-recognized speakers and thought leaders. They are the first to know about Aspen Institute events, and they receive special invitations to member-exclusive programs across the country.
Show More
We envision a community with a hundred thousand members supporting each other, building relationships and defining together a better way of living.
A strong commitment to the Aspen Institutes mission
Show More

What do people say about Aspen Institute

What do you like about working for Aspen Institute?

Aspen Institute is ranked #96 on the Best Companies to Work For in District of Columbia list. Zippia's Best Places to Work lists provide unbiased, data-based evaluations of companies. Rankings are based on government and proprietary data on salaries, company financial health, and employee diversity.

How much does Aspen Institute pay?
The national average salary for an Aspen Institute employee in the United States is $49,529 per year. Employees in the top 10 percent can make over $92,000 per year, while employees at the bottom 10 percent earn less than $26,000 per year.
8.1
Salary Score
Categories
Non Profits Companies
High Paying Jobs
Clinical Director, Summer Associate
Highest Paying Location
Washington, DC
Want to know more?
Show Salaries
Average Employee Earnings
$92,808
$62,973
$62,330
$49,529
$34,170

The average employee at Aspen Institute earns a yearly salary of $49,529 per year, but different jobs can earn drastically different salaries.

Some of the job titles with high salaries at Aspen Institute are clinical director, summer associate, finance analyst, and staff physical therapist.

A typical clinical director salary at Aspen Institute is $98,108 per year.

On average, employees at Aspen Institute stay with the company for 2.1 years. Employees most commonly join Aspen Institute after leaving The Catholic University of America. When they leave Aspen Institute, they most frequently get their next job at Chickasaw Nation Industries.

Do you Work At Aspen Institute? 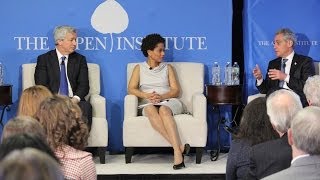 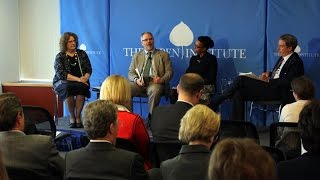 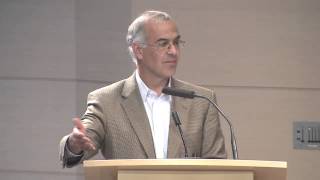 How Would You Rate The Company Culture Of Aspen Institute?

Some of the competitors of Aspen Institute are Bill & Melinda Gates Foundation, RAND, and American Jewish Congress.

The average salaries at Bill & Melinda Gates Foundation rank the highest, with their employees earning an average salary of $92,808 per year.

How many Employees does Aspen Institute have?

What industry is Aspen Institute in?

Aspen Institute is in the nonprofit industry.

What type of company is Aspen Institute?

Aspen Institute is a nonprofit company.

Who are Aspen Institute's competitors?

Who works at Aspen Institute?

Where is Aspen Institute's headquarters?

You can find the Aspen Institute website at www.aspeninstitute.org.

Are You An Executive, HR Leader, Or Brand Manager At Aspen Institute?

Zippia gives an in-depth look into the details of Aspen Institute, including salaries, political affiliations, employee data, and more, in order to inform job seekers about Aspen Institute. The employee data is based on information from people who have self-reported their past or current employments at Aspen Institute. While we have made attempts to ensure that the information displayed are correct, Zippia is not responsible for any errors or omissions, or for the results obtained from the use of this information. The data presented on this page does not represent the view of Aspen Institute and its employees or that of Zippia.