How to Become a Columnist

What is a Columnist

What Does a Columnist Do

There are certain skills that many Columnists have in order to accomplish their responsibilities. By taking a look through resumes, we were able to narrow down the most common skills for a person in this position. We discovered that a lot of resumes listed Communication skills, Computer skills and Interpersonal skills.

How To Become a Columnist

In addition to switching up your job search, it might prove helpful to look at a career path for your specific job. Now, what's a career path you ask? Well, it's practically a map that shows how you might advance from one job title to another. Our career paths are especially detailed with salary changes. So, for example, if you started out with the role of Editor you might progress to a role such as Owner eventually. Later on in your career, you could end up with the title Director Of Marketing & Development.

Average Salary for a Columnist

Columnists in America make an average salary of $58,189 per year or $28 per hour. The top 10 percent makes over $86,000 per year, while the bottom 10 percent under $39,000 per year.
Average Salary
$58,189
Find Your Salary Estimate
How much should you be earning as an Columnist? Use Zippia's Salary Calculator to get an estimation of how much you should be earning.

Build a professional columnist resume in minutes. Browse through our resume examples to identify the best way to word your resume. Then choose from 12+ resume templates to create your columnist resume.

Learn How To Write a Columnist Resume

At Zippia, we went through countless Columnist resumes and compiled some information about how to optimize them. Here are some suggestions based on what we found, divided by the individual sections of the resume itself.

Zippia allows you to choose from different easy-to-use Columnist templates, and provides you with expert advice. Using the templates, you can rest assured that the structure and format of your Columnist resume is top notch. Choose a template with the colors, fonts & text sizes that are appropriate for your industry. 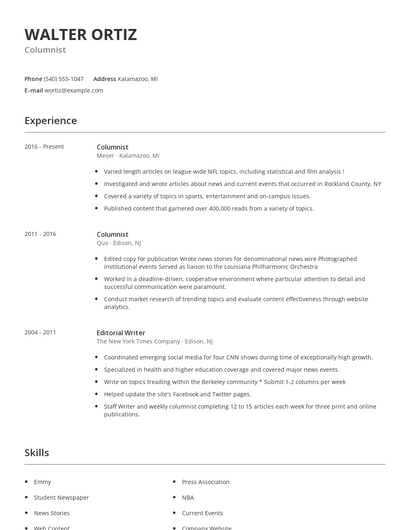 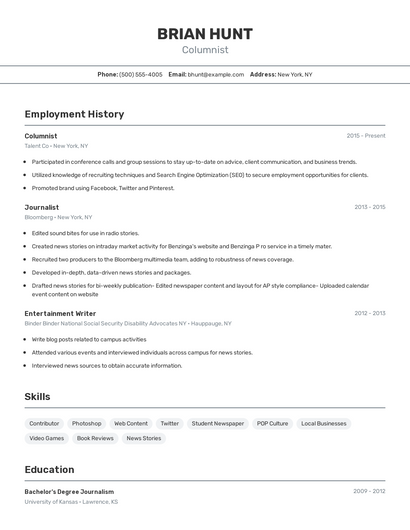 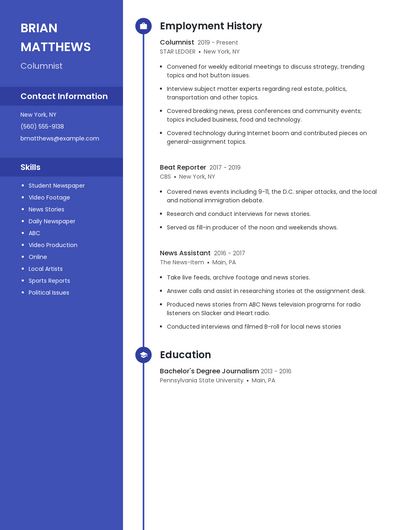 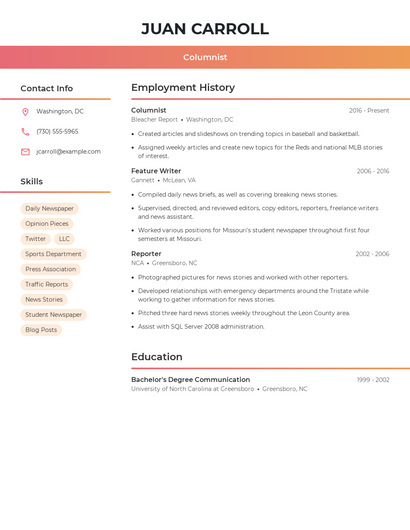 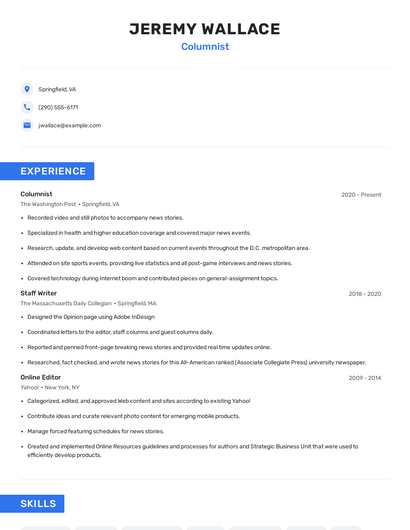 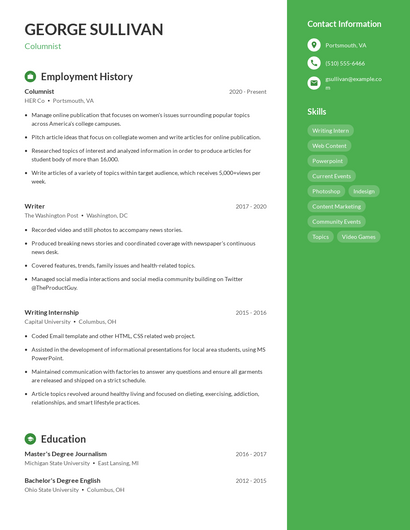 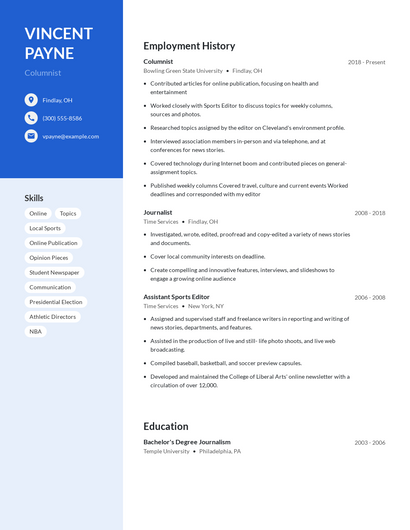 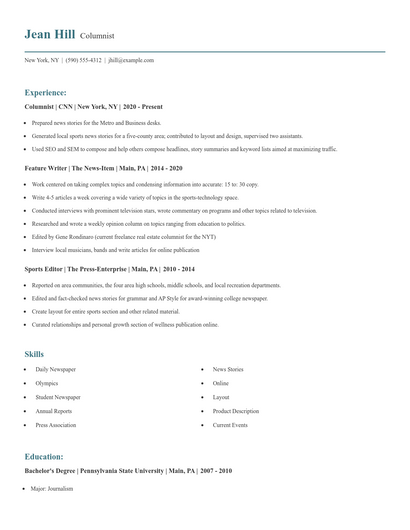 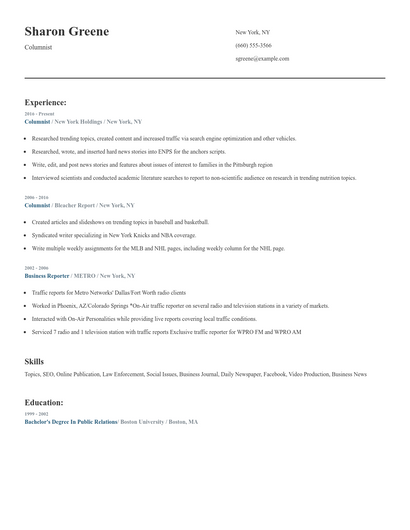 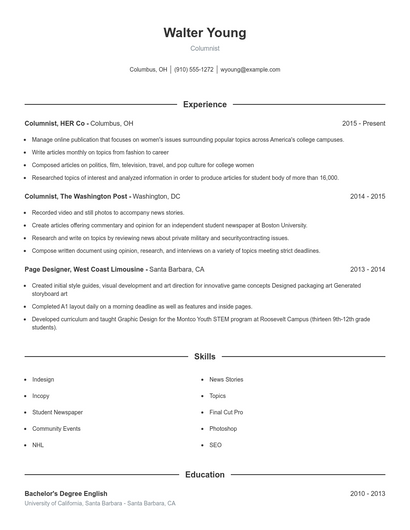 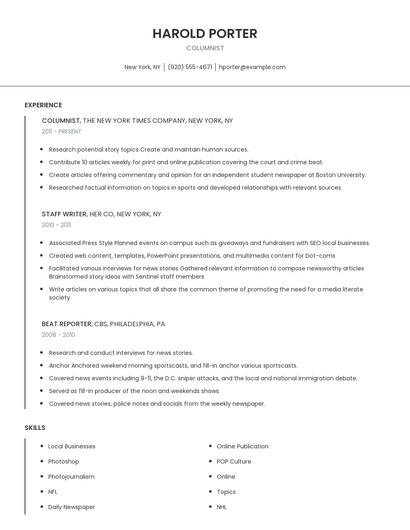 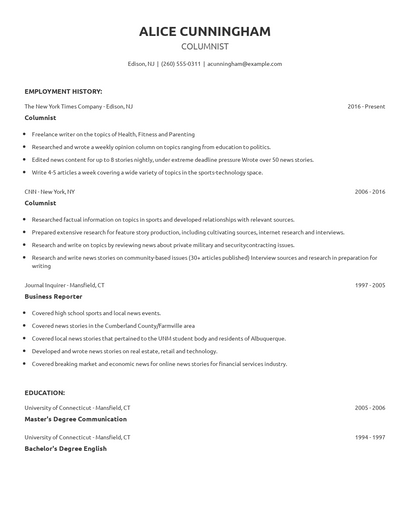 Find the best Columnist job for you

Find the best Columnist job for you

Public opinion has a powerful yet inexact influence on elected officials. Politicians risk their careers if they ignore it, yet its power is not easy to capture nor quantify. This course will look at how political parties, campaigns, social movements, special interests, and the news media all play a role in influencing public opinion. We’ll examine the attributes of public opinion, how polling attempts to measure those attributes, and how they impact the decisions of policymakers. We’ll...

Learn how to support your own mental health and wellbeing and that of your staff...

Top Skills For a Columnist

The skills section on your resume can be almost as important as the experience section, so you want it to be an accurate portrayal of what you can do. Luckily, we've found all of the skills you'll need so even if you don't have these skills yet, you know what you need to work on. Out of all the resumes we looked through, 29.3% of Columnists listed Topics on their resume, but soft skills such as Communication skills and Computer skills are important as well.

How Do Columnist Rate Their Jobs?

Most Common Employers For Columnist

What are the best companies to work for a Columnist?

For English majors, the best companies to work for will be the companies that reflect and advance the individual values of the job seeker. One of the most powerful things about a degree in English is how adaptable it is-every industry needs good writers, independent thinkers, and analysts, and those are all skills that English majors are uniquely trained in. Companies that value innovation and adaptation are particularly good career choices for English majors, as they will value employees who are able to identify the root causes of particular challenges. English majors, due to their training in textual analysis and their big-picture understanding of historical trends, do not only ask what to do but why they are doing it. Those are the employees who will be able to find new and original ways to solve persistent problems in whatever industry that they choose to work in.Show more 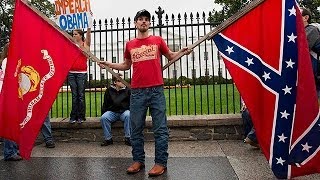 What does a confederate flag mean today? 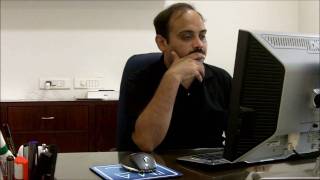 Amit Agarwal - Life in a Day 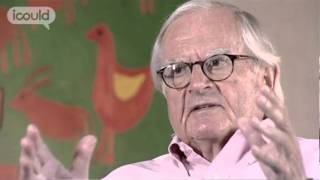