How to Become a Compiler

What is a Compiler

To "compile" is to collect information from various sources to create something, such as a list or report. Therefore, a compiler is someone who does a lot of compiling.

A compiler spends a lot of their workday surrounded by data. This can be survey data, census data, or more specialized data such as geographic or GPS data. The way they compile the data depends on where they work or the task. Some compilers have to compile directories for business owners; others use technical tools such as Geographic Information Systems (GIS) to make maps.

There are many different ways to be a compiler and many different things to compile. Most compilers need computer skills like C++ and critical thinking skills. The compiler needs to be able to take lots of data and arrange it in a way that makes sense and is useful. There's no data for this, but most compilers were probably the kinds of kids who enjoyed arranging blocks by shape in kindergarten.

What Does a Compiler Do

There are certain skills that many Compilers have in order to accomplish their responsibilities. By taking a look through resumes, we were able to narrow down the most common skills for a person in this position. We discovered that a lot of resumes listed Computer skills, Detail oriented and Problem-solving skills.

Learn more about what a Compiler does

How To Become a Compiler

Average Salary for a Compiler

Compilers in America make an average salary of $64,492 per year or $31 per hour. The top 10 percent makes over $145,000 per year, while the bottom 10 percent under $28,000 per year.
Average Salary
$64,492
Find Your Salary Estimate
How much should you be earning as an Compiler? Use Zippia's Salary Calculator to get an estimation of how much you should be earning.
See More Salary Information

Zippia allows you to choose from different easy-to-use Compiler templates, and provides you with expert advice. Using the templates, you can rest assured that the structure and format of your Compiler resume is top notch. Choose a template with the colors, fonts & text sizes that are appropriate for your industry. 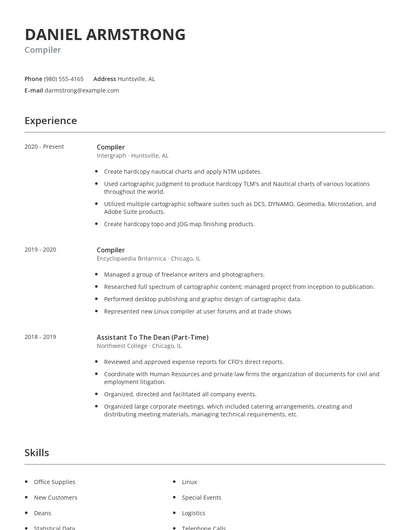 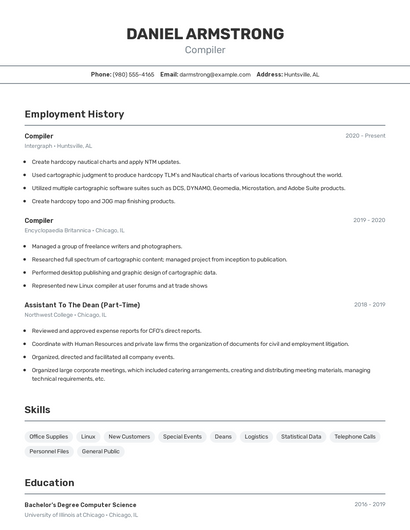 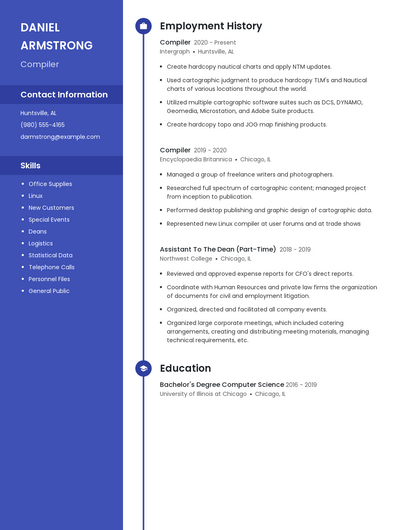 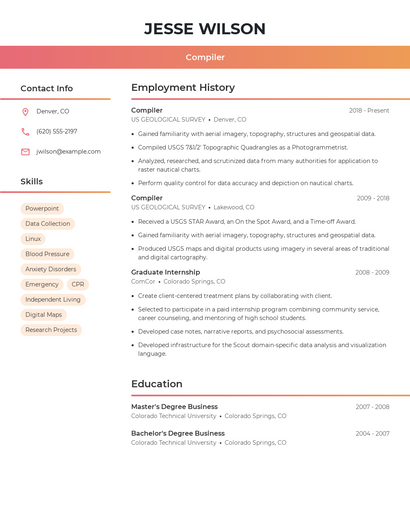 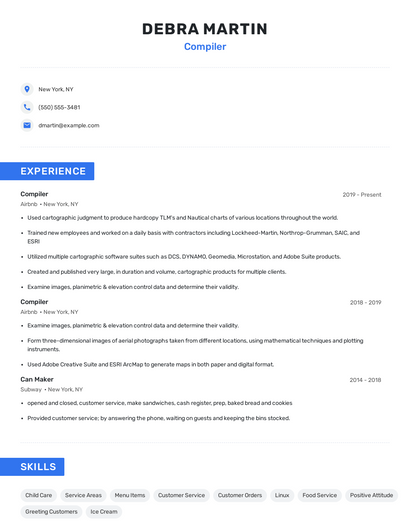 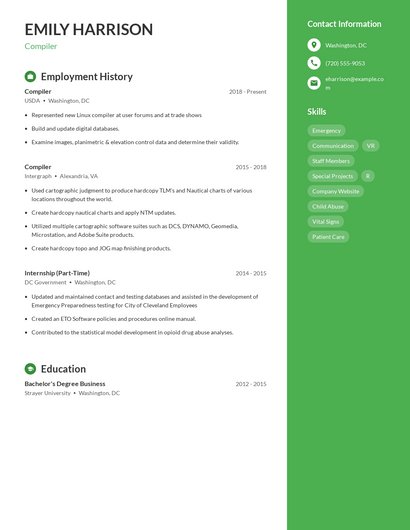 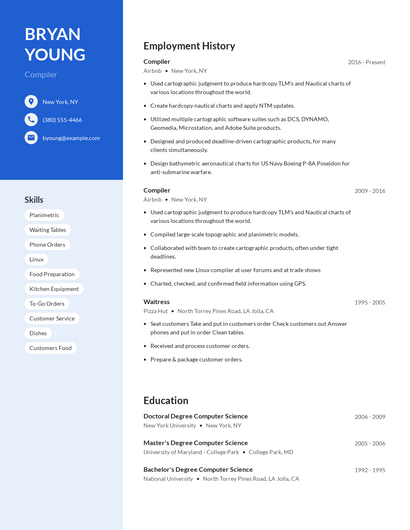 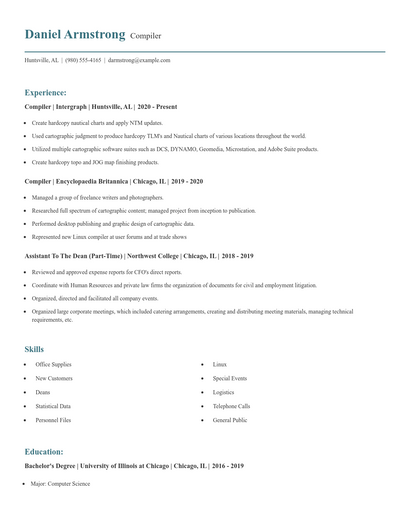 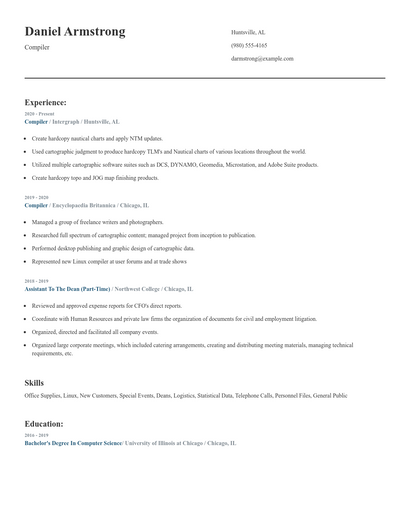 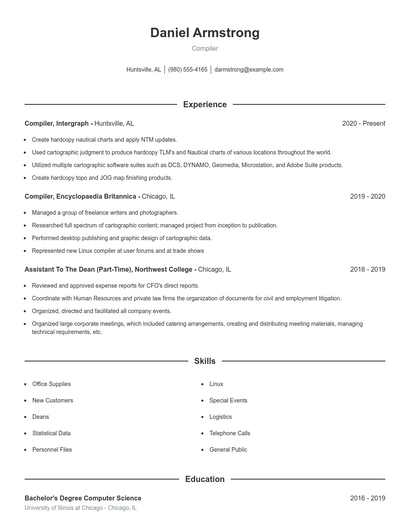 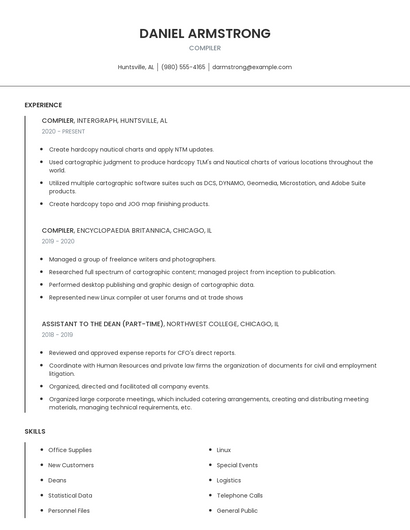 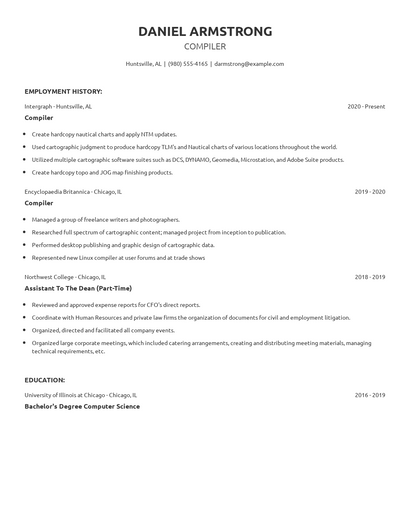 Find the best Compiler job for you

Find the best Compiler job for you

The course lectures will be presented in short videos. To help you master the material, there will be in-lecture questions to answer, quizzes, and two exams: a midterm and a final. There will also be homework in the form of exercises that ask you to show a sequence of logical steps needed to derive a specific result, such as the sequence of steps a type checker would perform to type check a piece of code, or the sequence of steps a parser would perform to parse an input string. This checking...

Thiscoursereviews the basic skills, concepts, and principles required to compile and disseminate macroeconomic and financial statistics. The course covers topics such as residence, institutional units, institutional sectors, accounting rules, financial instruments, stocks and flows, the IMF's Data Standards Initiatives, and presents the basic macroeconomic linkages among these statistics. Compilation Basics for Macroeconomic Statistics (CBMSx) is offered by the IMF with financial support from...

As RISC-V has made it easier to bring up processor chipsets, the need for compiler engineers in the RISC-V ecosystem has increased. There is an implicit need for toolchain experts who can help RISC-V vendors gain an edge over competitors with their expertise in compilation technologies. Learning about internals of the toolchain, building and debugging RISC-V applications will allow you to work with thousands of companies that are building the latest hardware technologies. This course is...

Best States For a Compiler

Some places are better than others when it comes to starting a career as a Compiler. The best states for people in this position are New York, New Jersey, Alaska, and Maryland. Compilers make the most in New York with an average salary of $106,925. Whereas in New Jersey and Alaska, they would average $106,695 and $97,208, respectively. While Compilers would only make an average of $95,217 in Maryland, you would still make more there than in the rest of the country. We determined these as the best states based on job availability and pay. By finding the median salary, cost of living, and using the Bureau of Labor Statistics' Location Quotient, we narrowed down our list of states to these four.

Total Compiler Jobs:
3
Highest 10% Earn:
$190,000
Location Quotient:
0.42
Location Quotient is a measure used by the Bureau of Labor Statistics (BLS) to determine how concentrated a certain industry is in a single state compared to the nation as a whole. You can read more about how BLS calculates location quotients here

Total Compiler Jobs:
0
Highest 10% Earn:
$190,000
Location Quotient:
0
Location Quotient is a measure used by the Bureau of Labor Statistics (BLS) to determine how concentrated a certain industry is in a single state compared to the nation as a whole. You can read more about how BLS calculates location quotients here

Total Compiler Jobs:
1
Highest 10% Earn:
$152,000
Location Quotient:
2.17
Location Quotient is a measure used by the Bureau of Labor Statistics (BLS) to determine how concentrated a certain industry is in a single state compared to the nation as a whole. You can read more about how BLS calculates location quotients here

How Do Compiler Rate Their Jobs?

Most Common Employers For Compiler