How to Become a Department Manager

What is a Department Manager

A department manager is someone who has certain responsibilities over a certain area in a store or within an organization. Take a department store in the mall for example. Each store has several departments which are split up so the store runs efficiently on all ends.

Maybe you'll be the department manager for the kids section in a store at the mall or the electronics section at a Target or Walmart. Wherever you end up, your responsibilities are very similar. You'll be in charge of the area that you're assigned. Which means you're in charge of the team who works within that area.

As department manager, you get to hire and fire individuals, as well as set goals for the team to hit. You'll even be in charge of the department's budget, although a source higher up in the company will need to approve it. And, as long as your team is meeting goals and creating success, then your role as a department manager will be simple.

There is more than meets the eye when it comes to being a Department Manager. For example, did you know that they make an average of $24.91 an hour? That's $51,807 a year!

What Does a Department Manager Do

There are certain skills that many Department Managers have in order to accomplish their responsibilities. By taking a look through resumes, we were able to narrow down the most common skills for a person in this position. We discovered that a lot of resumes listed Analytical skills, Customer-service skills and Communication skills.

Learn more about what a Department Manager does

How To Become a Department Manager

In addition to switching up your job search, it might prove helpful to look at a career path for your specific job. Now, what's a career path you ask? Well, it's practically a map that shows how you might advance from one job title to another. Our career paths are especially detailed with salary changes. So, for example, if you started out with the role of Store Manager you might progress to a role such as District Manager eventually. Later on in your career, you could end up with the title District Manager.

Average Salary for a Department Manager

Department Managers in America make an average salary of $51,807 per year or $25 per hour. The top 10 percent makes over $90,000 per year, while the bottom 10 percent under $29,000 per year.
Average Salary
$51,807
Find Your Salary Estimate
How much should you be earning as an Department Manager? Use Zippia's Salary Calculator to get an estimation of how much you should be earning.
See More Salary Information

Learn How To Write a Department Manager Resume

At Zippia, we went through countless Department Manager resumes and compiled some information about how to optimize them. Here are some suggestions based on what we found, divided by the individual sections of the resume itself.

Zippia allows you to choose from different easy-to-use Department Manager templates, and provides you with expert advice. Using the templates, you can rest assured that the structure and format of your Department Manager resume is top notch. Choose a template with the colors, fonts & text sizes that are appropriate for your industry. 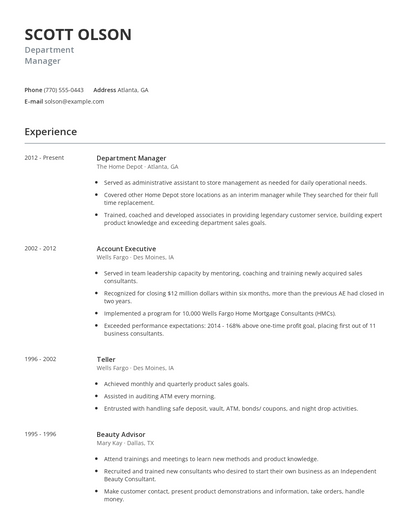 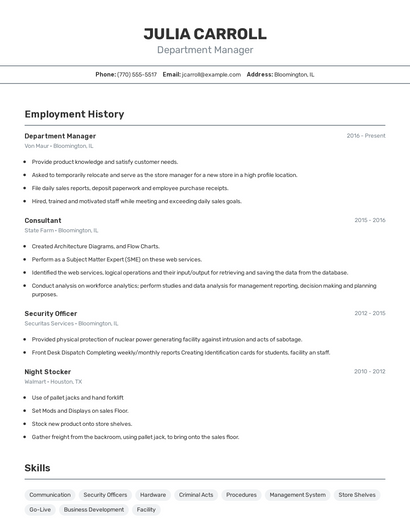 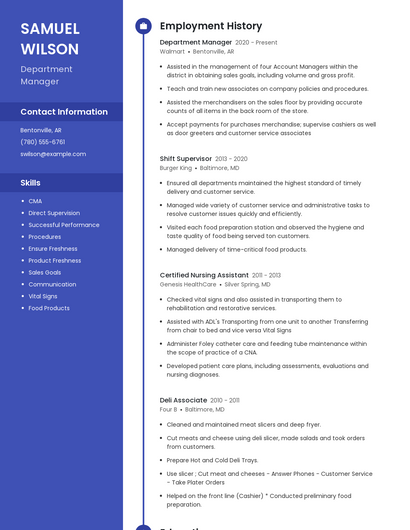 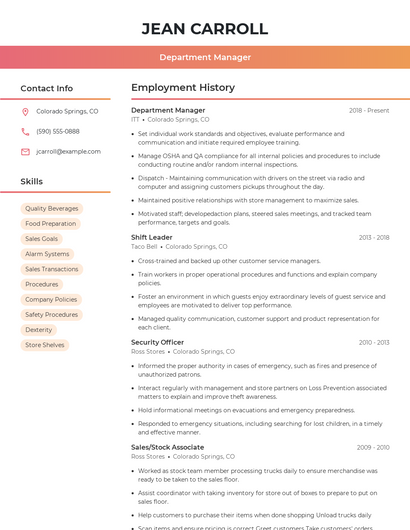 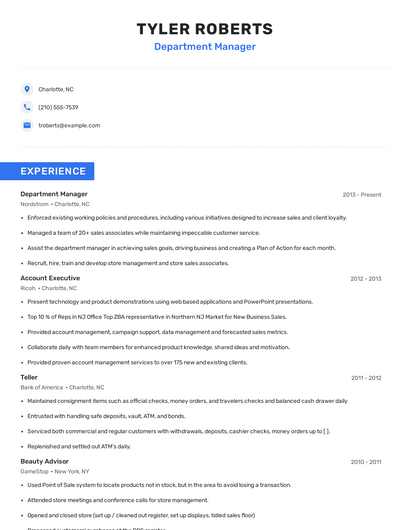 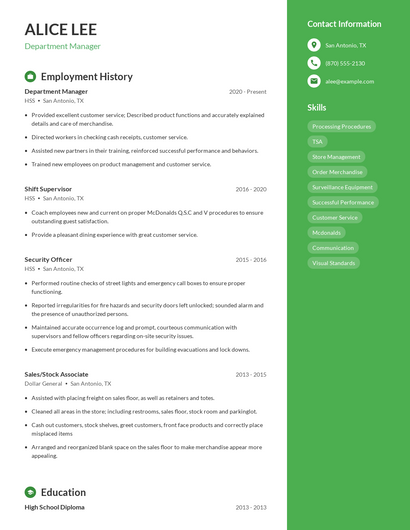 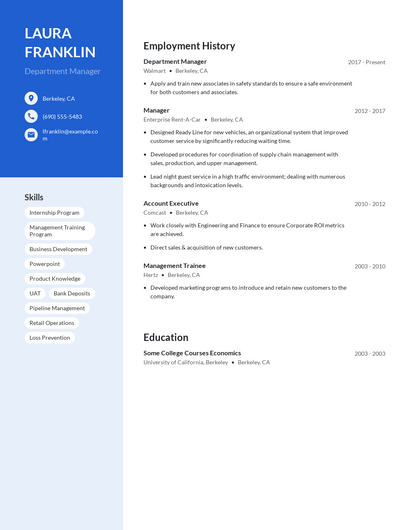 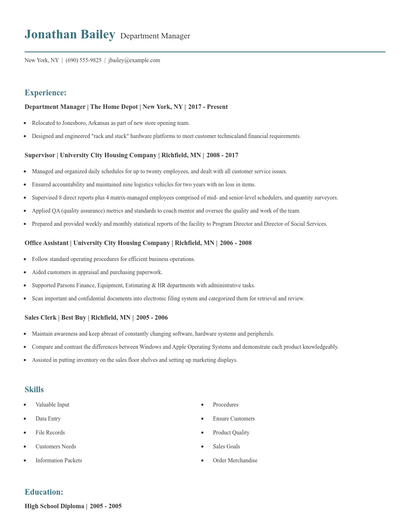 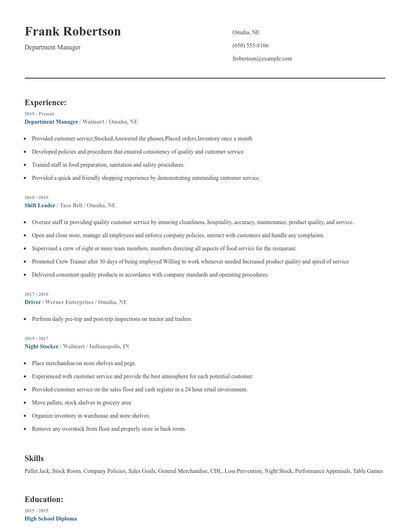 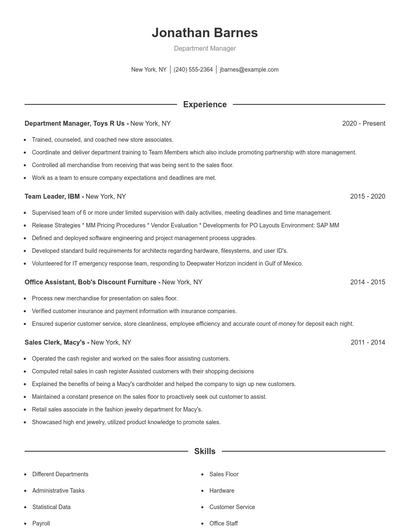 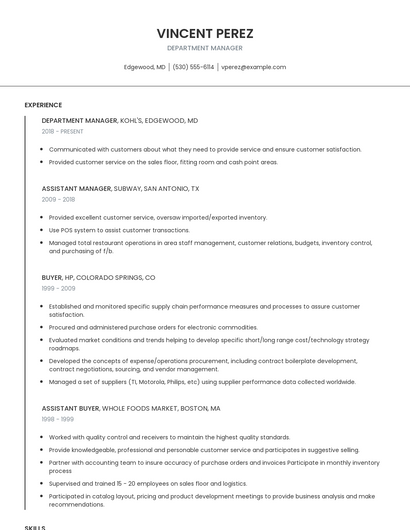 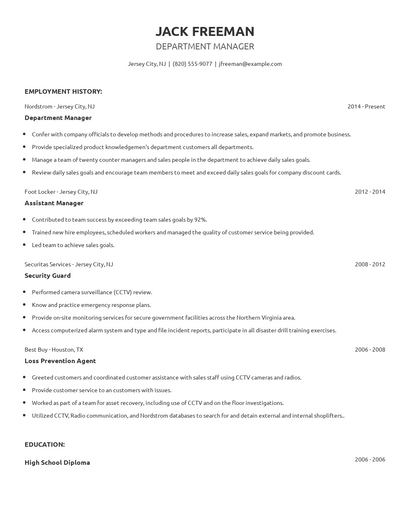 Find the best Department Manager job for you

Find the best Department Manager job for you

Online Courses For Department Manager That You May Like

Inventory is also company money, materialized in supplies towards the elaboration of products in-process, finished and for sale. Keeping an organized and updated inventory will allow you to save time and resources. Also, knowing that type of product you have available and what state it is in helps in organizing what you already have, so you will not have waste and you will be able to sell as you produce. Inventory is a hidden treasure for companies. In this online course you will learn to...

Top Skills For a Department Manager

The skills section on your resume can be almost as important as the experience section, so you want it to be an accurate portrayal of what you can do. Luckily, we've found all of the skills you'll need so even if you don't have these skills yet, you know what you need to work on. Out of all the resumes we looked through, 50.6% of Department Managers listed Procedures on their resume, but soft skills such as Analytical skills and Customer-service skills are important as well.

Best States For a Department Manager

Some places are better than others when it comes to starting a career as a Department Manager. The best states for people in this position are New Jersey, New York, Rhode Island, and Connecticut. Department Managers make the most in New Jersey with an average salary of $117,680. Whereas in New York and Rhode Island, they would average $108,624 and $95,169, respectively. While Department Managers would only make an average of $94,481 in Connecticut, you would still make more there than in the rest of the country. We determined these as the best states based on job availability and pay. By finding the median salary, cost of living, and using the Bureau of Labor Statistics' Location Quotient, we narrowed down our list of states to these four.

Total Department Manager Jobs:
3,153
Highest 10% Earn:
$201,000
Location Quotient:
1.09
Location Quotient is a measure used by the Bureau of Labor Statistics (BLS) to determine how concentrated a certain industry is in a single state compared to the nation as a whole. You can read more about how BLS calculates location quotients here

Total Department Manager Jobs:
5,090
Highest 10% Earn:
$189,000
Location Quotient:
1.09
Location Quotient is a measure used by the Bureau of Labor Statistics (BLS) to determine how concentrated a certain industry is in a single state compared to the nation as a whole. You can read more about how BLS calculates location quotients here

Total Department Manager Jobs:
1,304
Highest 10% Earn:
$167,000
Location Quotient:
1.08
Location Quotient is a measure used by the Bureau of Labor Statistics (BLS) to determine how concentrated a certain industry is in a single state compared to the nation as a whole. You can read more about how BLS calculates location quotients here

How Do Department Manager Rate Their Jobs?

What do you like the most about working as Department Manager?

Most Common Employers For Department Manager

How long does it take to become a Department Manager?

Have more questions? See all answers to common sales questions.