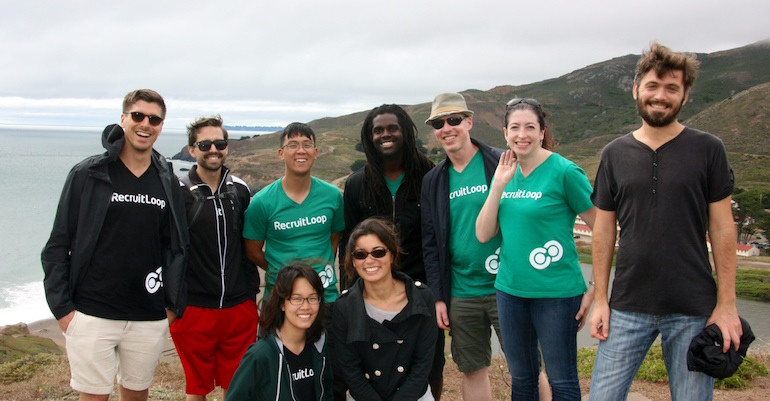 by Michael Overell
RecruitLoop - 5 years ago

We’ve welcomed a lot of new faces to RecruitLoop over the past 3 months. It’s been a hectic time of on-boarding, training, building furniture, and hazing (the friendly kind).

Most of these guys are already up to speed, and working with clients and members of our community. It’s past time to introduce them publicly!

Rory founded TEDxReno. He likes dogs. And sport. Especially the 49ers. In fact, his dog wears a 49ers bow tie. Before RecruitLoop, he worked remotely with a web development firm from the Ukraine. He lost that job when Russia invaded. Sad but true story; though lucky for us.

Kendra calls herself a Silicon Valley baby – literally. She grew up in San Jose, the product of an IBM + Intel couple. She also grew up around HR – her mom and brother are both in the space. Most recently, she was on-site at Google, managing Contingent Workforce sourcing, hiring, and performance management specifically for People Ops (primarily Staffing).

Calvin joined RecruitLoop after a few years in sales at an electronic and components distributor. He grew up in San Jose, and studied at UCLA. Doesn’t drink, but there’s nothing he won’t eat – including guinea pig on a recent trip to Peru. Addicted to baclava.

Chad studied undergrad at University of Wisconsin-Madison and la Universidad de Sevilla. He learnt sales at CDW in Chicago, before heading to business school in France. He’s a world traveller, speaks 3 languages, and makes a mean pizza. #alwayshustling

Jeff just moved to San Francisco from Reno, Nevada, where he studied Finance and Economics. He spent a semester abroad in San Sebastian, and travelled Europe extensively. He’s a keen snowboarder, football fan, and occasionally dabbles in parkour.

Miki is San Francisco native (the only one on the team!). Her vague title is matched by her diverse interests: anthropology, digital storytelling, development, dancing (salsa), knitting, and running.

Marin moved to San Francisco from Washington State. His budding career in motocross was cut short by an accident. Now he sticks to live music, Korea food and building software. This is his only known photograph.

It’s incredibly exciting to see a team grow in this way. You’ll be seeing and experiencing the impact of each of these guys in different ways over the next few months.

Stay tuned for a few other faces in the coming weeks.  And check out our other open roles!