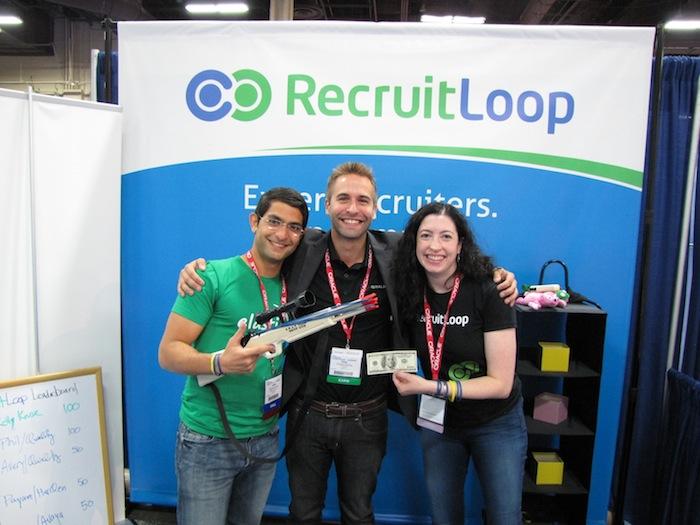 Well, THAT Was Awesome: 2013 HR Tech Conference in Review

Wow, was that fun. So fun that we had to recover for a long weekend before posting our 2013 HR Tech Conference recap. 🙂

This was our first time exhibiting (or even attending) the HR Tech Conference, and first we want to publicly thank everyone (especially Bill Kutik, of course) for making it an amazing experience.

And the winners are…

If you stopped by our booth at the conference, you may have taken a shot with our rubber band guns (which went along with our Elastic Recruiting theme), and you may even have landed on our leaderboard.

After a very competitive shoot-out by the two people tied for first place at the end of the conference (that went into multiple rounds), our winner was Phil Noelting, President of Qwalify. The runner-up was Kelly Kruse, Principal at KK360.

Here’s a picture of our winner with his non-stretchy (and real!) $100 bill (Phil is in the middle – Nima and Jenn are surrounding him):

We’ve also been asked a TON about how to get those really cool rubber band guns. Well, Amazon, of course.

We also held a drawing for 10 FREE hours of an expert recruiter’s time (a $1000 value). The winner of that was Douglas Golenski, Associate Director East Region – Cloud Services at Cognizant – congratulations!

We don’t impress easily, but…

As we said, this was our first time exhibiting, and we met some completely awesome people. We were especially impressed by three things:

Breadth. We saw a staggering array of HR Technology and the companies who consume it. Every imaginable aspect of the HR process was well represented, and we saw some really interesting platform solutions. We also appreciated the meta-aspect of the conference, where our fellow exhibitors both produced and consumed each others’ technology & solutions!

Our fellow exhibitors. Especially Mangrove Software, TalentFirst, and HR Cloud, who all ended up getting hit by rubber bands occasionally and were great sports about it!

Best feedback ever. One thing we appreciated was the sheer honesty of everyone who stopped by our booth. Whether folks thought that we had the best idea since sliced bread with this Elastic Recruiting thing or they thought the absolute opposite, they were honest.

We’re looking forward to continuing a lot of conversations over the weeks and months to come. Congratulations again to our winners, and see you there again next year!

Introducing Sourcing as a Service
Latest video: How RecruitLoop works in under 2 minutes
Top 12 Blog Posts of 2012
Vote for the RecruitLoop Blog in the 2012 Best Australian Blogs Competition
RecruitLoop Launches With Good News for Employers in Uncertain Times
Breaking: Car Park Client and Candidate Capers