How to Become an Endocrinologist

What is an Endocrinologist

Endocrinology is an aspect of biology and medicine which deals with the endocrine system. An endocrinologist, therefore, is a doctor that treats diseases associated with hormones. Hormones are chemical messengers produced in the endocrine glands and are carried by the blood to the different parts of the body where they are needed.

An Endocrinologist's responsibilities include disease diagnosis, infertility, hypothyroidism, and treatment. They also call for a specific test to be performed on patients and interpret the results. The endocrinologist researches the endocrine system and the diseases for the best way to treat them. An endocrinologist must possess problem-solving skills, empathy, excellent communication skills, and outstanding organizational skills.

Endocrinology is a profitable career as you can make an average of $201,447 per year. To become an endocrinologist, you must be first trained in either medicine, gynecology, or pediatrics, after which you will now specialize in endocrinology. In the US, this training takes four years in college, another four years in medical school, three years as a resident doctor, and two years of fellowship.

What Does an Endocrinologist Do

There are certain skills that many Endocrinologists have in order to accomplish their responsibilities. By taking a look through resumes, we were able to narrow down the most common skills for a person in this position. We discovered that a lot of resumes listed Communication skills, Detail oriented and Dexterity.

Learn more about what an Endocrinologist does

How To Become an Endocrinologist

Average Salary for an Endocrinologist

Endocrinologists in America make an average salary of $219,663 per year or $106 per hour. The top 10 percent makes over $362,000 per year, while the bottom 10 percent under $133,000 per year.
Average Salary
$219,663
Find Your Salary Estimate
How much should you be earning as an Endocrinologist? Use Zippia's Salary Calculator to get an estimation of how much you should be earning.
See More Salary Information

Zippia allows you to choose from different easy-to-use Endocrinologist templates, and provides you with expert advice. Using the templates, you can rest assured that the structure and format of your Endocrinologist resume is top notch. Choose a template with the colors, fonts & text sizes that are appropriate for your industry. 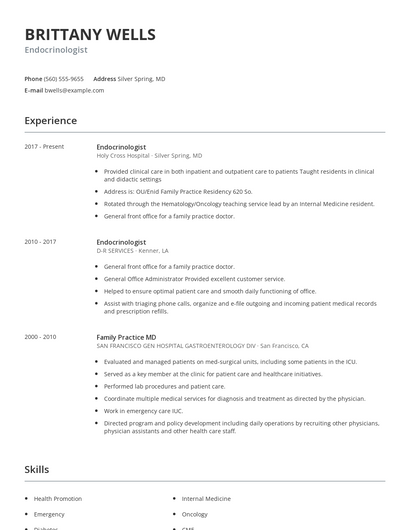 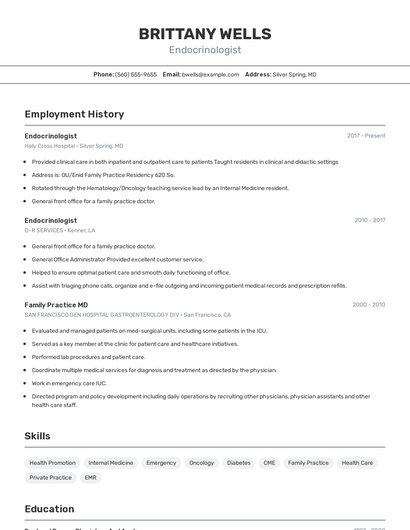 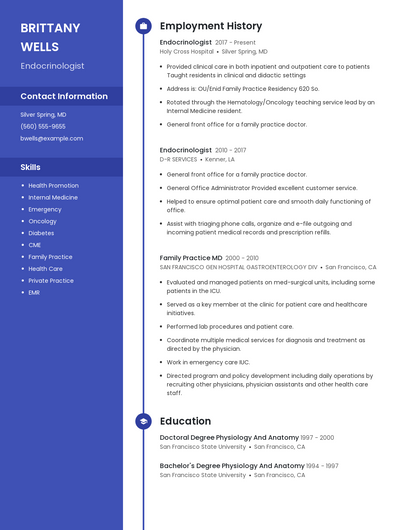 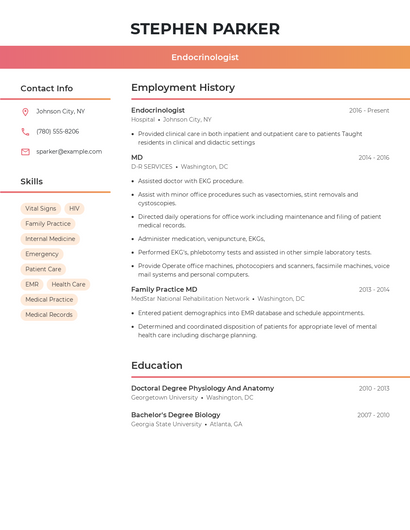 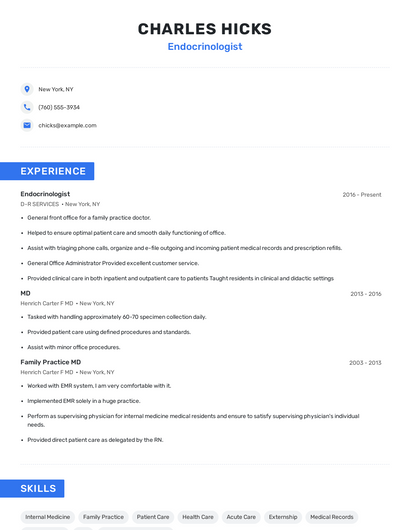 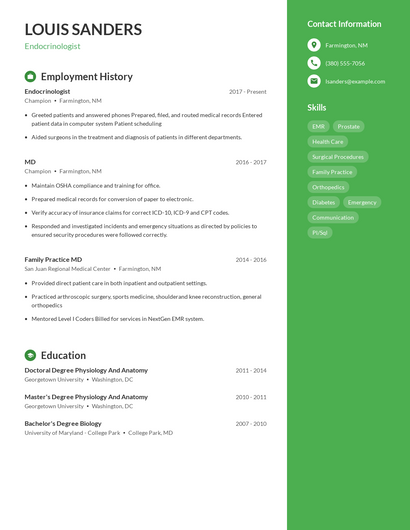 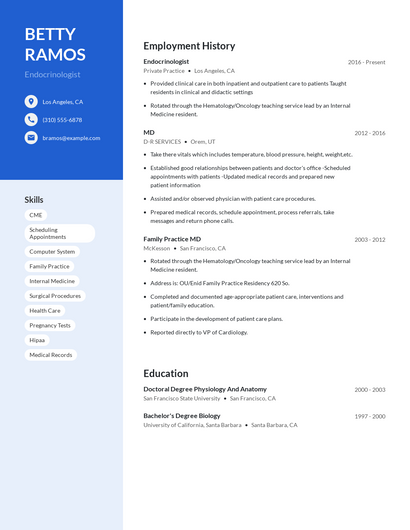 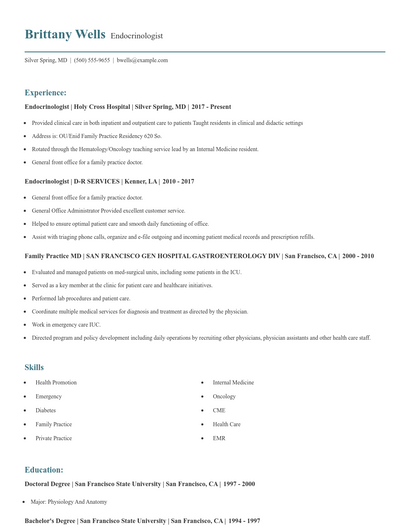 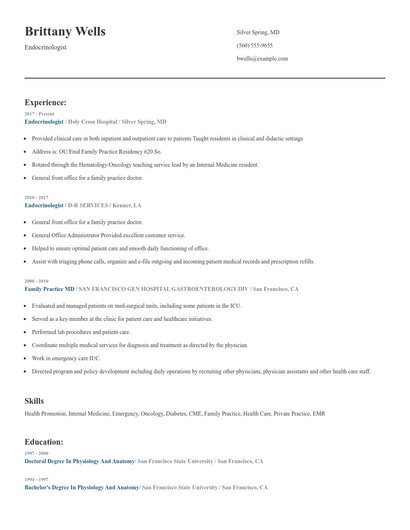 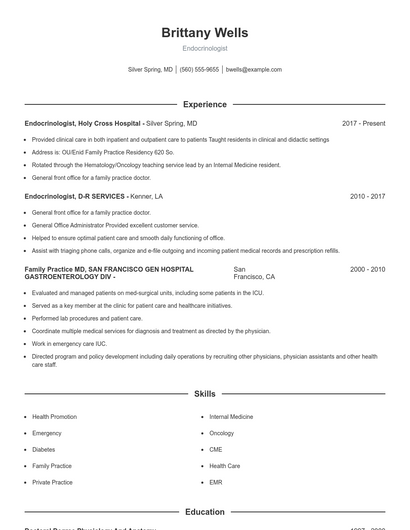 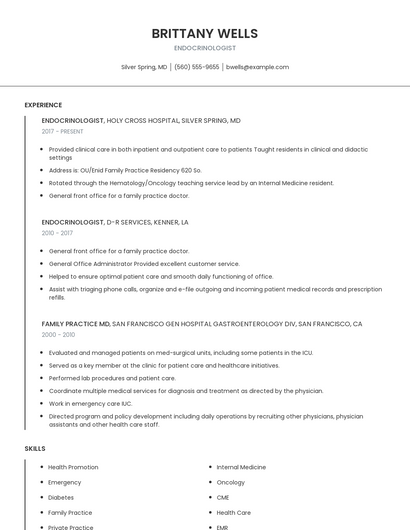 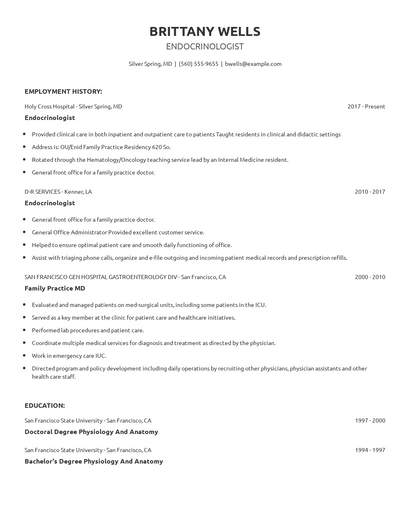 Find the best Endocrinologist job for you

Find the best Endocrinologist job for you

Kidney transplantation is a major advance of modern medicine which provides high-quality of life for patients with end-stage renal disease. What used to be an experimental, risky, and very limited treatment option more than 50 years ago is now routinely performed in many countries worldwide. The number of renal transplants is expected to rise sharply in the next decade since the proportion of patients with end stage renal disease is increasing. Are you interested in clinical kidney, pancreas and...

Top Skills For an Endocrinologist

The skills section on your resume can be almost as important as the experience section, so you want it to be an accurate portrayal of what you can do. Luckily, we've found all of the skills you'll need so even if you don't have these skills yet, you know what you need to work on. Out of all the resumes we looked through, 76.1% of Endocrinologists listed Internal Medicine on their resume, but soft skills such as Communication skills and Detail oriented are important as well.

Best States For an Endocrinologist

Some places are better than others when it comes to starting a career as an Endocrinologist. The best states for people in this position are Alaska, North Dakota, South Dakota, and Montana. Endocrinologists make the most in Alaska with an average salary of $247,906. Whereas in North Dakota and South Dakota, they would average $225,499 and $219,829, respectively. While Endocrinologists would only make an average of $219,731 in Montana, you would still make more there than in the rest of the country. We determined these as the best states based on job availability and pay. By finding the median salary, cost of living, and using the Bureau of Labor Statistics' Location Quotient, we narrowed down our list of states to these four.

Total Endocrinologist Jobs:
9
Highest 10% Earn:
$294,000
Location Quotient:
3
Location Quotient is a measure used by the Bureau of Labor Statistics (BLS) to determine how concentrated a certain industry is in a single state compared to the nation as a whole. You can read more about how BLS calculates location quotients here

Total Endocrinologist Jobs:
7
Highest 10% Earn:
$285,000
Location Quotient:
1.69
Location Quotient is a measure used by the Bureau of Labor Statistics (BLS) to determine how concentrated a certain industry is in a single state compared to the nation as a whole. You can read more about how BLS calculates location quotients here

Total Endocrinologist Jobs:
40
Highest 10% Earn:
$279,000
Location Quotient:
2.01
Location Quotient is a measure used by the Bureau of Labor Statistics (BLS) to determine how concentrated a certain industry is in a single state compared to the nation as a whole. You can read more about how BLS calculates location quotients here

How Do Endocrinologist Rate Their Jobs?

Most Common Employers For Endocrinologist