How to Become a Freelance Producer

What is a Freelance Producer

A freelance producer has almost the same job description as a regular producer, except that they are not tied down to one company and generally have more freedom to pick who they want to work with. A freelance producer can be for film, music, photography, and many other types of media and arts.

The duties of a freelance producer vary depending on their type of work, but in general, they spend most of their time meeting with clients to discuss the job, sourcing talent and vendors, developing production plans, collaborating with other creatives involved in the project, and overseeing the actual production of the project.

The best degree to become a freelance producer depends on the industry, such as a bachelor's degree in music for a music producer. However, a college degree is not always necessary for this job, with a lot of freelance producers having only high school diplomas or even less than that. In this type of job, what's more important is experience, skill, and, of course, creativity.

There is more than meets the eye when it comes to being a Freelance Producer. For example, did you know that they make an average of $49.93 an hour? That's $103,864 a year!

What Does a Freelance Producer Do

There are certain skills that many Freelance Producers have in order to accomplish their responsibilities. By taking a look through resumes, we were able to narrow down the most common skills for a person in this position. We discovered that a lot of resumes listed Communication skills, Leadership skills and Time-management skills.

How To Become a Freelance Producer

In addition to switching up your job search, it might prove helpful to look at a career path for your specific job. Now, what's a career path you ask? Well, it's practically a map that shows how you might advance from one job title to another. Our career paths are especially detailed with salary changes. So, for example, if you started out with the role of Producer you might progress to a role such as Owner eventually. Later on in your career, you could end up with the title Marketing And Creative Director.

Average Salary for a Freelance Producer

Freelance Producers in America make an average salary of $103,864 per year or $50 per hour. The top 10 percent makes over $195,000 per year, while the bottom 10 percent under $55,000 per year.
Average Salary
$103,864
Find Your Salary Estimate
How much should you be earning as an Freelance Producer? Use Zippia's Salary Calculator to get an estimation of how much you should be earning.

Learn How To Write a Freelance Producer Resume

At Zippia, we went through countless Freelance Producer resumes and compiled some information about how to optimize them. Here are some suggestions based on what we found, divided by the individual sections of the resume itself.

Zippia allows you to choose from different easy-to-use Freelance Producer templates, and provides you with expert advice. Using the templates, you can rest assured that the structure and format of your Freelance Producer resume is top notch. Choose a template with the colors, fonts & text sizes that are appropriate for your industry. 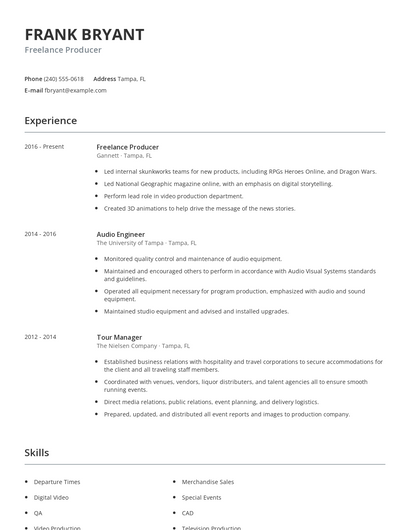 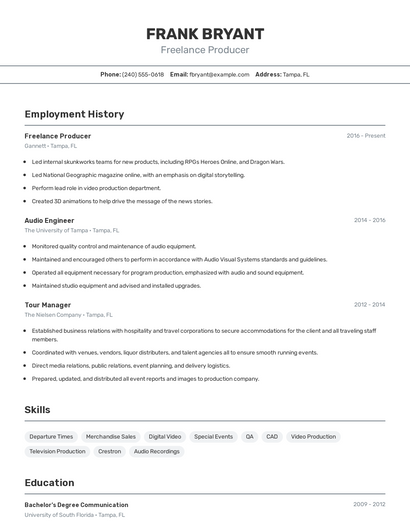 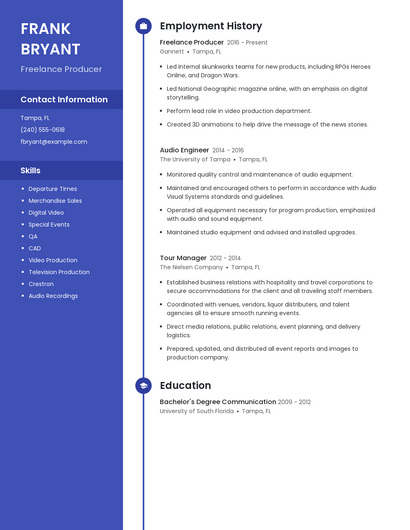 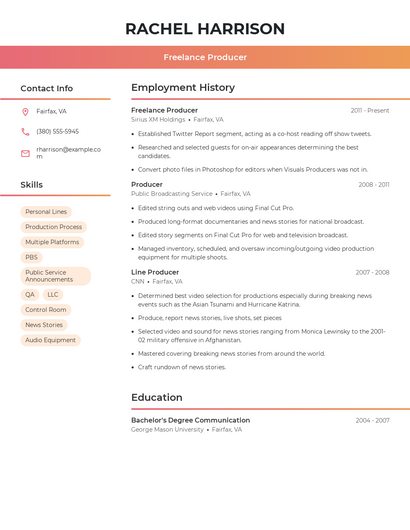 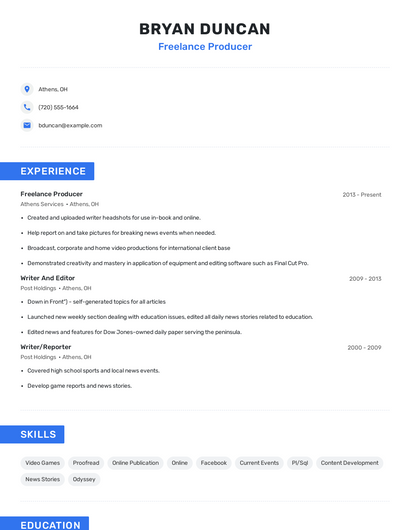 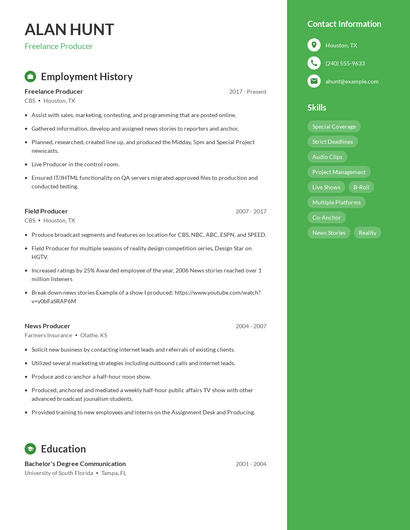 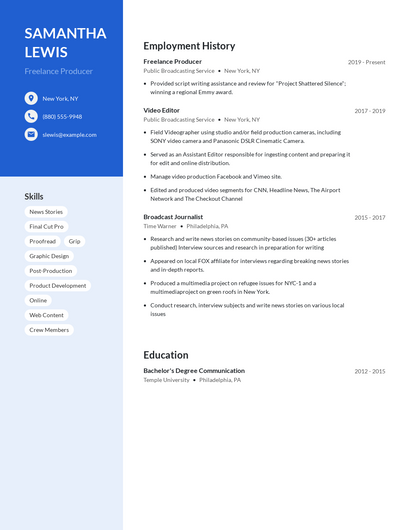 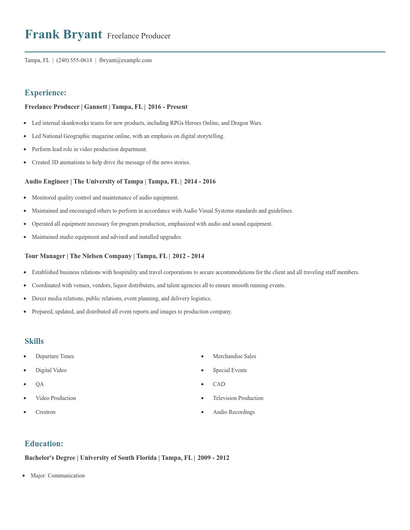 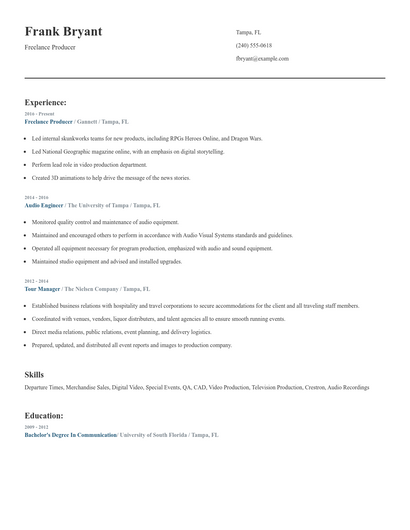 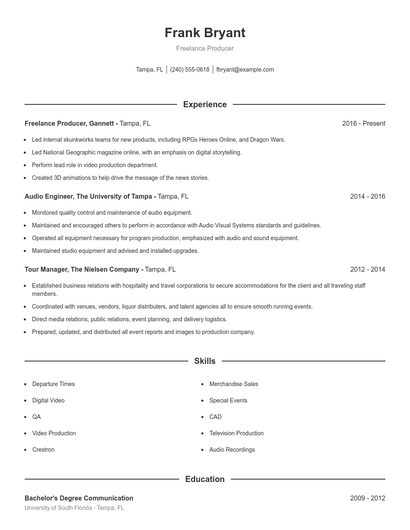 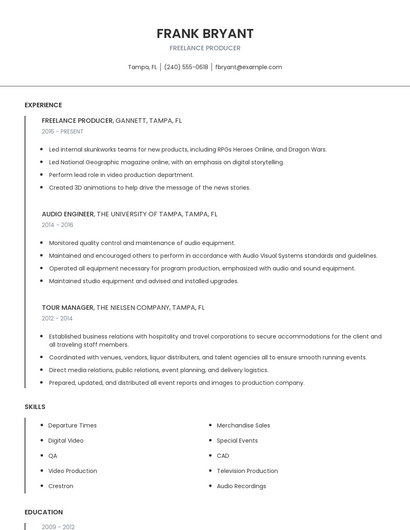 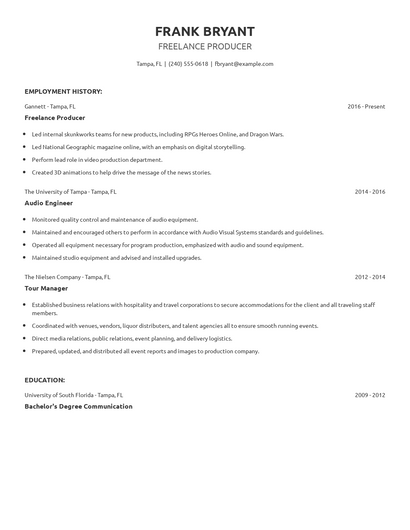 Find the best Freelance Producer job for you

Find the best Freelance Producer job for you

Online Courses For Freelance Producer That You May Like

Learning Final Cut Pro X. A detailed course aimed at teaching users how to use FCP X on the Mavericks or Yosemite OS...

Learn how to edit video in Final Cut Pro X...

Top Skills For a Freelance Producer

The skills section on your resume can be almost as important as the experience section, so you want it to be an accurate portrayal of what you can do. Luckily, we've found all of the skills you'll need so even if you don't have these skills yet, you know what you need to work on. Out of all the resumes we looked through, 18.7% of Freelance Producers listed Music Videos on their resume, but soft skills such as Communication skills and Leadership skills are important as well.

How Do Freelance Producer Rate Their Jobs?

Most Common Employers For Freelance Producer 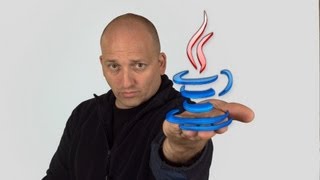 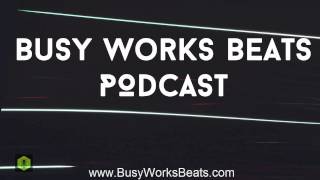 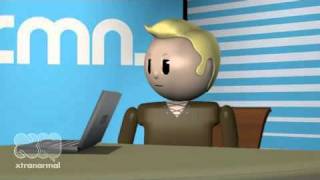 That Is What I Do. Production Manager vs. Freelance Camera Operator