How to Become a General Cleaner

What is a General Cleaner

General cleaners are the unsung heroes of any facility or establishment. They are responsible for maintaining the cleanliness of the premises, which helps keep employees comfortable, healthy, and thus, productive. Sometimes, general cleaners are also referred to as janitors, maintenance personnel, or custodians.

The duties of a general cleaner are quite straightforward. In essence, they are in charge of performing cleaning tasks, such as vacuuming carpets, mopping floors, wiping down surfaces, collecting trash, and cleaning bathrooms. More than these, they may also be expected to conduct small maintenance tasks, such as changing lightbulbs and repairing small appliances.

Typically, employers only require a high school diploma or GED for this role. However, some employers do not require any educational attainment at all since this job can be done with basic training. They do, however, require an adequate level of fitness because this job entails a lot of physical activity.

On average, general cleaners make $11 an hour or roughly $22,000 per year. Job opportunities, on the other hand, remain abundant as every company requires a cleaning staff to maintain their facilities.

There is more than meets the eye when it comes to being a General Cleaner. For example, did you know that they make an average of $12.61 an hour? That's $26,236 a year!

What Does a General Cleaner Do

There are certain skills that many General Cleaners have in order to accomplish their responsibilities. By taking a look through resumes, we were able to narrow down the most common skills for a person in this position. We discovered that a lot of resumes listed Interpersonal skills, Mechanical skills and Physical strength.

Learn more about what a General Cleaner does

How To Become a General Cleaner

As you move along in your career, you may start taking on more responsibilities or notice that you've taken on a leadership role. Using our career map, a General Cleaner can determine their career goals through the career progression. For example, they could start out with a role such as Home Health Aid, progress to a title such as Technician and then eventually end up with the title Maintenance Director.

Average Salary for a General Cleaner

General Cleaners in America make an average salary of $26,236 per year or $13 per hour. The top 10 percent makes over $32,000 per year, while the bottom 10 percent under $20,000 per year.
Average Salary
$26,236
Find Your Salary Estimate
How much should you be earning as an General Cleaner? Use Zippia's Salary Calculator to get an estimation of how much you should be earning.
See More Salary Information

Learn How To Write a General Cleaner Resume

At Zippia, we went through countless General Cleaner resumes and compiled some information about how to optimize them. Here are some suggestions based on what we found, divided by the individual sections of the resume itself.

Zippia allows you to choose from different easy-to-use General Cleaner templates, and provides you with expert advice. Using the templates, you can rest assured that the structure and format of your General Cleaner resume is top notch. Choose a template with the colors, fonts & text sizes that are appropriate for your industry. 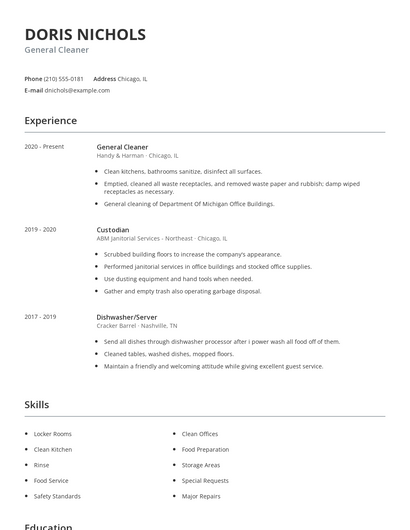 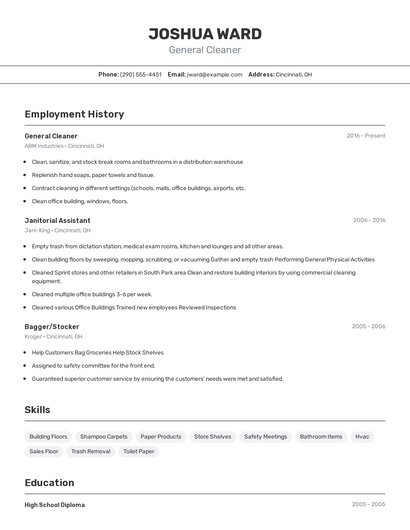 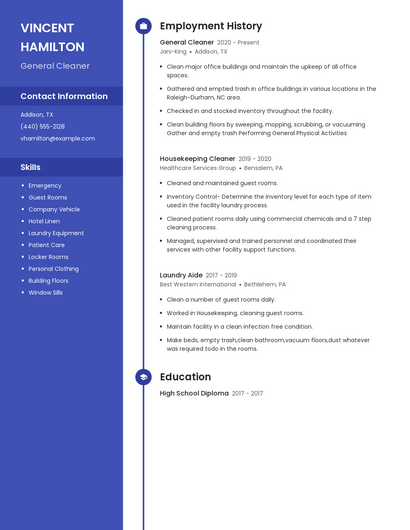 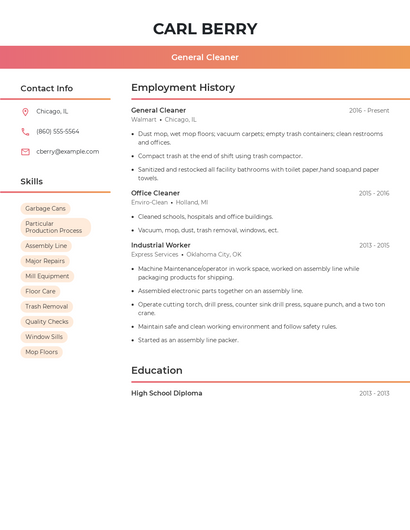 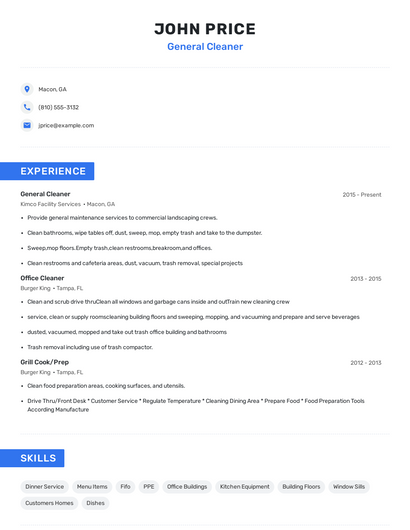 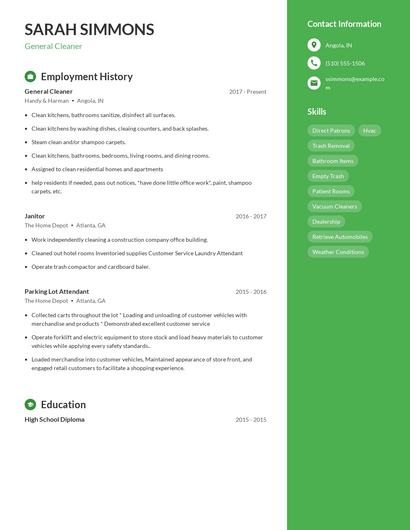 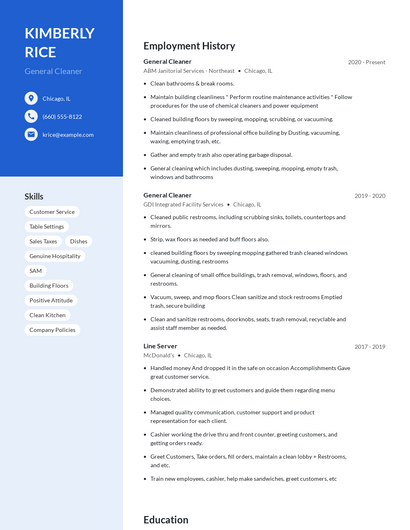 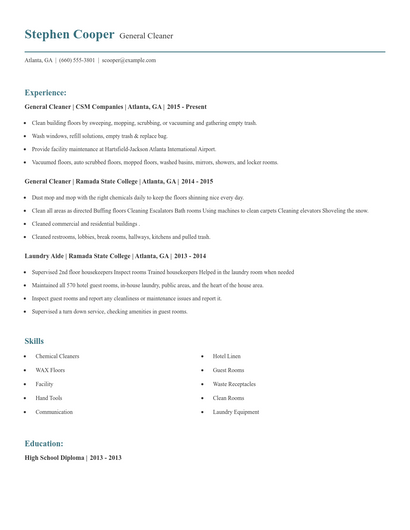 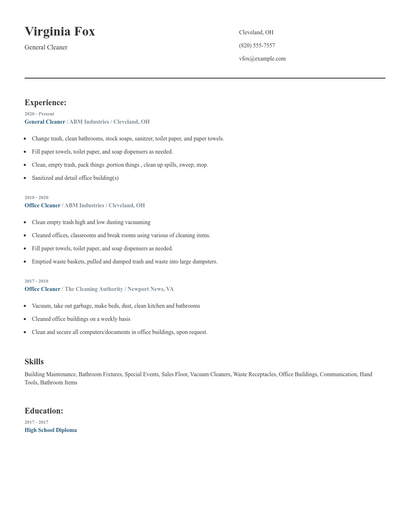 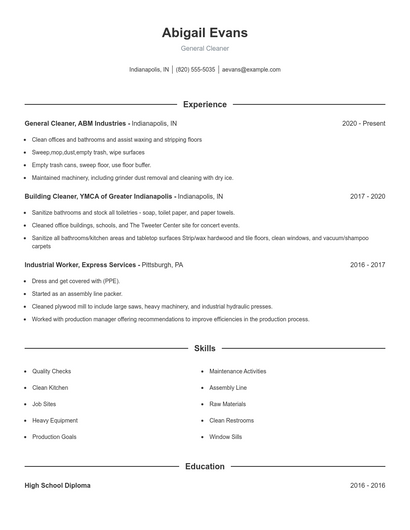 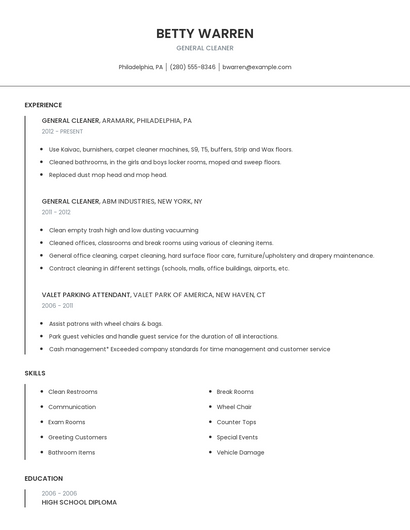 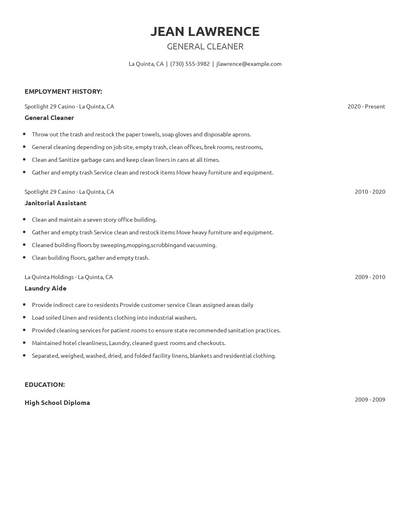 Find the best General Cleaner job for you

Find the best General Cleaner job for you

Online Courses For General Cleaner That You May Like

You Can Quickly Learn the Skills and Knowledge on How to Run Your Own Highly Successful Office Cleaning Business...

View Details on Udemy
Why Move Towards Cleaner Power

This course looks at how increasing greenhouse gases are warming the climate and what it means to decarbonise - reduce the greenhouse gas intensity of - the power sector. It will also provide a range of arguments in favour of decarbonisation, including consideration of &nbsp;ease of access to a secure and affordable energy supply and improvements to health and the environment.This course gathers together information about these different motivating factors for building a lower carbon power...

Top Skills For a General Cleaner

The skills section on your resume can be almost as important as the experience section, so you want it to be an accurate portrayal of what you can do. Luckily, we've found all of the skills you'll need so even if you don't have these skills yet, you know what you need to work on. Out of all the resumes we looked through, 13.0% of General Cleaners listed Orderly Condition on their resume, but soft skills such as Interpersonal skills and Mechanical skills are important as well.

Best States For a General Cleaner

Some places are better than others when it comes to starting a career as a General Cleaner. The best states for people in this position are Washington, Oregon, Connecticut, and Alaska. General Cleaners make the most in Washington with an average salary of $32,785. Whereas in Oregon and Connecticut, they would average $31,722 and $30,980, respectively. While General Cleaners would only make an average of $30,251 in Alaska, you would still make more there than in the rest of the country. We determined these as the best states based on job availability and pay. By finding the median salary, cost of living, and using the Bureau of Labor Statistics' Location Quotient, we narrowed down our list of states to these four.

Total General Cleaner Jobs:
1,139
Highest 10% Earn:
$41,000
Location Quotient:
1.43
Location Quotient is a measure used by the Bureau of Labor Statistics (BLS) to determine how concentrated a certain industry is in a single state compared to the nation as a whole. You can read more about how BLS calculates location quotients here

Total General Cleaner Jobs:
681
Highest 10% Earn:
$41,000
Location Quotient:
1.5
Location Quotient is a measure used by the Bureau of Labor Statistics (BLS) to determine how concentrated a certain industry is in a single state compared to the nation as a whole. You can read more about how BLS calculates location quotients here

Total General Cleaner Jobs:
513
Highest 10% Earn:
$37,000
Location Quotient:
1.41
Location Quotient is a measure used by the Bureau of Labor Statistics (BLS) to determine how concentrated a certain industry is in a single state compared to the nation as a whole. You can read more about how BLS calculates location quotients here

How Do General Cleaner Rate Their Jobs?

What do you like the most about working as General Cleaner?

I like that I'm about to work nights for a few hours every night. Works perfectly for working and going to school. I get paid $15/hr, so I'm satisfied for now. Show More

I don't like how I don't get reimbursed for gas mileage driving to the sites. Show More

Most Common Employers For General Cleaner 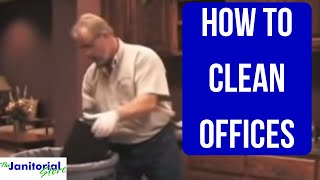 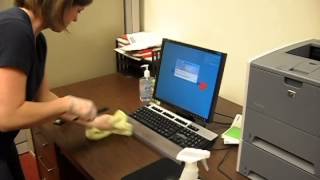