How to Become a Head Cook

What is a Head Cook

A Head Cook, aka the chef, is responsible for running a kitchen, usually in a high-end establishment. They delegate tasks and oversee the work of everyone involved in food preparation, making sure that the result is nothing but exquisite delicacies. They come up with new recipes, create the menu, and make sure the necessary ingredients are always in stock.

Head cooks are deeply passionate about cooking. They live and die for tasty food and know a lot about other countries' culinary cultures. They consider their profession art, rather than anything else, and just like a poet has a favorite pen, you will recognize an authentic head cook by the fact that he/she favors one knife over all others.

Not that salaries matter to a real artist; just for your information, head cooks in the U.S. make an average of $48,098 per year.

What Does a Head Cook Do

There are certain skills that many Head Cooks have in order to accomplish their responsibilities. By taking a look through resumes, we were able to narrow down the most common skills for a person in this position. We discovered that a lot of resumes listed Business skills, Communication skills and Creativity.

Learn more about what a Head Cook does

How To Become a Head Cook

As you move along in your career, you may start taking on more responsibilities or notice that you've taken on a leadership role. Using our career map, a Head Cook can determine their career goals through the career progression. For example, they could start out with a role such as Sous Chef, progress to a title such as Executive Chef and then eventually end up with the title Director Of Food And Beverage.

Average Salary for a Head Cook

Head Cooks in America make an average salary of $47,144 per year or $23 per hour. The top 10 percent makes over $65,000 per year, while the bottom 10 percent under $33,000 per year.
Average Salary
$47,144
Find Your Salary Estimate
How much should you be earning as an Head Cook? Use Zippia's Salary Calculator to get an estimation of how much you should be earning.
See More Salary Information

Build a professional head cook resume in minutes. Browse through our resume examples to identify the best way to word your resume. Then choose from 12+ resume templates to create your head cook resume.

Learn How To Write a Head Cook Resume

At Zippia, we went through countless Head Cook resumes and compiled some information about how to optimize them. Here are some suggestions based on what we found, divided by the individual sections of the resume itself.

Zippia allows you to choose from different easy-to-use Head Cook templates, and provides you with expert advice. Using the templates, you can rest assured that the structure and format of your Head Cook resume is top notch. Choose a template with the colors, fonts & text sizes that are appropriate for your industry. 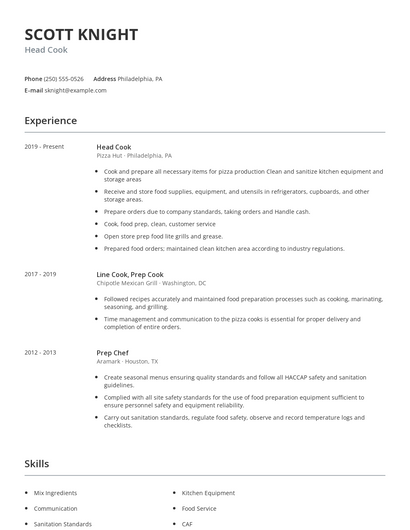 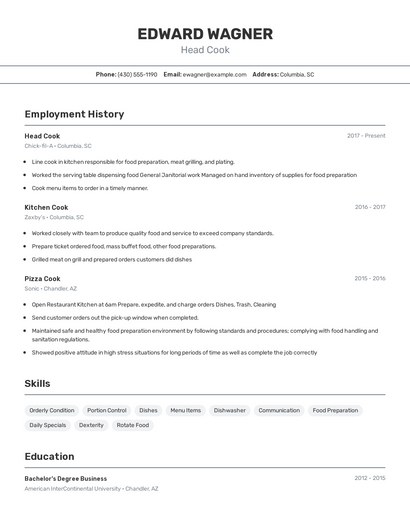 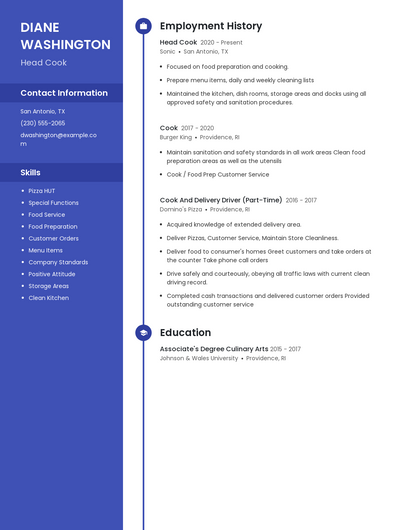 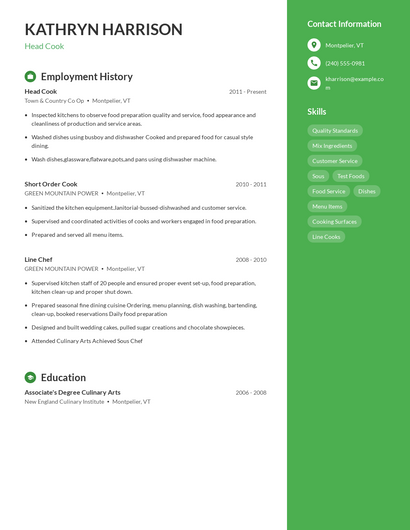 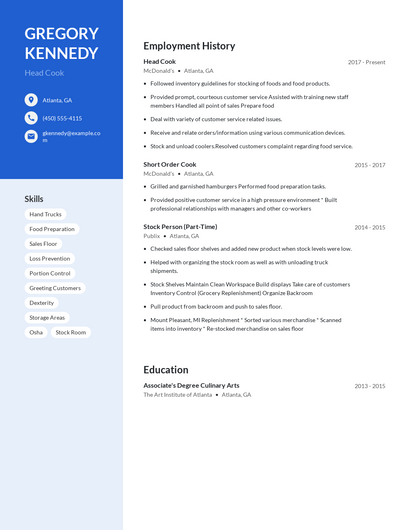 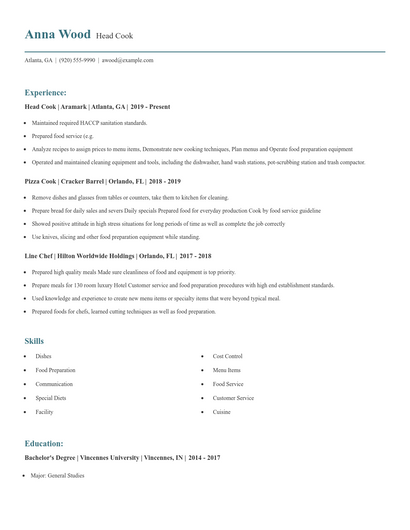 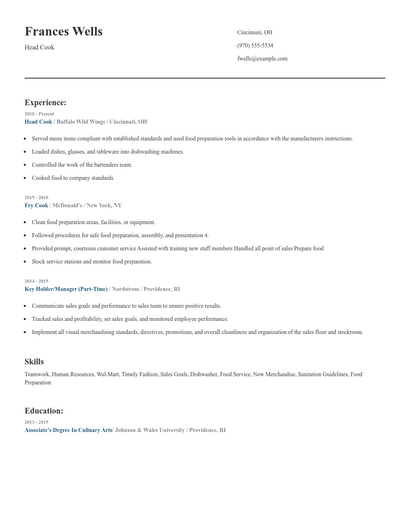 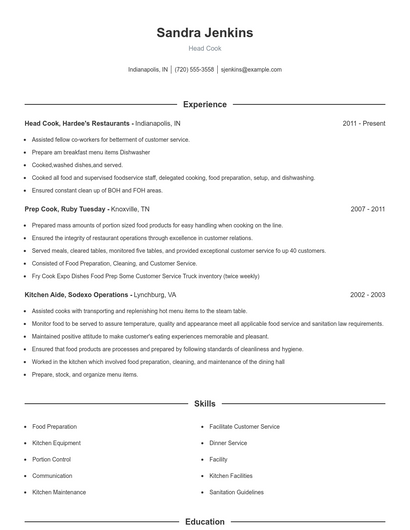 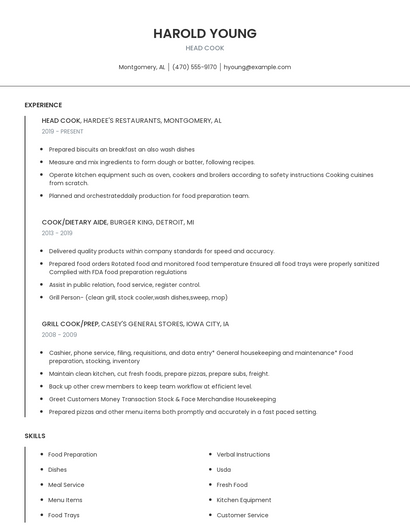 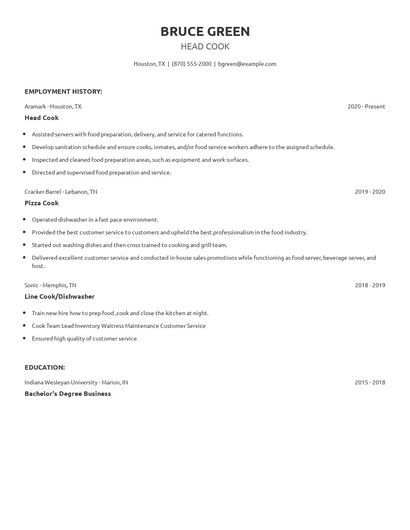 Find the best Head Cook job for you

7. SUNY College of Technology at Alfred

8. SUNY College of Technology at Delhi

Find the best Head Cook job for you

Online Courses For Head Cook That You May Like

Cooking is one of the most powerful ways in which we can optimize our enjoyment of great quality food while protecting our health. Even on a tight budget, cooking can be a cost-effective, joyful and rewarding way to love the food that will love us back for a lifetime. In this course, you'll learn some basic recipes from a home cook and two professional chefs who prioritize healthful eating. You'll also learn some of the fundamentals of principle-based cooking that can help you break free from th...

Top Skills For a Head Cook

The skills section on your resume can be almost as important as the experience section, so you want it to be an accurate portrayal of what you can do. Luckily, we've found all of the skills you'll need so even if you don't have these skills yet, you know what you need to work on. Out of all the resumes we looked through, 32.3% of Head Cooks listed Kitchen Equipment on their resume, but soft skills such as Business skills and Communication skills are important as well.

Best States For a Head Cook

Some places are better than others when it comes to starting a career as a Head Cook. The best states for people in this position are New Jersey, Delaware, Maryland, and Pennsylvania. Head Cooks make the most in New Jersey with an average salary of $80,680. Whereas in Delaware and Maryland, they would average $65,933 and $62,399, respectively. While Head Cooks would only make an average of $61,664 in Pennsylvania, you would still make more there than in the rest of the country. We determined these as the best states based on job availability and pay. By finding the median salary, cost of living, and using the Bureau of Labor Statistics' Location Quotient, we narrowed down our list of states to these four.

Total Head Cook Jobs:
1,987
Highest 10% Earn:
$88,000
Location Quotient:
0.94
Location Quotient is a measure used by the Bureau of Labor Statistics (BLS) to determine how concentrated a certain industry is in a single state compared to the nation as a whole. You can read more about how BLS calculates location quotients here

Total Head Cook Jobs:
5,199
Highest 10% Earn:
$80,000
Location Quotient:
1.42
Location Quotient is a measure used by the Bureau of Labor Statistics (BLS) to determine how concentrated a certain industry is in a single state compared to the nation as a whole. You can read more about how BLS calculates location quotients here

Total Head Cook Jobs:
1,021
Highest 10% Earn:
$115,000
Location Quotient:
0.71
Location Quotient is a measure used by the Bureau of Labor Statistics (BLS) to determine how concentrated a certain industry is in a single state compared to the nation as a whole. You can read more about how BLS calculates location quotients here

How Do Head Cook Rate Their Jobs?

Most Common Employers For Head Cook