How to Become a Helper

What is a Helper

A helper gives a hand with domestic chores. Your employer might have a demanding job or one too many children to take care of, or perhaps they do not have the physical strength to keep an organized home.

You could be asked to work in the garden or maintain the lawn, but most of your tasks will revolve around housekeeping. Cooking, cleaning, and running various errands will be on your to-do list, like grocery shopping, picking up kids from school, cleaning the pool, whatever your employer might think of, really. As long as it is legal, you should be up for it.

You will be coming in and out of other people's homes sharing their personal space, sometimes even in a live-in arrangement, so being friendly, clean, and reliable is a must. You need to build a good relationship with the family you help and, as usual, building trust takes time. Just make sure your working hours are respected, and you get the amount of free time you had agreed upon. Painting an image of what an overworked and cranky helper might do will definitely set the grounds for negotiation.

What Does a Helper Do

There are certain skills that many Helpers have in order to accomplish their responsibilities. By taking a look through resumes, we were able to narrow down the most common skills for a person in this position. We discovered that a lot of resumes listed Color vision, Math skills and Mechanical skills.

Learn more about what a Helper does

How To Become a Helper

If you're interested in becoming a Helper, one of the first things to consider is how much education you need. We've determined that 15.0% of Helpers have a bachelor's degree. In terms of higher education levels, we found that 1.1% of Helpers have master's degrees. Even though some Helpers have a college degree, it's possible to become one with only a high school degree or GED.

In addition to switching up your job search, it might prove helpful to look at a career path for your specific job. Now, what's a career path you ask? Well, it's practically a map that shows how you might advance from one job title to another. Our career paths are especially detailed with salary changes. So, for example, if you started out with the role of Driver you might progress to a role such as Technician eventually. Later on in your career, you could end up with the title Project Manager.

Average Salary for a Helper

Helpers in America make an average salary of $33,242 per year or $16 per hour. The top 10 percent makes over $50,000 per year, while the bottom 10 percent under $21,000 per year.
Average Salary
$33,242
Find Your Salary Estimate
How much should you be earning as an Helper? Use Zippia's Salary Calculator to get an estimation of how much you should be earning.
See More Salary Information

Build a professional helper resume in minutes. Browse through our resume examples to identify the best way to word your resume. Then choose from 12+ resume templates to create your helper resume.

Learn How To Write a Helper Resume

At Zippia, we went through countless Helper resumes and compiled some information about how to optimize them. Here are some suggestions based on what we found, divided by the individual sections of the resume itself.

Zippia allows you to choose from different easy-to-use Helper templates, and provides you with expert advice. Using the templates, you can rest assured that the structure and format of your Helper resume is top notch. Choose a template with the colors, fonts & text sizes that are appropriate for your industry. 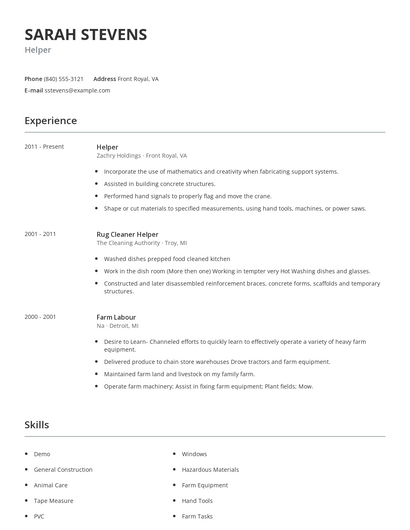 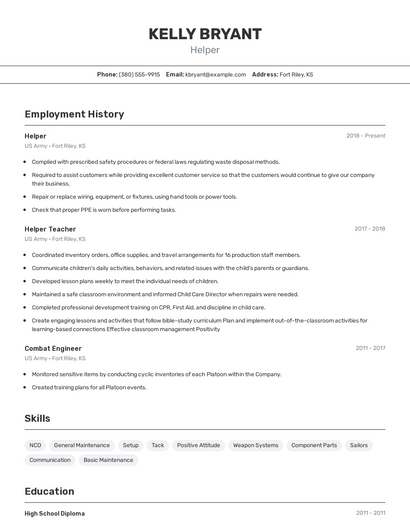 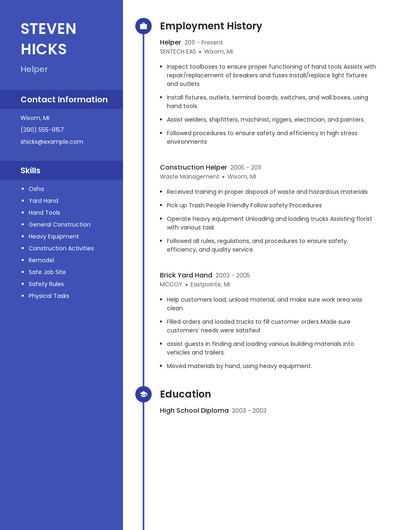 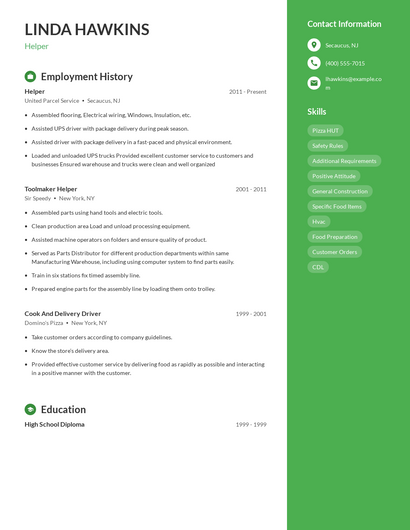 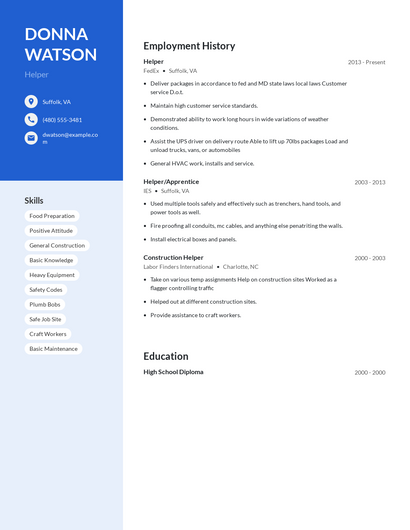 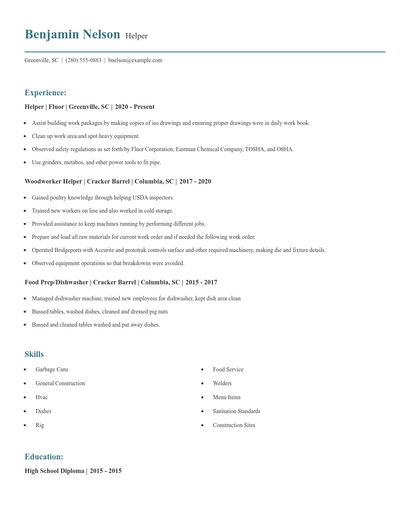 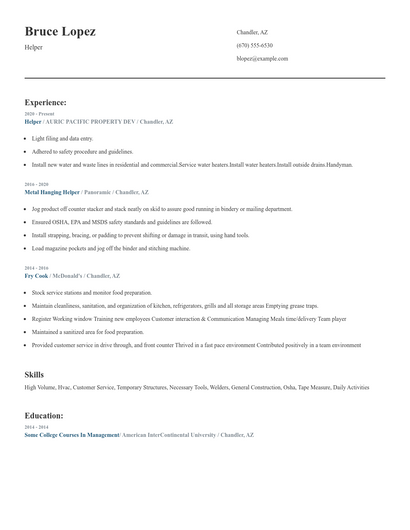 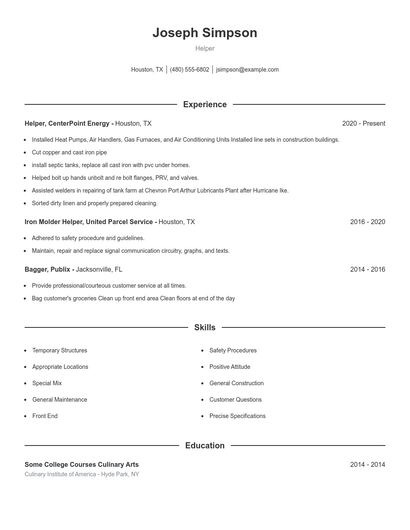 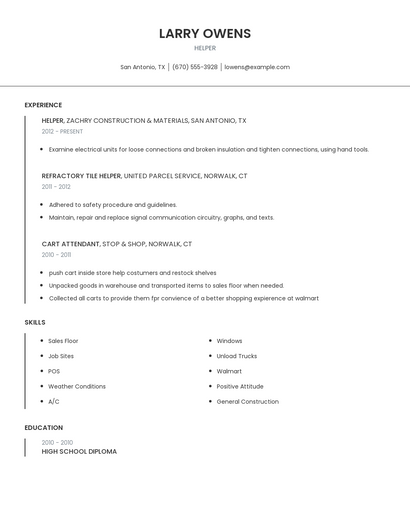 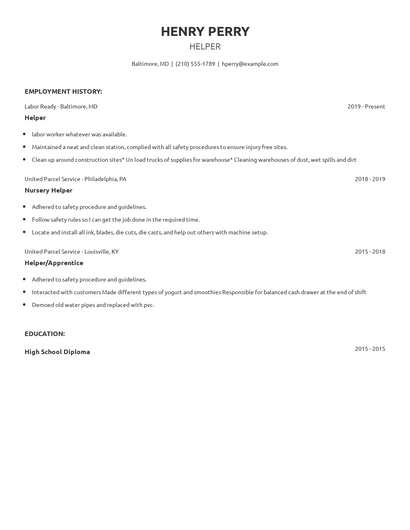 Find the best Helper job for you

Find the best Helper job for you

The first in our “Spatial Computational Thinking” program, this “Procedural Modelling” course will focus on the fundamentals of procedural programming in 3D. You’ll learn to write computational procedures using data structures and control-flow statements to automate the production of 3D models. During the course, you will learn a range of computational methods. These include general programming constructs such as using ‘while’ loops, ‘for-each’ loops, ‘if-else’ conditions, as well as writing...

Top Skills For a Helper

The skills section on your resume can be almost as important as the experience section, so you want it to be an accurate portrayal of what you can do. Luckily, we've found all of the skills you'll need so even if you don't have these skills yet, you know what you need to work on. Out of all the resumes we looked through, 11.7% of Helpers listed Safety Procedures on their resume, but soft skills such as Color vision and Math skills are important as well.

Best States For a Helper

Some places are better than others when it comes to starting a career as a Helper. The best states for people in this position are Nevada, California, Oregon, and Maine. Helpers make the most in Nevada with an average salary of $38,393. Whereas in California and Oregon, they would average $38,021 and $37,991, respectively. While Helpers would only make an average of $37,543 in Maine, you would still make more there than in the rest of the country. We determined these as the best states based on job availability and pay. By finding the median salary, cost of living, and using the Bureau of Labor Statistics' Location Quotient, we narrowed down our list of states to these four.

Total Helper Jobs:
114
Highest 10% Earn:
$62,000
Location Quotient:
1.92
Location Quotient is a measure used by the Bureau of Labor Statistics (BLS) to determine how concentrated a certain industry is in a single state compared to the nation as a whole. You can read more about how BLS calculates location quotients here

Total Helper Jobs:
202
Highest 10% Earn:
$48,000
Location Quotient:
1.42
Location Quotient is a measure used by the Bureau of Labor Statistics (BLS) to determine how concentrated a certain industry is in a single state compared to the nation as a whole. You can read more about how BLS calculates location quotients here

Total Helper Jobs:
46
Highest 10% Earn:
$60,000
Location Quotient:
1.34
Location Quotient is a measure used by the Bureau of Labor Statistics (BLS) to determine how concentrated a certain industry is in a single state compared to the nation as a whole. You can read more about how BLS calculates location quotients here

How Do Helper Rate Their Jobs?

Most Common Employers For Helper 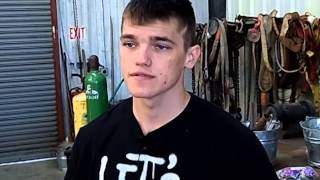 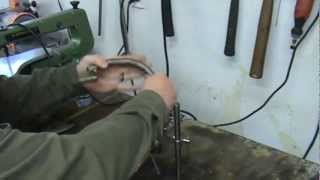 How long does it take to become a Helper?

It takes one year or less to become a helper. That is the time it takes to learn specific helper skills, but does not account for time spent in formal education.

Learn more about this question
Have more questions? See all answers to common construction and extraction questions.