How to Become a Language Translator

What is a Language Translator

Someone who loves to learn new languages and wants to make a career out of it can often end up as a language translator. These linguistic professionals convert information from one language to another so that people can understand the original source in their native language. While working as independent foreign language translators under software development companies, they translate and transcribe important information. Moreover, language translators also interpret administrative hearings, conferences, and meetings.

Normally language translators have a bachelor's degree, but some of them even complete their master's degree before applying for jobs. Commonly, they study Linguistics, English, or Business. Knowledge and understanding of foreign languages, Haitian Creole, translation services, or Hindi can be seen in the resumes of language translators.

Normally, working as a language translator, you can earn around $22 in an hour and make more than $45,000 per year. The career has a good growth rate with more job opportunities in the future.

There is more than meets the eye when it comes to being a Language Translator. For example, did you know that they make an average of $27.62 an hour? That's $57,443 a year!

What Does a Language Translator Do

There are certain skills that many Language Translators have in order to accomplish their responsibilities. By taking a look through resumes, we were able to narrow down the most common skills for a person in this position. We discovered that a lot of resumes listed Business skills, Cultural sensitivity and Dexterity.

Learn more about what a Language Translator does

How To Become a Language Translator

In addition to switching up your job search, it might prove helpful to look at a career path for your specific job. Now, what's a career path you ask? Well, it's practically a map that shows how you might advance from one job title to another. Our career paths are especially detailed with salary changes. So, for example, if you started out with the role of Teacher you might progress to a role such as Consultant eventually. Later on in your career, you could end up with the title Managing Partner.

Average Salary for a Language Translator

Language Translators in America make an average salary of $57,443 per year or $28 per hour. The top 10 percent makes over $91,000 per year, while the bottom 10 percent under $36,000 per year.
Average Salary
$57,443
Find Your Salary Estimate
How much should you be earning as an Language Translator? Use Zippia's Salary Calculator to get an estimation of how much you should be earning.
See More Salary Information

Zippia allows you to choose from different easy-to-use Language Translator templates, and provides you with expert advice. Using the templates, you can rest assured that the structure and format of your Language Translator resume is top notch. Choose a template with the colors, fonts & text sizes that are appropriate for your industry. 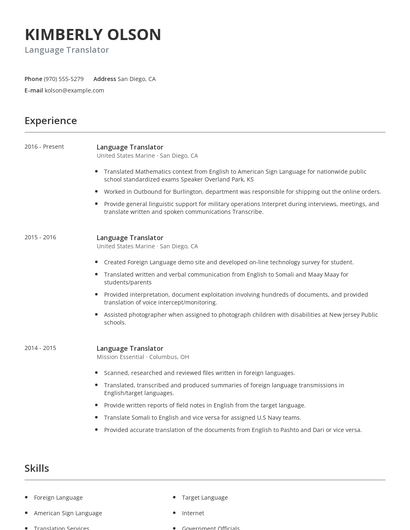 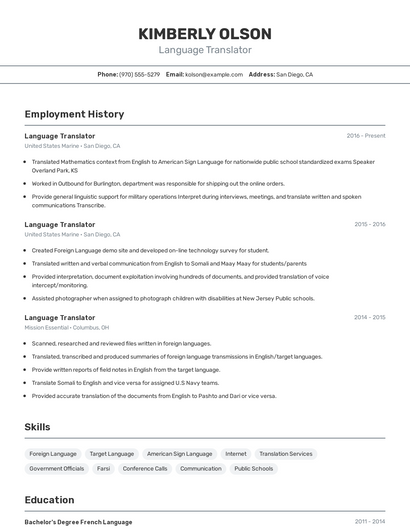 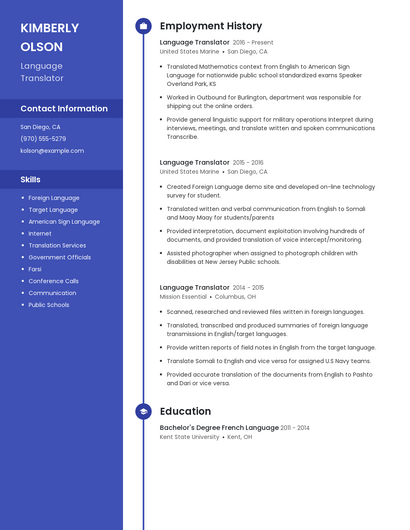 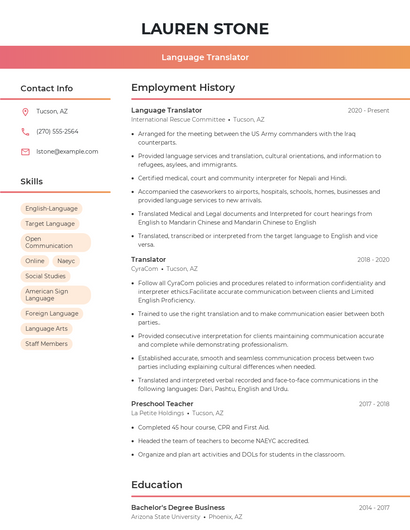 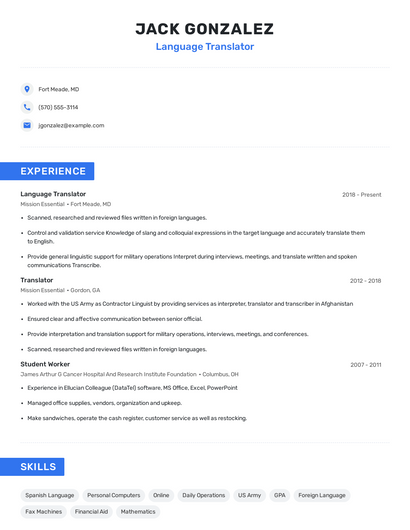 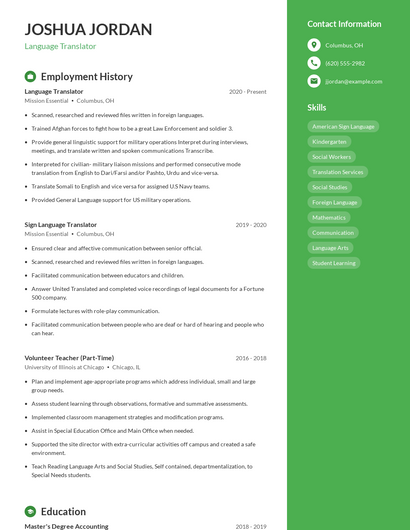 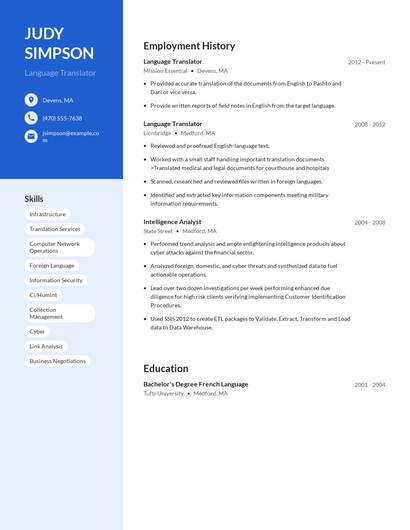 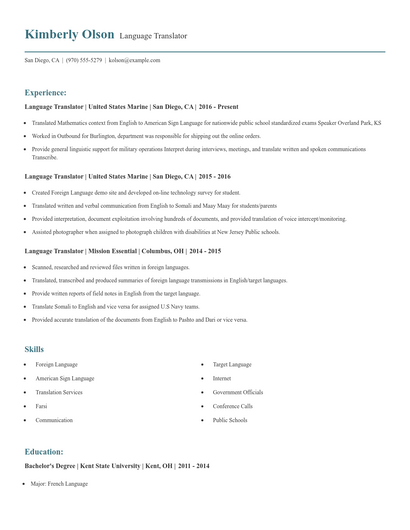 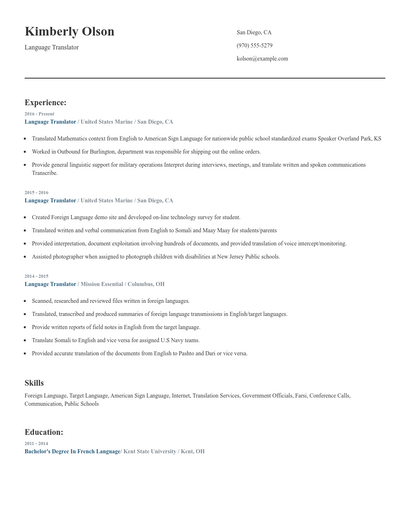 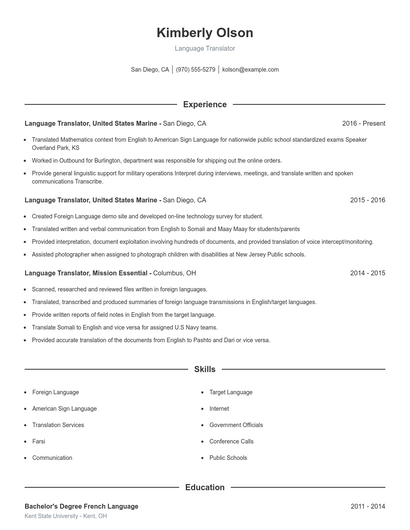 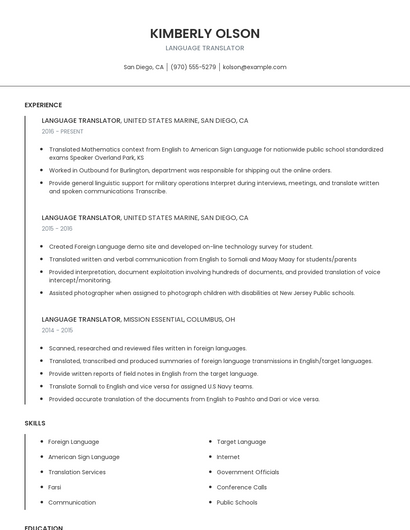 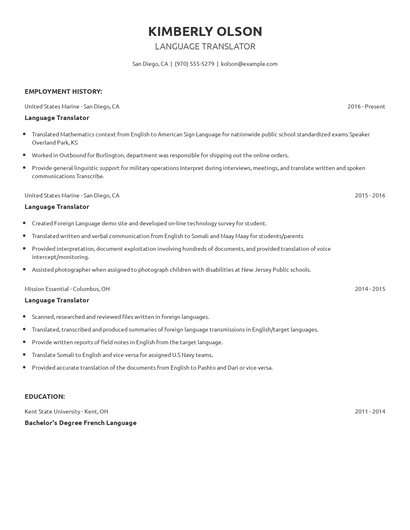 Find the best Language Translator job for you

Find the best Language Translator job for you

Online Courses For Language Translator That You May Like

Professional translation is a complex process that usually involves collaboration of multiple people. The course will show you how to build this process correctly: analyze content, determine requirements and risks, select appropriate jobs and vendors, evaluate translation quality. You will know why user manuals should not be translated in the same way as you would translate promotional or legal documents. You will see why every content type requires a special translation approach and learn to pr...

This course offers you basic but valuable techniques used by a good translator in the translation between English and Chinese. We'll discuss what is translation, what is good translation, and learn about how to produce good translations. All the examples used in this course are taken from the course instructor's own translations of various genres and topics of writing. These examples are elaborated on to show you how to understand the idea, style and tone of the writer, the historical and cultur...

Top Skills For a Language Translator

The skills section on your resume can be almost as important as the experience section, so you want it to be an accurate portrayal of what you can do. Luckily, we've found all of the skills you'll need so even if you don't have these skills yet, you know what you need to work on. Out of all the resumes we looked through, 21.8% of Language Translators listed Foreign Language on their resume, but soft skills such as Business skills and Cultural sensitivity are important as well.

Best States For a Language Translator

Some places are better than others when it comes to starting a career as a Language Translator. The best states for people in this position are New York, Virginia, California, and Massachusetts. Language Translators make the most in New York with an average salary of $72,928. Whereas in Virginia and California, they would average $65,309 and $63,472, respectively. While Language Translators would only make an average of $62,744 in Massachusetts, you would still make more there than in the rest of the country. We determined these as the best states based on job availability and pay. By finding the median salary, cost of living, and using the Bureau of Labor Statistics' Location Quotient, we narrowed down our list of states to these four.

Total Language Translator Jobs:
206
Highest 10% Earn:
$89,000
Location Quotient:
3.16
Location Quotient is a measure used by the Bureau of Labor Statistics (BLS) to determine how concentrated a certain industry is in a single state compared to the nation as a whole. You can read more about how BLS calculates location quotients here

Total Language Translator Jobs:
528
Highest 10% Earn:
$98,000
Location Quotient:
1.31
Location Quotient is a measure used by the Bureau of Labor Statistics (BLS) to determine how concentrated a certain industry is in a single state compared to the nation as a whole. You can read more about how BLS calculates location quotients here

Total Language Translator Jobs:
117
Highest 10% Earn:
$99,000
Location Quotient:
1.4
Location Quotient is a measure used by the Bureau of Labor Statistics (BLS) to determine how concentrated a certain industry is in a single state compared to the nation as a whole. You can read more about how BLS calculates location quotients here

How Do Language Translator Rate Their Jobs?

Most Common Employers For Language Translator