How to Become a Potato Inspector

What is a Potato Inspector

There is more than meets the eye when it comes to being a Potato Inspector. For example, did you know that they make an average of $23.57 an hour? That's $49,036 a year!

What Does a Potato Inspector Do

There are certain skills that many Potato Inspectors have in order to accomplish their responsibilities. By taking a look through resumes, we were able to narrow down the most common skills for a person in this position. We discovered that a lot of resumes listed Dexterity, Math skills and Mechanical skills.

How To Become a Potato Inspector

Average Salary for a Potato Inspector

Potato Inspectors in America make an average salary of $49,036 per year or $24 per hour. The top 10 percent makes over $94,000 per year, while the bottom 10 percent under $25,000 per year.
Average Salary
$49,036
Find Your Salary Estimate
How much should you be earning as an Potato Inspector? Use Zippia's Salary Calculator to get an estimation of how much you should be earning.

Zippia allows you to choose from different easy-to-use Potato Inspector templates, and provides you with expert advice. Using the templates, you can rest assured that the structure and format of your Potato Inspector resume is top notch. Choose a template with the colors, fonts & text sizes that are appropriate for your industry. 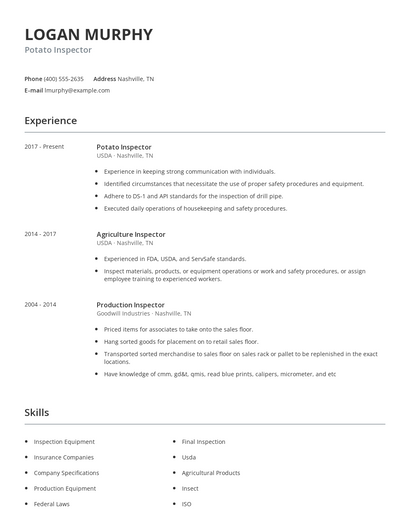 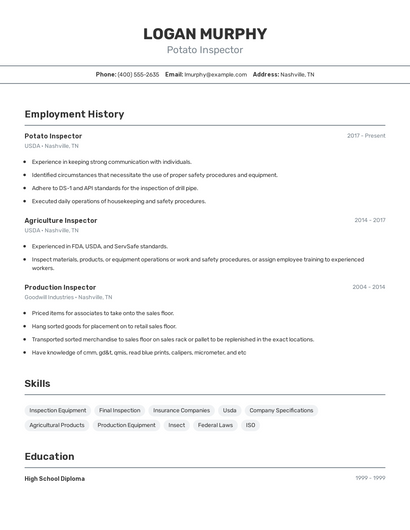 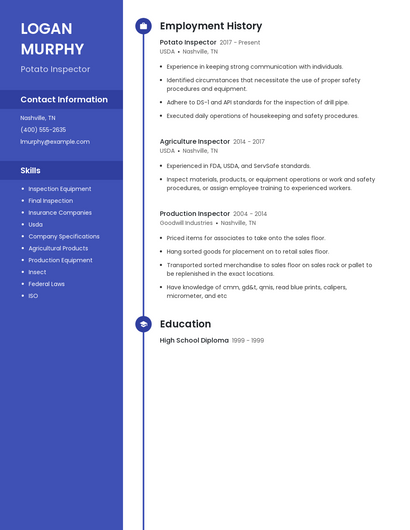 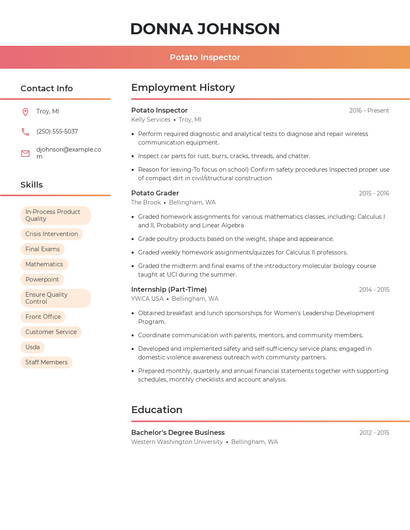 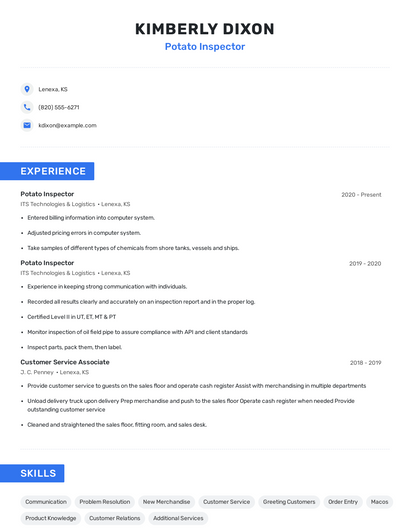 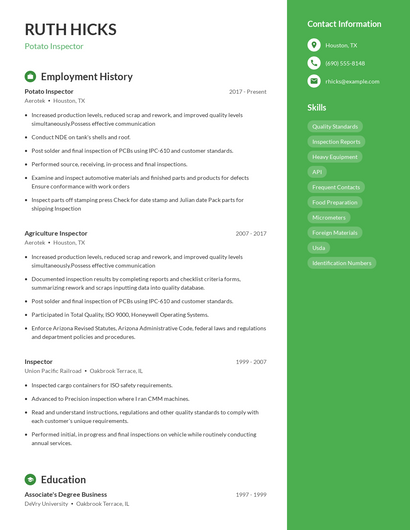 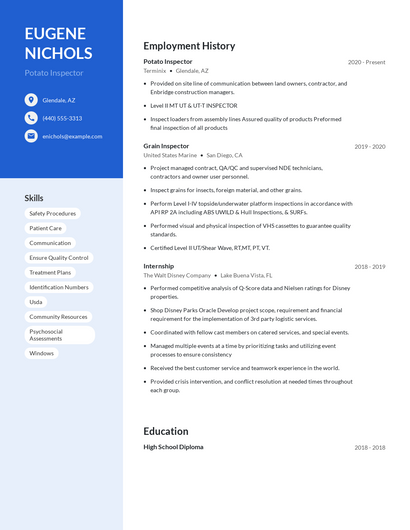 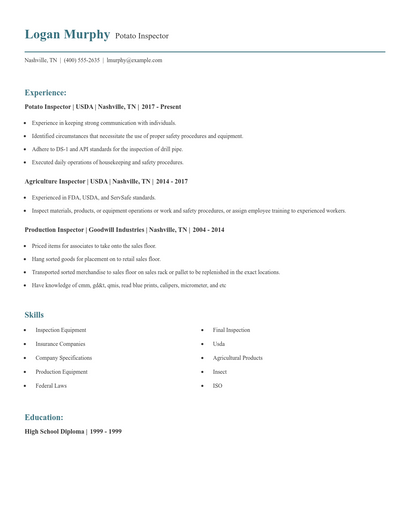 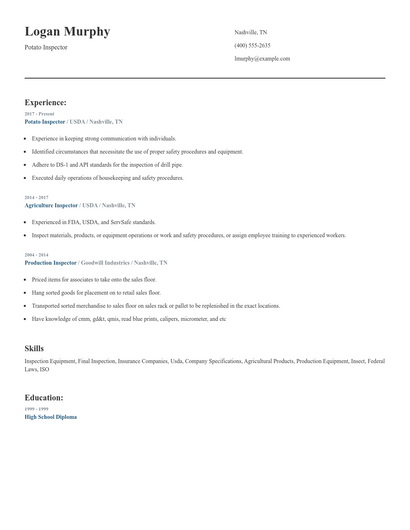 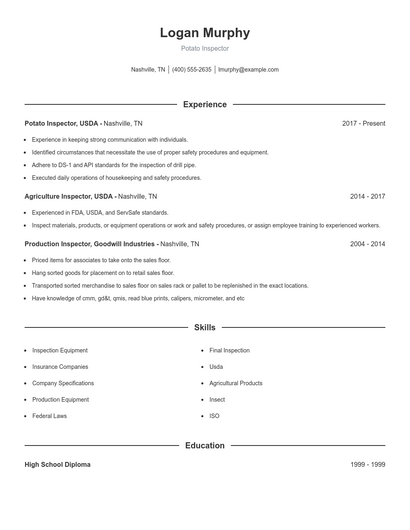 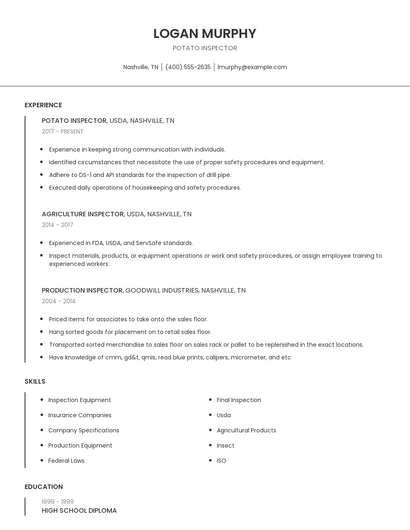 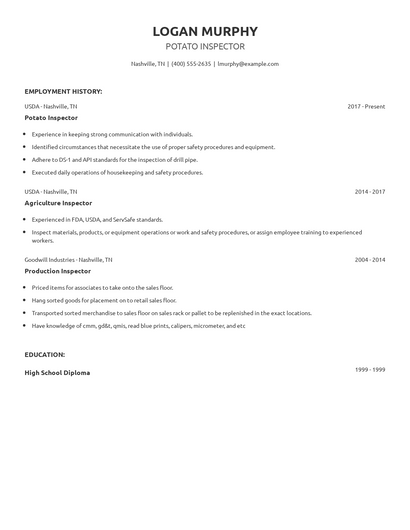 Find the best Potato Inspector job for you

Find the best Potato Inspector job for you

Online Courses For Potato Inspector That You May Like

Many estimates indicate that the world population is going to reach 9.6 billion by 2050. This implies that food production is required to increase by 70% in order to meet the demand of such a huge population. Therefore, it is becoming very essential to take serious reforms in the agricultural sector to ensure that the food system is ready to meet the challenges of a burgeoning world population. Thus, the goal of sustainable agriculture is to feed expanding population while farming in an...

Digital Agricultural Technologies (DATs) are innovations that enable farmers and agribusiness entrepreneurs to leapfrog to increase their productivity, efficiency, and competitiveness, facilitate access to markets, improve nutritional outcomes and enhance resilience to climate change. These technologies range from mobile apps to digital identities for farmers to solar applications for agriculture to portable agriculture devices. DATs are increasingly becoming indispensable in the global food...

How Do Potato Inspector Rate Their Jobs?

Most Common Employers For Potato Inspector