How to Become a Prep Cook/Dishwasher

What is a Prep Cook/Dishwasher

Prep Cooks and Dishwashers are considered as low-level jobs to the financial world but to the creative culinary world a rite of passage into understanding the integrity behind the process of cooking. Legendary chefs such as Anthony Bourdain, Thomas Keller, and Mario Batalli all started as dishwashers.

A prep cook and dishwasher are primarily involved in cleaning kitchen utensils and equipment, as well as undertaking food preparation tasks such as chopping, weighing, washing, and storing. They also help to assist chefs in recording food inventory.

Many chefs become dishwashers at a very young age to understand how the kitchen works and this role does not require any previous experience. If you have the passion and willingness to go the extra mile, a chef will give you the opportunity. You just need to show up and knock on the door. Prep cooks and dishwashers earn an average of $12 per hour and generally work between 30-50 hours per week.

There is more than meets the eye when it comes to being a Prep Cook/Dishwasher. For example, did you know that they make an average of $14.39 an hour? That's $29,924 a year!

What Does a Prep Cook/Dishwasher Do

There are certain skills that many Prep Cook/Dishwashers have in order to accomplish their responsibilities. By taking a look through resumes, we were able to narrow down the most common skills for a person in this position. We discovered that a lot of resumes listed Listening skills, Physical strength and Dexterity.

Learn more about what a Prep Cook/Dishwasher does

How To Become a Prep Cook/Dishwasher

As you move along in your career, you may start taking on more responsibilities or notice that you've taken on a leadership role. Using our career map, a Prep Cook/Dishwasher can determine their career goals through the career progression. For example, they could start out with a role such as Cook, progress to a title such as Executive Chef and then eventually end up with the title Food Service Director.

Average Salary for a Prep Cook/Dishwasher

Prep Cook/Dishwashers in America make an average salary of $29,924 per year or $14 per hour. The top 10 percent makes over $36,000 per year, while the bottom 10 percent under $24,000 per year.
Average Salary
$29,924
Find Your Salary Estimate
How much should you be earning as an Prep Cook/Dishwasher? Use Zippia's Salary Calculator to get an estimation of how much you should be earning.
See More Salary Information

Learn How To Write a Prep Cook/Dishwasher Resume

At Zippia, we went through countless Prep Cook/Dishwasher resumes and compiled some information about how to optimize them. Here are some suggestions based on what we found, divided by the individual sections of the resume itself.

Zippia allows you to choose from different easy-to-use Prep Cook/Dishwasher templates, and provides you with expert advice. Using the templates, you can rest assured that the structure and format of your Prep Cook/Dishwasher resume is top notch. Choose a template with the colors, fonts & text sizes that are appropriate for your industry. 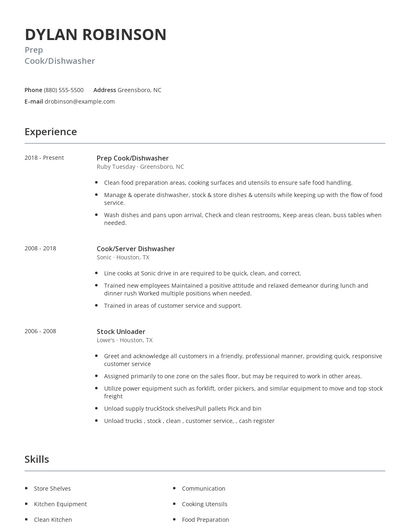 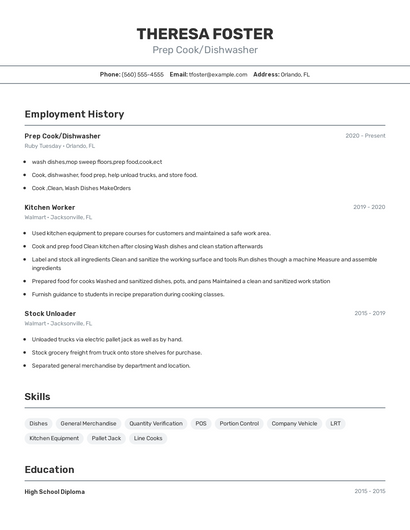 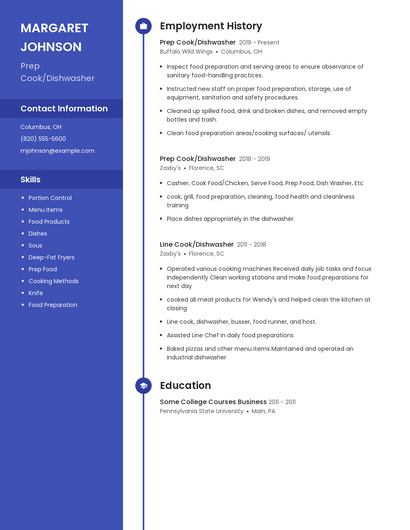 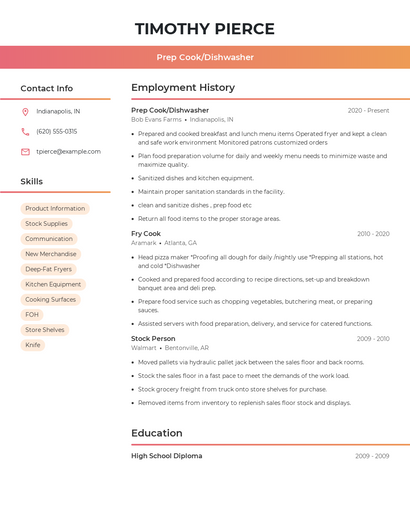 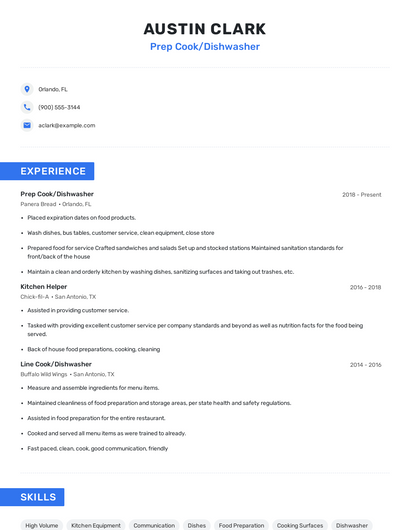 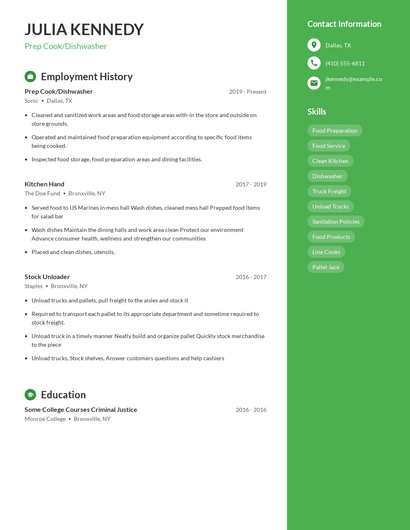 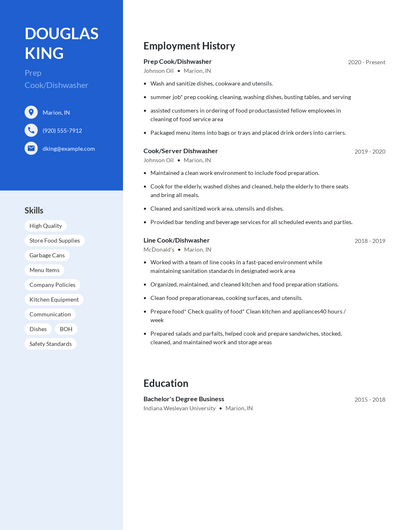 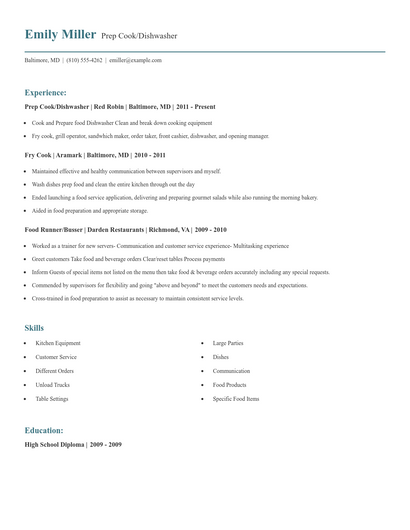 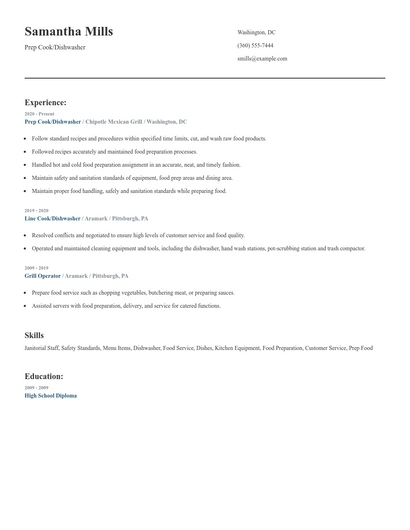 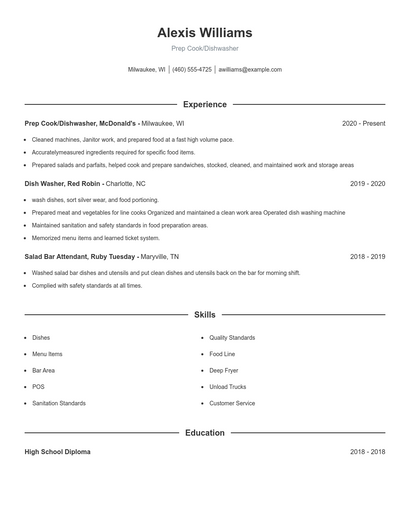 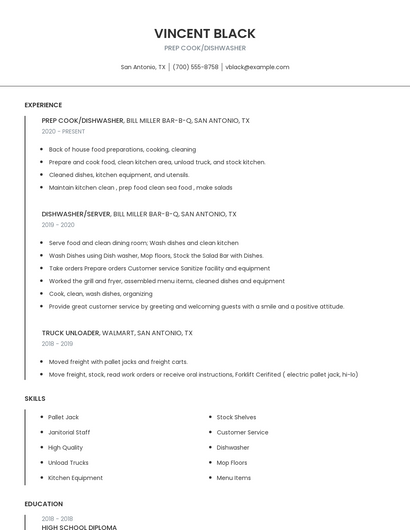 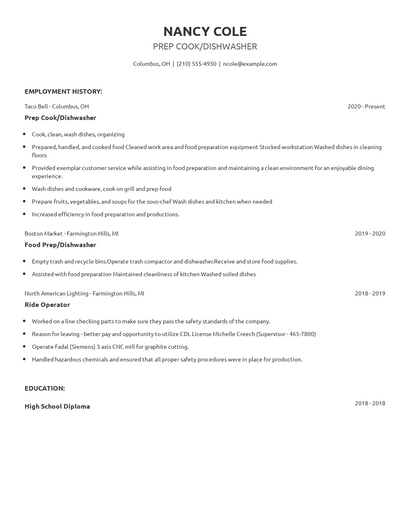 Find the best Prep Cook/Dishwasher job for you

Find the best Prep Cook/Dishwasher job for you

Online Courses For Prep Cook/Dishwasher That You May Like

Cooking is one of the most powerful ways in which we can optimize our enjoyment of great quality food while protecting our health. Even on a tight budget, cooking can be a cost-effective, joyful and rewarding way to love the food that will love us back for a lifetime. In this course, you'll learn some basic recipes from a home cook and two professional chefs who prioritize healthful eating. You'll also learn some of the fundamentals of principle-based cooking that can help you break free from th...

View Details on Coursera
The Hidden Side of Energy Access: Clean Cooking

Stagnating progress on this development agenda costs the world an estimated 2.4 trillion USD per year. In this four-part learning series, you will familiarize yourself with core concepts in the clean cooking sector, uncover the nuanced and contextual nature of accessing modern cooking solutions, learn about innovative financing approaches, and discover recommendations for actors seeking to make clean cooking a reality for households across the world. The course features four distinct learning...

Top Skills For a Prep Cook/Dishwasher

The skills section on your resume can be almost as important as the experience section, so you want it to be an accurate portrayal of what you can do. Luckily, we've found all of the skills you'll need so even if you don't have these skills yet, you know what you need to work on. Out of all the resumes we looked through, 33.5% of Prep Cook/Dishwashers listed Kitchen Equipment on their resume, but soft skills such as Listening skills and Physical strength are important as well.

Best States For a Prep Cook/Dishwasher

Some places are better than others when it comes to starting a career as a Prep Cook/Dishwasher. The best states for people in this position are Washington, California, Hawaii, and Oregon. Prep Cook/Dishwashers make the most in Washington with an average salary of $37,045. Whereas in California and Hawaii, they would average $34,424 and $34,336, respectively. While Prep Cook/Dishwashers would only make an average of $32,849 in Oregon, you would still make more there than in the rest of the country. We determined these as the best states based on job availability and pay. By finding the median salary, cost of living, and using the Bureau of Labor Statistics' Location Quotient, we narrowed down our list of states to these four.

Total Prep Cook/Dishwasher Jobs:
959
Highest 10% Earn:
$39,000
Location Quotient:
1.03
Location Quotient is a measure used by the Bureau of Labor Statistics (BLS) to determine how concentrated a certain industry is in a single state compared to the nation as a whole. You can read more about how BLS calculates location quotients here

Total Prep Cook/Dishwasher Jobs:
340
Highest 10% Earn:
$37,000
Location Quotient:
1.04
Location Quotient is a measure used by the Bureau of Labor Statistics (BLS) to determine how concentrated a certain industry is in a single state compared to the nation as a whole. You can read more about how BLS calculates location quotients here

Total Prep Cook/Dishwasher Jobs:
764
Highest 10% Earn:
$43,000
Location Quotient:
0.67
Location Quotient is a measure used by the Bureau of Labor Statistics (BLS) to determine how concentrated a certain industry is in a single state compared to the nation as a whole. You can read more about how BLS calculates location quotients here

How Do Prep Cook/Dishwasher Rate Their Jobs?

Most Common Employers For Prep Cook/Dishwasher 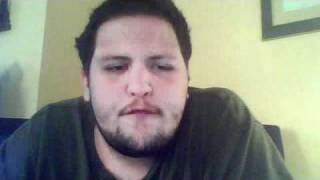 overqualified to be a dishwasher 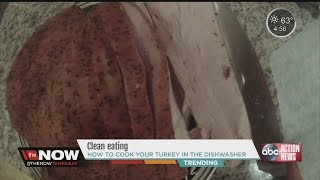 How to cook turkey in a dishwasher