The QuikTrip Corporation, more commonly known as QuikTrip, is an American chain of convenience stores based in Tulsa, Oklahoma that primarily operates in the Midwestern, Southern, and Southeastern United States as well as in Arizona. The first QuikTrip was opened in 1958 in Tulsa by Burt Holmes and Chester Cadieux.
The staff at QuikTrip come from unusually diverse demographic backgrounds. The company is 40.0% female and 37.9% ethnic minorities. The diversity in QuikTrip employees extends to employee political beliefs. Its employees are politically diverse and represent a balanced blend of political orientations, with 50.0% Democrats and 50.0% Republicans. Despite its impressive demographic and political diversity, QuikTrip has employees who stay with the company for relatively short tenures. QuikTrip staff members usually stay for 2.6 years.
QuikTrip is an industry leader with 22,534 employees and an annual revenue of $9.2B that is headquartered in Tulsa, Oklahoma.

To wisely invest dollars in community efforts that will help impact (in measurable terms) individuals in our society who are dependent on the charitable support of others. We believe the most effective way to do that is to invest our contribution dollars and volunteers in strategic efforts that help those at risk reach their functional capacity as successful, independent citizens.

Perks of Working at QuikTrip

Their store teams work hard, have fun, and genuinely love providing great service. In return, the company gives them great pay, great benefits, and all the fountain drinks they can consume.

The team at QuikTrip

Key People
The Inside Scoop
QT warehouse team members order and receive a large percentage of our store merchandise, then deliver these orders to stores several times a week. QT bakery and commissary team members prepare and deliver fresh food daily to each of our QT stores. Made fresh to order food, premium specialty drinks, and tasty frozen treat selections are available at the full-service counters each day.
Show More

What do people say about QuikTrip

The flexible schedule. They allow me to go to school and work Show More

Do you work at QuikTrip? Rate QuikTrip as an Employer.

How would you rate working at QuikTrip?

QuikTrip is ranked #4 on the Best Companies to Work For in Oklahoma list. Zippia's Best Places to Work lists provide unbiased, data-based evaluations of companies. Rankings are based on government and proprietary data on salaries, company financial health, and employee diversity.

On average, employees at QuikTrip stay with the company for 2.6 years. Employees most commonly join QuikTrip after leaving McDonald's. When they leave QuikTrip, they most frequently get their next job at Walmart.

Do you Work At QuikTrip? 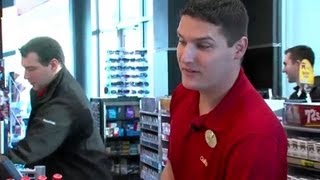 How Would You Rate The Company Culture Of QuikTrip?

Have you worked at QuikTrip? Help other job seekers by rating QuikTrip.

When was QuikTrip founded?

How many Employees does QuikTrip have?

How much money does QuikTrip make?

QuikTrip generates $9.2B in revenue.

What industry is QuikTrip in?

QuikTrip is in the retailing industry.

QuikTrip's mission statement is "To wisely invest dollars in community efforts that will help impact (in measurable terms) individuals in our society who are dependent on the charitable support of others. We believe the most effective way to do that is to invest our contribution dollars and volunteers in strategic efforts that help those at risk reach their functional capacity as successful, independent citizens."

What type of company is QuikTrip?

QuikTrip is a private company.

Who works at QuikTrip?

Are you an executive, HR leader, or brand manager at QuikTrip?

You can find out what it is like to work at QuikTrip, also known as QUIKTRIP CORP, QuikTrip and QuikTrip Corporation.

Zippia gives an in-depth look into the details of QuikTrip, including salaries, political affiliations, employee data, and more, in order to inform job seekers about QuikTrip. The employee data is based on information from people who have self-reported their past or current employments at QuikTrip. While we have made attempts to ensure that the information displayed are correct, Zippia is not responsible for any errors or omissions, or for the results obtained from the use of this information. The data presented on this page does not represent the view of QuikTrip and its employees or that of Zippia.