The Culture At Red Hat

Information provided by the company
You'll need to have a passion for the people that change the world through bits and bytes and innately understand that empowering them brings us another day closer to a better tomorrow. You'll covet being the voice of the developer for Red Hat, looking to make them successful every day.
Show More
Passionate and committed to providing the best experience possible for Red Hat's associates.
Industry experience supporting Red Hat Satellite offerings.
You'll need to be curious, creative, and passionate about using data to build innovative and connected solutions across the total rewards space.. .
Our program offers many opportunities to fully experience what it's like to be a Red Hatter, including lunch-and-learns with executives, volunteer opportunities, day trips, and after-work events.

Red Hat is a company dedicated to free and open source software, and a major Linux distribution vendor. The company is known for its enterprise operating system Red Hat Enterprise Linux, and more recently through the acquisition of open source enterprise middleware vendor JBoss. Red Hat provides operating system platforms along with middleware, applications, and management solutions, as well as support, training, and consulting services.
The staff at Red Hat come from unusually diverse demographic backgrounds. The company is 37.9% female and 43.4% ethnic minorities. Despite its diversity in other areas, Red Hat employees are noticeably lacking in political diversity. It has an unusually high proportion of employees who are members of the Democratic Party, at 83.0%. Employees seem to enjoy working in an otherwise diverse workplace that is dominated by members of the Democratic Party. Red Hat has great employee retention with staff members usually staying with the company for 4.0 years. The average employee at Red Hat makes $99,297 per year. Pay at Red Hat is significantly lower than some of its highest paying competitors, like VMware, Juniper Networks, and Workday, which pay $133,659, $127,781, and $127,093, respectively.
Based in Raleigh, NC, Red Hat is an industry leader with 13,400 employees and an annual revenue of $3.4B.

To be the catalyst in communities of customers, contributors, and partners creating better technology the open source way.

Perks of Working at Red Hat

Red Hat provides employees with lots of opportunities to learn new skills and work in new technology. It is a great workplace offering good job security and financial stability.

Poor visibility from management - given its size, the company needs to be a better job of preparing its managers to recognize who puts in the work

Training could be improved

Breathing slowly while I work from home

Gotten too large with IBM acquisition

The work culture and exciting nature of work

Do you work at Red Hat? Rate Red Hat as an Employer.

How would you rate working at Red Hat?

What do you like about working for Red Hat?

The Team At Red Hat

The Inside Scoop
Founded in 1993, Red Hat Inc is an American multinational software company that provides open-source solutions to the enterprise community. The company's software offerings are designed to provide customers with scalable, flexible, reliable, and high-performing technologies that meet the information technology needs of enterprises. It is headquartered in Raleigh, NC and has satellite offices in US, Canada, Europe, Middle East, Africa, and the Asia Pacific.
Show More

Red Hat is ranked #86 on the Best Technology Companies to Work For in America list. Zippia's Best Places to Work lists provide unbiased, data-based evaluations of companies. Rankings are based on government and proprietary data on salaries, company financial health, and employee diversity.

Do you Work At Red Hat? 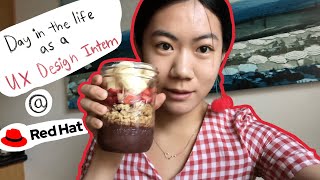 Day in the Life of a UX Design Intern @ Red Hat

How Would You Rate The Company Culture Of Red Hat?

Have you worked at Red Hat? Help other job seekers by rating Red Hat.

When was Red Hat founded?

How many Employees does Red Hat have?

How much money does Red Hat make?

Red Hat generates $3.4B in revenue.

What industry is Red Hat in?

Red Hat is in the computer software industry.

What is Red Hat's mission?

Red Hat's mission statement is "To be the catalyst in communities of customers, contributors, and partners creating better technology the open source way."

What type of company is Red Hat?

Red Hat is a public company.

Who are Red Hat's competitors?

Who works at Red Hat?

Are You An Executive, HR Leader, Or Brand Manager At Red Hat?

Most Common Jobs At Red Hat

Zippia gives an in-depth look into the details of Red Hat, including salaries, political affiliations, employee data, and more, in order to inform job seekers about Red Hat. The employee data is based on information from people who have self-reported their past or current employments at Red Hat. The data on this page is also based on data sources collected from public and open data sources on the Internet and other locations, as well as proprietary data we licensed from other companies. Sources of data may include, but are not limited to, the BLS, company filings, estimates based on those filings, H1B filings, and other public and private datasets. While we have made attempts to ensure that the information displayed are correct, Zippia is not responsible for any errors or omissions or for the results obtained from the use of this information. None of the information on this page has been provided or approved by Red Hat. The data presented on this page does not represent the view of Red Hat and its employees or that of Zippia.