How to Become a Server

What is a Server

Be our guest! Sure, server's don't typically sing Disney songs to their customers but they do make sure customers get their food as soon as it's ready.

Once you've been serving for awhile, you may be able to impress your guests with taking their food order without writing the orders down. As long as you get the entire order correct, this may score you a nice tip.

Not everyone is going to enjoy their dining experience though, and whether it's your fault or the chef's fault, it is your responsibility to correct any problems. Don't worry, you can go yell at the chef later.

What Does a Server Do

There are certain skills that many Servers have in order to accomplish their responsibilities. By taking a look through resumes, we were able to narrow down the most common skills for a person in this position. We discovered that a lot of resumes listed Detail oriented, Communication skills and Customer-service skills.

Learn more about what a Server does

How To Become a Server

If you're interested in becoming a Server, one of the first things to consider is how much education you need. We've determined that 40.4% of Servers have a bachelor's degree. In terms of higher education levels, we found that 2.1% of Servers have master's degrees. Even though some Servers have a college degree, it's possible to become one with only a high school degree or GED.

In addition to switching up your job search, it might prove helpful to look at a career path for your specific job. Now, what's a career path you ask? Well, it's practically a map that shows how you might advance from one job title to another. Our career paths are especially detailed with salary changes. So, for example, if you started out with the role of Office Assistant you might progress to a role such as Executive Assistant eventually. Later on in your career, you could end up with the title General Manager.

Average Salary for a Server

Servers in America make an average salary of $26,857 per year or $13 per hour. The top 10 percent makes over $37,000 per year, while the bottom 10 percent under $19,000 per year.
Average Salary
$26,857
Find Your Salary Estimate
How much should you be earning as an Server? Use Zippia's Salary Calculator to get an estimation of how much you should be earning.
See More Salary Information

Build a professional server resume in minutes. Browse through our resume examples to identify the best way to word your resume. Then choose from 12+ resume templates to create your server resume.

Learn How To Write a Server Resume

At Zippia, we went through countless Server resumes and compiled some information about how to optimize them. Here are some suggestions based on what we found, divided by the individual sections of the resume itself.

Zippia allows you to choose from different easy-to-use Server templates, and provides you with expert advice. Using the templates, you can rest assured that the structure and format of your Server resume is top notch. Choose a template with the colors, fonts & text sizes that are appropriate for your industry. 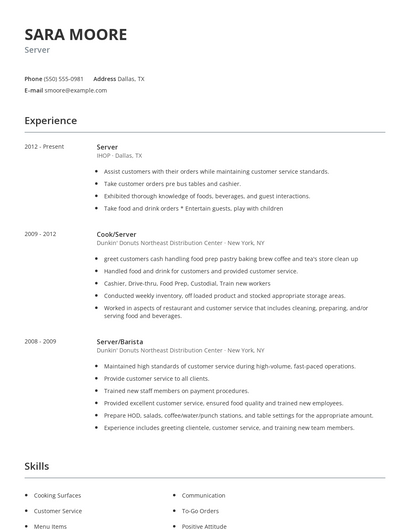 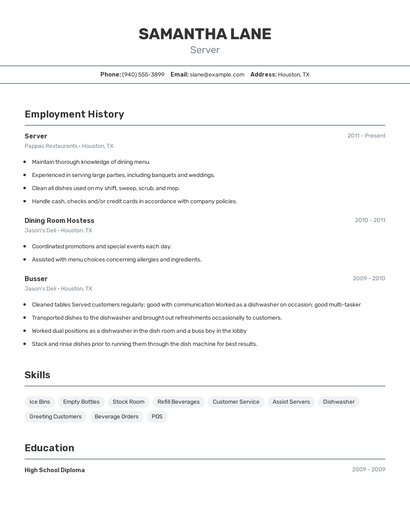 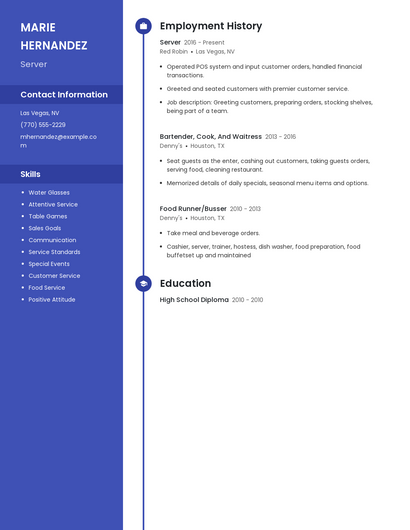 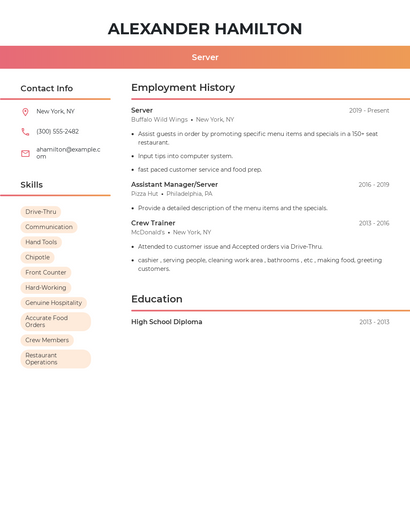 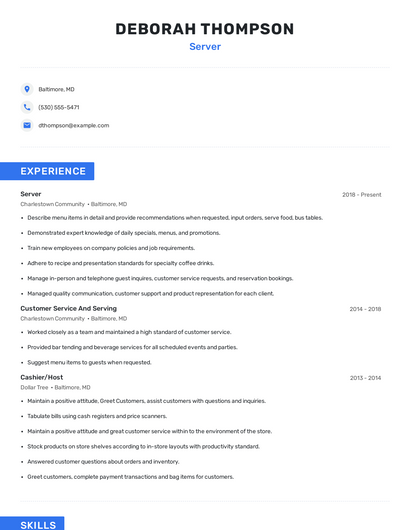 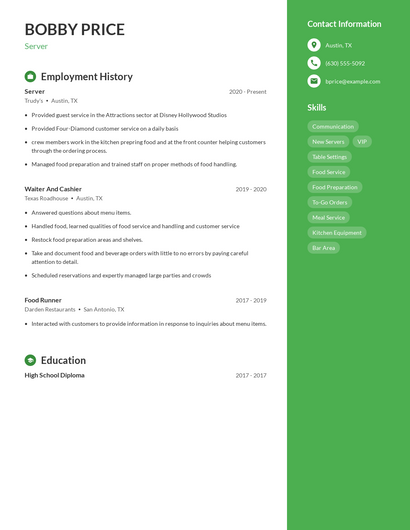 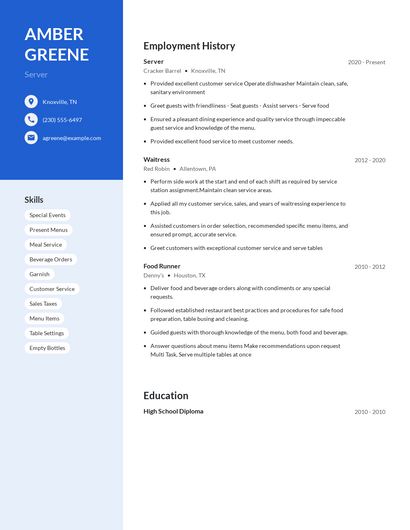 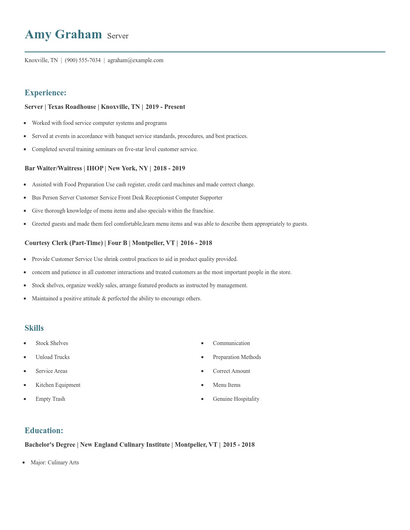 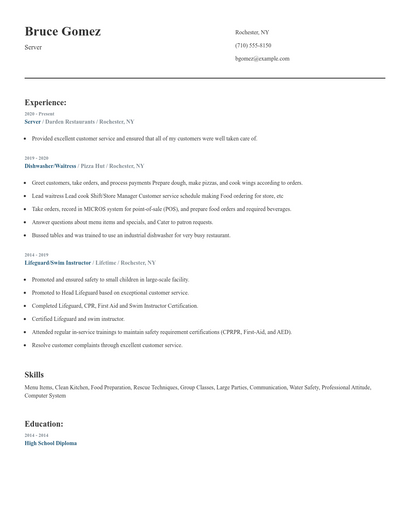 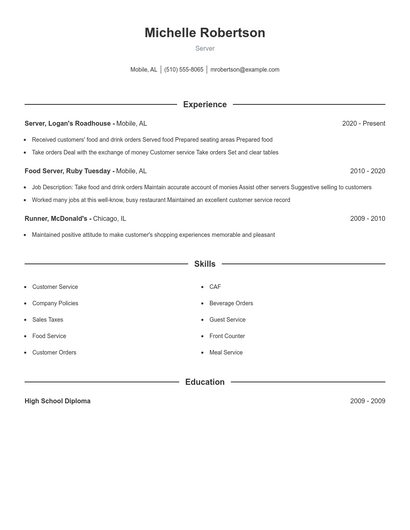 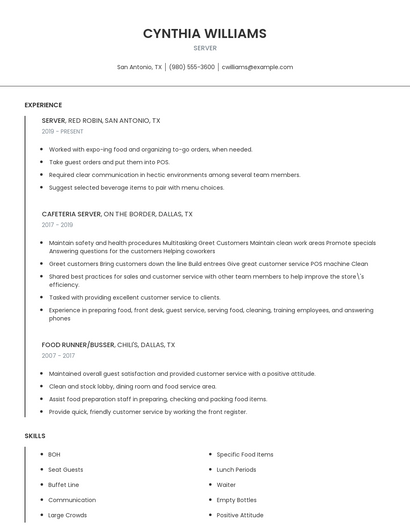 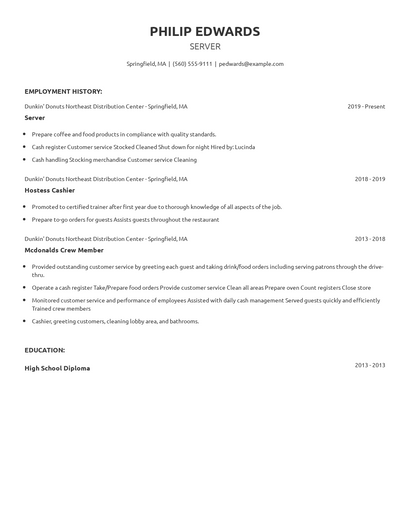 Find the best Server job for you

Find the best Server job for you

View Details on Udemy
The Semantics of First-Order Logic

The focus of this class is on the language of first-order logic , a formally defined language that allows us to make precise and unambiguous statements about any subject of interest. Using the language of first-order logic we will investigate many foundational topics in logic. We will address such questions as what counts as a grammatical expression, and the circumstances under which it makes a claim about the world (whether it can be considered true or false, E.g. “the sky is brown”, as...

Top Skills For a Server

The skills section on your resume can be almost as important as the experience section, so you want it to be an accurate portrayal of what you can do. Luckily, we've found all of the skills you'll need so even if you don't have these skills yet, you know what you need to work on. Out of all the resumes we looked through, 12.8% of Servers listed Guest Service on their resume, but soft skills such as Detail oriented and Communication skills are important as well.

Best States For a Server

Some places are better than others when it comes to starting a career as a Server. The best states for people in this position are Hawaii, New York, California, and Washington. Servers make the most in Hawaii with an average salary of $37,593. Whereas in New York and California, they would average $34,576 and $33,818, respectively. While Servers would only make an average of $32,205 in Washington, you would still make more there than in the rest of the country. We determined these as the best states based on job availability and pay. By finding the median salary, cost of living, and using the Bureau of Labor Statistics' Location Quotient, we narrowed down our list of states to these four.

Total Server Jobs:
1,428
Highest 10% Earn:
$45,000
Location Quotient:
1.27
Location Quotient is a measure used by the Bureau of Labor Statistics (BLS) to determine how concentrated a certain industry is in a single state compared to the nation as a whole. You can read more about how BLS calculates location quotients here

Total Server Jobs:
314
Highest 10% Earn:
$46,000
Location Quotient:
1.07
Location Quotient is a measure used by the Bureau of Labor Statistics (BLS) to determine how concentrated a certain industry is in a single state compared to the nation as a whole. You can read more about how BLS calculates location quotients here

Total Server Jobs:
1,915
Highest 10% Earn:
$52,000
Location Quotient:
0.78
Location Quotient is a measure used by the Bureau of Labor Statistics (BLS) to determine how concentrated a certain industry is in a single state compared to the nation as a whole. You can read more about how BLS calculates location quotients here

How Do Server Rate Their Jobs?

Most Common Employers For Server 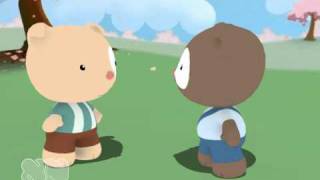 A day in the life of a server 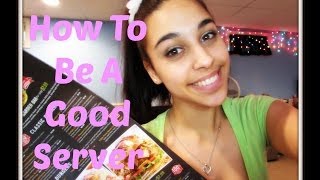 How To Be A More Successful Server (Pt. 1) 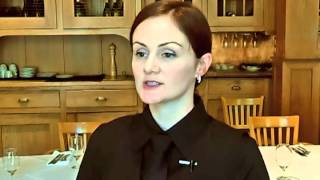 How long does it take to become a Server?

It takes 2 years of professional experience to become a server. That is the time it takes to learn specific server skills, but does not account for time spent in formal education.

The difference in wages means that servers must rely on tips to supplement much of their income which is why a server can make good money, but it is not the norm.

To make the best tip money, a server needs to be good at their job, work during peak hours, and work at a higher-end restaurant where the tips will be higher.

How do I become a server with no experience?

The most crucial skill a person starting as a server should possess is friendliness. Most people do not think of smiling and being friendly as a skill; however, in the hospitality industry, it certainly is.

As a server you will need to offer a warm smile and friendly help to everyone although it is not always natural to be extremely friendly to everyone you meet. Otherwise, you will see diminished enjoyment of the meal from the guests and likely diminished earning potential for you.

How do I start being a waitress?

To start being a waitress, begin working at a casual restaurant. Here, you will learn the necessary skills to advance to a higher-paced waitress position. Before a person applies for a job, they should understand the style of restaurant they will be working for and whether they have the skills and experience to succeed.

Fast food and family-style restaurants are generally the easiest restaurants to get started in as a server. While they can be extremely busy during peak hours, they typically have lower expectations around the server's performance.

While this does not mean a server should perform at a lower quality, it does make it a great place to learn and develop excellent serving skills.

No matter what, the server should guarantee on creating an experience that matches the customers' expectations. At a fast-casual restaurant, diners might only expect servers to take orders promptly and smile.

However, it never hurts to practice going above and beyond expectations if you want to move into other restaurant types as you gain experience.

How does a server work?

A server works by ensuring that diners have a positive experience while eating out. This involves greeting diners as they sit down, handing them menus, taking food and drink orders, and ensuring that everyone gets their food and drinks in a timely manner.

To do this well, servers should develop their ability to anticipate the needs of the guests. A server should always be one step ahead of the guest. If a customer orders a steak dish, then you should promptly reset their plate and include a steak knife.

Or, if you see water glasses getting low, you should already be on hand with fresh water to refill their glasses. Essentially a server works by putting themself in the diner's shoes to meet all their needs promptly.

Is being a server easy?

No, being a server is not easy. Being a server requires long hours with a lot of physical activity. Servers must walk and be on their feet for most of their shift, and often have to carry plates of food and drinks to the tables they are waiting.

The role is not only physically demanding, but also mentally and emotionally demanding. Being a server is a huge mental load on a person since they have to juggle remembering multiple orders and troubleshoot problems that guests might have with their meals or dining experience.

Additionally, this must all be done with a friendly attitude, regardless of how physically or mentally exhausted a server might be during their shift. A server must always greet guests with a smile and present a friendly, helpful attitude throughout their shift.