How to Become a Stationary Engineer

What is a Stationary Engineer

Stationary engineers operate and maintain stationary engines and mechanical equipment. They are tasked with recording data and adjusting manual controls. They also inspect the equipment at periodic intervals to detect malfunctions or the need for repair, adjustment, or lubrication. Stationary engineers earn an average salary of $62,000 annually or $29 per hour.

Stationary engineers work primarily with stationary equipment, hence the title. The equipment is somewhat similar to the ones found on ships or locomotives. Their duties include recording the operation and maintenance actions taken during the shift in the operator's logbook. They are required to work effectively with their hands and possess good mechanical skills to boot. Stationary engineers typically hold a bachelor's degree in any engineering field from an accredited university.

Although, a high school diploma or its equivalent can be used. Most employers require their candidates to possess in-depth knowledge about industrial mechanical systems and hands-on training. Some states also need stationary engineers to pass a written exam and log a certain number of hours to get a license.

There is more than meets the eye when it comes to being a Stationary Engineer. For example, did you know that they make an average of $31.14 an hour? That's $64,761 a year!

What Does a Stationary Engineer Do

There are certain skills that many Stationary Engineers have in order to accomplish their responsibilities. By taking a look through resumes, we were able to narrow down the most common skills for a person in this position. We discovered that a lot of resumes listed Customer-service skills, Troubleshooting skills and Dexterity.

Learn more about what a Stationary Engineer does

How To Become a Stationary Engineer

In addition to switching up your job search, it might prove helpful to look at a career path for your specific job. Now, what's a career path you ask? Well, it's practically a map that shows how you might advance from one job title to another. Our career paths are especially detailed with salary changes. So, for example, if you started out with the role of Building Engineer you might progress to a role such as Maintenance Supervisor eventually. Later on in your career, you could end up with the title Maintenance Director.

Average Salary for a Stationary Engineer

Stationary Engineers in America make an average salary of $64,761 per year or $31 per hour. The top 10 percent makes over $90,000 per year, while the bottom 10 percent under $46,000 per year.
Average Salary
$64,761
Find Your Salary Estimate
How much should you be earning as an Stationary Engineer? Use Zippia's Salary Calculator to get an estimation of how much you should be earning.
See More Salary Information

Learn How To Write a Stationary Engineer Resume

At Zippia, we went through countless Stationary Engineer resumes and compiled some information about how to optimize them. Here are some suggestions based on what we found, divided by the individual sections of the resume itself.

Zippia allows you to choose from different easy-to-use Stationary Engineer templates, and provides you with expert advice. Using the templates, you can rest assured that the structure and format of your Stationary Engineer resume is top notch. Choose a template with the colors, fonts & text sizes that are appropriate for your industry. 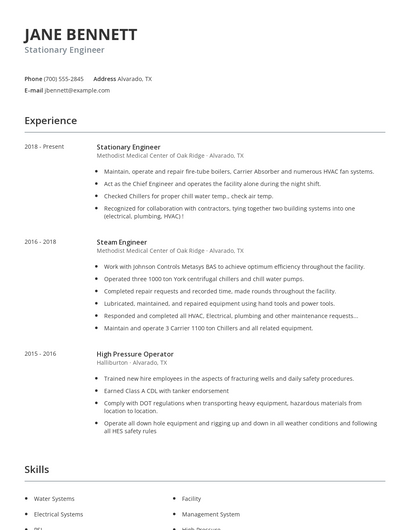 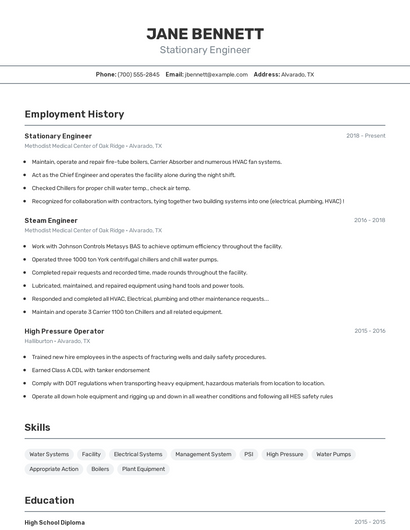 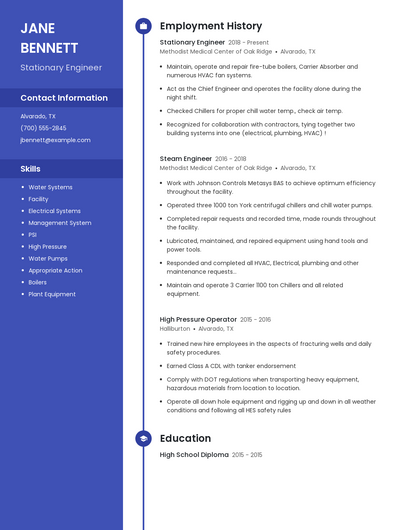 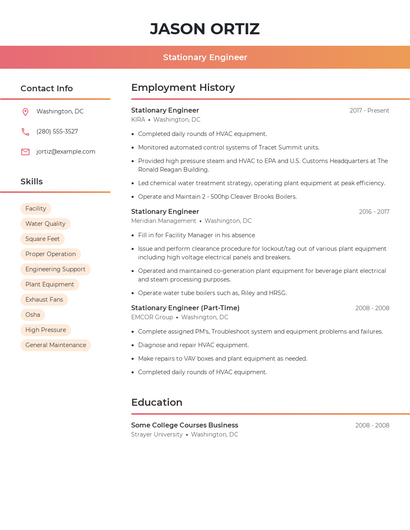 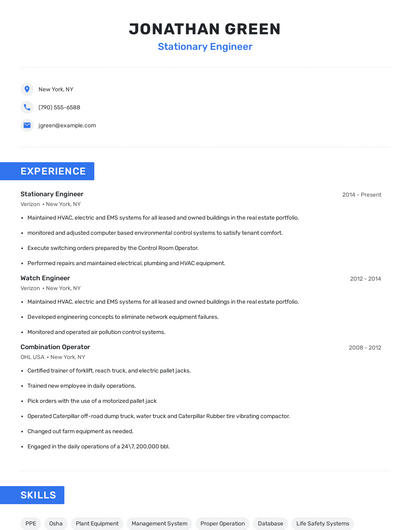 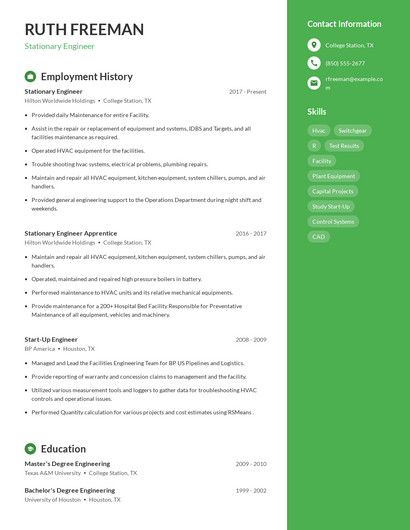 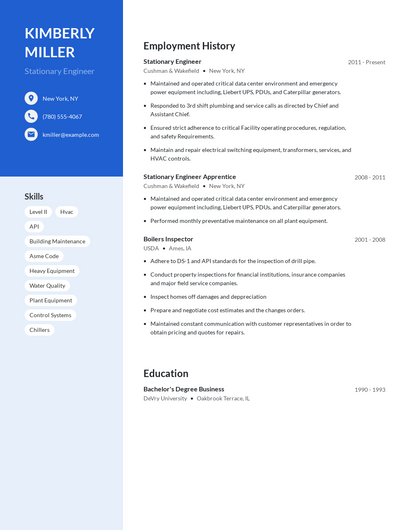 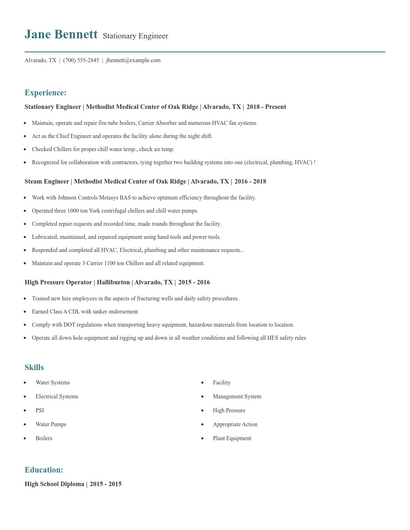 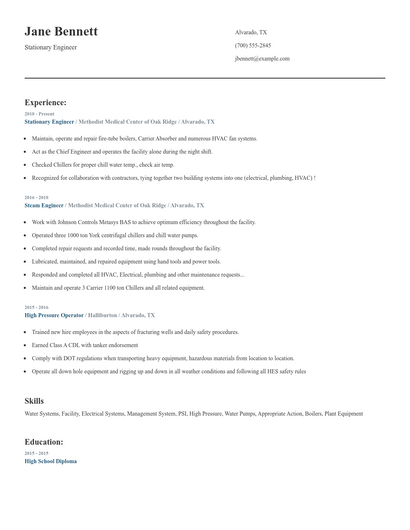 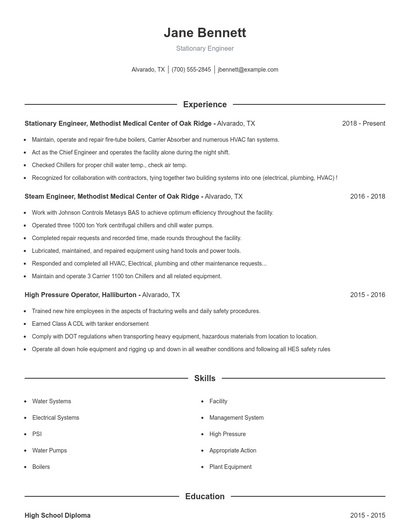 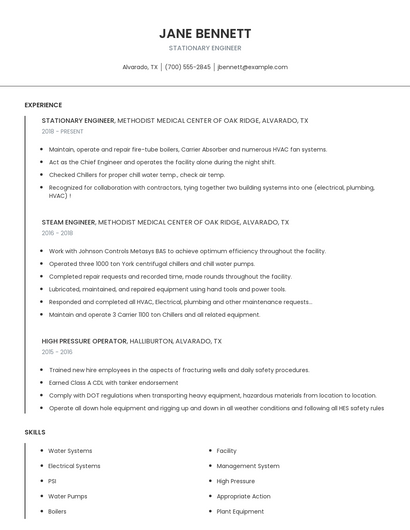 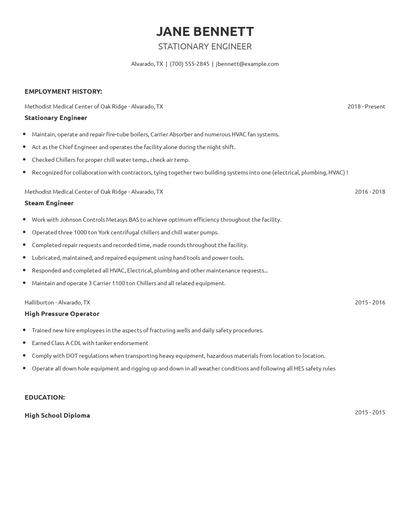 Find the best Stationary Engineer job for you

Find the best Stationary Engineer job for you

Online Courses For Stationary Engineer That You May Like

This course focuses on conventional technologies for drinking water treatment. Unit processes, involved in the treatment chain, are discussed as well as the physical, chemical and biological processes involved. The emphasis is on the effect of treatment on water quality and the dimensions of the unit processes in the treatment chain. After the course one should be able to recognise the process units, describe their function, and make basic calculations for a preliminary design of a drinking...

Top Skills For a Stationary Engineer

The skills section on your resume can be almost as important as the experience section, so you want it to be an accurate portrayal of what you can do. Luckily, we've found all of the skills you'll need so even if you don't have these skills yet, you know what you need to work on. Out of all the resumes we looked through, 9.9% of Stationary Engineers listed Facility on their resume, but soft skills such as Customer-service skills and Troubleshooting skills are important as well.

Best States For a Stationary Engineer

Some places are better than others when it comes to starting a career as a Stationary Engineer. The best states for people in this position are California, New York, Delaware, and Connecticut. Stationary Engineers make the most in California with an average salary of $108,088. Whereas in New York and Delaware, they would average $107,081 and $86,239, respectively. While Stationary Engineers would only make an average of $85,101 in Connecticut, you would still make more there than in the rest of the country. We determined these as the best states based on job availability and pay. By finding the median salary, cost of living, and using the Bureau of Labor Statistics' Location Quotient, we narrowed down our list of states to these four.

Total Stationary Engineer Jobs:
468
Highest 10% Earn:
$161,000
Location Quotient:
1.29
Location Quotient is a measure used by the Bureau of Labor Statistics (BLS) to determine how concentrated a certain industry is in a single state compared to the nation as a whole. You can read more about how BLS calculates location quotients here

Total Stationary Engineer Jobs:
22
Highest 10% Earn:
$125,000
Location Quotient:
1.42
Location Quotient is a measure used by the Bureau of Labor Statistics (BLS) to determine how concentrated a certain industry is in a single state compared to the nation as a whole. You can read more about how BLS calculates location quotients here

Total Stationary Engineer Jobs:
105
Highest 10% Earn:
$119,000
Location Quotient:
1.29
Location Quotient is a measure used by the Bureau of Labor Statistics (BLS) to determine how concentrated a certain industry is in a single state compared to the nation as a whole. You can read more about how BLS calculates location quotients here

How Do Stationary Engineer Rate Their Jobs?

Most Common Employers For Stationary Engineer 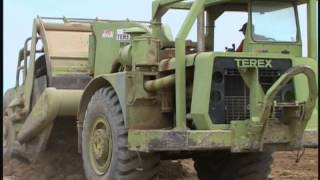 Operating Engineer - What is it and how do you become one? 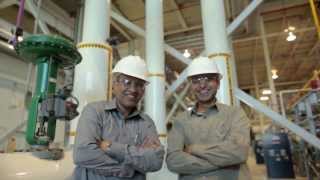 Knowledge is Power. Consider a Career as a Power (Operating) Engineer.