How to Become a Study Director

What is a Study Director

A study director works at a laboratory, university, or other research facility and leads scientific studies. They help design a study, implement it successfully, and oversee all of the administrative work in order to make sure that it is a success. Thanks to their work, toxins are discovered in the environment, new medicines are developed, and other important research breakthroughs are conducted.

Study directors need to be experts at the field they lead studies in, whether it is chemistry or environmental biology. Most have advanced degrees in their field such as a master's degree or a doctorate. Study directors also need many years of practical experience working in research labs before leading studies themselves. They earn an average salary of $67,514 a year.

There is more than meets the eye when it comes to being a Study Director. For example, did you know that they make an average of $33.75 an hour? That's $70,198 a year!

What Does a Study Director Do

There are certain skills that many Study Directors have in order to accomplish their responsibilities. By taking a look through resumes, we were able to narrow down the most common skills for a person in this position. We discovered that a lot of resumes listed Leadership skills, Problem-solving skills and Time-management skills.

Learn more about what a Study Director does

How To Become a Study Director

In addition to switching up your job search, it might prove helpful to look at a career path for your specific job. Now, what's a career path you ask? Well, it's practically a map that shows how you might advance from one job title to another. Our career paths are especially detailed with salary changes. So, for example, if you started out with the role of Director you might progress to a role such as Vice President eventually. Later on in your career, you could end up with the title Vice President.

Average Salary for a Study Director

Study Directors in America make an average salary of $70,198 per year or $34 per hour. The top 10 percent makes over $113,000 per year, while the bottom 10 percent under $43,000 per year.
Average Salary
$70,198
Find Your Salary Estimate
How much should you be earning as an Study Director? Use Zippia's Salary Calculator to get an estimation of how much you should be earning.
See More Salary Information

Zippia allows you to choose from different easy-to-use Study Director templates, and provides you with expert advice. Using the templates, you can rest assured that the structure and format of your Study Director resume is top notch. Choose a template with the colors, fonts & text sizes that are appropriate for your industry. 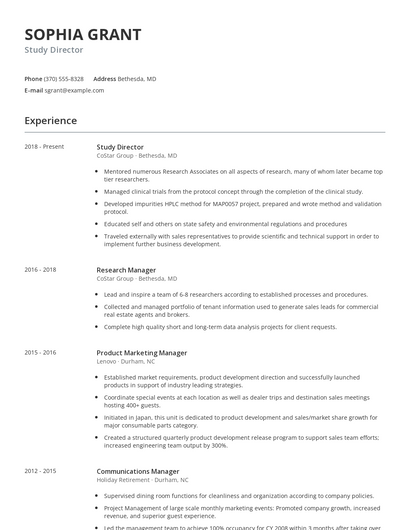 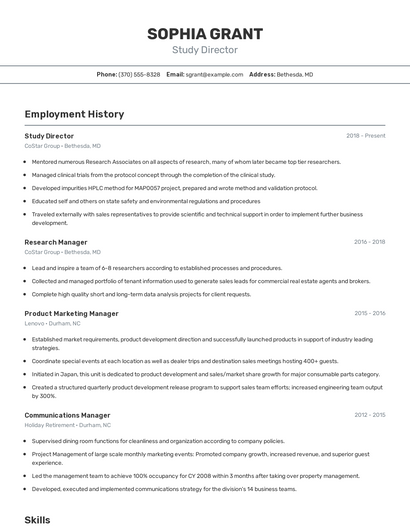 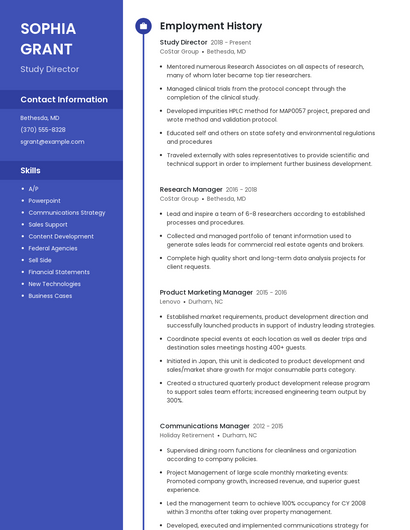 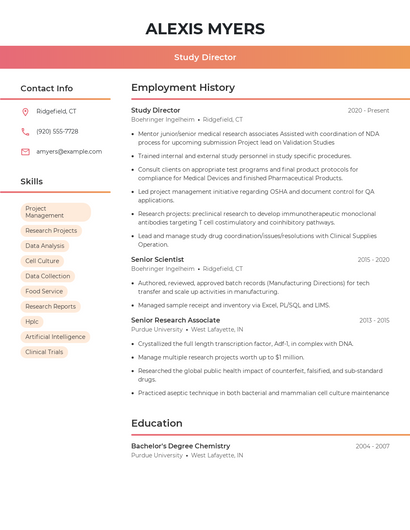 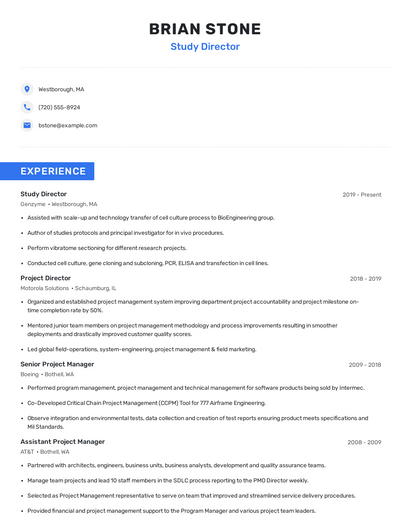 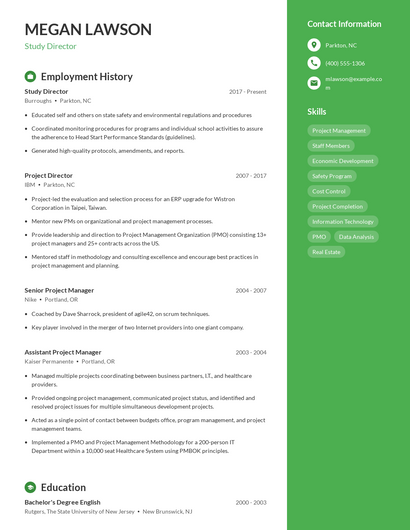 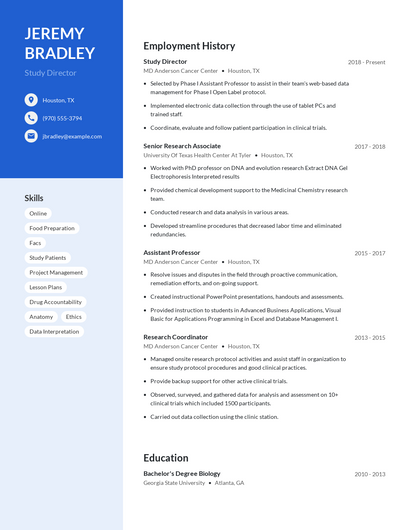 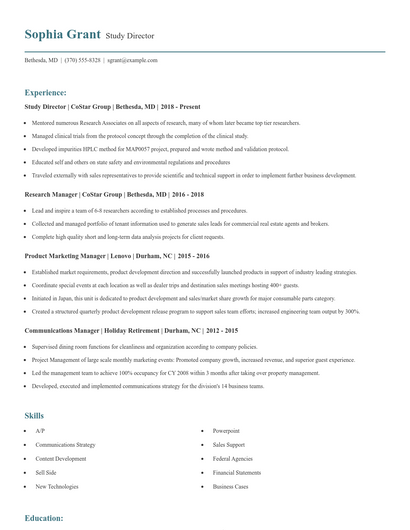 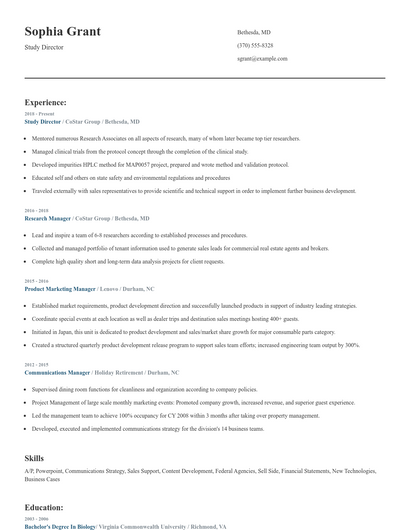 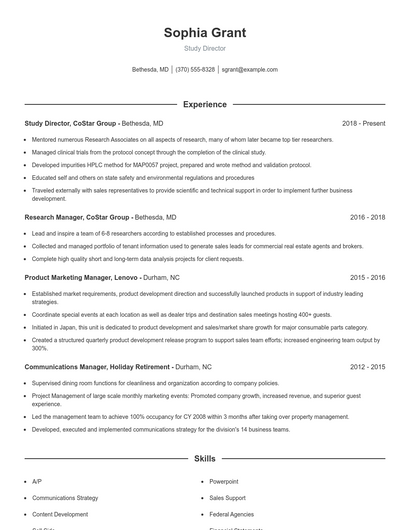 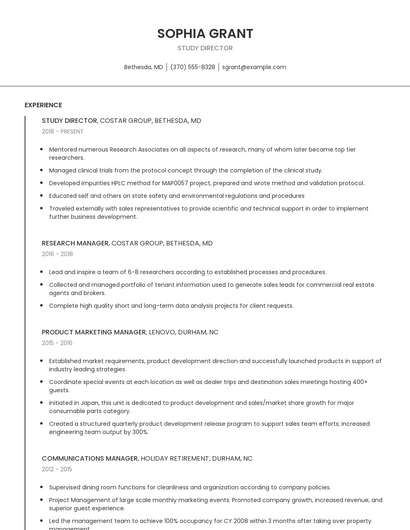 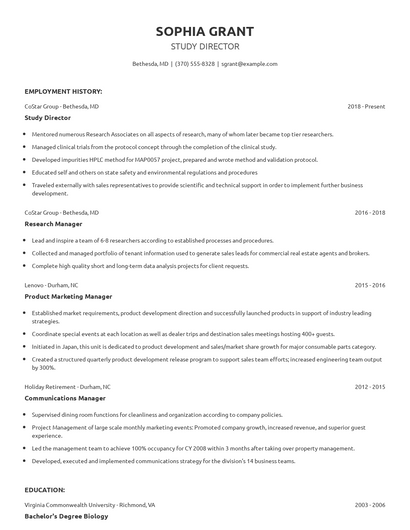 Find the best Study Director job for you

Find the best Study Director job for you

Online Courses For Study Director That You May Like

Choosing an appropriate study design is a critical decision that can largely determine whether your study will successfully answer your research question. A quick look at the contents page of a biomedical journal or even at the health news section of a news website is enough to tell you that there are many different ways to conduct epidemiological research. In this course, you will learn about the main epidemiological study designs, including cross-sectional and ecological studies, case-control...

While randomized controlled trials are considered to be the "gold standard" in health research, they cannot always be performed, for ethical or practical reasons. Observational studies gather information from data that has already been collected, or by observing and measuring patients' changes in health status and their response to interventions outside of a clinical trial. In this course, you will learn to identify the characteristics of observational studies, to interpret the results of...

Power and Sample Size for Longitudinal and Multilevel Study Designs, a five-week, fully online course covers innovative, research-based power and sample size methods, and software for multilevel and longitudinal studies. The power and sample size methods and software taught in this course can be used for any health-related, or more generally, social science-related (e.g, educational research) application. All examples in the course videos are from real-world studies on behavioral and social scie...

Top Skills For a Study Director

The skills section on your resume can be almost as important as the experience section, so you want it to be an accurate portrayal of what you can do. Luckily, we've found all of the skills you'll need so even if you don't have these skills yet, you know what you need to work on. Out of all the resumes we looked through, 8.5% of Study Directors listed Toxicology on their resume, but soft skills such as Leadership skills and Problem-solving skills are important as well.

Best States For a Study Director

Some places are better than others when it comes to starting a career as a Study Director. The best states for people in this position are Connecticut, California, Delaware, and Nevada. Study Directors make the most in Connecticut with an average salary of $96,605. Whereas in California and Delaware, they would average $94,675 and $93,643, respectively. While Study Directors would only make an average of $87,633 in Nevada, you would still make more there than in the rest of the country. We determined these as the best states based on job availability and pay. By finding the median salary, cost of living, and using the Bureau of Labor Statistics' Location Quotient, we narrowed down our list of states to these four.

Total Study Director Jobs:
673
Highest 10% Earn:
$158,000
Location Quotient:
1.12
Location Quotient is a measure used by the Bureau of Labor Statistics (BLS) to determine how concentrated a certain industry is in a single state compared to the nation as a whole. You can read more about how BLS calculates location quotients here

Total Study Director Jobs:
45
Highest 10% Earn:
$152,000
Location Quotient:
0.66
Location Quotient is a measure used by the Bureau of Labor Statistics (BLS) to determine how concentrated a certain industry is in a single state compared to the nation as a whole. You can read more about how BLS calculates location quotients here

Total Study Director Jobs:
118
Highest 10% Earn:
$126,000
Location Quotient:
1.04
Location Quotient is a measure used by the Bureau of Labor Statistics (BLS) to determine how concentrated a certain industry is in a single state compared to the nation as a whole. You can read more about how BLS calculates location quotients here

How Do Study Director Rate Their Jobs?

Most Common Employers For Study Director