How to Become a Supervising Deputy

What is a Supervising Deputy

There is more than meets the eye when it comes to being a Supervising Deputy. For example, did you know that they make an average of $21.27 an hour? That's $44,237 a year!

What Does a Supervising Deputy Do

There are certain skills that many Supervising Deputies have in order to accomplish their responsibilities. By taking a look through resumes, we were able to narrow down the most common skills for a person in this position. We discovered that a lot of resumes listed Communication skills, Empathy and Good judgment.

How To Become a Supervising Deputy

Average Salary for a Supervising Deputy

Supervising Deputies in America make an average salary of $44,237 per year or $21 per hour. The top 10 percent makes over $57,000 per year, while the bottom 10 percent under $34,000 per year.
Average Salary
$44,237
Find Your Salary Estimate
How much should you be earning as an Supervising Deputy? Use Zippia's Salary Calculator to get an estimation of how much you should be earning.

Zippia allows you to choose from different easy-to-use Supervising Deputy templates, and provides you with expert advice. Using the templates, you can rest assured that the structure and format of your Supervising Deputy resume is top notch. Choose a template with the colors, fonts & text sizes that are appropriate for your industry. 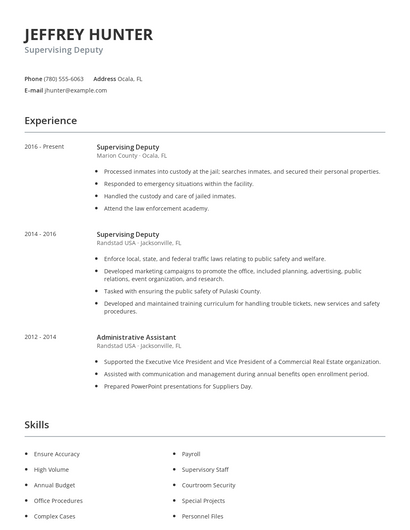 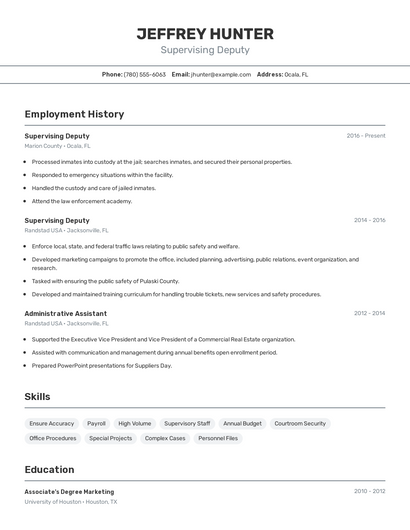 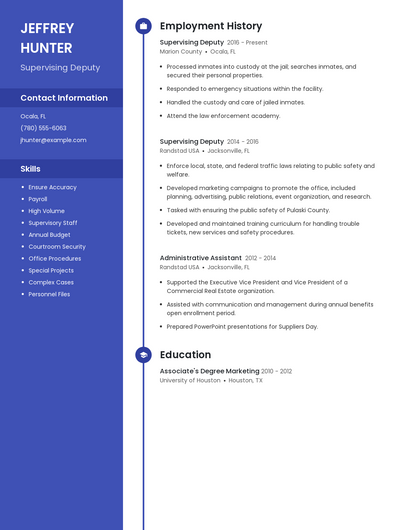 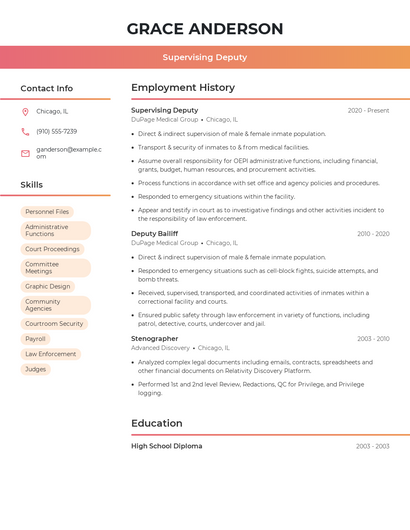 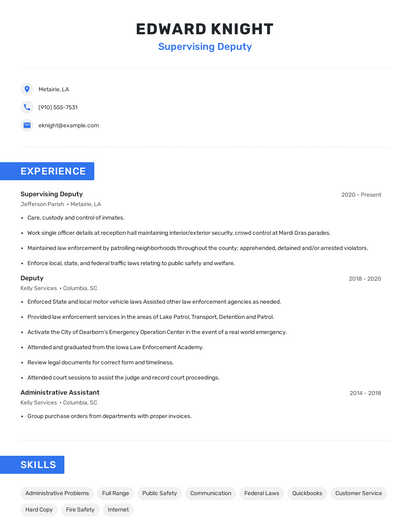 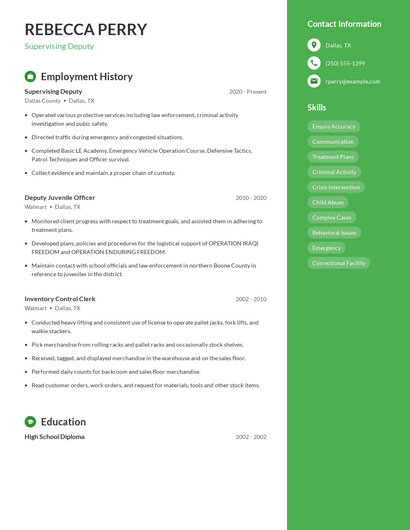 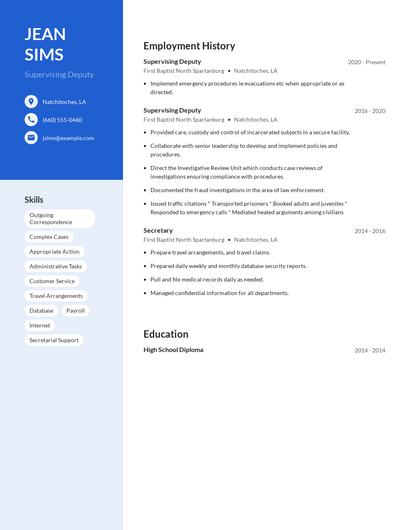 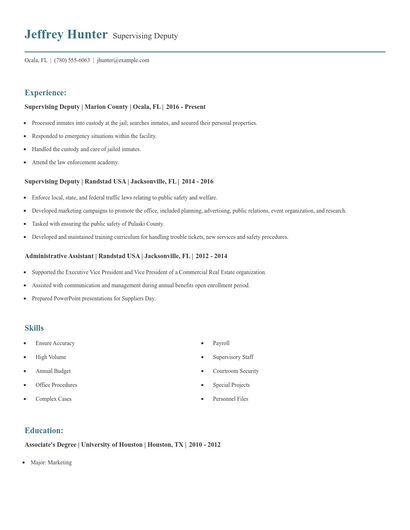 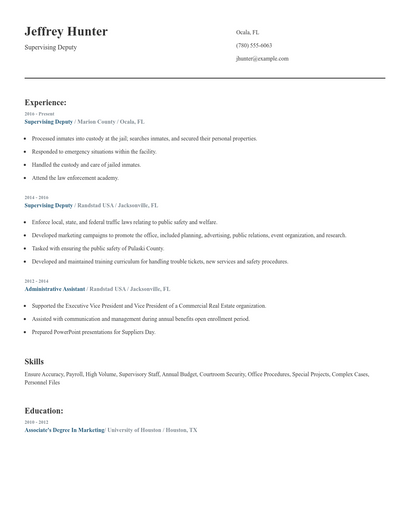 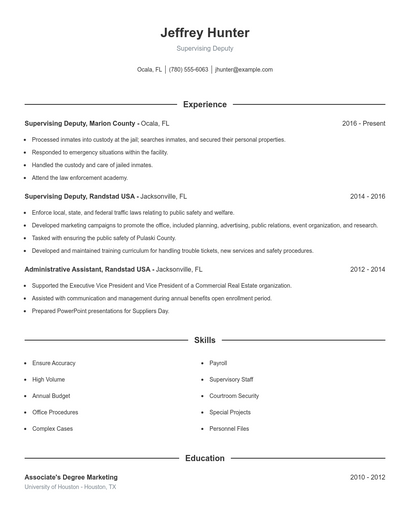 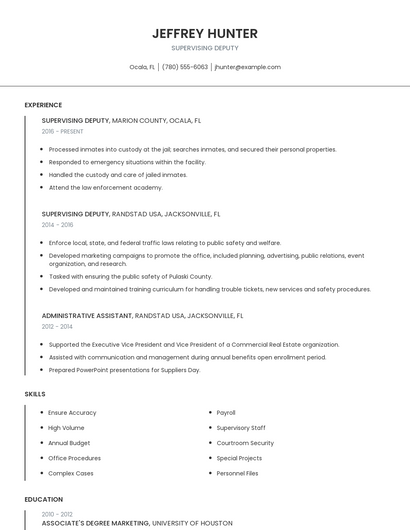 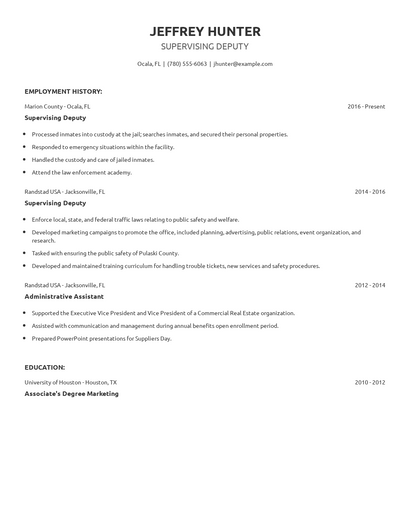 Find the best Supervising Deputy job for you

Find the best Supervising Deputy job for you

Online Courses For Supervising Deputy That You May Like

International Law in Action explains the functions of each international court and tribunal present in The Hague, and it looks at how these institutions address contemporary problems. On the basis of selected cases, and through interviews with judges and lawyers, you will explore the role of these courts and tribunals and their potential to contribute to global justice. The first module of the course will investigate how judicial settlement is different from other more political forms of dispute...

In this fourth and final course of the specialization, you will synthesize your learning into a Strategic Action Plan. The goals of this course are twofold: One, it's for you to identify a specific need or problem within the financial services industry that can potentially be solved using blockchain technology. Two, it's for you to investigate possible solutions to this problem, and to develop a strategic plan for how these solutions might be executed. You will accomplish different project miles...

The University of Baltimore School of Law and Lyle Denniston, who has been covering the Supreme Court of the United States for over five decades, examine the Court’s interaction with America’s political life. From the founding of a new nation - with the creation of a truly national Constitution at the Philadelphia Convention in the summer of 1787 - until the events of our own time, the Supreme Court has been both immersed in the political scene, and apart from it. A basic understanding of...

How Do Supervising Deputy Rate Their Jobs?

Most Common Employers For Supervising Deputy