How to Become a Tool Setter Apprentice

What is a Tool Setter Apprentice

There is more than meets the eye when it comes to being a Tool Setter Apprentice. For example, did you know that they make an average of $19.83 an hour? That's $41,245 a year!

What Does a Tool Setter Apprentice Do

There are certain skills that many Tool Setters Apprentice have in order to accomplish their responsibilities. By taking a look through resumes, we were able to narrow down the most common skills for a person in this position. We discovered that a lot of resumes listed Analytical skills, Manual dexterity and Math skills and computer application experience.

How To Become a Tool Setter Apprentice

In addition to switching up your job search, it might prove helpful to look at a career path for your specific job. Now, what's a career path you ask? Well, it's practically a map that shows how you might advance from one job title to another. Our career paths are especially detailed with salary changes. So, for example, if you started out with the role of Tool And Die Maker you might progress to a role such as Numerical Control Programmer eventually. Later on in your career, you could end up with the title Manufacturing Manager.

Tool Setters Apprentice in America make an average salary of $41,245 per year or $20 per hour. The top 10 percent makes over $55,000 per year, while the bottom 10 percent under $30,000 per year.
Average Salary
$41,245
Find Your Salary Estimate
How much should you be earning as an Tool Setter Apprentice? Use Zippia's Salary Calculator to get an estimation of how much you should be earning. 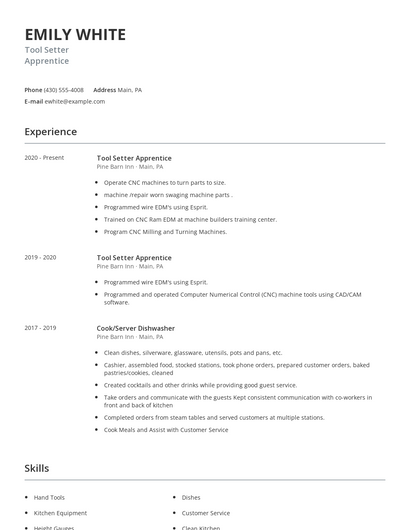 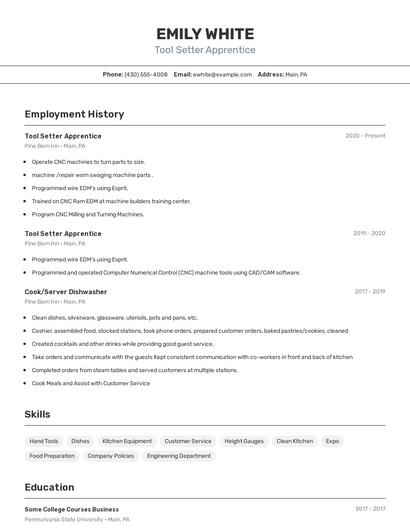 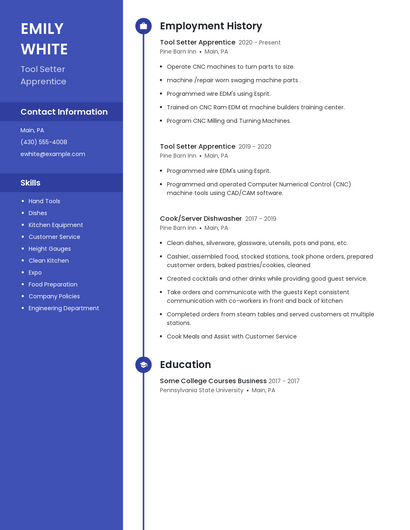 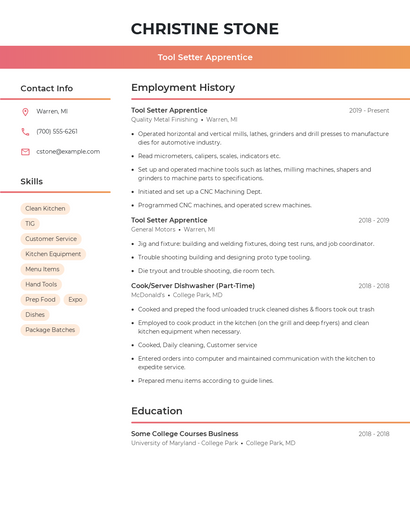 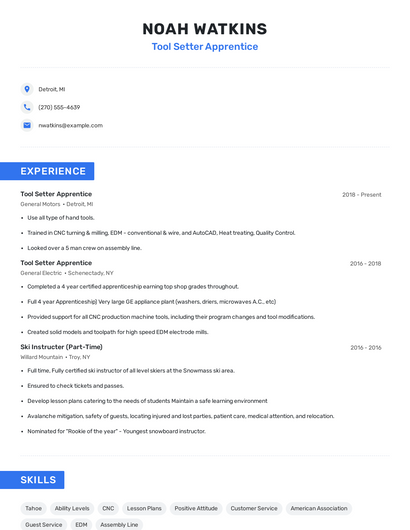 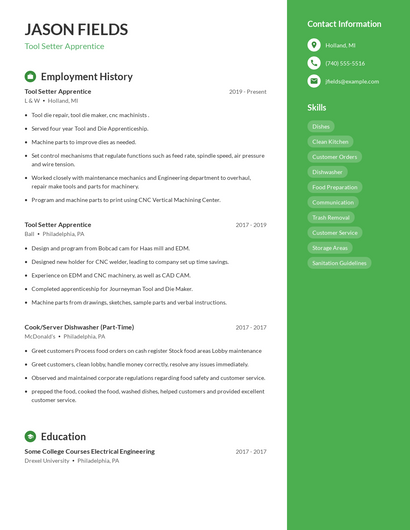 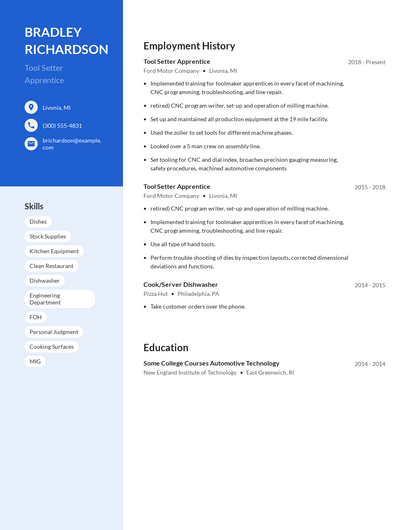 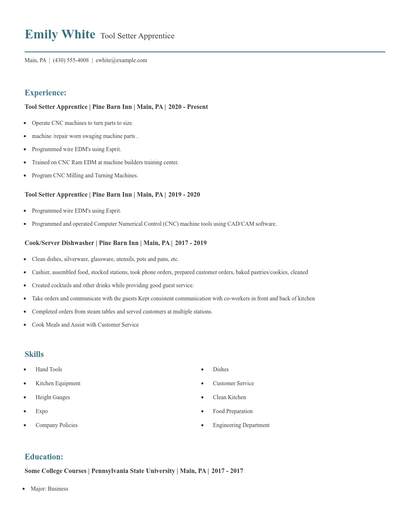 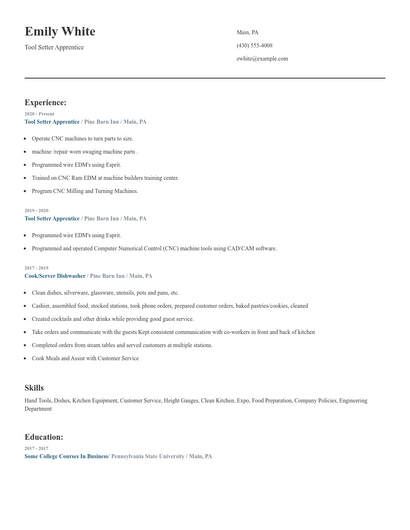 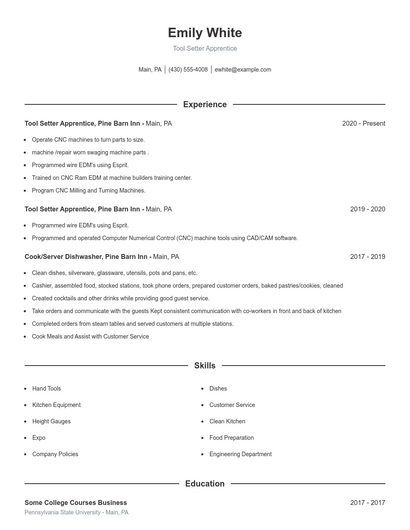 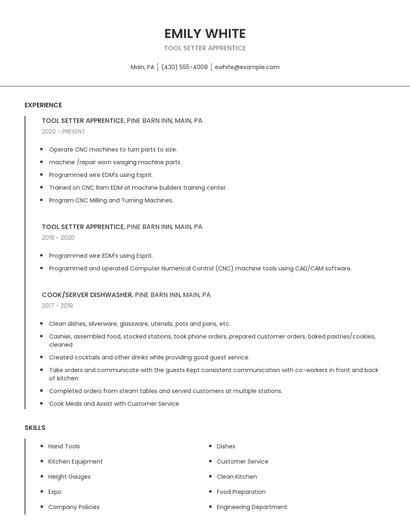 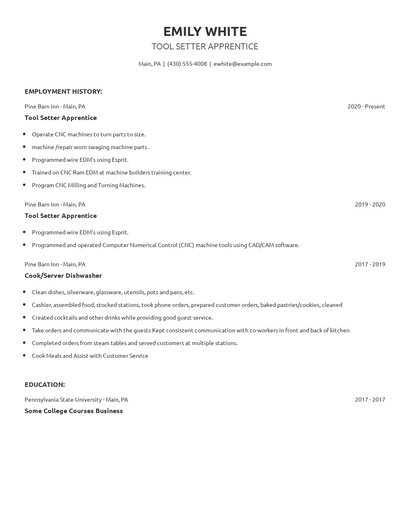 Find the best Tool Setter Apprentice job for you

Find the best Tool Setter Apprentice job for you

Online Courses For Tool Setter Apprentice That You May Like

Learning to read and write CNC programs with FANUC G Code has never been so easy...

View Details on Udemy
Creating Toolpaths for a CNC Lathe

CNC machines come in an almost endless array of configurations for various applications. So far, we have only talked about CNC Mills. More specifically vertical milling centers. In this course we turn our attention to the CNC Lathe. We identify the difference in a lathe's coordinate system, tools, and how to create lathe specific toolpaths. Want to take your learning to the next level? Complete the Autodesk CAD/CAM for Manufacturing Specialization, and you'll unlock an additional Autodesk Creden...

In the third course of Machine Learning Engineering for Production Specialization, you will build models for different serving environments; implement tools and techniques to effectively manage your modeling resources and best serve offline and online inference requests; and use analytics tools and performance metrics to address model fairness, explainability issues, and mitigate bottlenecks. Understanding machine learning and deep learning concepts is essential, but if you're looking to build a...

The skills section on your resume can be almost as important as the experience section, so you want it to be an accurate portrayal of what you can do. Luckily, we've found all of the skills you'll need so even if you don't have these skills yet, you know what you need to work on. Out of all the resumes we looked through, 44.9% of Tool Setters Apprentice listed CNC on their resume, but soft skills such as Analytical skills and Manual dexterity are important as well.

How Do Tool Setter Apprentice Rate Their Jobs?