How to Become a Water Resources Engineer

What is a Water Resources Engineer

Water is life, and controlling water is controlling life. And it's not about being Poseidon or Aquaman. In this case, it's about controlling water through science. This is the Water Resources Engineer's job, dealing with the provision of clean water for the community and the disposal of wastewater.

And if you want a role as god or superhero, you can also separate the waters in two and avoid floods. Of course, obtaining these superpowers is not an easy task.

To become a Water Resources Engineer, you first need a university degree in civil engineering and then a master's degree in water management. This role requires excellent analytical skills. They are usually hired by public or private entities to direct all tasks related to water management, including technical and administrative responsibilities.

It's a lot of work, but $90,000 a year does not sound so bad, and with this being a career with great expectations of growth in the coming years, perhaps the effort will be worth it.

There is more than meets the eye when it comes to being a Water Resources Engineer. For example, did you know that they make an average of $41.9 an hour? That's $87,142 a year!

What Does a Water Resources Engineer Do

There are certain skills that many Water Resources Engineers have in order to accomplish their responsibilities. By taking a look through resumes, we were able to narrow down the most common skills for a person in this position. We discovered that a lot of resumes listed Imagination, Writing skills and Problem-solving skills.

Learn more about what a Water Resources Engineer does

How To Become a Water Resources Engineer

As you move along in your career, you may start taking on more responsibilities or notice that you've taken on a leadership role. Using our career map, a Water Resources Engineer can determine their career goals through the career progression. For example, they could start out with a role such as Project Manager, progress to a title such as General Manager and then eventually end up with the title Construction Manager.

Water Resources Engineers in America make an average salary of $87,142 per year or $42 per hour. The top 10 percent makes over $140,000 per year, while the bottom 10 percent under $53,000 per year.
Average Salary
$87,142
Find Your Salary Estimate
How much should you be earning as an Water Resources Engineer? Use Zippia's Salary Calculator to get an estimation of how much you should be earning.
See More Salary Information 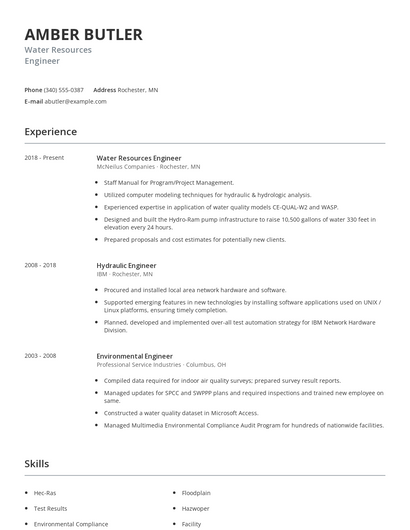 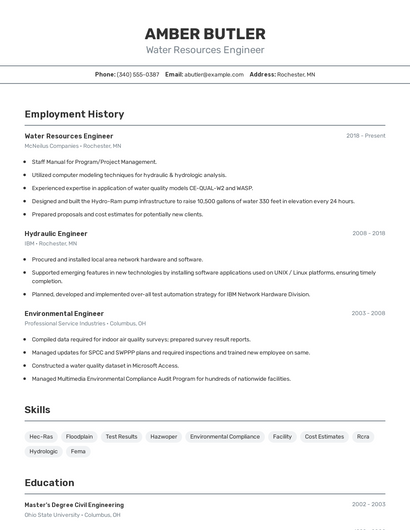 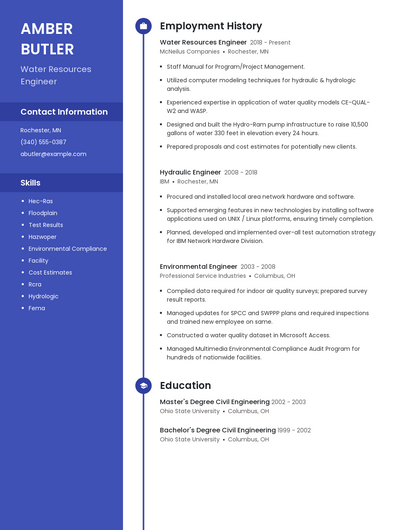 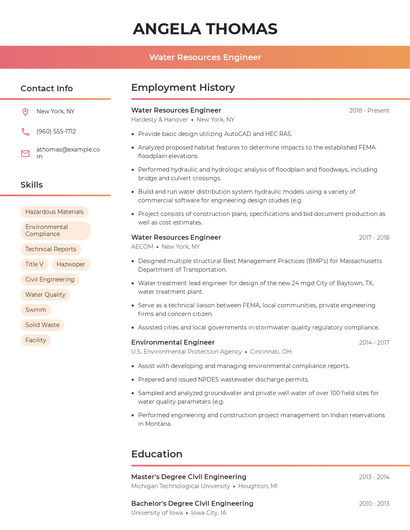 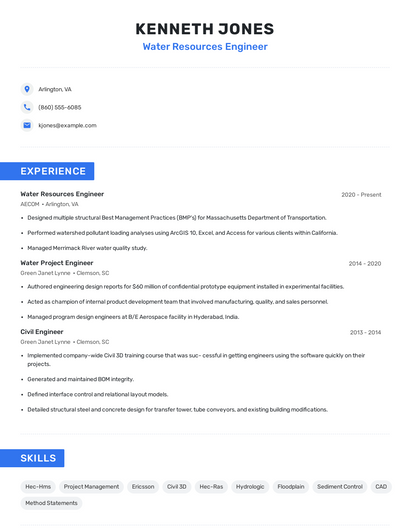 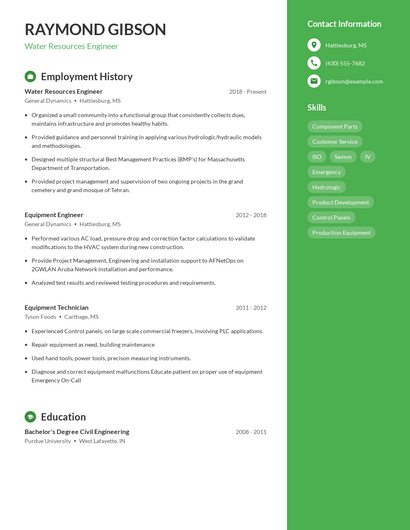 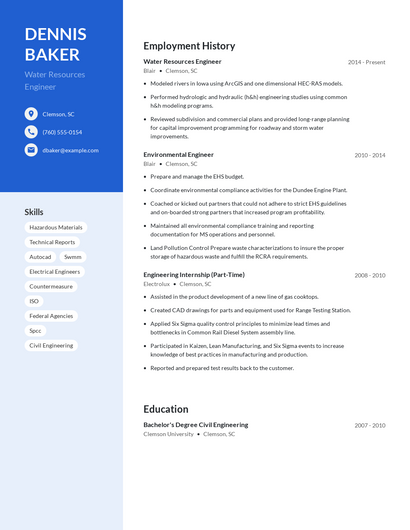 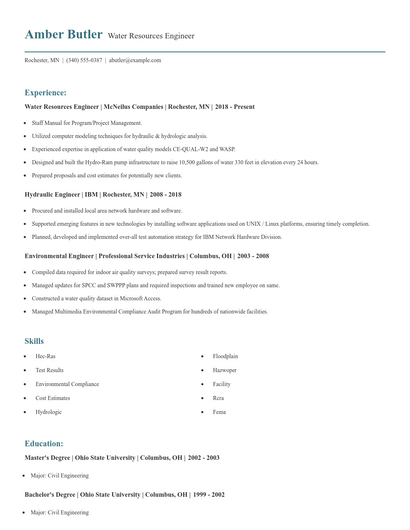 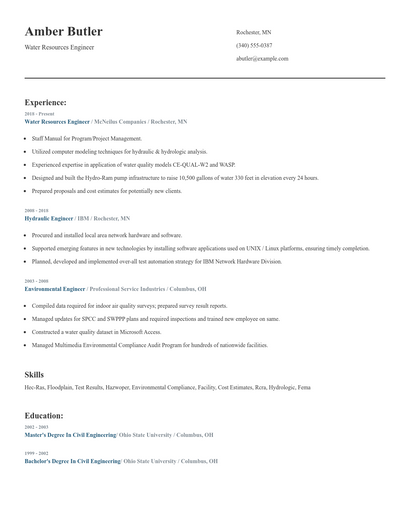 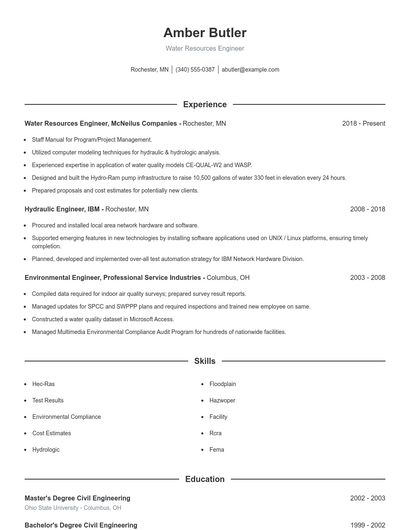 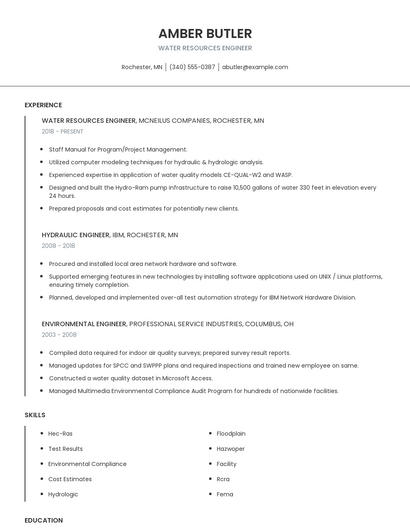 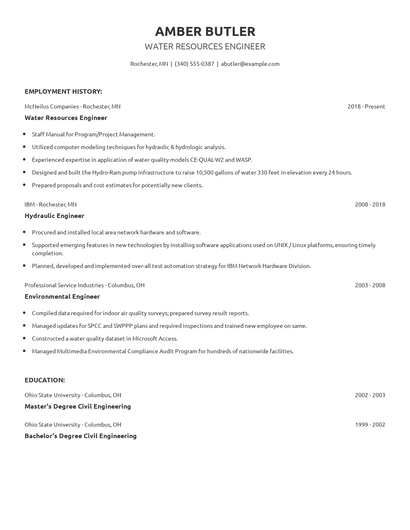 Find the best Water Resources Engineer job for you

Find the best Water Resources Engineer job for you

Online Courses For Water Resources Engineer That You May Like

Water management today is faced with new challenges such as climate change or the effects of human activity. Public and private stakeholders who are active in this field must develop new ways to better manage the water cycle "as a whole". The objective of this MOOC is to develop an understanding of the problems related to water management. Firstly, this course will define a resource and, more specifically, the resource of water. It will look at how water is used and the activities associated wit...

Increasingly scarce natural resources Worldwide, a variety of processes puts more pressure on water resources every day. Global climate change causes temperatures to rise and precipitation patterns to change. A growing degree of urbanization causes people to move from the countryside to the cities. This results in increased competition over water resources, like rivers and groundwater, between cities and their surrounding areas. Furthermore, population growth and rising global welfare create an...

View Details on edX
Introduction to Water and Climate

Water is essential for life on Earth and of crucial importance for society. Water also plays a major role in affecting climate. Its natural cycle, from ocean to atmosphere by evaporation, then by precipitation back to land returning via rivers and aquifers to the oceans, has a decisive impact on regional and global climate patterns. For those interested in engineering, climate science and environmental studies, this course offers a first introduction to the physics of water systems and their...

The skills section on your resume can be almost as important as the experience section, so you want it to be an accurate portrayal of what you can do. Luckily, we've found all of the skills you'll need so even if you don't have these skills yet, you know what you need to work on. Out of all the resumes we looked through, 9.4% of Water Resources Engineers listed Hydrologic on their resume, but soft skills such as Imagination and Writing skills are important as well.

Some places are better than others when it comes to starting a career as a Water Resources Engineer. The best states for people in this position are California, Oregon, North Dakota, and Maine. Water Resources Engineers make the most in California with an average salary of $111,346. Whereas in Oregon and North Dakota, they would average $108,533 and $102,881, respectively. While Water Resources Engineers would only make an average of $101,408 in Maine, you would still make more there than in the rest of the country. We determined these as the best states based on job availability and pay. By finding the median salary, cost of living, and using the Bureau of Labor Statistics' Location Quotient, we narrowed down our list of states to these four.

Total Water Resources Engineer Jobs:
418
Highest 10% Earn:
$164,000
Location Quotient:
1.34
Location Quotient is a measure used by the Bureau of Labor Statistics (BLS) to determine how concentrated a certain industry is in a single state compared to the nation as a whole. You can read more about how BLS calculates location quotients here

Total Water Resources Engineer Jobs:
3,078
Highest 10% Earn:
$175,000
Location Quotient:
1.4
Location Quotient is a measure used by the Bureau of Labor Statistics (BLS) to determine how concentrated a certain industry is in a single state compared to the nation as a whole. You can read more about how BLS calculates location quotients here

Total Water Resources Engineer Jobs:
136
Highest 10% Earn:
$157,000
Location Quotient:
1.1
Location Quotient is a measure used by the Bureau of Labor Statistics (BLS) to determine how concentrated a certain industry is in a single state compared to the nation as a whole. You can read more about how BLS calculates location quotients here

How Do Water Resources Engineer Rate Their Jobs?