by Kathy Morris
Study - 9 months ago

Boston, Massachusetts is a charming city with a lot to offer- from great jobs to a vibrant cultural scene and exciting events.

However, as exciting as Boston may be, city living isn’t for everyone. While many flock to Boston for jobs, many are migrating to nearby suburbs in search of more space and good schools for their growing families.

Yet, many who move to the suburbs still commute to Boston for work to pull in a Boston-sized paycheck. Since commuting can be expensive, time consuming, and decrease overall job satisfaction, choosing the right suburb is essential. We dove into the data and uncovered the Boston suburbs where commuting families thrive.

Here are the top 10 best suburbs for a working family in commuting distance to Boston. We breakdown how we identified these Goldilocks suburbs next, but you can scroll down to see why these cities made the grade.

How We Determined The Best Boston Suburbs For Commuting Families

We rated Boston suburbs in close proximity to Boston on five areas:

We gathered data on commute times using Google maps. Each city was ranked based on how long it takes a car to reach Boston with a departure time of 7:30 AM. We always went with the highest number in the range, because traffic is real and delays happen. If you’re Speed Racer, you might could knock off 5 minutes, but for most commuters these are a pretty good estimate at what they can expect. The lower the commute time, the better the ranking.

For crime, we used the FBI’s data on violent crimes per 100,000 people. This doesn’t take into account non-violent crimes such as someone rifling through your car (or stealing your car). However, typically these numbers have a fairly linear relationship. It should go without saying, but the less crime the better.

House prices and household income were both obtained from the Census’ 2018 Community Survey. The lower the house price the better. Cheaper housing and more space are huge motivators to move somewhere with a little bit more sprawl. On the opposite end of the spectrum, the more income the better, because who doesn’t want to make more money?

Finally, our data on school ratings came from BetterSchools, all the public schools with ratings were averaged together to produce an average district wide score for each city. The higher the school ranking, the better. While Massachusetts in general has better public schools than most of the United States, parents always want the best education possible for their kids. No doubt, every young Bostonian has a friend or associate who has recently moved to the ‘burbs “for the schools.”

These metrics put into numbers the key questions people ask when seeking to move: “Can I afford it?”, “Do the schools sucks?”, “Is it too far away?” and, “Is it a good area?”

Belmont, Massachusetts is the best Boston suburb for commuting families. While it has one of the longer commutes in the top 10 at 40 minutes, in exchange for that chunk of time, Belmont offers excellent schools and an exceptionally low crime rate. Medford is the second best Boston suburb for commuting families. While, Medford’s schools and crime are fairly middle of the pack, the city still has a lot to offer. One big reason Medford is a great place to live? The short commute. It’s 14 minutes closer to Boston. That adds up to an extra two hours a week, 8 hours a month, and 96 hours a year– the equivalent of two extra weeks of vacation. Right behind Medford, we have Arlington. Arlington families can take advantage of a great public school system. While the 50 minute commute on bad days may grate, the mortgage payment won’t be as hefty as neighboring Belmont. Which is nice. People who house shop in Belmont, might turn an eye to Brookline as well. While the average home will set you back more than Boston, citizens of Brookline enjoy excellent public schools and a commute about the length of your average tv show. Newton, Massachusetts is a good choice for commuting families looking to live a stone’s throwaway from Boston. While the houses certainly go for more than Boston and a couple other choice cities on our list, they come with a great public school system.

The ocean-side suburb of Winthrop is sixth best Boston suburb. In addition to a shockingly pleasant commute and home prices significantly below Boston, Winthrop residents are right next to the airport. For a commuting family who travels frequently for business or pleasure, that will be hard to beat.

With a commute this short and home prices so much lower than the Boston metro area, Revere might as well be shouting, “The millennials are coming.” Who can beat a mile drive to downtown Boston and all that comes with it?

Chelsea has the shortest commute and the cheapest home prices of all the Boston suburbs on our list. For Bostonians looking to relocate because they quite simply can’t afford home ownership in the city, Chelsea is a winner. It may not be in Boston, but with a commute that short it offers all the affordability of the suburbs with most of the conveniences of the city. 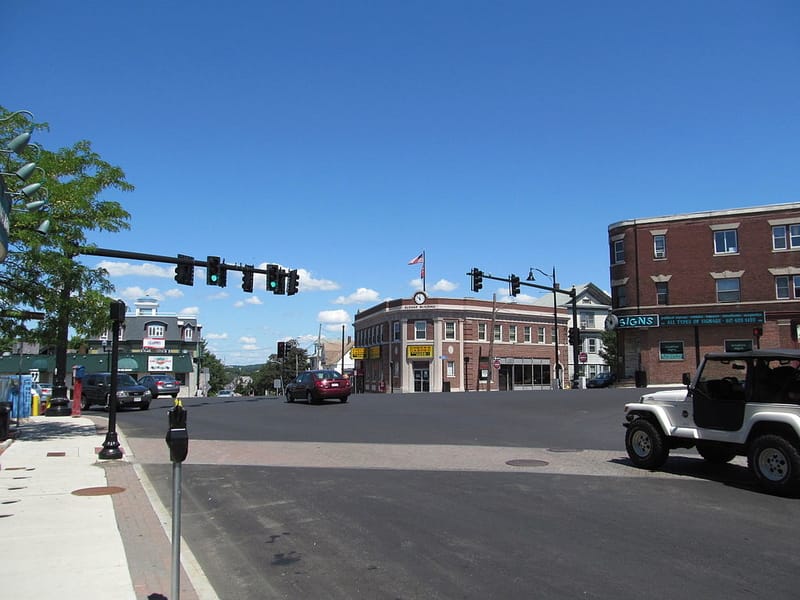 Somerville isn’t as cheap as some of the other Boston suburbs, and its schools are middle of the back. However, for families seeking a balance in affordability, proximity to Boston, and a public school system you don’t grit your teeth before sending your kids to, Somerville is still a great choice. If that isn’t enough, it’s the home of marshmallow fluff- which while not a factor we ranked on, is worth recognizing. Watertown may be the last city on our list, but it is still a thriving city for commuting families. Families can expect a bigger yard than Boston, at a smaller mortgage. Throw in a fairly low crime rating and a reasonable commute, and it’s not hard to see why so many families call it home.

These are the 10 Boston suburbs that have the most to offer commuting families. When we examine housing costs, schools, crime, and proximity, these cities stack up very favorably.

However, ultimately where you live is a highly personal decision. While we ranked all metrics equally, if you hate driving, Chelsea may be your personal #1. If a world class school system is your must-have, no amount of money saved on a house will convince you that an alright school district is good enough.

Check out the full data below: