The Hardest Working City In Each State For 2019 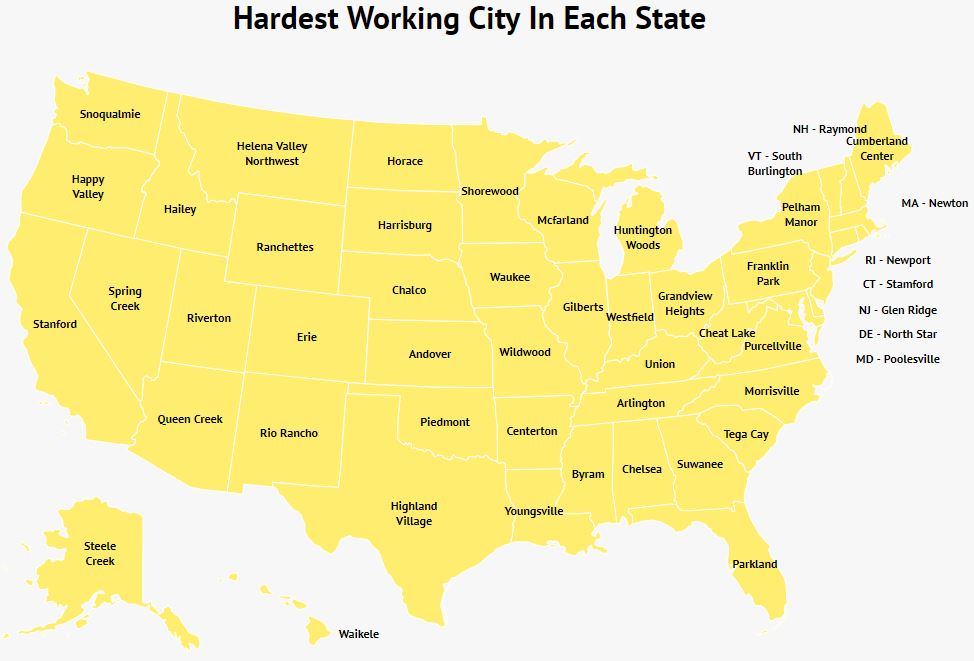 Hard work is something that is considered one of the fundamentals to building a great life, and here in the land of opportunities, hard work is generally rewarded.

People from all over the world move to America because of this promise — The promise of a better life and value for your hard work.

In fact, according to the Organization for Economic Cooperation and Development (OECD), Americans are the 11th hardest working among 36 nations that are members of this organization.

People everywhere work hard each day, but do you ever wonder which city in your state is the most hardworking?

Interesting question, yes. Figuring out the leader of this work-around-the-clock ethos is not as easy as you might think.

And yet, we at Zippia, are never shy when it comes to mining through data and crunching some numbers for you.

Ready to find out which cities rank the highest?

We will get to the full list of the top city in each of the 50 states in just a little bit. But first here’s the top 10:

Here are the hardest working of the most hardworking cities in America for 2019:

The most interesting thing about this ranking is the fact that none of these are big cities. In fact, Parkland, FL with a population of 32,202, is the biggest city on the list.

One thing to note is that most of these places are suburbs of big cities.

Like all answers we have come up with here at Zippia, we started with data for this one too.

In particular, we went to the latest American Community Survey Data and the Bureau of Labor Statistics.

After scrolling through what seemed like hundreds of criteria, we settled on this set of factors:

Our thinking went something along the lines of this — if you spent a considerable time getting a degree, if you work a ton of hours, and if you spend hours braving traffic to get to this said place of work, so you can work hard, you get the Zippia hardworking stamp of approval.

Based on the above criteria, we ranked each city in America — the higher a city ranked in any of these areas, the more hardworking, we determined, it was. We then took a closer look at each of the 50 states, and ranked the cities in each state from the most to the least hardworking.

This helped us calculate the hardest working city in each state.

No 1 on our list is Pelham Manor in the state of New York. It is a just 17 miles from New York City, and it is one of the oldest towns in the country, dating back to 1654.

People in this town have spent a long time in school, and now they continue to work long hours at work, making this town the hardest working town in New York.

25 miles from Seattle is the beautiful city of Snoqualmie. Don’t let the prettiness and quiet charm of this Washington state city fool you, because people here work pretty hard so that they enjoy life in this town.

You might’ve actually seen this town on TV, as this is where David Lynch’s Twin Peaks was shot. Ooooh, spooky.

Number 4 on our list is Ohio with Grandview Heights. This was the first suburb of Columbus, and just like the other cities on this list, people here love to work hard.

North Carolina is number 5 hardest working, thanks to the city of Morrisville. Morrisville is part of the Research Triangle metropolitan area, and it is home to computer technology, biotech, and telecommunications industry.

Graduates from Duke University and The University of North Carolina at Chapel Hill keep the economy of this area thriving.

This town of around 8000 is the hardest working in the state of Illinois.

Workers here average over 40 hours per week, and their hard work has put this town on our top 10 list.

One cool fact about this town is that none of the families here live below the national poverty line. Hard work pay off, right?

Colorado is next on our list, and it is because of the little town on Erie, named after the Pennsylvania town…any guesses?…Erie.

The median household income in this town is close to $100,000, and people here are the most hardworking in Colorado.

This quaint New Jersey town is most known for its historic gas lamps. One of the hardworking people who was born in this Jersey town is Buzz Aldrin from the Apollo 11 mission to the moon.

Keep working and reach for the moon, guys.

California can’t be not on here, with all the entrepreneurs working non-stop to launch the next big thing. This time it is because of the city of Stanford.

Of all the cities on our hardest working list, Stanford has the highest number of people with college degrees — 94 percent of its population. That is a whole lot of studying and a whole lot of hard work right there.

This Florida city is the largest, in terms of population, on our top 10.

In a state where people go to retire, people in this city are working hard, and their hard work has put the state at number 10.

And there you have it — These are the hardest working cities in America.

To see which city is the hardest working in your state, check out this table. 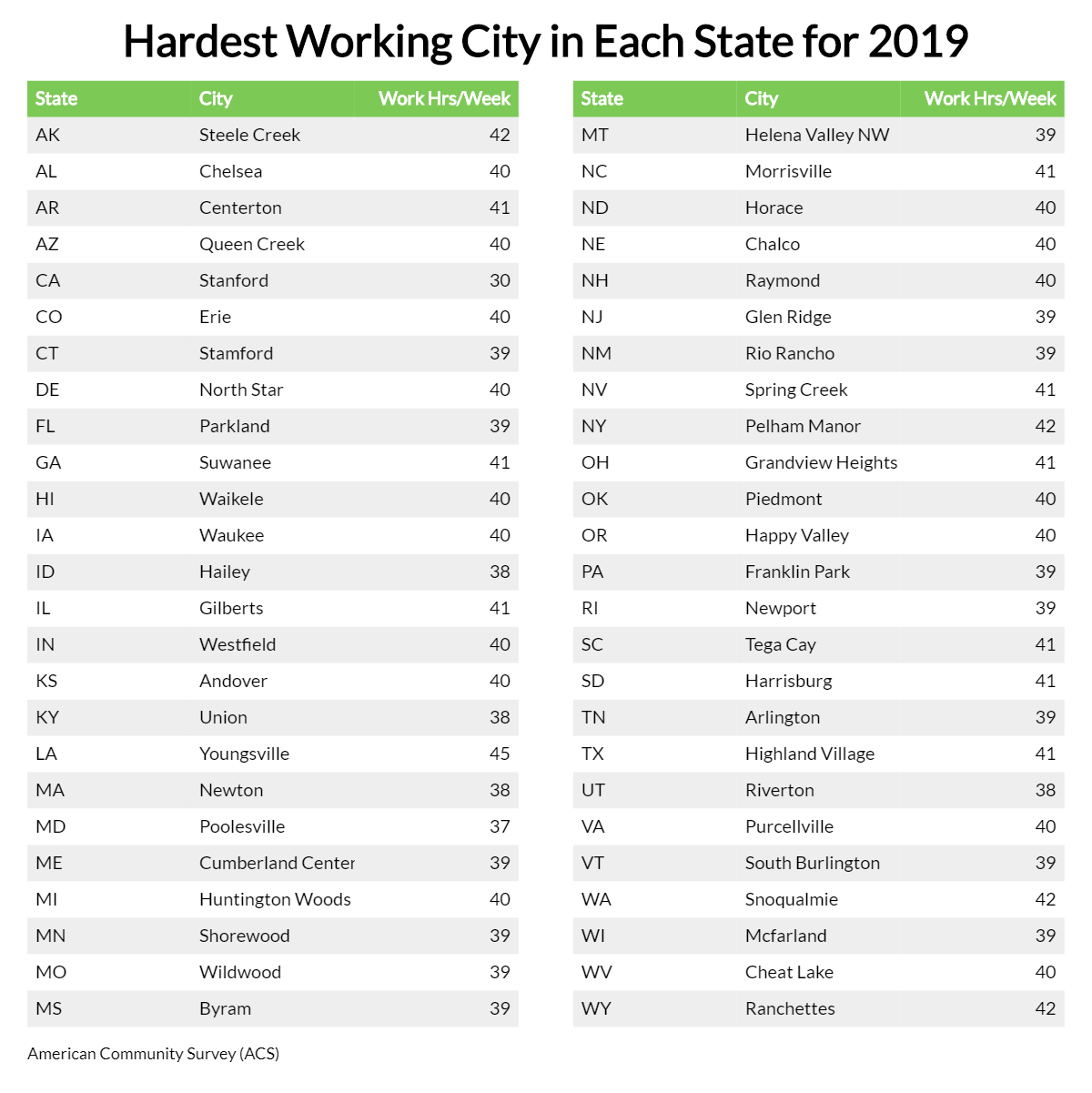