The Jobs You’ll Work When You Retire 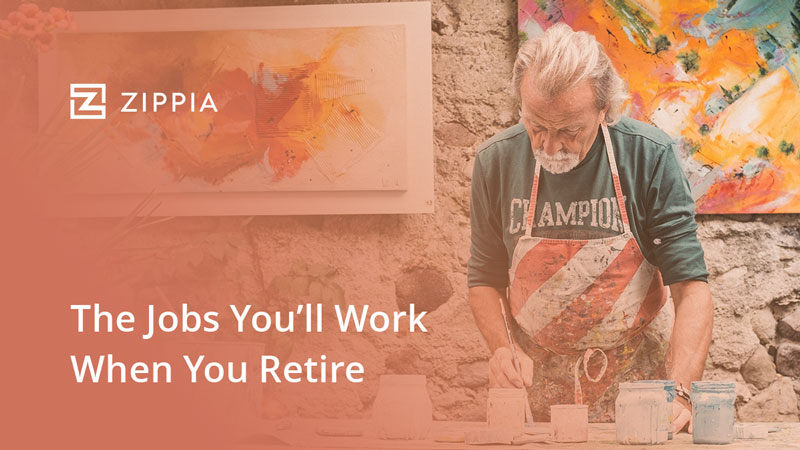 Have you thought about how you’ll spend your days when you reach retirement age? Maybe sleeping in, golfing, and going out for an early bird special dinner at a reasonable hour — say, 4:30? Well, this bearer of bad news is here to inform you that those timeless stereotypes are short-lived.

According to data trends, you’re more likely to wake up early and work a part-time shift at the pro shop or Denny’s register than you are to actually retire at retirement age.

Consider this: while the labor force is projected to grow over the next decade at an average annual rate of 0.5 percent — a slower rate than in recent decades — that same report said:

The labor force will continue to age, with the average annual growth rate of the 55-years-and-older group projected to be 1.8 percent, more than three times the rate of growth of the overall labor force.

So to give you a better idea of how you’ll be spending your bronze golden years, we looked at the types of jobs most commonly held by the elderly, as well as the jobs that the older generations tend to make up the most of.

The ten jobs that older Americans work the most

But first, what exactly is retirement age?

When we do studies like these, the first thing we need to do is set some guidelines, like what does it mean to be a robot or what qualifies as a small college — and before discussing “retirement age” jobs, we have to define it.

The American Association of Retired Persons, more commonly known as AARP opens up membership to fifty-year-olds — but that hasn’t been a realistic retirement age for decades, even though various pensions had a tendency to kick in after twenty years.

Social Security’s full retirement age (FRA) is now as late as sixty-seven years old, meaning that you’ll get a penalty for drawing on it before then… even though two-thirds of the population is out of the full-time work force by then.

We settled upon sixty-five, since it is both conveniently between those two ages and the age at which you qualify for Medicare — retiring at 65 would mean that you at least don’t have to shoulder the burden of insurance costs.

The jobs older people work more than others

The jobs in top ten table above may or may not surprise you, except maybe for embalmer. These roles aren’t physically demanding, and in most cases benefit from extensive experience. What’s more, they don’t tend to demand continuing education or staying on top of trends.

Here’s an age distribution of the jobs that have the highest percentages of older workers.. 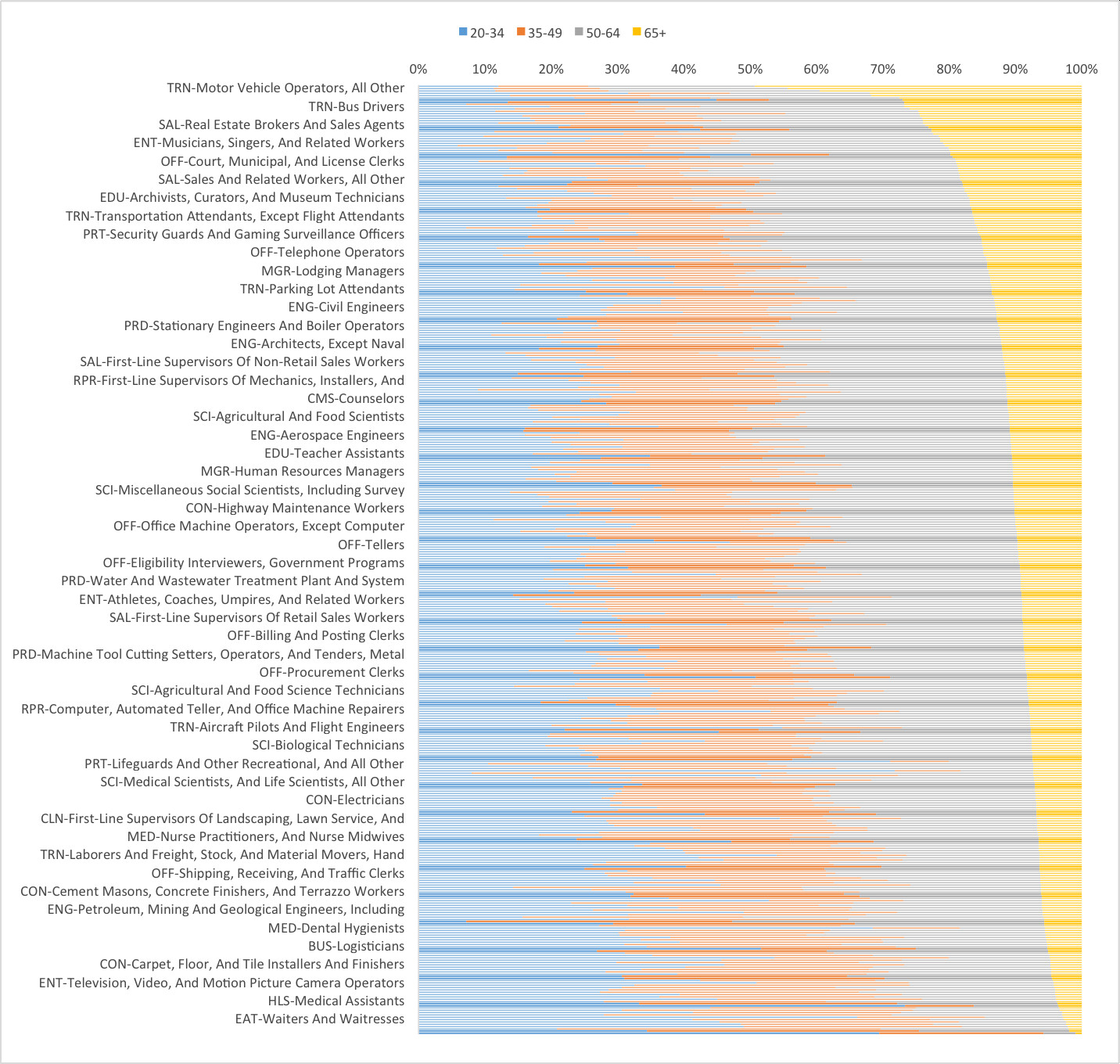 Keep in mind that these are the jobs that have the highest percentages of people over sixty-five working in them — older workers don’t make up a majority of any of these positions, and in only four cases a plurality.

The jobs that have the most elderly workers

When it comes to which jobs older Americans work and who works them, we see trends towards jobs that have less physical demand and demand higher education — CPS data shows that those who work tend to have the highest educations and concentrations of wealth.

And in addition to the jobs that have the highest percentage of elderly workers, we wanted to see which jobs had the largest population of older workers. Using Census data for jobs with at least twenty instances, we’ve got another top ten list for you — hooray!

Jobs with the most elderly workers

And on the flip side, we’ve got the inverse, jobs with the fewest older workers.

Jobs with the fewest elderly workers

In the early 1990s nearly 60 percent of 62-74 year-old men with doctoral and professional degrees were still in labor force. In contrast, only 20 percent of male high school dropouts the same age remained in the workforce. The participation-rate gap was smaller for older women, but it was still sizable.

Many of these professional occupations allow for greater flexibility in hours and gradual reduction of workloads, but the difference in workforce participation may be the toll blue collar professions take on the on workers, forcing them to retire earlier than they may wish. Rand research shows that “negative health shocks” are by far the biggest thing keeping the elderly from the workplace.

The good news for older workers is that they’re typically paid at a higher rate. According to Brookings Institute and CPS research, workers between 60 and 74 are currently paid more in hourly wages than an average worker who is between 25 and 59. And when considering the structured pay increases related to many of the most common jobs amongst the elderly, it makes sense.

But should you be concerned? Well, yes, if you’re not in a high-income job.

With more people living longer, the workers who are forced out of retirement to take unskilled jobs will not benefit from their pre-retirement experience, while workers who remain in the work force are compensated at a higher rate.

This means that for more Americans, particularly younger ones, the only option will be to never fully retire — or to start aggressively saving.