Are Robots Trying to Take Our Jobs? 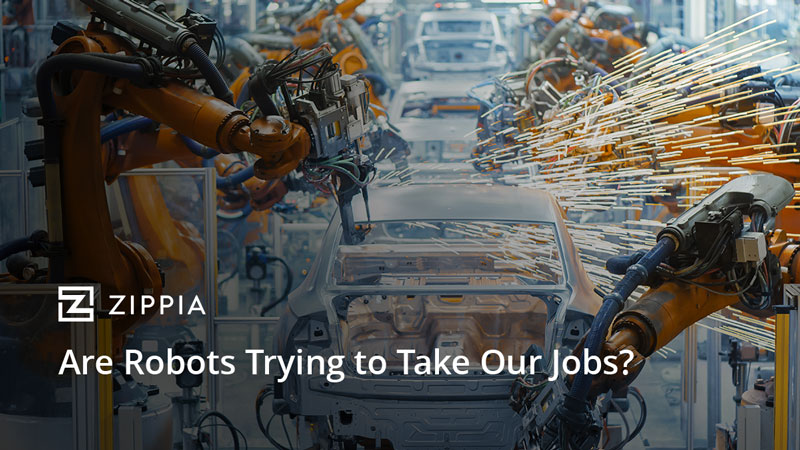 News outlets have covered robots quite a bit recently, namely the “impending” robot takeover of jobs. And I deliberately use quotations with ”impending”, because the focus is on what changes are coming or about to happen.

And folks, I do don’t mean to stir up your fears myself… but that shift is already happening.

The robot revolution is upon us! How much should we fear it? Are we going to be replaced by Terminator-like super-machines? Strap in folks, because what I’m about to share with you will make you think that Elon Musk was right when he said that artificial intelligence is “potentially more dangerous than nukes” and the “biggest existential threat” to humanity.

So to get to the bottom of this trend, we examined current job postings to see just how close we’ve come to the brink of the machine takeover and found that there are already 9,001 job postings that involve robots and/or artificial intelligence

Get a job that keeps you free of the robotic overlords
We analyzed millions of resumes to determine what jobs people with your degree are most likely to land and how they pay — search by geographical area or desired field. Presumably one that won’t get automate next week.

We have nine of the most notable job titles involving robots below, but first…

What does it mean to be robotic?

We didn’t want to just search for “robot” and “droid”, so we had to dig into this question a bit to come up with our search criteria so it wasn’t just a list of robotics engineer postings. The definition goes:

And it’s a bit of contentious issue, but futurists tend to agree that robots are machines that have at least one of these qualities.

So our list contained terms that included robotic lingo: kinematics, A.I., uncanny valley, and more. But robots are more than just man-like machines that blink and go beep-boop, so we also included words that imply the list of robotic characteristics — unmanned, automated, computer-assisted, etc.

The results from our search is for a mention the keywords in either the job title or the job description and produced 985 results — 494 of which had multiple postings for that title.

You’d think that Robotics Engineer would be the job title that popped up most frequently, but that’s exactly what the robots want you to think.

The medical field has, far and away, the highest demand for robot-friendly users with 8 of the top 10 robotics-requisite job titles. What’s more, of all of the 492 titles that had multiple postings, 68 were health-related. Most of these were surgeons of some fashion using the da Vinci.

Most notable job titles that robots have infiltrated

Stephen Hawking has argued that “the development of full artificial intelligence could spell the end of the human race” — and while they haven’t gotten that far, they sure seem to be trying.

And if it doesn’t make you uneasy that robots have insidiously infiltrated the jobs that our very lives depend upon, then I’m not sure what will. Below, we list nine of the most notable job titles that require interaction with robots and automation.

Rank: #1
Results: 2,711
The Decal Applier job title had almost four times as many results as any other job — largely for the inclusion of automatic in our search terms. It is a broad job category that includes affixing labels and graphic to almost anything, from bikes and cars to bottles and airplanes. It doesn’t involve many anthropomorphic machines that talk to you, but it’s an excellent example of how automated processes streamline job functions.

That’s right, they want to lure us into complacency by “making work easier” and “being helpful”.

Rank: #2
Results: 789
The second highest job that involves robots in our results is another seemingly unlikely one — but the introduction of ARTAS revolutionized the hair transplant procedure and is a critical skill for Dermatologists in many practices.

Their attempts to get closer to my cranium, dear reader, will fail.

Rank: #8
Results: 203
This surprising job is in high demand because people just don’t always love their machines, and Applied Anthropologists, traitors to humankind that they are, are responsible for helping tech companies figure out the attributes that people love — or wish they could have — in their computers, phones and so on and helping them overcome the uncanny valley.

Rank: #10
Results: 164
The medical profession seems to demand robotic familiarity more than any other field — and you’ll appreciate the addition. For Urologists, the da Vinci System helps surgeons provide better clinical outcomes than conventional technologies allow — for example, better cancer control and a lower incidence of impotence and incontinence in operations in your nether regions.

One of our greatest edges on the droids is that we can reproduce at will and they rely upon us for their parts of production, and now we make them integral to our very parts of our production.

Rank: #15
Results: 108
Computer-aided Drafters and designers more or less use software to take simple ideas and drawings from inception to the workable models that can be manufactured and produced — fields from from interior design to weapons systems productions use this software.

Rank: #23
Results: 84
While we’re not quite to the stage where we having red-eyed Terminator robots running around battlefields, military technology relies heavily upon automated systems that move to follow the commands of operators. Tank Drivers employ robotic tank firing systems that allow military personnel to essentially point and shoot — the automated system adjusts moves to adjust its aim and direction, taking into consideration measurements that humans wouldn’t be able to.

And then there’s RoBattle, the tank pictured above that is actually a full-on robot with with A.I. vehicle control, navigation, RT mapping and autonomy, sensors and mission payloads. So that’s, um, scary as hell.

Rank: #62
Results: 12
So, this other military job kind of sneaks its way into the search results because of the word “automatic” — for most job postings it is synonymous with “automated”, but in this case it’s referring to automatic weapons that Indirect Fire Infantrymen need to be comfortable with.

But then again, we have MAARS (Modular Advanced Armed Robotic System), which can be programmed to differentiate between fire and no-fire zones, to open doors, and even to drag out injured bodies — unmanned aerial vehicles (UAVs) already play a crucial role in today’s combat zones, and the exoskeletons and robotic soldiers of the future might be moving a bit more towards the robot takeover we said you didn’t need to worry about earlier…

Rank: #72
Results: 11
The title Robotic Welder pretty much describes what it does: welds robotically. Technicians serve in the gateways positions that robotics futurists see developing more: working alongside robots, not just being replaced by them, as they program them, design fixtures, define operation parameters, and do spot-welding while listening for robotic malfunctions. There are even manufacturing robots designed with artificial intelligence that respond to and interact with nearby workers.

Rank: #81
Results: 10
And finally on our list is the Robotics Engineer — the guys who make all of these other jobs (and the inevitable rise of the machines) possible. We feature robotics engineers to highlight that this job title is only ranked 81 on the list, showing just how many jobs out there rely upon or include robotics, beyond the field of robotics itself.

All kidding aside, do we really have anything to fear?

In all honesty, the general consensus amongst experts is that we really don’t have much to fear, and that that fear is largely rooted in uncertainty. We’re in the same position are our predecessors who feared the steam engine, the factory, and the computer.

In fact, futurists suggest that the greatest pairing possible — as is the case with many of these jobs — is a combination of man and machine, such as the team of chess masters who defeated a team of robots with the aid of a single computer.

Indeed, the robotic revolution is a promising one, where automated technology permeates the job market and changes how we function as a workforce — and if you ask robotics experts, they’ll tell you that it really did already begin… in the 1960’s.

You’re not going to walk into work one day to find that you’ve been replaced by a Roomba, unless your job is to inefficiently sweep dust in a small room. But then again, you probably need to reexamine your prospects anyway, and we can help you.

But if you suffer from robophobia like Musk and Hawking, then you’re out of luck.