The Best (and Worst) Cities and States for Internships 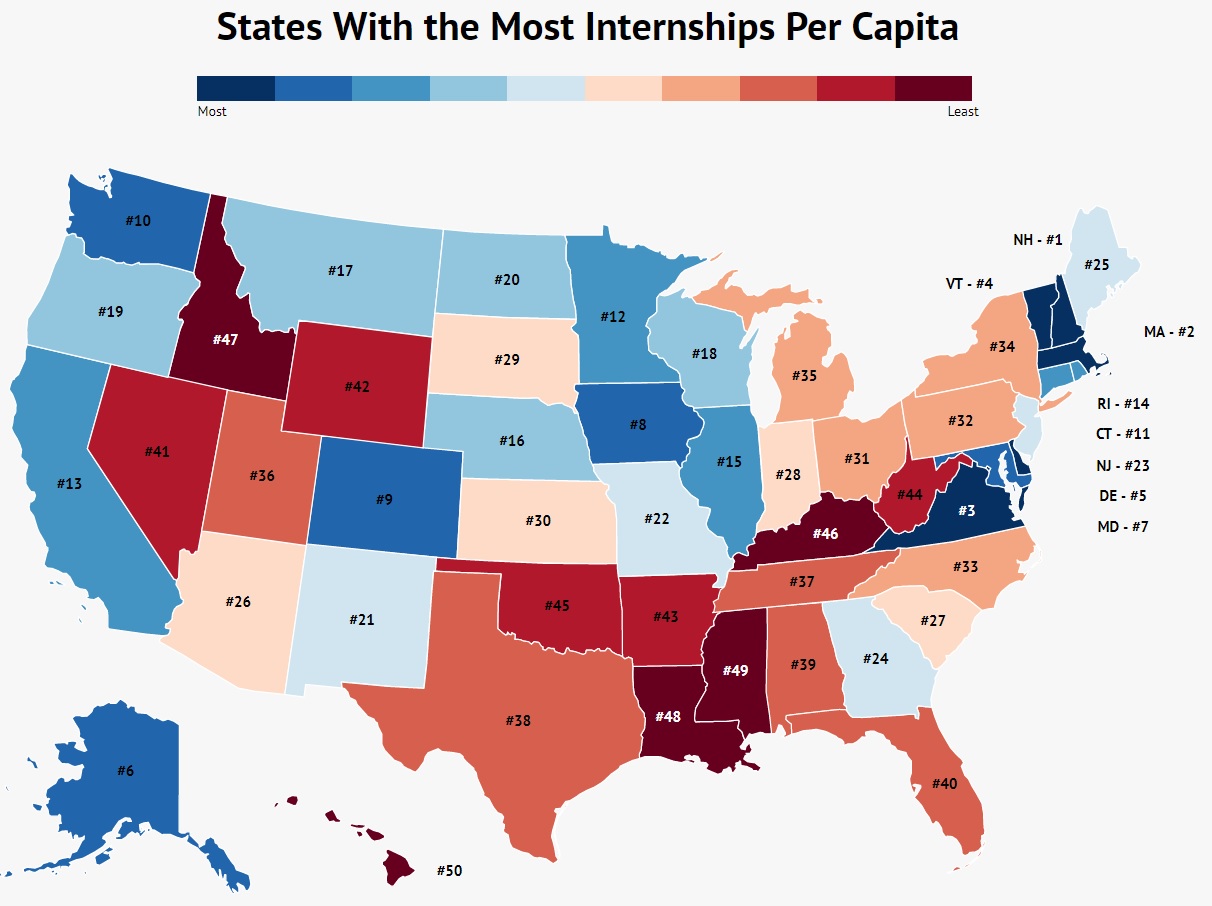 When students start looking for jobs and others new to the job market begin their searches, the phrase, “This position requires at least one year of work-related experience” can signal the end to a promising job listing.

For those who are just getting started in an industry, finding even an entry-level positions that doesn’t demand a bit of work experience is a struggle. To aid people on the work experience journey, we broke down the geographical internship markets.

How tough will it be to find one where you study or live? Is moving for an internship a viable option? All of that will be easier to determine after you look at the data.

A summary of our internship findings:

This was a pretty straightforward study. We used the latest Census and American Community Survey data to acquire the populations for each of the cities and states. All internships were included in the states ranking, but we eliminated from the study any city with less than 10,000 people.

We went to our proprietary data to gauge the level of internships in each city and state, based off of our database of almost 8 million jobs.

The Northeast is your best bet for finding internships — the South, not so much

New Hampshire takes the top spot with its 3,581 internships — an impressive number for a state with such a small population.

But perhaps more impressive is Massachusetts in at second place, with 17,518 total internships. It maintains the second-most internships per capita, even though it also has the fifteenth highest population in the country — this is likely because of Boston’s Kendall Square, one of the largest startup areas in the country.

Judging from the map, it looks like maybe latitude is correlated to internships, since the South is also pretty terrible for internships and the North is solid.

I mean, that’s not it at all; it’s hard to tell why Hawaii is so bad for internships, but it’s likely related to its lack of startups — only three Hawaiian startups received venture capital funding in 2017.

You’ll have luck with internships near the nation’s capitol

And if you’re looking to move first and find an internship later, here are the best and worst cities for finding internships.

The first thing you’ll notice about the top list here is that the majority are in Virginia — but in reality, DC can practically claim the #1 title, as most of these VA and MD cities cluster in the Washington metropolitan area.

All of that said, it’s still worth mentioning that Fort Meade manages to top the list, despite barely beating our 10,000 population cutoff.

The DC internship market benefits from a large concentration of pretty much all of the organizations that generate internships: government, startup, media, and non-profit organizations abound.

We’ve got no idea why these places don’t have many internships, nor why the worst ones are in Nevada.

We would expect the number one worst city for internships, Paradise with 227,000 people, to have more than one internship, but at least there’s symmetry there.

A final note on where to find internships (or externships)

Although the pay might not be great (or may even be non-existent), many employers use internships as a trial period for an employee before offering them a real job. Some top level employers expect you to have more than one, or at least one plus an externship.

If you’re having trouble finding an entry-level position somewhere, it might be worth it to try for an internship first even if you’re not still in school — and if you’re struggling to find an internship, maybe try searching for one in an area on our list.

The Best States to Find Internships