These Are the Fastest Shrinking Jobs

by David Luther
Jobs - 3 years ago

Every two years, the Bureau of Labor Statistics (BLS) publishes its Employment Projections program information on the American labor market, based on ten-year projections.

This study predicts changes in the labor force, industry employment, macroeconomy and occupational employment over the next ten years — and importantly to a career insights company, it also sheds light on which occupations are going to shrink the most.

So, we dug into this massive sheet of current and developing trends. Which occupations are going to lose the most jobs? Which field will shed the greatest percentage of its workforce? Which industries are people leaving for greener pastures?

Metaphorically of course, because agriculture jobs are dropping faster than flies on cow patties. But more on that later.

For this analysis, we looked at the BLS’s most recent EP report, looking at data projections for 2016-2026.

The projections are not prediction, but instead a description of what would be expected to happen under certain assumptions and circumstances. The BLS projections assume that, for the most part, labor supply meets labor demand, with the assumption of full employment for the economy. 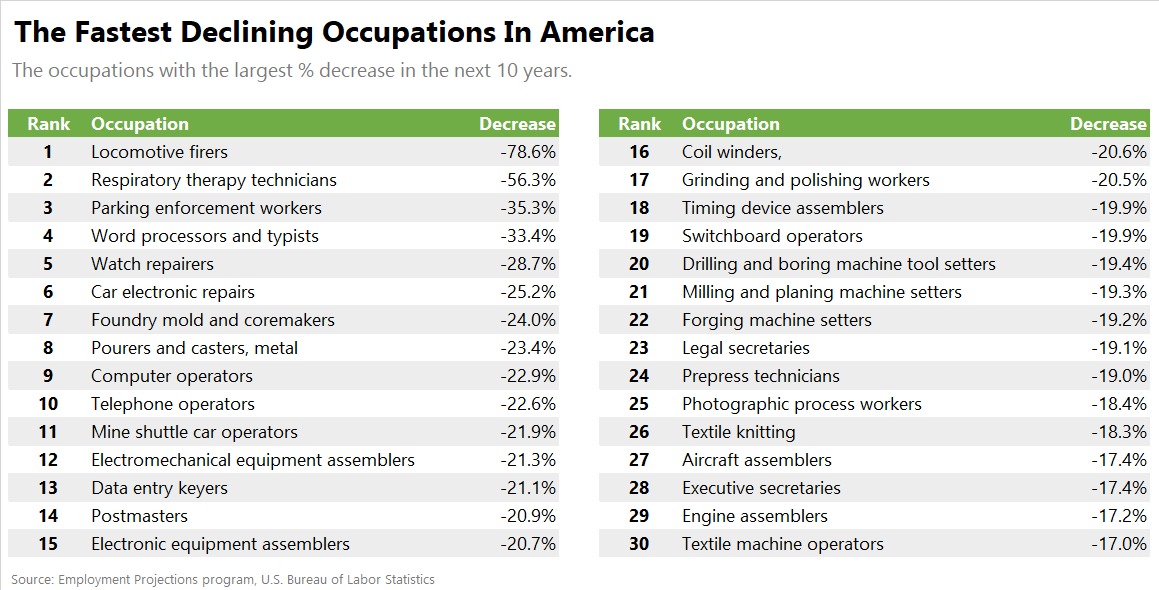 The BLS reports that 163 of the 817 detailed occupations they report on are projected to decline over the next ten years. But for the ones who hold the dubious honor of top ten on this list, it’s more of a plummet.

This table shows the jobs that are seeing the greatest decrease by percentage of jobs — so even though watch repairers are fifth on this list, that’s a large percentage of a relatively small occupational space. 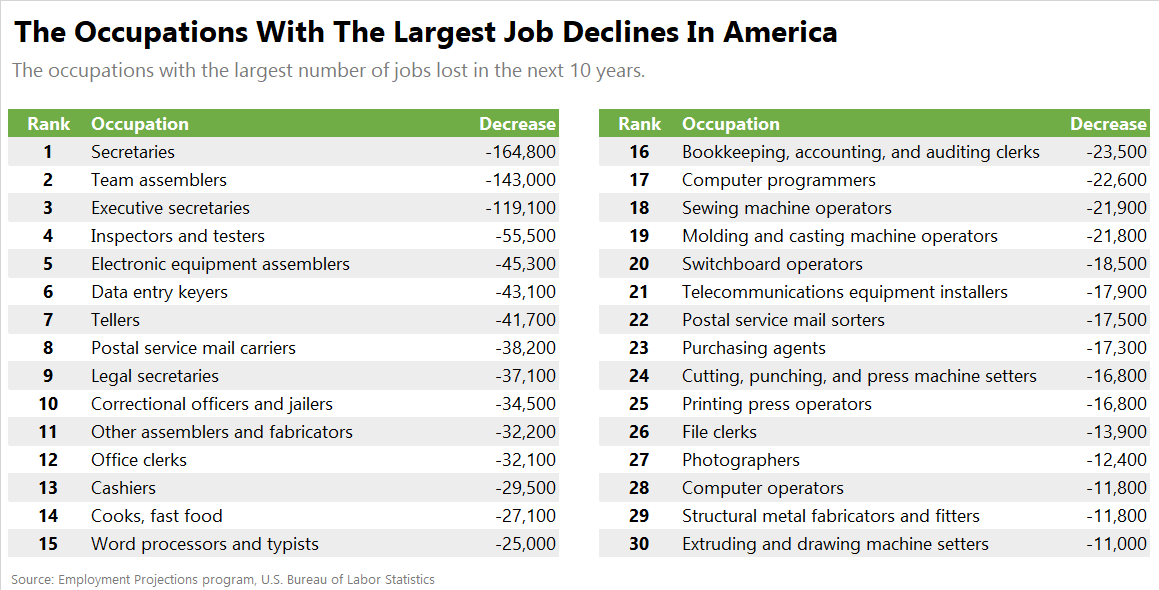 With that in mind, compare it to data entry keyers — appearing on both lists — an occupation facing a loss of 21.1 percent of its jobs, amounting to a whopping 43,100 jobs lost.

Automation in some form is responsible for many of the jobs appearing on both lists — and many are related to manufacturing in some capacity, serving to drive home the point that trying to revitalize a manufacturing workforce is unlikely, or in the words of the BLS:

All occupational groups are expected to add jobs over the projections decade except for the production occupations group, which is projected to decline by 4.1 percent 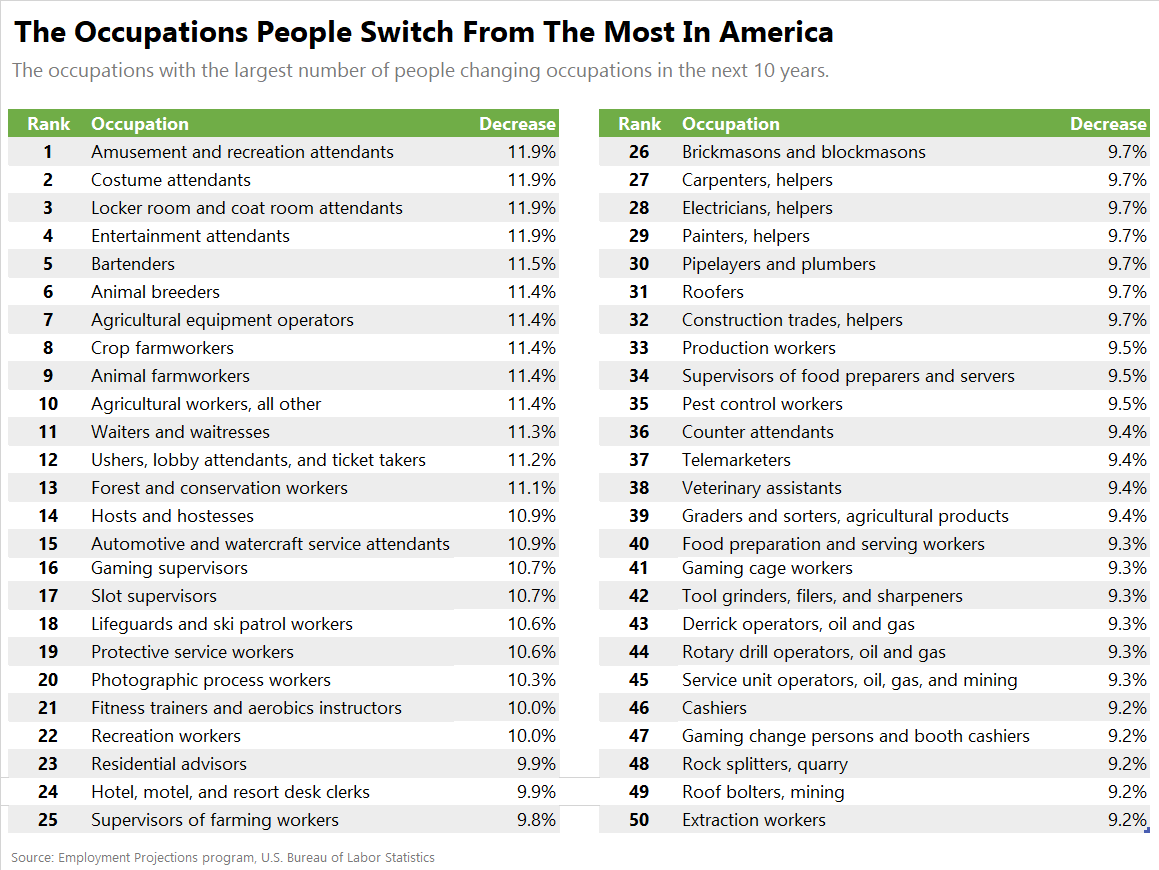 Here we have the jobs that people are leaving for other occupations at the highest rate (from that greener pastures joke).

We can’t ascertain the reason from the data, but many of these positions smack of settling and seasonality. That is, they’re jobs you get to hold you over until something better comes along (waiting tables), or they’re temporary (seasonal farming).

Keep in mind, though, that while this is write-up has been negative the future if actually kind of bright, according the the EP report. Total employment is projected to grow by 11.5 million jobs over the next ten years, reaching 167.6 million jobs in 2026 — at a higher rate than 2006-2016.

The report also predicts that labor productivity will increase, and at a faster rate than the previous decade, all leading to faster GDP growth. And while the goods-producing sector is expected to increase by 219,000 jobs, the service-providing sector should at 10.5 million.

Almost none of the fastest declining occupations require some level of postsecondary education for entry — of the 30 fastest growing detailed occupations, 19 typically do.