How Does Netflix Make Money?

In This Article
Skip to section
Show More

It’s 2020. If you’re seriously asking this question it’s obvious you live under a rock. Netflix is a streaming service that produces original content like Stranger Things and House of Cards, as well as partners with film and TV studios to stream certain well-known TV shows like The Office. The streaming service started out as a DVD rental company, and while it still dabbles in renting out DVDs, the real money comes from the “Netflix and Chill.”

How Does Netflix Make Money?

While the “real” money comes from the streaming service that Netflix provides, the company has actually been in debt for several years. And that’s in spite of being valued at over $100 billion. The majority of that debt stems from how much the company spends making original content. But we’ll get back to that in a minute.

Even with the large debt hanging over its head, the company is still one of the largest streaming services. Netflix got a big head start over its competitors right off the bat and has been able to set the standards of online TV streaming. Among Netflix’s competitors are Amazon Prime, Hulu, Disney and soon-to-be HBOMax.

Now, you have the option to add DVDs to your subscription for additional costs. Before you even ask, yes people are still using this rental service. While its not the biggest revenue stream, it still brings in an additional $30 million a month. With the streaming subscriptions alone, the company is raking in $950 million a month. Which means Netflix makes around $11 billion per year. Now let’s discuss how the company could even possibly be in debt.

Told you we’d come back to this. Last year alone the company spent $15 billion just on original content. Before that, it was $12 billion, even though it was projected to only spend between $6-8 billion. The episodes from Stranger Things Season 2 all cost between $6-8 million each. No wonder the company is in debt. While it doesn’t seem possible, Netflix does have a business model that it sticks to. And despite the crippling debt, experts do believe the company will end up positive.

Despite what you might think, many experts claim that the company has not struck an iceberg. In fact, many believe that the company’s cash burn rate will ease up this year. After the free cash flow hit a negative $3.5 billion last year, there were several critics who believed the model wasn’t sustainable. A large part of that came from the streaming service’s competitors amping up their game.

Disney and Apple both launched in November of last year. Particularly bad for Netflix, Disney pulled some content from the Netflix to add to its own service. Additionally, Disney+ is cheaper than Netflix and includes lots of Pixar, Marvel, Star Wars and Disney Classics content that was never on Netflix. While early research has shown that Disney+ is not a deathly threat to Netflix, only time will tell its lasting effects on the company. 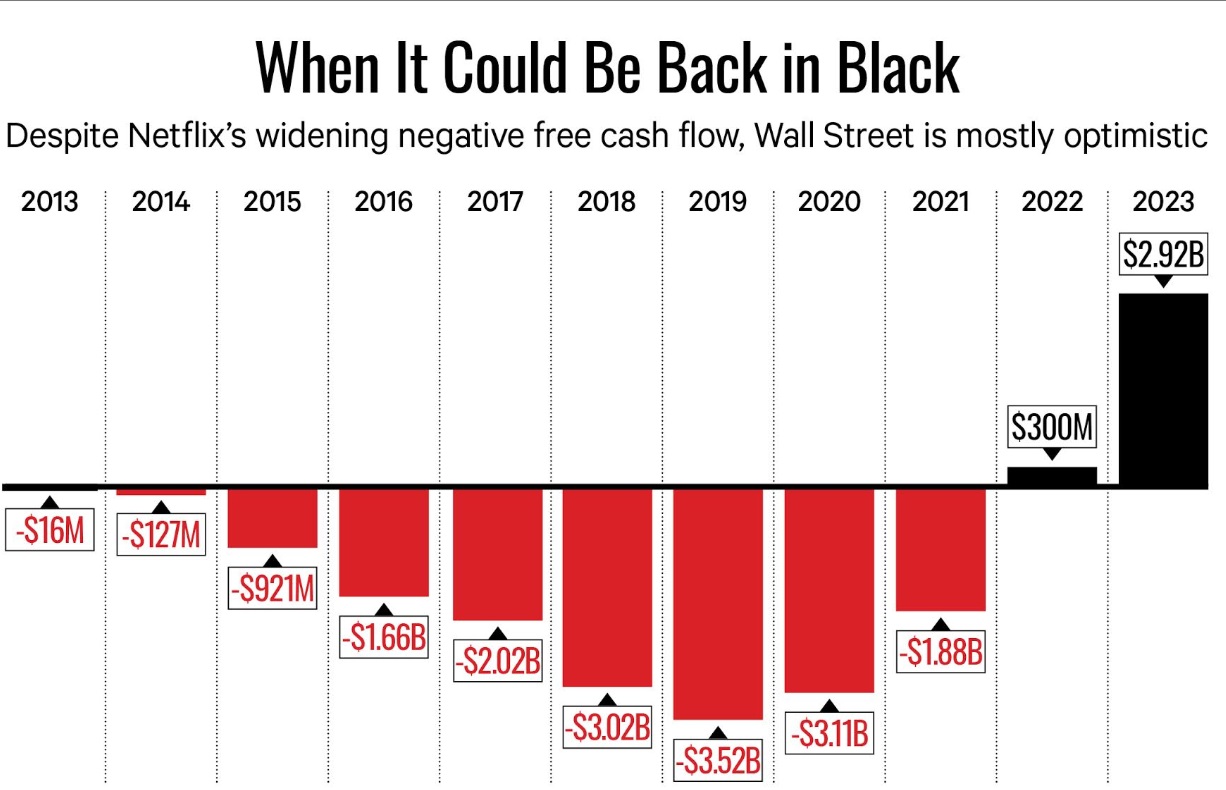 Another particular tough time for Netflix came with HBO announcing its own streaming service, which is set to launch around May of this year. With the addition of HBOMax, the company pulled one of Netflix’s most-watched TV shows, Friends, at the beginning of the year. The other most-watched TV show on Netflix will be pulled in 2021 with the launch of Comcast’s Peacock.

In order to keep up with all of these hits, Netflix has to keep burning through its cash fund to produce better original content. To date, the company is over $12 billion in debt with around $600 million adding up in interest annually. You thought your credit card bill was bad.

Despite taking hit after hit, the company still believes in itself. The company has said that its revenue base is expanding every day, as well as its increasing operating margin. That’s why it believes the cash burn rate will ease up this year. People who have invested in the company are certainly hopeful that the free cash flow guidance will narrow considerably. This will restore faith in the company’s financial management.

Articles In Guide
Never miss an opportunity that’s right for you.