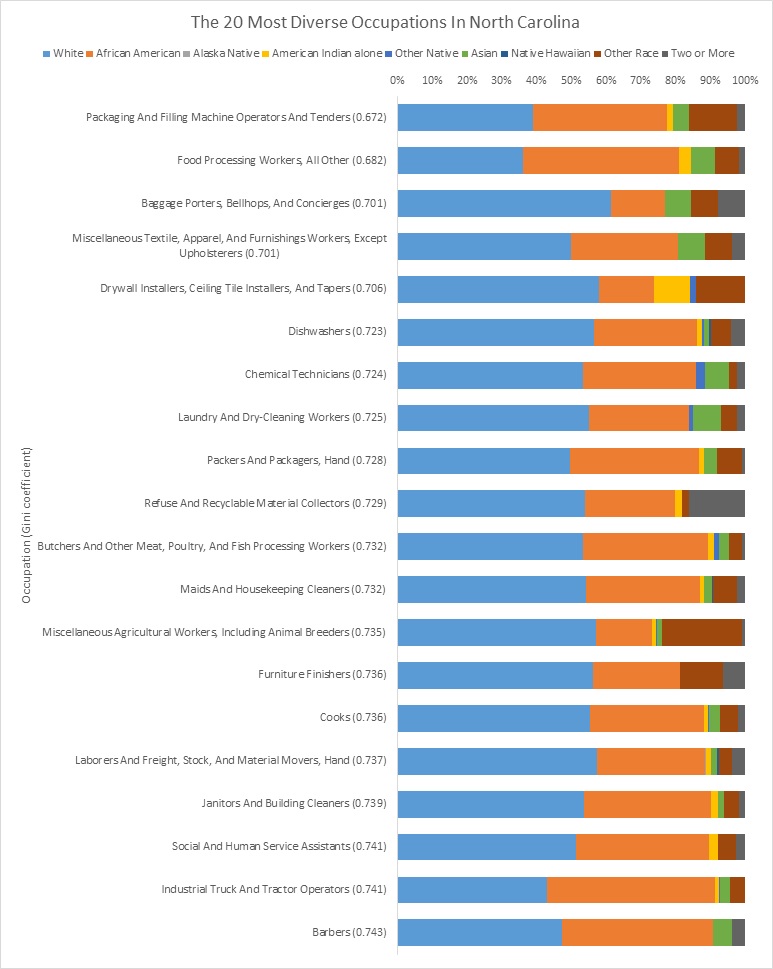 As we’ve seen time and time again in America, we’re not quite where we’d like to be and certainly where we ought to be when it comes to race. I mean, it’s 2016. Let’s get it together.

Of course, there are certain parts of the country that are more diverse and inclusive than others (Hawaii, California, and Nevada, for example); there are some that are not diverse at all (think West Virginia), and then there are states like North Carolina that are right in the middle.

But we wondered, is there a difference within different jobs within these different parts of the country?

As it turns out, yes there is.

So today we’re going to look at both the 20 most and the 20 least diverse jobs in North Carolina. First, though, you might want to know how we came up with this list in the first place.

For this analysis, we wanted to focus only on racial diversity across different job titles—we aren’t going to tackle gender or income diversity (in this post anyway.)

PUMS data is great—it’s a sample of the actual responses people gave to comprise the larger American Community Survey data that’s more ubiquitous. Because PUMS data is taken on an individual basis, it lets us get much more granular with our analysis.

In this case, we wanted to look at

and see how they are related:

We then limited the analysis to only occupations with greater than 10 people in the dataset. Again, it’s a sample of the whole American Community Survey dataset. That left us with 393 occupation codes with enough data.

So now that you know the how, let’s get to the what.

The 20 Most Diverse Jobs in North Carolina

In many of these jobs, “white” is still the majority—but not so with packaging and filling machine operators and techs or food processing workers. African Americans played a much larger role in these jobs (particularly in the latter), as did “Other race” and those who identified as Asian.

The job where American Indian-identifiers ranked highest was in Drywall Installers, etc. Asians worked the most in laundry and dry-cleaning services. Native Americans in food processing. Those who identified with two or more races most commonly worked in Refuse and Recyclable Materials jobs. And those who put themselves in the “other native” category worked most commonly as Chemical Technicians.

You know what’s coming next: the 20 least diverse jobs in the state. 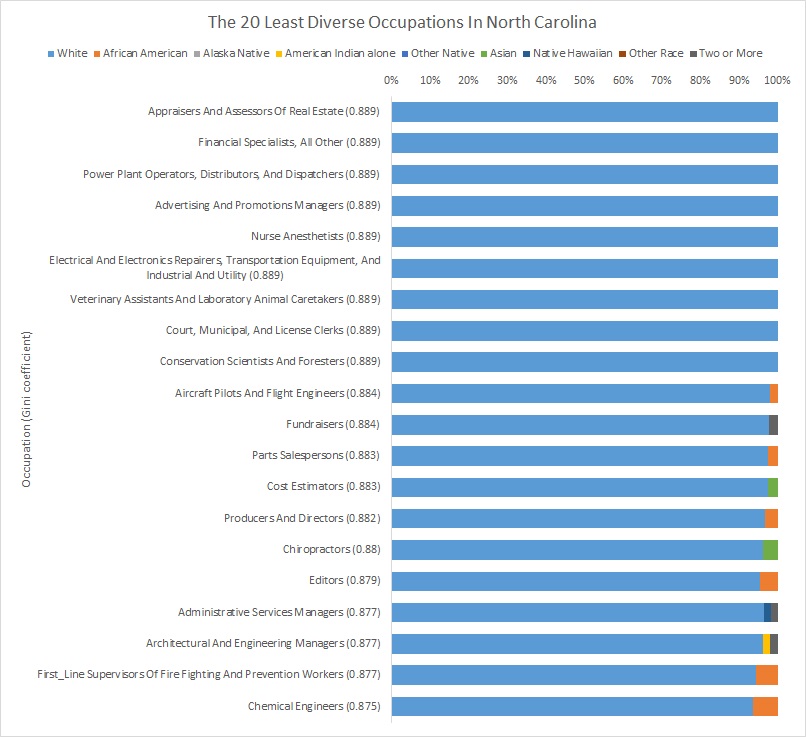 Numbers 1-9 on this list had absolutely 0 diversity as far as race goes: these were jobs solely filled with people who identified as white. There was a higher percentage of Asians in both the Cost Estimator and Chiropractor fields. And in fact, African Americans made up nearly half of the “Editor” positions and most of the “First Line Supervisors” and “Chemical Engineer” positions as well.

But the fact is, these 20 jobs are simply not diverse, because even if a majority of workers are not white, that doesn’t mean that there are any more than two races reporting working these jobs.
And here’s the worst part: Still today there is a very heavy correlation between race and pay. In those jobs with less diversity, the pay is higher. In the jobs with more, the pay is lower.

A Long Way to Go

So, yes, we still have a long way to go, but we’re hoping that at least with this data we truly know the reality of the situation; and from here, can take the steps we need to make jobs in America, specifically North Carolina, as diverse as they should be.