Jobs Where You’re Most Likely To Be Murdered

No job is perfect.

However, some jobs are real killers. Now we’re not talking about sedentary, desk jobs that will increase your risk of heart disease, or the difficult to judge cost of life from an intensely stressful job.

No, we’re literally talking about jobs where you’re more likely to be murdered.

We analyzed BLS data to find the jobs where workers are most likely to meet a sinister end– and who is carrying out these crimes.

The above jobs have the highest volume of murders. So the next time you get mad at your fast food place of choice for forgetting your extra pickles, maybe have some empathy. Not only is there job stressful, it also can be dangerous.

Who is most likely to kill you at work? 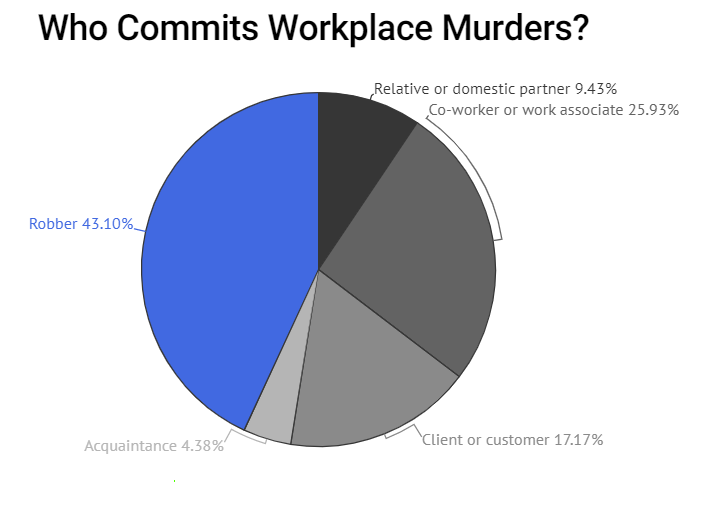 The most common assailant of workplace homicide is robbers.

Looking at the high number of cash-handling positions above, it certainly explains why some of these jobs have a higher number of murder than others.

Another 17% are victim to an aggravated customer.

Yet, perhaps more concerningly, are the fairly high percentage of workplace murders committed by a coworker or work associate. 1-in-4 seems a bit high. But murder also seems many steps too far for whatever workplace grievance may be occurring.

When to watch out

Everyone hates Mondays, but they aren’t particularly murder-y.

In fact, Thursday and Saturday are the two days with the highest percent of workplace murder.

Since just under half of workplace murders involve robbery, it is no surprise to Saturday so high on the list. Saturdays have high foot traffic at stores and restaurants, meaning more cash in the register to tempt those with malicious intent.

When it comes to speculation for why Thursday has a higher percentage of murderers, my mind comes up blank.

Some Months Are Deadlier Than Others 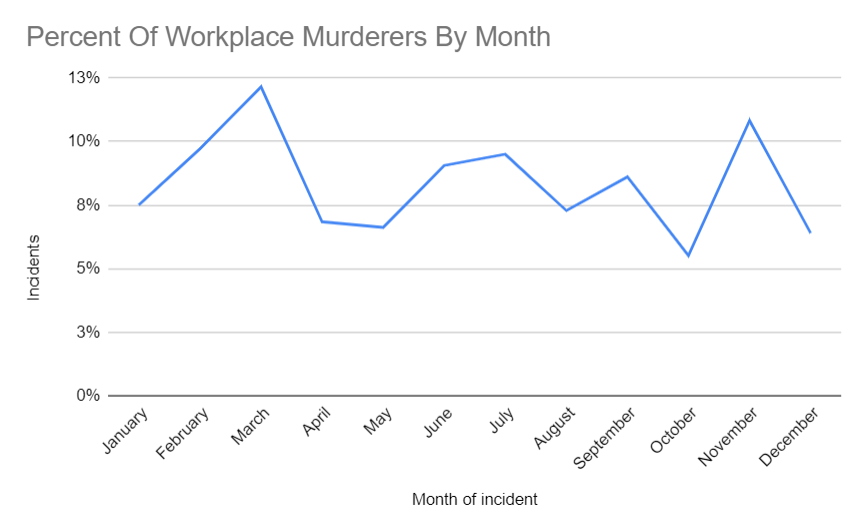 This one was pretty simple. We used the BLS’ report on Workplace homicides by selected characteristics for 2011-2018.

Most of the data was fairly neatly presented. However to find the 10 jobs with the most murders, we first sorted by number of murders in 2018 (the most recent year). We then removed industries (bolded in the report) to find the closest possible descriptor.

We then grouped highly similar jobs together such as “Police officers” and “Police and sheriff’s patrol officers. This was done for clarity and to avoid duplications. For further clarity, we edited some titles for readability purposes.

You Probably Won’t Be Murdered At Work

While workplace homicides are tragic, they aren’t statistically common. Sure, some jobs have a higher risk- but at the end of the day most workers in any career face overwhelmingly, likely odds they’ll end the shift not murdered. The American workforce has over 150 million workers and only 453 were victims of workplace homicide in 2018.

In fact, workers face far more risk of dying from a workplace accident or just being plain old injured than murdered.

So, sure, you can avoid the 10 most deadly jobs. However, it’d probably be more proactive to lift from the knees and follow all safety protocols.