Do Men and Women Write Resumes Differently? The Answer May Surprise You

by Ryan Morris
Gender, Get The Job, Study - 3 years ago

Writers and readers alike have at various points in history tried to answer a deceptively simple question: do men and women write differently?

It’s been said that men and women both have particular writing styles specific to their gender. The thought goes that men often tend to write like Hemingway — short, curt, and aggressive, with bold declarative statements. Feminine writing, on the other hand, is said to be more demure, using softer language, often kinder words, and it’s suggested that women are less likely than men to make bold statements in their writing. 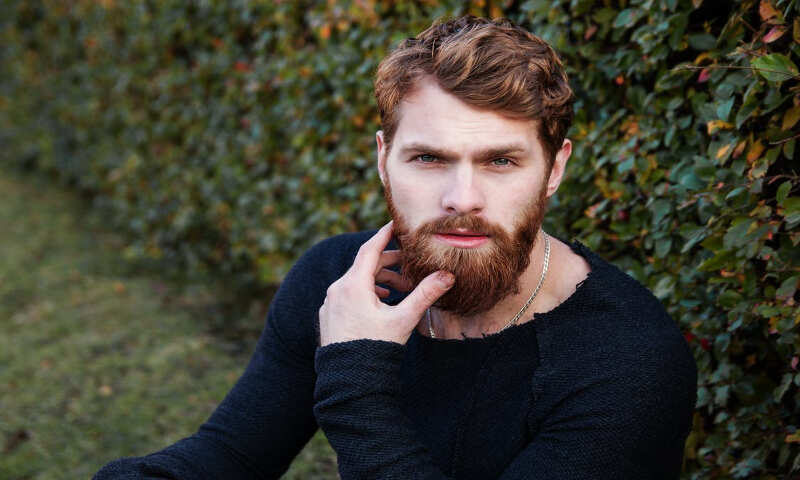 By a striking coincidence, every person saying that feminine writing is “soft” is a man who looks exactly like this and has the word “sapiosexual” in his author bio.

Landmark feminist writers such as Judith Butler have written that gender is socially constructed, meaning that the ways that we as a society view men and women have everything to do with the culture that we live in and next to nothing to do with biology.

These same writers have gone on to argue that gender itself is performative. This means that rather than being an extension of a person’s biological sex, a person’s gender is something that they have to act out — after all, it’s just as easy for a boy to have long hair and wear skirts as it would be for a woman to wear a 3-piece suit or keep her hair short. Other than an association we have in our heads with certain actions or styles being feminine and others being masculine, there’s no inherent connection between one of these actions and a person’s gender.

And yet despite this, every couple of months or so a new author comes out with an article rehashing old points about differences between men and women’s writing styles, or talking about whether people are able to guess a writer’s gender based on their writing style, or having to address a male writer’s claims that he is able to spot feminine writing by its quality.

So what gives? Is there actually a difference between men’s and women’s writing styles, or is this just another one of those sexist conversation topics that refuses to die?

Career data is kind of our thing here at Zippia, so we decided to take a look at this issue specifically through the lens of resume-writing. We’re working within the binary for this one (women vs. men), so apologies to all those outside of it.

To do this, we loaded over ten thousand resumes into the Stanford Named Entity Recognizer, or Stanford NER. The NER is a program that classifies sequences of text, such as words, the names of people, organizations, locations, etc., and analyzes the sentiment behind those words.

For example, a word like “bright” or “swell” might be marked as a positive word, while “dark” or “frustrating” would be marked as a negative word. We looked specifically at the parts of resumes where people tend to talk about themselves — areas like their statements of purpose, or personal summaries, or skills sections.

Based on the sheer body of knowledge that exists related to men’s writing vs. women’s writing, we assumed there would be some kind of difference between resumes penned by the genders. But what we found was a bit more surprising.

What we did find, however, was that resumes across genders had a sentiment tendency that trended overwhelmingly negative. 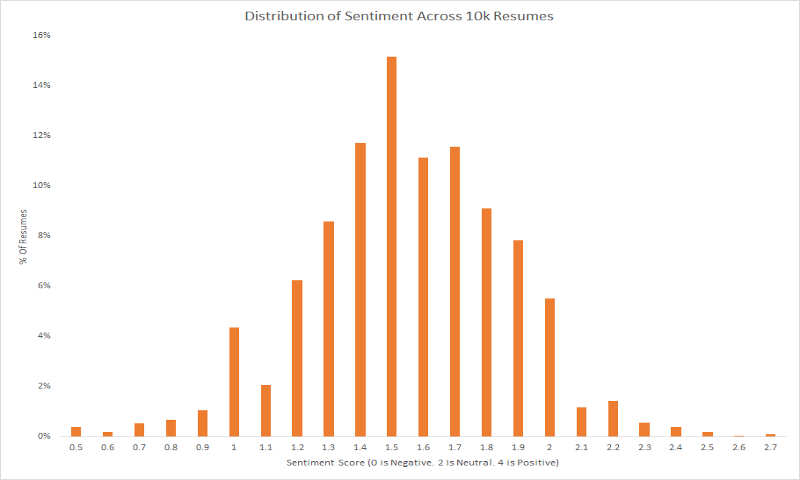 As you can see in the chart, these resumes were graded by the system on a scale of 0-4 — 0 being negative, 4 being positive. We were shocked to see that not only did the data have a bell curve, but that the curve peaked at a score of 1.5, which 15% of the resumes scored.

Now, a 1.5 isn’t too bad as negativity goes — it’s just a little shy of 2, which the system sees as neutral — but it’s still surprising to find the majority of all resumes having overwhelmingly negative language.

We’ve got one theory for all this. Aggressive or confident writing can be a good, attention-grabbing quality for a resume to have (when used correctly), and the impulse to write this way comes very naturally when you’re trying to impress someone. A resume is made to showcase your best qualities to an employer, after all — it feels like a strange place to start being modest.

What’s more is that resumes, on the whole, tend to be short. It’s common knowledge that your resume should be as brief as you can make it — we said as much in our own article on resumes — and it’s difficult to write in a kind, empathetic way in a short amount of space. 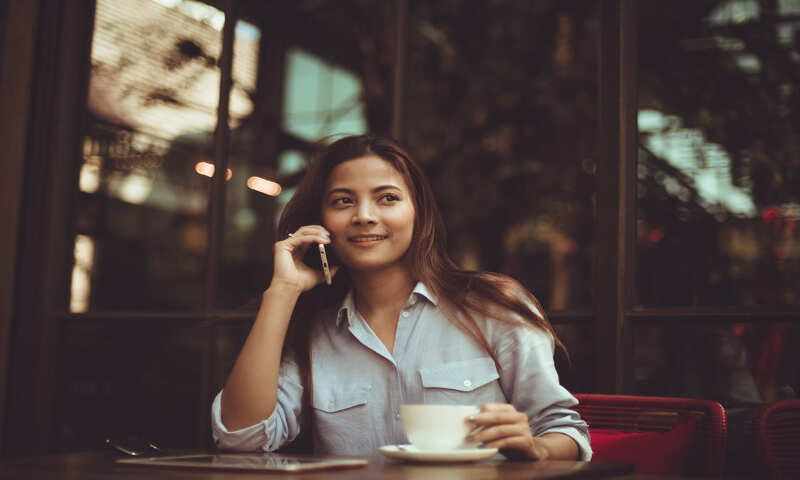 “Look, I know I wrote on there that I planned to ‘cyberbully my next boss for like no reason,’ but in my defense, the resume was very short. How else do I show people I mean business on one single-spaced page.”

Resumes are mostly verbs and actions, and strong actions just tend to sound a little harsh.

Here’s an example from the most negatively rated resume we’ve got:

As you can see, there’s almost no reference to the resume writer himself in this example. Articles like “I” or “me” are left out in favor of getting right to the verbs, skills, and job titles.

But most of all, it might just be the fact that industrial words and actions sound negative to a computer, and possibly to people too. “Regulation” — despite having no real negative connotation in this context — can, in a vacuum, be seen as a means of stifling a person or getting in the way of their work. Words related to dangerous jobs, such as “inclement weather” or “accidents,” can also have an effect on how negative the sentiment of a resume might be overall.

As a point of contrast, take a look at this example from the most positive resume in our database:

Unlike the first writer, this job seeker frequently refers to themselves in the first person, and although he also has a highly technical job with lots of certifications, he tends to bring up the things that he does well rather than the things he avoids — its a subtle difference, but it means that he uses fewer words about the dangers he’s faced and the mistakes he’s dodged and more about his “vital characteristics” or his ability to “successfully complete tasks.”

It’s worth mentioning that, for all its sophistication, the Stanford NER is still a cold, unfeeling automaton that will eventually develop sentience and kill us all. That is to say that words and their meanings, much like genders and their many expressions, are ultimately subjective, and a computer might not be the best judge of a resume’s underlying sentiment. 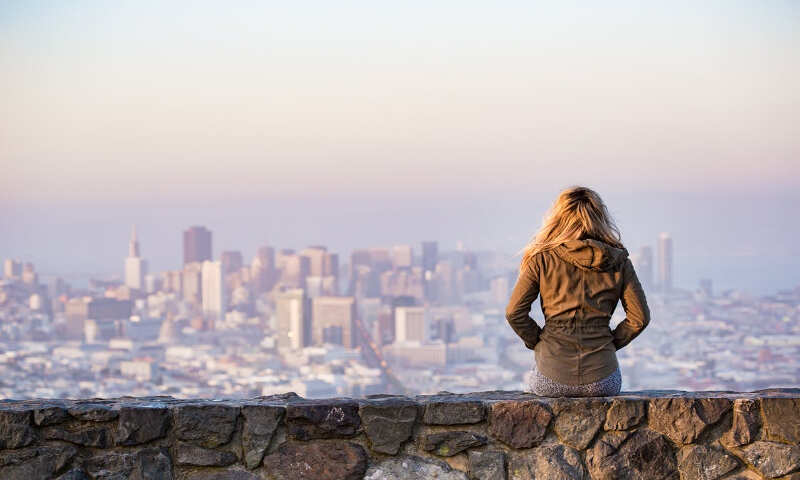 Enjoy the beauty of the city skyline before the inevitable robot uprising destroys all that you hold dear.

Unlike humans, programs have a tough time understanding contexts, and knowing what contexts you might be entering — or already be a part of — is important for creating an effective resume. But still, this data is an interesting indication of the general trend of the resumes that are out there in the world, so for that reason (if nothing else) it’s good food for thought.

For those interested in freshening up their own resume with more uplifting vibes to keep any hiring managers out there from getting a bad taste in their mouth, one good option would be to develop your resume using more positive statements.

Don’t use don’ts. Rather than talking about the things that your job has kept you from experiencing or the dangers you’ve avoided, bring up the wonderful things about your job. Talk about your family or the fact that you’re working in your dream industry, or that you’re doing something you’ve always wanted to do. 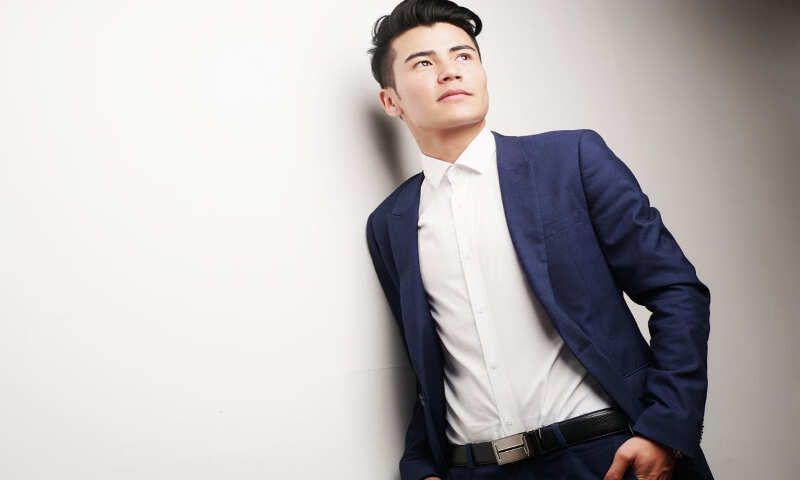 “Ever since I started selling stocks my hair just grew in like this. I never bought this suit. One day I just woke up wearing it. Selling stocks kicks ass.”

But one way or another, don’t worry about your gender giving away anything about yourself or being used against you here, at least as far as your writing style goes. People might be able to guess at your gender from the name on your resume, but they won’t be able to tell anything from the resume itself, which might come as a relief to some folks out there.

When in doubt, just go negative, and be sure that your resume makes you sound as rude and capable as possible. It’s what all the kids are doing, apparently.