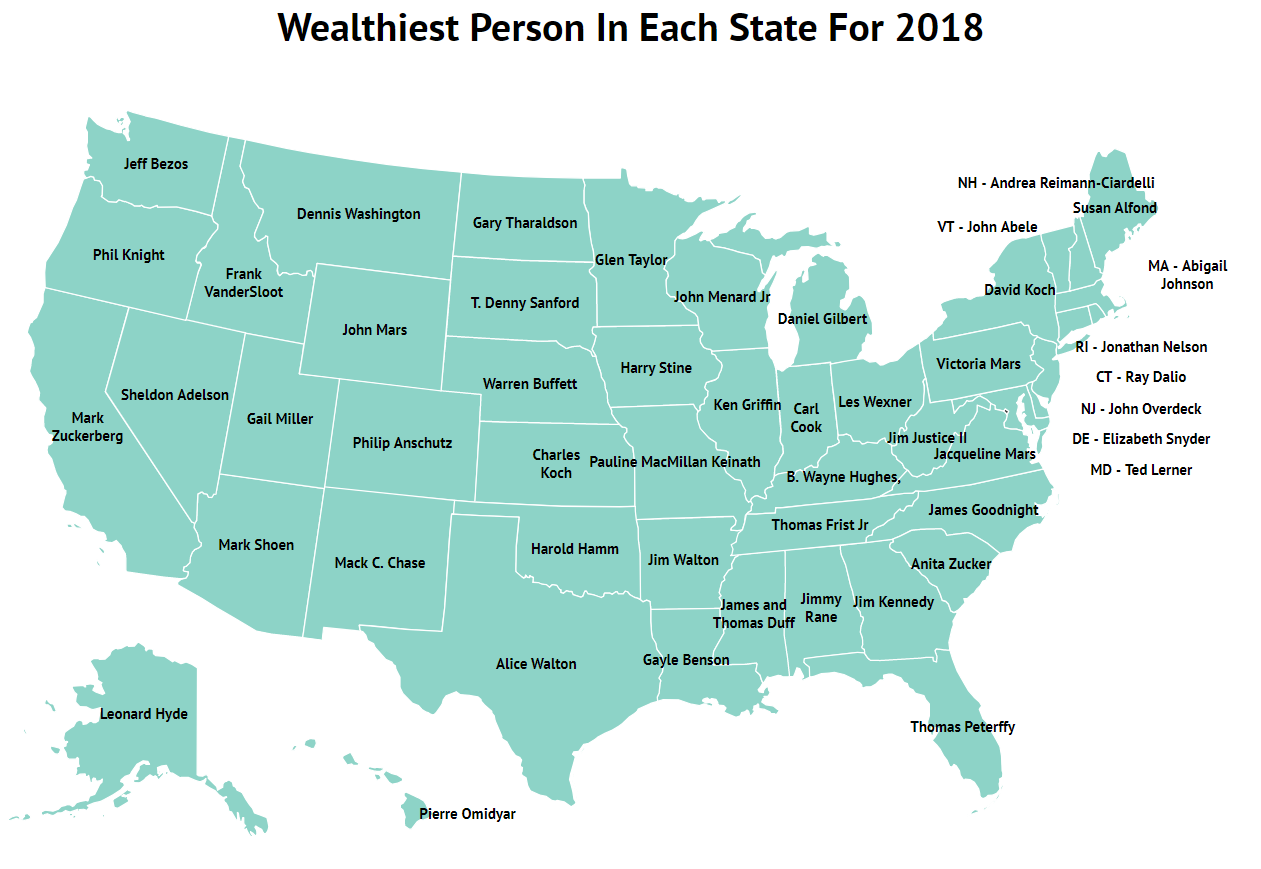 These Are The 10 Wealthiest People In Each State For 2018

by Heidi Cope
Study - 1 year ago

Have you ever wondered how the wealthiest people in America got so rich? Earlier in 2018, Forbes came out with an article on the richest people in every state and Zippia is here to explain the when and how for these American billionaires.

So if you may be America’s next most successful entrepreneur, don’t think that products such as shoes, online shopping platforms, or even pet food aren’t as successful as developing the newest iPhone.

You may just be surprised. Take a look at our top 10 list:

If we want to buy something fast, we order from Amazon and if we want to buy cheap, we go to Walmart. Need to organize an event, publicize anything, or catch up with friends? We all naturally go to Facebook.

But these other billionaires– do we use their products or services and not know it? Everyone knows Nike, but who knew a clothing and shoe line could have boosted the Knight family into the billionaire status?

What about Koch Industries, Berkshire Hathaway, and the lesser-known Adelson and Peterffy? Read on to learn more about all these billionaires.

Determining The Wealthiest Person In Each State

Our expertise is helping people get a job — not figuring out the net worth of celebrities.

So we left the net worth collecting to the experts at Forbes who published their “Meet the Richest Person in Every State in 2018.”

The data for their article was collected from a constant tracking system Forbes created to estimate billionaire worth, nationally and internationally.

Next up on our top ten comes Warren Buffett from Nebraska. You may be thinking, Nebraska? How can the next on our list come from a flyover state? Two words: Berkshire Hathaway.

What exactly is Berkshire Hathaway? Many readers are probably asking the same question. It is an “American multinational conglomerate holding company.” Aka Berkshire Hathaway is a powerhouse that owns a lot or a little bit of a lot of companies.

Companies like GEICO, Fruit of the Loom, Dairy Queen, Pampered Chef are owned by Berkshire Hathaway. They also have a good percentage of shares of companies like Heinz, Apple, American Express, and Wells Fargo.

So if you are a stock-market guru, perhaps taking a look at Warren Buffett’s success would make a good “how to be a billionaire via stocks” textbook.

Naturally, Mark Zuckerberg is going to appear on our lists as the wealthiest person in California. While MySpace was the OG social media outlet, Facebook took social media to a whole new level in the early 2000s.

If you are from the U.S., you may not know what Whatsapp is; however, it is one of the top communications applications internationally, and guess who owns it as well? That’s right, Facebook.

Who knew dropping out of Harvard could lead to such success?

Tied for the fourth and fifth place are actually brothers. David and Charles Koch of Koch Industries each are worth 51.5 billion dollars. And for what?

Koch Industries is the second largest privately-owned company in the U.S. and like Berkshire Hathaway, they own a bit of a lot of things. Koch Industries, however, have a specialty, which is chemical, oil, and agriculture manufacturing.

Koch Industries is most famous for Fred Koch’s, David and Charles’s father, invention of a better oil refining process.

Interestingly, the Koch brothers are very politically involved and use their wealth to help support political platforms/causes. So if you are a congressman/woman looking for some investments for a particular cause, the Koch brothers may be able to help you out.

Who is Sheldon Adelson? This American isn’t a well-known public figure like Zuckerberg but has still been able to accumulate over $42 billion in assets.

Considering he is from Nevada, it may not be a surprise that Adelson’s wealth has come from casinos. If we began thinking about casinos and politics, President Trump may come to mind.

Adelson’s wealth has been used to promote Trump in his election to the presidency in 2016. Trump, another one of America’s richest, probably was able to fund much of his campaign, but Adelson’s $25 million donation sure helped.

Jim Walton is the son of Sam Walton, one of Walmart’s founders. Walmart is the world’s largest retailer and Jim Walton is currently on Walmart’s Board of Directors.

If you have a diverse set of interests, say, banking, media, and retail, why not invest in all? Jim Walton did and look where he ended up.

Alice Walton comes in at number 8 on our list. Alice Walton is the sister of Jim Walton and has also inherited a lot of Walmart’s wealth. Alice and Jim also have major investments in Arvest Bank Group, a large asset outside of Walmart.

Although her assets are worth slightly less than her brother’s, Alice is tied to Françoise Bettencourt Meyers for the wealthiest woman in the world.

Looking for new running shoes and seeing the infamous Nike check mark all over the shoe store? Looks like Nike’s founder, Phil Knight, knew what athletes were looking for in shoes and clothing.

The Oregon-native originally started Blue Ribbon Sports with co-founder Bill Bowerman, a track coach at the University of Oregon.

Nike is one of the most famous brands in the world and everyone can recognize their check, or swoosh, logo. Interestingly, this symbol is supposedly designed after a Greek goddess of victory, Nike.

Last but not least, comes Thomas Peterffy from Florida. Unlike the other people on our top 10 list, Peterffy has a somewhat different, but still extremely successful path to wealth through brokerage.

This Hungarian-American was hungry for success and is the largest shareholder of Interactive Brokers, a brokerage company based in Connecticut.

Peterffy was an immigrant to the U.S. in 1965, learned English, and then worked in engineering and highway architecture before learning about computers and brokerage.

Wrapping Up The Richest People In America

The journey to success in America is never the same. Some people inherit their wealth, while others create their own through shoes or by creating websites for fun.

While some success is due to highly-technical jobs, sometimes success starts with one unique idea and entrepreneurial dedication.

Detailed List Of Wealthiest Person In Each State For 2018