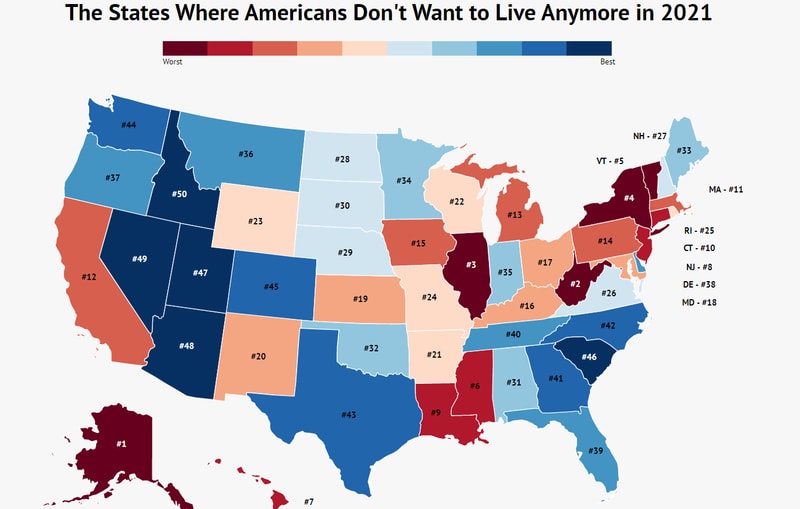 The U.S. population continues to increase year after year. In the past decade, the country saw a 6.3% increase. So why are some states seeing a decrease in their population?

Some of it has to do with the economy of each particular state. When there aren’t job opportunities, people leave.

But another chunk of it is the lack of educational growth opportunities. In general, each state tries to accommodate the majority of the population.

So if your state is filled with older generations and you’re in a younger generation, you’ll probably notice that schooling opportunities are lacking while retirement communities are in full bloom.

We looked into this phenomenon and found out which states people just don’t want to live in anymore (and then discovered the reason why.)

From being too expensive to live there anymore to retirees living out their dream of retiring on a beach, there are lots of different reasons people are leaving these states. Keep reading to find out.

This one was pretty simple. We used population data from the Census’ ACS. We simply calculated the difference between 2019 (the latest year data is available) and 2018.

From there, we used state-to-state migration numbers to find the states that saw the highest influx of residents from the fastest, shrinking states.

Population Change: -0.80%
No. of Residents Who Moved: -5,893
Where They Moved To: California, Florida and Texas

Just from a glance, you might make the assumption that people are leaving Alaska and moving to California because they’re sick of the cold. But really, it has to do with the economy.

People who moved there originally for the oil boom 40 years ago are now moving to live out the beach retirement dream.

And really, the state doesn’t offer much to the younger generation. So when they leave for college, they tend to not come back.

West Virginia lost 13,685 residents between 2018 and 2019. What was once a coal miners’ dream is now a barren land with a coal industry that is dwindling.

As fewer and fewer coal trains go by in West Virginia, young dreamers are moving to Ohio with hopes of striking gold taking with them their future children that would have helped West Virginia’s population crisis.

Unfortunately, that’s the least of the state’s worries. With the continued population decrease, the state is looking at losing a congressional seat for the 2022 election. They need to mine their way out of this hole quickly.

Population Change: -0.54%
No. of Residents Who Moved: -69,259
Where They Moved To: Indiana, Florida and California

With the Illinois population falling 0.54%, you might be quick to assume that the state is expensive when it comes to housing. But the majority of residents left for better job opportunities.

Out of the 69,259 residents who left, the majority escaped to Indiana. Chicago residents who want to enjoy the city life without all of the high taxes and housing that’s more bang for their buck find all that just over the state border.

In fact, those who move just over the border still enjoy the same time zone, TV stations, sports teams and even similar commute times.

Population Change: -0.45%
No. of Residents Who Moved: -88,648
Where They Moved To: New Jersey, Florida and Pennsylvania

Frank Sinatra must be rolling over in his grave today. Instead of moving to New York, people are moving out of it. In fact, 88,648 residents left the state in their rearview mirrors between 2018 and 2019.

That adds up to a 0.45% decrease in the state’s population. And guess where they’re moving to. New Jersey. We’ll give you a minute to pick your jaw up off the ground.

That’s right. New Yorkers are finding their futures lie in the rival state. Why? The homes are bigger for less. In addition, you can get a yard in New Jersey. Sometimes having one park for an entire city just isn’t a big enough playground.

Population Change: -0.37%
No. of Residents Who Moved: -2,310
Where They Moved To: Florida, New York and New Hampshire

Ah, Vermont. It doesn’t get any better than fresh maple syrup and a snowy backdrop. Or does it? According to 2,310 residents, it does get better.

So what’s so different about Florida? The weather is a given. But really, the 0.37% decrease in Vermont’s population can be attributed to the high cost of living.

With fewer taxes to pay, Vermont residents are kissing their white Christmasses good-bye while saying hello to the sunshine.

Out with Mississippi and in with Tennessee. And it all boils down to one thing: income tax.

An outstanding amount of residents are leaving Mississippi behind in the dust; 10,381 to be exact. While the majority of them named income tax as the main reason, there are a few other reasons as well.

There just aren’t enough job opportunities in Mississippi to keep that 0.35% of the population around. And when it comes to entertainment for after-work life, well, you can forget about that. The flee to the Smoky Mountains doesn’t seem so outrageous.

Population Change: -0.33%
No. of Residents Who Moved: -4,619
Where They Moved To: California, Texas and Washington

Hawaii, otherwise known as paradise, is one of the states losing residents at an alarmingly high rate. In fact, a whopping 4,619 residents moved out between 2018 and 2019.

But they’re not moving that far away. The majority find a new home in California. While California is known to be one of the more expensive states to live in, it’s cheap compared to the cost of living in Hawaii.

When paradise comes at such a high cost, is it really even paradise anymore? Unless you win the lottery, you might have to find a new paradise to enjoy.

Population Change: -0.30%
No. of Residents Who Moved: -26,330
Where They Moved To: Pennsylvania, New York and Florida

With 26,330 residents leaving, you’d have to think there’s something going on with New Jersey. But really, the leading reason for leaving is for a new job.

Louisiana may have voodoo and gumbo, but what the state is lacking in is job opportunities. That’s why the majority of those residents are packing up and moving out.

Population Change: -0.21%
No. of Residents Who Moved: -7,378
Where They Moved To: New York, Florida and Massachusetts

In just a year, 0.21% of Connecticut’s population peaced out of the state. The majority of them went to New York, which tells us one thing: they were chasing a new job.

The sad part is that even if all 7,378 of those ex-residents moved to New York, it still wouldn’t make much of a difference on that state’s declining population.

People move for a variety of reasons. Lower taxes, better job opportunities, warmer weather. But whatever the reason, they all have the same goal.

They just want to live somewhere that’s going to improve their current quality of life. This is why these 10 states are losing residents faster than gaining them.

The table below shows how many residents are ditching each state for a better living standard.