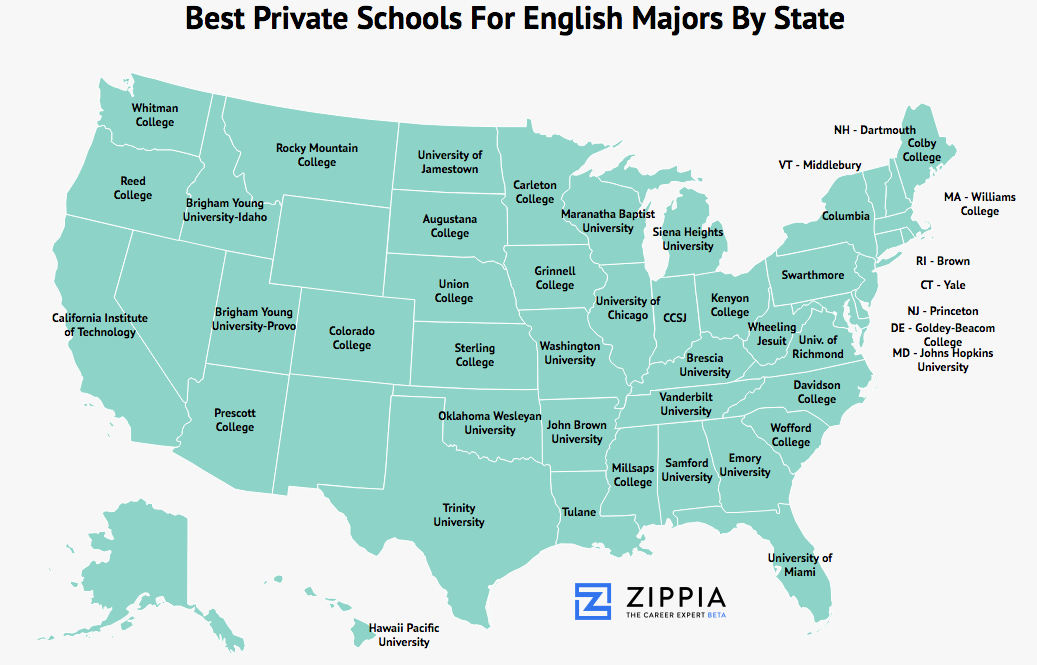 The Best Private Colleges In Each State for English Majors

There is a surfeit of reasons to pursue a degree in English — the intellectual challenges, deluge of job prospects (sort of), training in forming cogent arguments, and the opportunity to learn how to use surfeit, deluge and cogent.

But one of the most important things for college freshmen, if not the most important, is that the program you choose will ultimately prepare you to find a job. In a 2015 study by UCLA, 60 percent of incoming freshmen indicated it’s “very important” that their college’s alumni get good jobs after graduation, from 53 percent in 2013.

And for this reason, many students opt for private schools over public. The perks of an educational pedigree — plus smaller class sizes and greater access to resources — overcome the upfront tuition costs with the promise of a higher quality education

So — which of the 803 private schools with English departments in America offers the greatest return on your investment?

We’ve got the full rankings for you at the bottom — but here’s a list of the ten most notable private schools:

How We Determined the Best Schools for English in Each State

We looked at the following data from the NCES (National Center For Education Statistics) and College Scorecard data from ED.gov to understand which English departments offer the best career opportunities:

After we had this data, we looked at the 803 private institutions of higher learning with English departments. We then ranked each of these schools for each of the criteria above with 1 being the best in any given criteria.

We omitted states that didn’t have enough data for us to work with — New Mexico, Alaska, Wyoming, and Nevada.

Williams College was more or less founded by a guy named Ephraim Williams in the town of Williamstown, but the school makes up for Eph’s scintillating lake of creativity with its brilliant English program — except for calling themselves the Ephs, but whatever.

Despite being the sixth most expensive school on our list, it’s got the sixth lowest student debt due to its commitment to affordability.

There’s not a lot of competition in the world of private school English departments in Hawaii, but this one makes our notables list because, with grants, it probably costs less to go to school here than it does to live in a studio in Honolulu. Seriously though, it’s the second most affordable school on the list that isn’t affiliated with a church.

The problem with the Middlebury College is that it’s in Middlebury, VT — which is in the middle of nowhere, so prepare to bury your head in your books. Yeah that one was pretty terrible — I might write better material if I was in the English Department there, which is phenomenal. But seriously, learn to ski because there’s not much else to do in the area..

If you’re looking for a traditional party school, BYU might not be for you. However, it’s one of the most affordable schools on the list and has almost four times as many students as the next biggest school on the list and some genuinely phenomenal athletics programs, it’s a very notable school indeed.

Vanderbilt University touts a remarkable student–faculty ratio of 8:1. It also has an estimated 3:1 squirrel-student ratio and boasts a 1:5,935 Al Gore alum-student ratio.

Despite its location in a quaint college town, there is plenty to do around campus if you look hard. It boasts the highest six-year median salary of all of the schools on our list — also, the Columbia Bartending Agency and School of Mixology is affiliated with the university, which gives English majors an edge on future career competition.

Academics and faculty aside, there’s something to be said for getting a liberal arts degree in a city with such a unique concentration of cultures like New Orleans. It’s also an excellent school to attend if you’d like to watch a football team lose in the Superdome but can’t afford Saints tickets.

Kenyon is known for it’s focus on writing and boasts the highest percentage of English Majors of all of the private colleges in the country. The student body exercises this talent by posting a copious amount of scathing dining facility reviews online.

Davidson is notable for being one of the few small, liberal arts colleges with a high concentration of English majors on this list with a fairly conservative atmosphere — also, they do your laundry for you. Totally worth the tuition.

This is probably the most storied program on the list, and the strongest for those who wish to pursue a career in academia. It’s focused on close reading and analysis, with creative writing seminars that are competitive to get into — however, these aren’t restricted to English majors.