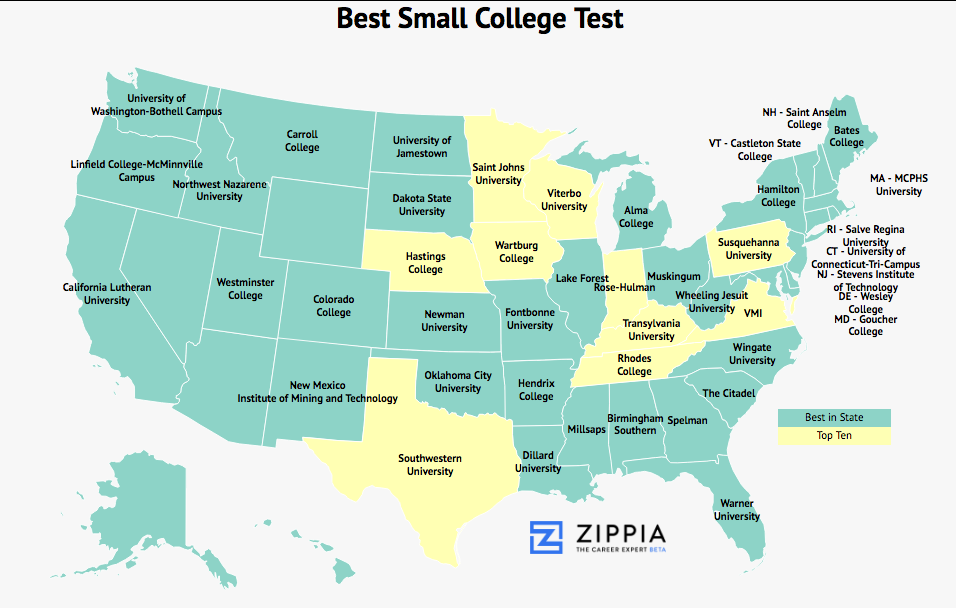 A 2015 UCLA study shows that 60 percent of incoming freshmen indicated it as “very important” that their college’s alumni get good jobs after graduation, up from 2013’s 53 percent.

Not all schools are equal in job placement success — or size — and some colleges are vastly more supportive of their students’ post-graduation concerns than others. For this reason, many students are willing to give up dominant athletics and research departments in exchange for smaller class sizes and greater access to resources that comes with a small college.

And our research shows that this pays out for employment — six of the ten best colleges for jobs are small schools, which for the purposes of this study are 1,000 to 2,000 students.

To help showcase some of these stand-out small guys, we at Zippia put together a list of the top small schools by state in terms of college placement ratings.

Below is a list of the top fifty, but first, here are the best of the best:

How did we figure this out?

Using information found on the Integrated Postsecondary Education Data System (IPEDS) , we searched for the college in each state with an enrollment level between 1000 and 2000 that had the highest listed job placement ratings, looking specifically at employment levels 10 years after students have graduated.

Then, we looked at the ratings themselves and ranked each state’s top school according to their rating. For the purposes of readability, each school’s rating was then rounded to one decimal place, and we included the city each state’s top college was located in.

College: Virginia Military Institute
City: Lexington
Placement Rate: 96.6 percent
VMI’s rigorous academics and high standards certainly have something to do with employers’ likelihood of hiring graduates from here, but I’m sure all the cannons and military training don’t hurt either.

College: Saint John’s University
City: Collegeville
Placement Rate: 96.4 percent
”Hey Steve, what name were we thinking for this town over here? Yeah, the one with the college in it. Does ‘Schooltown’ work? No? How about ‘The Education Location’? Too long, huh. Wait, hang on, I just thought of a pretty good one.” — Frank Minnesota, state founder, moments prior to naming the town of Collegeville, MN.

College: Hastings College
City: Hastings
Placement Rate: 96.1 percent
Hastings is a self-proclaimed “best buy” school, based on the fact that they’ve been named by Barron’s and Washington Post as being among the most affordable colleges in America. Not to be confused with the retail store “Best Buy,” which unlike Hastings is in no way an affordable place to spend your time.

College: Wartburg College
City: Waverly
Placement Rate: 96 percent
The only private college in Iowa to offer a music therapy major, Wartburg is very proud of its strong German heritage. Their school motto is “Ein feste Burg ist unser Gott,” which in English of course translates closest to “A festive Burger is all we Got.” (Source: The one semester of German I took in college.)

City: Memphis
Placement Rate: 95.8 percent
Rhodes College is especially well-known for its mock trial program, which is one of the most prestigious in the country. The fact that there’s no joke in this caption versus the others on this list is in no way related to how many Rhodes College grads go on to become lawyers.

College: Susquehanna University
City: Selinsgrove
Placement Rate: 95.5 percent
Susquehanna was rated 54th best liberal arts college by Washington Monthly, and 1st most likely college to be slightly mispronounced by me the first time I have to say it out loud.

College: Viterbo University
City: La Crosse
Placement Rate: 94.7 percent
This small Catholic school known for its nursing program was founded more than a century ago by the Franciscan Sisters of Perpetual Adoration — who figured a city named after a crucifix was as good as any.

College: Southwestern University
City: Georgetown
Placement Rate: 94.6 percent
Southwestern has about 1,300 students — with a 56–44 female to male ratio — which leads to a lot of online forum complaints about the dating culture for women. This is compounded by the other chief complaint, that the cafeteria food makes everyone gassy.

College: Rose-Hulman Institute of Technology
City: Terre Haute
Placement Rate: 94.5 percent
On the other end of the spectrum, you have the pure-STEM RHIT — which boasts a 21–79 female to male ratio — and some say stands for “Rich Husbands in Training”. Students are known for posting job and internship offer letters on the outside of their doors, which is a kind of outmoded form of pretentiousness for an engineering school.

That said, the median starting salary for graduates is $60,700, so there’s that.

College: Transylvania University
City: Lexington
Placement Rate: 94.2 percent
This college that has resisted the urge to make their mascot a vampire was actually founded a century before Dracula and was the first college founded west of the Alleghenies, but it’s kind of hard to resist low-hanging fruit… unless you’re a vampire.

Because of the importance of placement rates to incoming freshmen, it can often be tough to tell who to trust with these numbers. While some institutions go to great length to ensure their numbers are as accurate as possible, not all are as diligent — or (let’s just say it) as honest.

Fortunately, there are still plenty of groups around who remain the impartial watchdogs they were intended to be.