Do Women Get Out of More Tickets? Not so Much in Rush Hour.

by David Luther
Study - 3 years ago 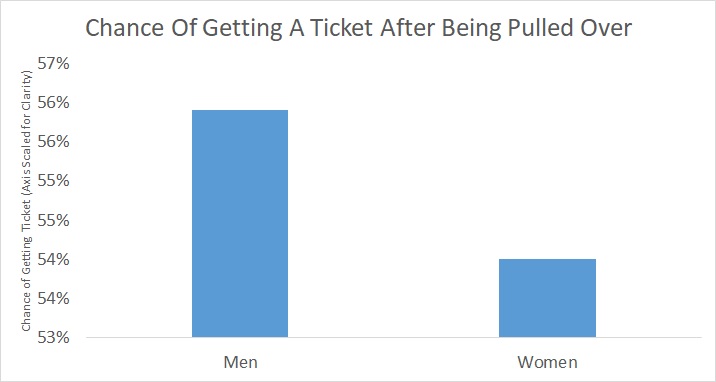 Well, here’s the bad news: besides costing you your sanity, our research shows that more tickets are given out during rush hour periods — meaning you could be spending your day working just to pay for the ticket you got driving to work.

And as if the soul-devouring 52 minutes (average American commute) each workday didn’t cost you enough — mental health, auto wear-and-tear, gas money, and time you could spend at the gym sleeping — the average cost of getting a ticket is $152.

So how can you keep from financially spinning your wheels while driving to and from work?

The good news (for a very specific demographic) is that there appears to be something you can do to reduce the number of tickets you get. You know, like, other than driving at the speed limit in a legally outfitted car.

Yep, the stereotype is true: our data shows that after being pulled over, women are in fact more likely to get away with a warning. Of course we’re going to delve into it, since the whole thing is a little bit more complicated than that. So strap in and buckle up — it’s the law.

The ticket study’s source and reasoning

We used data gathered by Stanford researchers to run an analysis on more than 3.28 million traffic stops in five states — and as a comparison, a similar paper from the Federal Trade Commission was satisfied with data from just one.

This study sought to observe ticketing patterns after the stop. Some studies examine factors that determine individual officers’ decisions to make traffic stops: vehicle speed relative to traffic flow, car markings and colors (and the worst one is white, not red), and whether that particular cop woke up on the wrong side of the bed affects citation rates or not.

This isn’t one of those studies.

We just wanted a simple observational study about when you’re most likely to get a ticket. But in doing the analysis, our data showed that not only do women get fewer tickets after the stop, but they get out of tickets more during certain times — and this time-of-day phenomenon is gender-neutral.

And yes, men do get more speeding tickets. 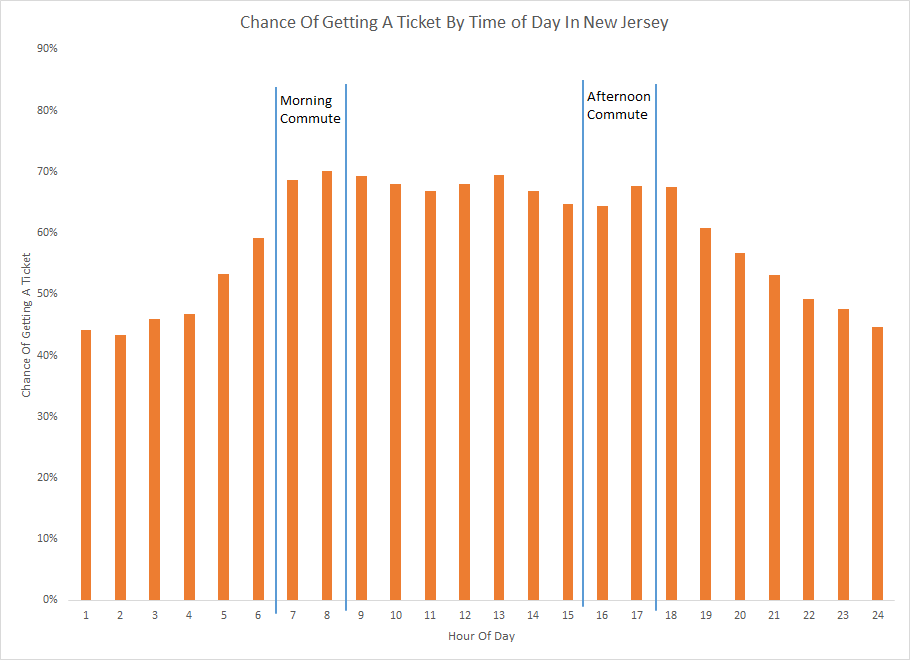 You race to work in the mornings because you’re running late.

In the evenings, you’re racing to get home because you’ve got four seasons of Game of Thrones left to binge rewatch before the new one starts.

Police officers know this, and unless you’re also Jon Snow and can leak spoilers to get out of a ticket, this is when your traffic stop is most likely to result in a ticket.

Across the board in every state, we find that rush hour traffic has the worst rate for ticketing, with 62.2 percent of traffic stops in rush hour resulting in tickets as opposed to 54.3 percent beyond common commute times.

What’s interesting about this rush hour phenomenon is that while women’s citation rates are still lower than men’s during the peak ticketing times, the margin is narrower:

Pulled over at a similar rate, women escape tickets more

In case you were wondering, when controlling for location, gender, and time-of-day the general, overall chance of getting a ticket is 56.8 percent after that initial oh shit moment when those familiar lights and sounds are in your rearview mirror.

But men tend to get pulled over more than women; that’s a fact and not an especially recent development. According to the Bureau of Justice Statistics (BJS), 11 million male drivers and about 7 million female drivers are stopped by police nationwide in a given year.

And that’s actually in keeping with driving patterns. As a group men drive about 40 percent more miles than women, even though there are about a million more women driving.

The thing is, our research shows that not only are men pulled over twice as often — when you break it down, 59.2 percent of men get tickets when stopped.

For the ladies with their licenses and registration ready, wondering what their chances are while they watch the cop do his slow stroll towards their window, 54.4 percent of female drivers are ticketed — meaning that about 63.4 percent of all traffic tickets are issued to male drivers.

The fact that men drive more than women certainly contributes to the inequality in traffic stops, but there are likely some behavioral factors coming into play too.

As we mentioned earlier, the sexes share a similar rate of traffic stops, with speeding being the most common reason for the stops, as reported in Traffic Psychology and Behaviour:

Men have a reputation for driving more dangerously, and while even voluntary surveys indicate that men tend to drive at higher speed, an Insurance Institute for Highway Safety study morbidly and factually indicates the same thing: men are about 150 percent more likely to die in speeding accidents.

Officers have different thresholds for what it takes to both pull someone over and to issue a citation, and while both sexes may be driving at speed high enough to merit a stop, the severity of the men’s infractions may go well beyond the officers’ thresholds for issuing citations.

Maybe men should try flirting more, which 8 percent of women admit to to get out of tickets. That said, considering that 88 percent of police officers are male, the 4 percent of men who’ve tried it are pretty bold.