Survey: How Many People Lie On Their Resumes?

What would you to get the job you wanted? Shoot, what would you do just to get your foot in the door? Would you go as far to lie on your resume? Maybe just bend the truth a bit?

We conducted a survey on resume behavior to uncover who lies on their resume, what they lie about, and how those lies work out for them.

The results? Some people are far more likely to lie on their resumes than others.

How We Determined These Results 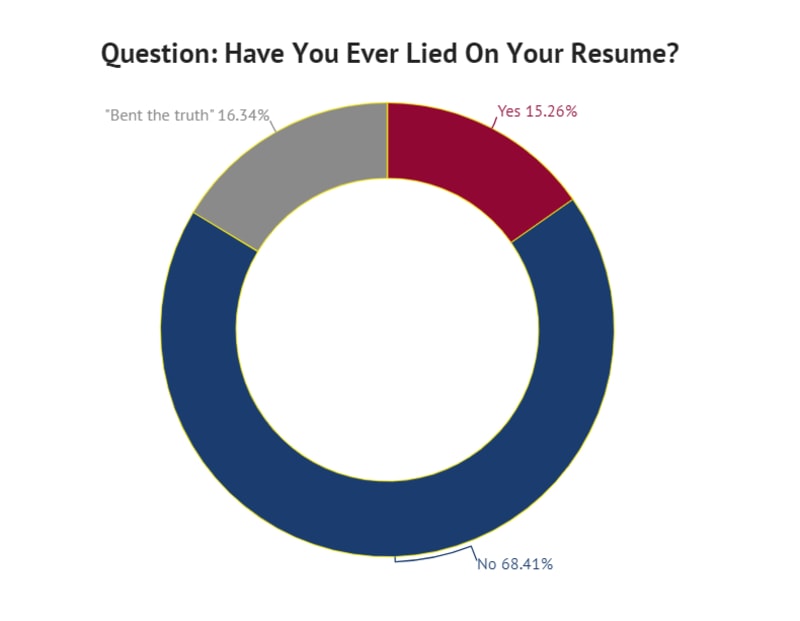 More than 30% of people have lied or “bent the truth” on their resumes. Next, we broke down these answers by age to see if certain age groups lie more than others. 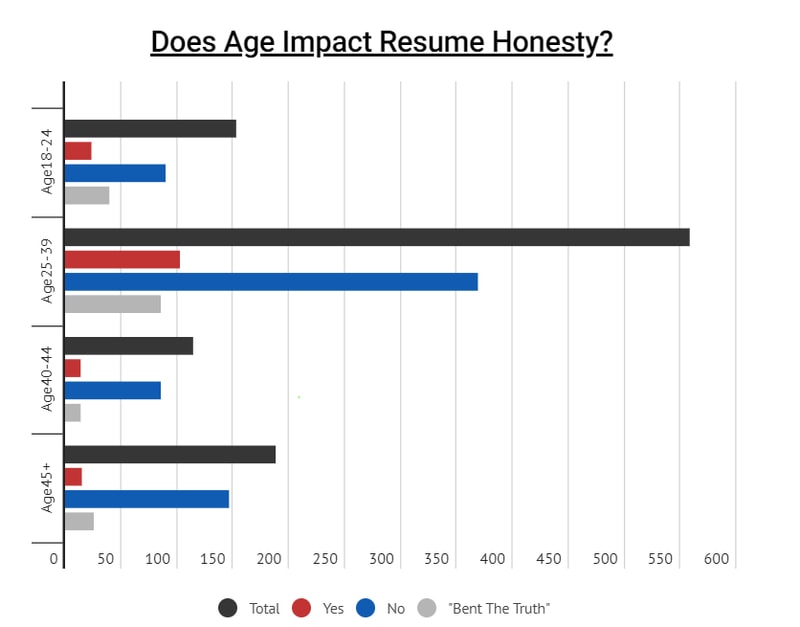 18% of 23-to-39 year old admit to outright lying on their resume. This makes millennials the most likely to lie on their resume. Meanwhile, 41% of Gen Z’ers only “bend the truth.” The most honest age group? Those over 45 only lie 7% of the time. Next we moved on to education level. 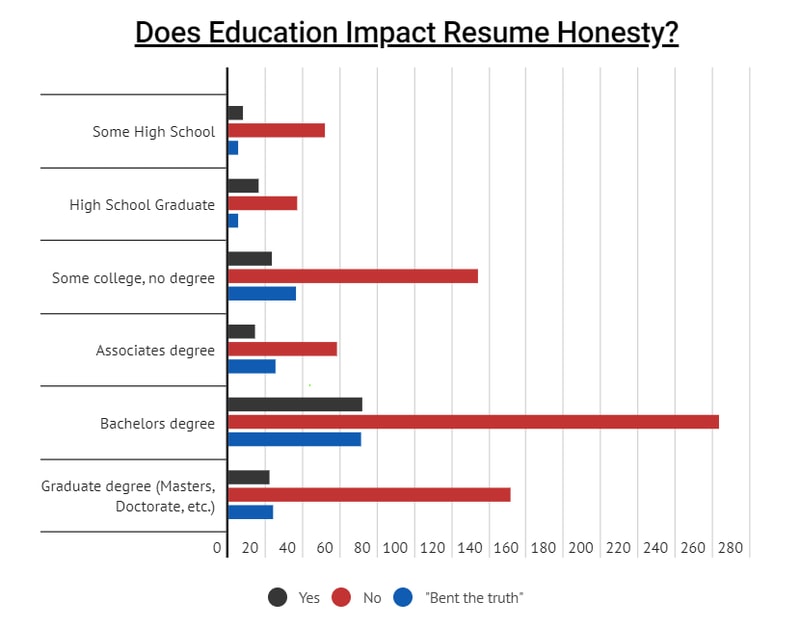 High school graduates are the most likely to lie on their resume. 27% admit to lying on a resume.

Far below is people with their bachelor’s degree as the #2 most likely to have their pants on fire. 18% of college grads admit to lying on a resume. The least likely to lie? Only 11% of people with advanced degrees lie on their resumes. 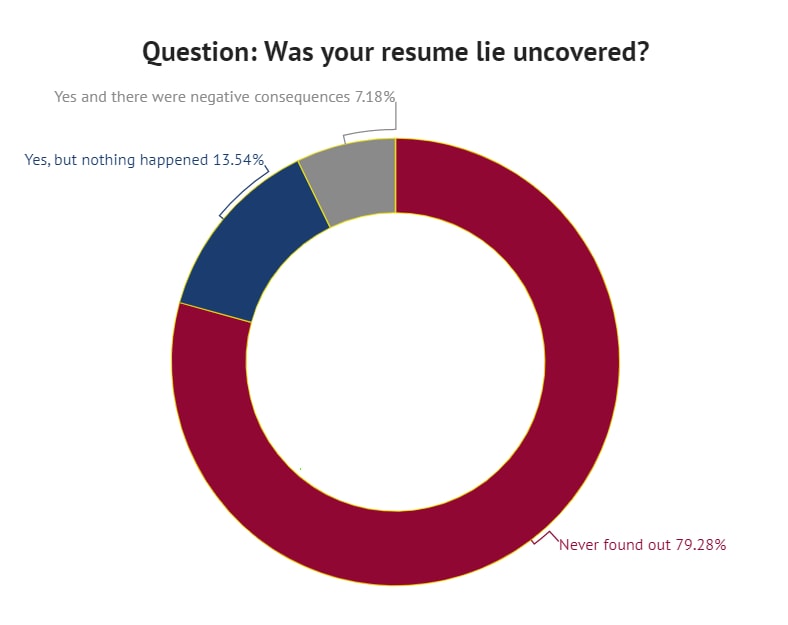 Most people who lie on their resume are never found out, or face any consequences. That they know of, anyways. 8% of liars admit to facing “negative consequences.” 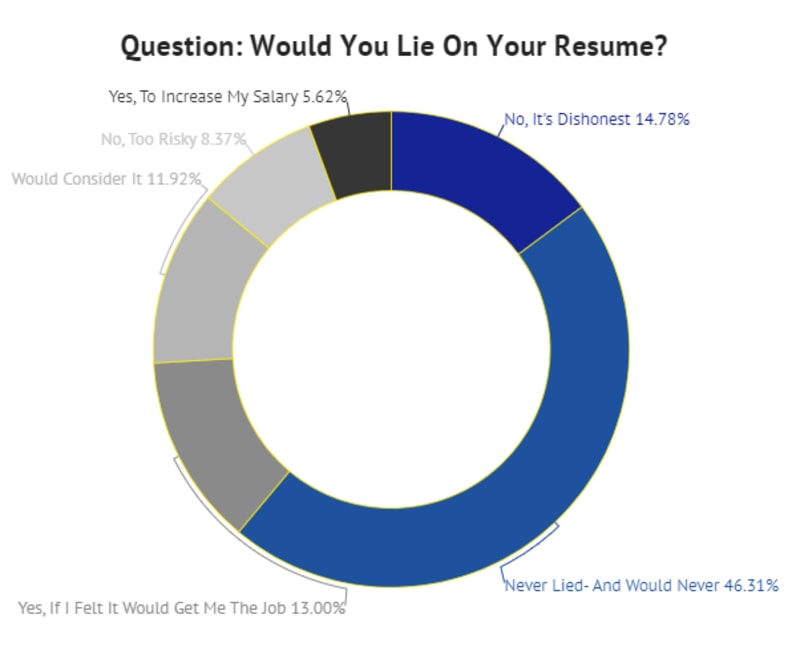 This question was interesting. While 46% of people answered they “never lied and would never,” that is a drop off from the 68% of people who have never lied on their resume. This indicates a large number of people are willing to lie — they just haven’t needed to or been tempted yet.

What would motivate them to fib or tell a big whopping lie?

13% say they’d lie if it would secure them the job. Another 5.6% are a bit more ambitious- they’d lie to increase their salary. Meanwhile, an impressive 41.2% of Gen Z’ers only “bend the truth.”

Look, You Probably Shouldn’t Lie On Your Resume

30% of people may lie or bend the truth on their resume, but that doesn’t mean it’s a good idea.

When applying for jobs, lying about your experience or education is a recipe for disaster. While almost 80% of people in our study say they didn’t face repercussions for lying on their resume, that doesn’t mean there weren’t any consequences.

If a hiring manager notices you stretched the truth about your technical abilities or a reference check doesn’t clear, they probably won’t tell you. They simply won’t hire you and you’ll be none the wiser to the lie that cost you a job– and potentially blacklisted you with an entire company. No one wants to hire a liar.

Instead of lying on your resume, work on strengthening your skills and how to communicate your value in a well-written cover letter. The hiring market is burning hot and you might be surprised to find the jobs you can land with your actual experience.

Ever lied on your resume? Email kmorris@zippia.com to share your story.