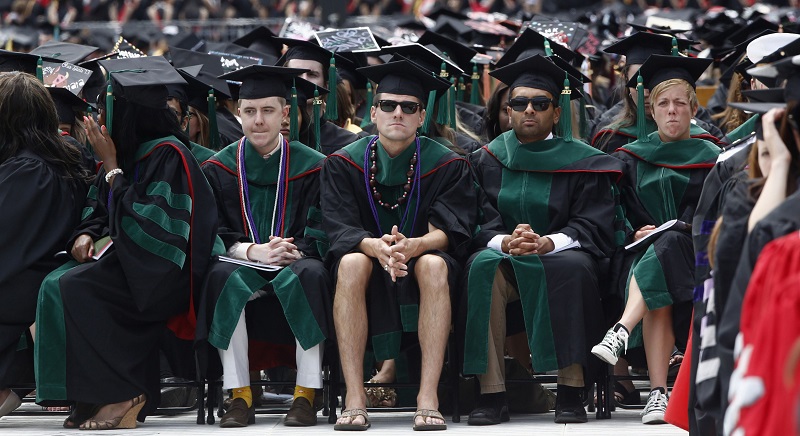 by Ryan Morris
Major-Specific - 3 years ago

1. Everything’s Just Feels Better on Paper to You

People seem to think that most English majors prefer physical, paper books over Kindles or tablets. Clearly, that’s not the case.

The truth is that every English Major prefers paper books. Tablets are too bright and they hurt your eyes and you can’t really feel the words on a tablet like you can in a book, man. You know, man?

The fact of the matter is that even in the modern era of Amazon and instant gratification, buying a physical book is just more exciting than buying a digital copy.

You buy a book and you get to either walk around a bookstore for 9 hours (which I’d do anyway) or you’ve purchased it online and have to wait for it to arrive. Either way, all of a sudden it’s an event. It’s like opening a present you got for yourself, which is the best kind of present, because you’re an English Major, which means no one truly understands you but you.

In contrast, buying a book online feels like you’re renewing a subscription or something. You just click a button and instantly watch yourself lose a little bit of money. Sure, you still get the book, but it just feels a little bit wrong.

If You’re An English Major, This Will Help You Land Your First Job
We analyzed millions of resumes to determine what jobs people with

English majors are most likely to get right out of college.

2. So How’s That Novel Coming?

“And then my best friends Shrek and Sonic the Hedgehog started holding hands with each other. This is going to be an interesting year at Hogwarts, I thought to myself…”

Every English major that has ever existed in the history of forever is, at any one time, juggling about 9 or 10 different ideas for novels. Over the course of their life, they will write approximately a billion different Prologues and about a quintillion unrelated Chapter Ones, which will sit totally unread in whatever Google Drive folder they’ve reserved for them.

Now, will most of these novels get finished someday? Of course not.

But will some of those failed novels help you get closer and closer to finally landing on that million dollar novel idea?

Also probably not, no.

Novels are hard! They’re super tough to write and they take forever, and why would you ever write a whole one when there’s a new season of Series of Unfortunate Events on Netflix?

Anyways, the point is that you’re creative.

3. English Majors are All Anglophiles

Pictured: Someplace in England. Stonehenge or something, probably. Idc.

If there’s one thing that I love about English majors, it’s how quickly they seem to fall in love with British culture.

Whether it’s the freshman who won’t stop talking about how Billy Shakespeare probably didn’t write his own plays, or the Elementary Ed. major laboriously detailing every possible Pride and Prejudice reference in Downton Abbey, there’s a decent chance that somewhere in your English Department there’s a few folks who enjoy British culture a lot more than the British ever did.

Most of these anglophiles are relatively harmless — they have more of an affinity for our friends across the pond, and have great respect for classic British authors like Dickens or Blake. Heck, most of my friends’ favorite authors were either British or were at least recovering Brits.

There’s a good reason British Literature is usually its own separate discipline — it’s a rich and varied field of literary study with its own unique set of tropes and quirks, and there’s plenty of reason that American English Majors would have to enjoy those works.

Just don’t let these people convince you to watch Doctor Who, or let them talk to you about how British humor is “just so much smarter” than American humor.

4. Everyone Had That One English Teacher Who’s Totally Inspirational

Ah yes, with my glasses, I now understand “English.”

If you are or were an English Major, there’s no way you got there without someone earlier on who showed you why you should be interested in reading books. And given how many of your waking hours during childhood were spent sitting at a desk while being talked at by a bunch of giants, odds are that someone was one of your teachers.

Whether they believed in you when no one else would, nurtured your latent literary talent, or just made snarky comments while explaining the plot of Jane Eyre, the first time you have a teacher that you really like and trust likely has a strong correlation with the first book you actually read cover to cover (and enjoyed).

5. The One Job Every English Major is Qualified For: Teaching

Now, hang with me for a second.

Obviously — obviously — not everyone who is an English Major wants to teach. That would be ridiculous and obscene, not to mention terribly presumptive.

There’s such a wide variety of jobs and specializations available to English majors that the very idea that the majority of English Majors would prefer teaching over all the other opportunities knocking on their door is, if nothing else, a little demeaning to assume.

If you were to tell me that you were an English Major who hadn’t heavily considered teaching at one point or another during your college career, I’d ask if there was also a bridge you were trying to sell me. There’s just no way a person gets through the system that is the modern college English Department without ever getting to the point where teaching was looking more and more like the right way to go.

Once you start pushing the boulder that is Academia, you’d be surprised at how quickly it gets rolling. Even if teaching was never in the cards for you before, the more reading you do and papers you write brings you closer and closer to looking at teaching as the next logical step, if only because it’s what you’re being prepared for. If there’s one thing teachers know how to do, it’s teach, so it makes sense that a lot of the skills necessary for teaching are the kind of skills they’d be passing along to their students.

I totally get those English majors who are offended when people ask them if they want to teach — but at the same time, there’s no way they haven’t already been forced to consider it as an option one way or another.

In any case, wanting to be a teacher is not a bad thing — in fact, it’s one of the most rewarding careers out there. It’s a tough job, and it’s definitely not for everyone, but I wouldn’t be so worried about people assuming you might be interested in it. Take it as a compliment — it takes a lot to be a teacher.

Hard to avoid, given the preponderance of them. And the fact that they tended not to let a whole lot of folks outside of this narrow demographic get published up until the last few hundred years or so (by the most liberal of estimates).

But hey, a problematic fave is still a fave, and odds are that somewhere down the line you’ve found somebody published before the sinking of the Titanic whose work has spoken to you — you are, after all, an English major.

If you’re one of those people who’s mostly stuck to recent novels, suffice to say it’s worth making the trip back through the literary canon. You’ll find that the sentences are longer, the words are stranger, and it’ll still surprise you how much in common you can find with characters whose primary concerns are often just not dying of typhus.

And yes, people who drink coffee are demonstrably better than other people — after all, caffeine is a drug, and drugs are awesome and cool.

But we, as English majors, have got to move on from the idea that we’re mean, grouchy people unless we’ve had our coffee, which restores us to our normal non-grouchy state. We need to accept the fact that at a base level we’re probably just a bunch of rude jerks, made into functional adults only through the tenuous rush of a sustained caffeine high.

Only then will people get off our backs about the amount of coffee that we drink, and let us drink it more, and everyone shut the hell up already, I’m trying to drink my coffee.

“This cryptex is a metaphor for lazy characterization.”

No matter how much you try, you’re gonna have a hard time getting out of your English Major without a tendency toward over-analyzing things.

Even when you’re reading for pleasure, or binge watching Daredevil, you’ll have a hard time ignoring the sort of plot holes and nonsensical character choices that before you took for granted. You spent four years of your life doing close readings and interpreting the ideas of people who were usually pretty dead — that’s bound to cause a few habits to form.

Just try not to do it with actual people too much. That’s a quick way to lose friends. Although the less friends you have, the more time you have to read. And drink coffee. And it means you get to be rude.

On second thought, analyze away, coffee cup in hand — just so long as it’s in the margins of the paper edition of your book. You’ve earned it.

After all, you’re an English major. That practically makes you British.