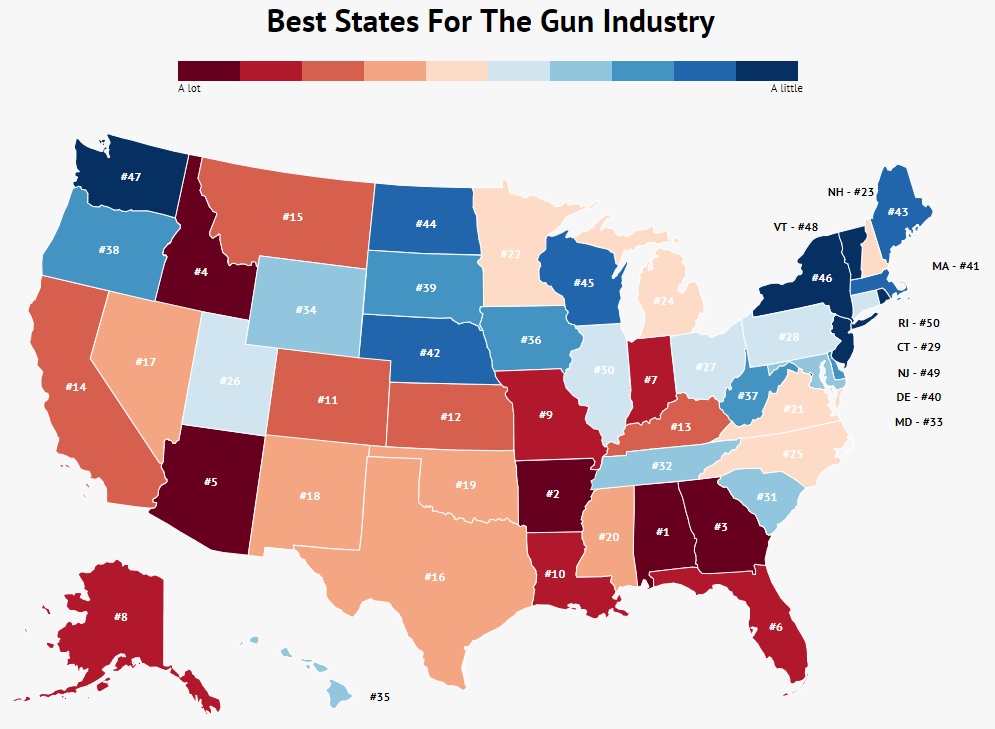 These Are The Best States For The Gun Industry

by Chris Kolmar
Rankings - 2 years ago

Guns are a pretty big business, according to the ATF — and to give you perspective on what we mean by “pretty big”, firearms outlets outnumber Starbucks by more than four to one. For a product that’s a bit more contentious and difficult to get than a latte.

As it is with each shooting incident, the speculatory hornet’s nest has been stirred, begging questions on the future and value of a society beholden to firearms. But we’ll save the constitutional debate for another website and focus on what we do best — looking at employment numbers to see which states benefit the most from the firearms industry.

These are the ten best states for the gun industry according to our data:

A general rule of thumb emerged from the data — head south if you are looking to get one of as many as 141,500 jobs generated by companies that make, distribute, and sell guns. Not to mention the the 159,623 jobs in ancillary industries.

At an average of $50,423 in wages and benefits, these jobs are a boon to state and local economies. So where are all of these jobs?

We have our methodology below and the full rankings charted at the bottom.

Best Companies To Work For In Glendale, AZ

Best Companies To Work For In Jersey City, NJ

Best Companies To Work For In Cincinnati, OH

Gun manufacturing is a complex subject because of the product’s controversy — they’re not widgets that exist in a theoretical vacuum. A variety of considerations have to be made when determining the factors that affect this question the most.

1. Gun jobs. The primary concern of this study is the amount of jobs in each state. The single strongest factor was a composite of the raw number of gun jobs and per capita gun jobs from the National Shooting Sports Foundation, added to the number of licensed manufacturers from the ATF.

2. State friendliness to manufacturers. Our next consideration was how states treated firearms. Our index took into consideration the number of states laws concerning gun manufacturers and dealers and each state’s percentage of federal excise taxes from the manufacture and sale of guns.

3. States’ gun cultures. Both anecdotal evidence and statistical data show that a state’s gun culture is strongly correlated to a positive production environment — so we looked at the percentage of homes with guns in each state, the total number of guns in each state, and guns per capita. We factored in the number of regulations on buying guns as well.

4. Other factors. We threw a little spice on all of it by factoring in whether a state mandated that manufacturers give employees breaks, if states are right-to-work, and average wages for employees.

So what’s the takeaway?

Gun makers prefer states that support gun rights in general, even if the state laws on production aren’t prohibitive.

There’s also the possibility that states that have a gun friendly constituency have an easier time making allowances for gun companies than states with vigorously opposed voters.

Best Companies To Work For In Detroit, MI

Best Companies To Work For In Wichita, KS

Best Companies To Work For In Arlington, VA

States that benefit the most from the gun-making industry 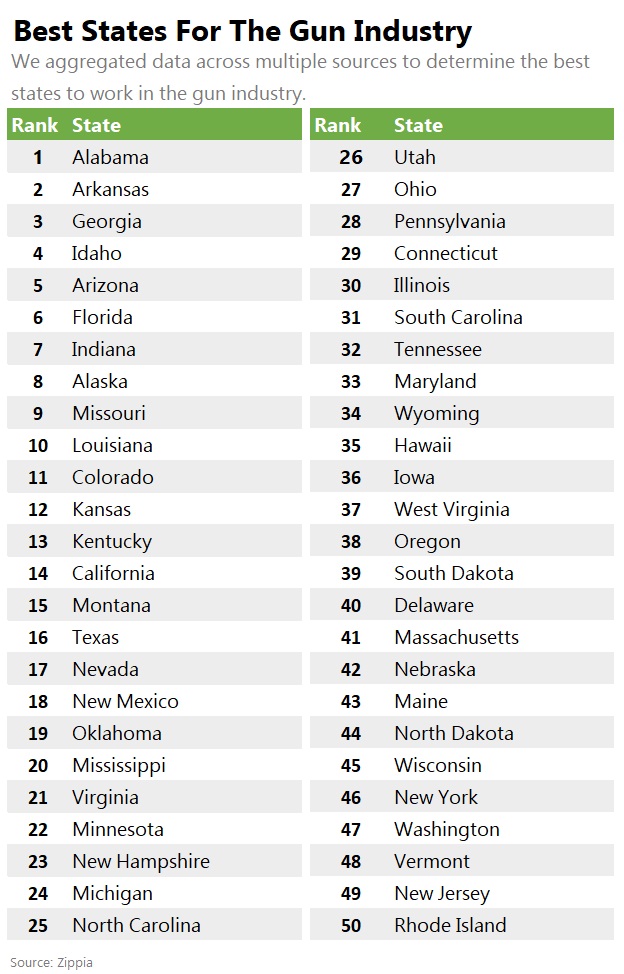