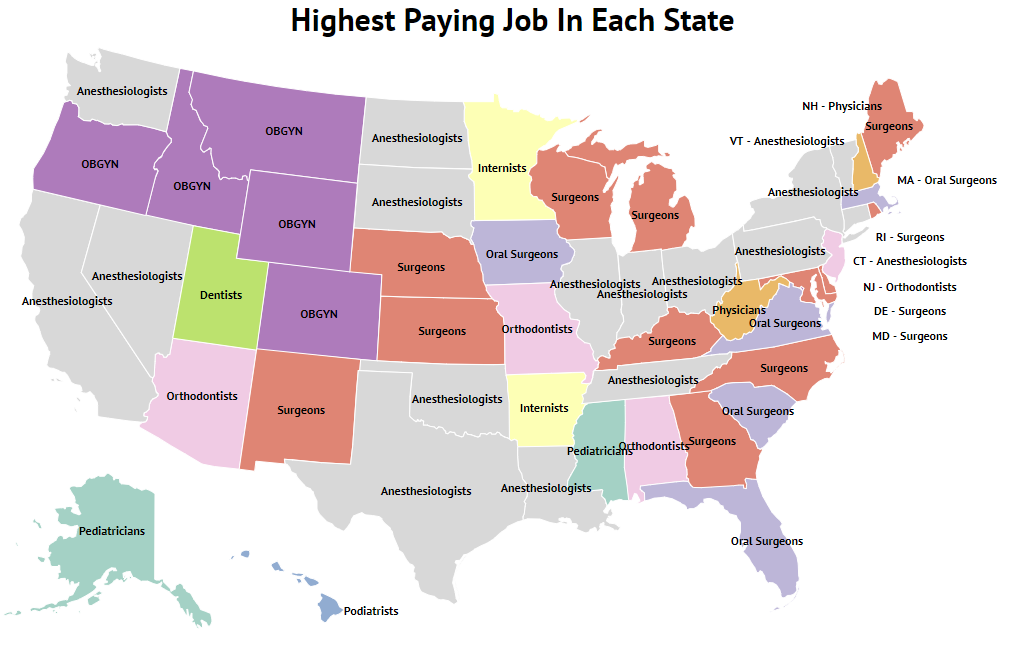 Have you ever wondered which jobs in America get paid the most?

One of the foundations of capitalism is that some jobs are compensated at a higher level than others. The particular jobs that are being paid more vary widely depending on a number of factors, including the current year’s events, recent technological developments, and economic factors like recessions.

However, much like the Highlander, at any particular time there can be only one (highest paying job, that is). We were curious what those were for every state, so we looked at the BLS statistics on the subject, along with the lowest paying.

Based on the maps we have so far, it looks like square states (and the Midwest states in general) are the places to be for many of these white collar positions.

Best Companies To Work For In Anchorage, AK

Best Companies To Work For In Reno, NV

Best Companies To Work For In Atlanta, GA

How did we figure this out?

This one was fairly simple: by looking at the Bureau of Labor Statistics website, we were able to compile a list of the jobs in each state that had the highest annual salaries based on information from 2017 (The most recently available data set.). That was all it took for the highest paying jobs list.

For the lowest, certain jobs did not have hourly salary ranges, and so were excluded from the ranking; besides that, the list was compiled in the same way as the highest paid list.

Here’s hoping that this information helps you find what you’re looking for in your career. If you need more information about any of these jobs, be sure to check out our website to compare salaries, look at job listings, and get additional information about the career paths of dozens of different jobs, such as anesthesiology, orthodontistry, or surgery.

Detailed Breakdown Of The Highest Paying Job In Each State

Best Companies To Work For In Lincoln, NE

Best Companies To Work For In Kansas City, MO

Best Companies To Work For In Baltimore, MD

Best Companies To Work For In Fremont, CA