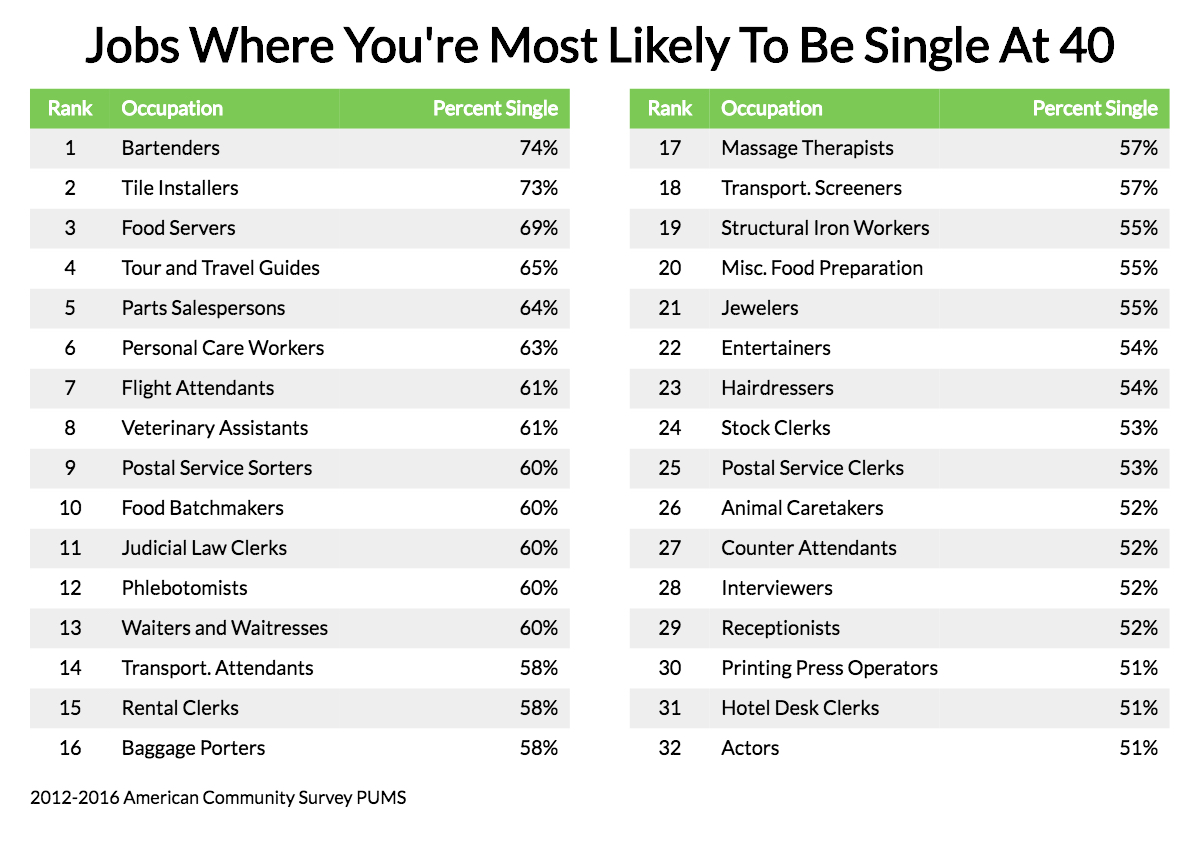 People can be workaholics.

Sometimes work becomes so hectic that people can block out everything else in their life – including love – in hopes of making a successful career for themselves.

There’s nothing wrong with that. In fact, being single longer is a trending topic in today’s society. There are plenty of benefits of staying single and marrying later in life.

Being financially independent, creating a successful career for yourself, and building a strong network of friends and coworkers are just a few of the things one can focus on if they’re not wrapped up in a committed relationship.

That’s not to say those things are impossible if someone is married, either. There’s just a lot of time that tends to be invested in those serious relationships that could be used for other things by single people.

Still, the thought of one being single later into their life made us wonder – what types of work are these people in that has them so wrapped up?

We looked through some Census data to see which jobs are most common for single people at age 40.

Best Companies To Work For In Columbus, OH

Best Companies To Work For In Dallas, TX

A logical reason why so many bartenders tend to remain single is that the majority of their income comes from their patrons’ tips – which can be increased with a little friendly flirtation.

That’s definitely not a bad thing either when bartenders in some of the bigger cities are raking in six figures annually.

As mentioned before, a lot of the most common jobs for single 40-year-olds appear to fall under industries with high turnover.

A possible explanation for this could be that workers are so concentrated on their craft and making their careers as stable as possible, that they cannot fit a serious relationship into their personal life schedule.

A lot of these positions also offer the opportunity to travel for work, too, so people may believe that they’re better off traveling solo than bringing a partner along.

Finally, a fair amount of the jobs listed have a commission aspect to them. There may be incentive to work longer hours with the opportunity to be paid more, again decreasing the opportunity workers have to enter a serious relationship.

Analyzing data from the 2012-2016 American Community Survey PUMS dataset, we looked at all full-time workers aged 40 and ranked their professions by the percentage of workers who were single.

We then separated the study into men and women and ran the same calculations to see what are the most popular jobs for 40-year-olds by gender. 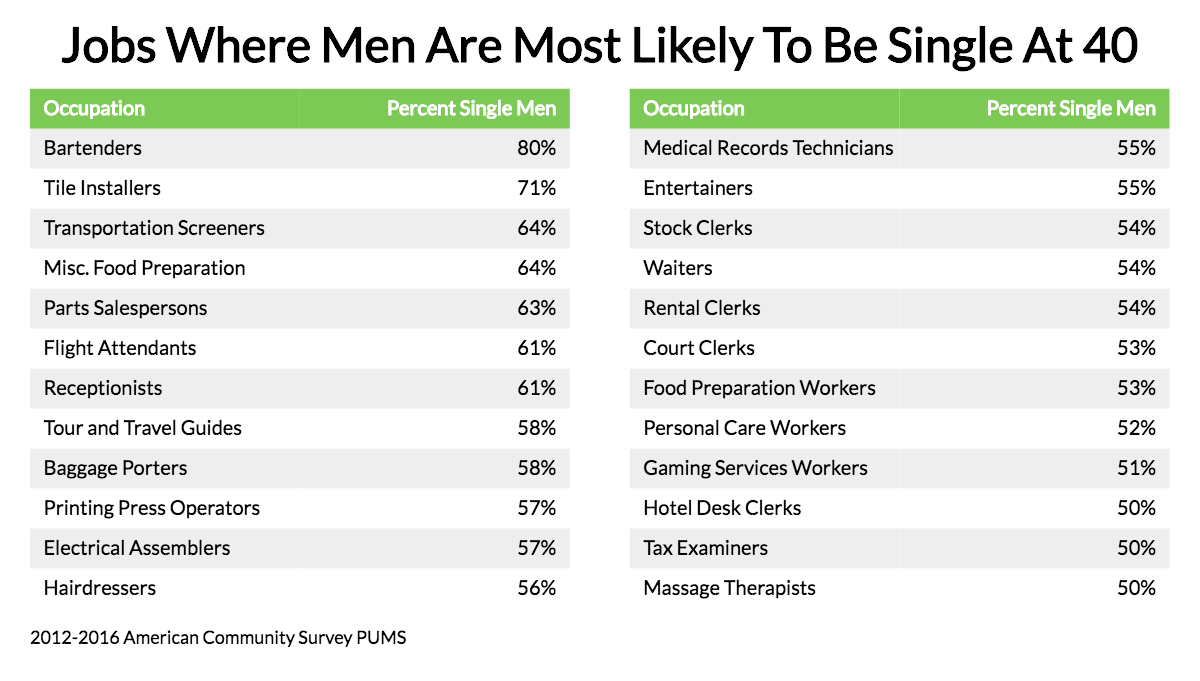 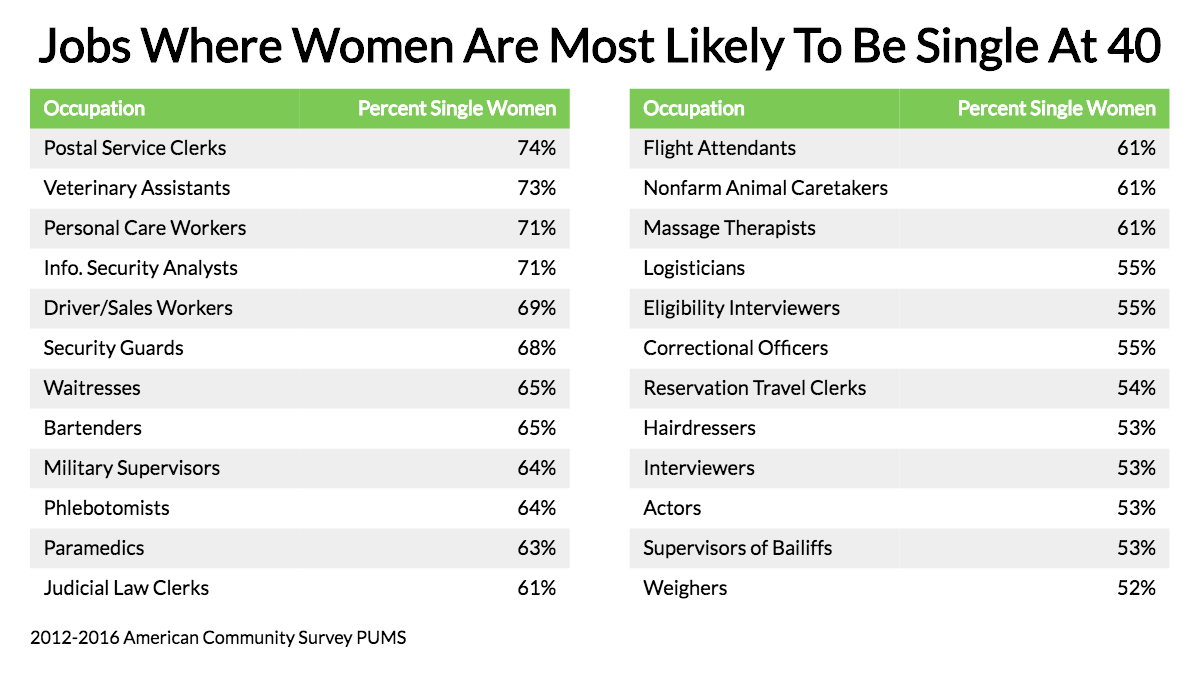 As the millenial marriage rate continues to decline and the number of Americans who will always remain single and never marry continues to rise, the percentage of single workers in the workplace can be expected to rise, too.

A study by the Pew Research Center displayed that women most want job stability in a potential partner. However, as participation in the labor force among men has fallen in recent decades, that’s becoming less likely.

Jobs where you’re least likely to be single at 40

Just for kicks and gigs, we wanted to see which jobs are most likely to be in relationships by 40. 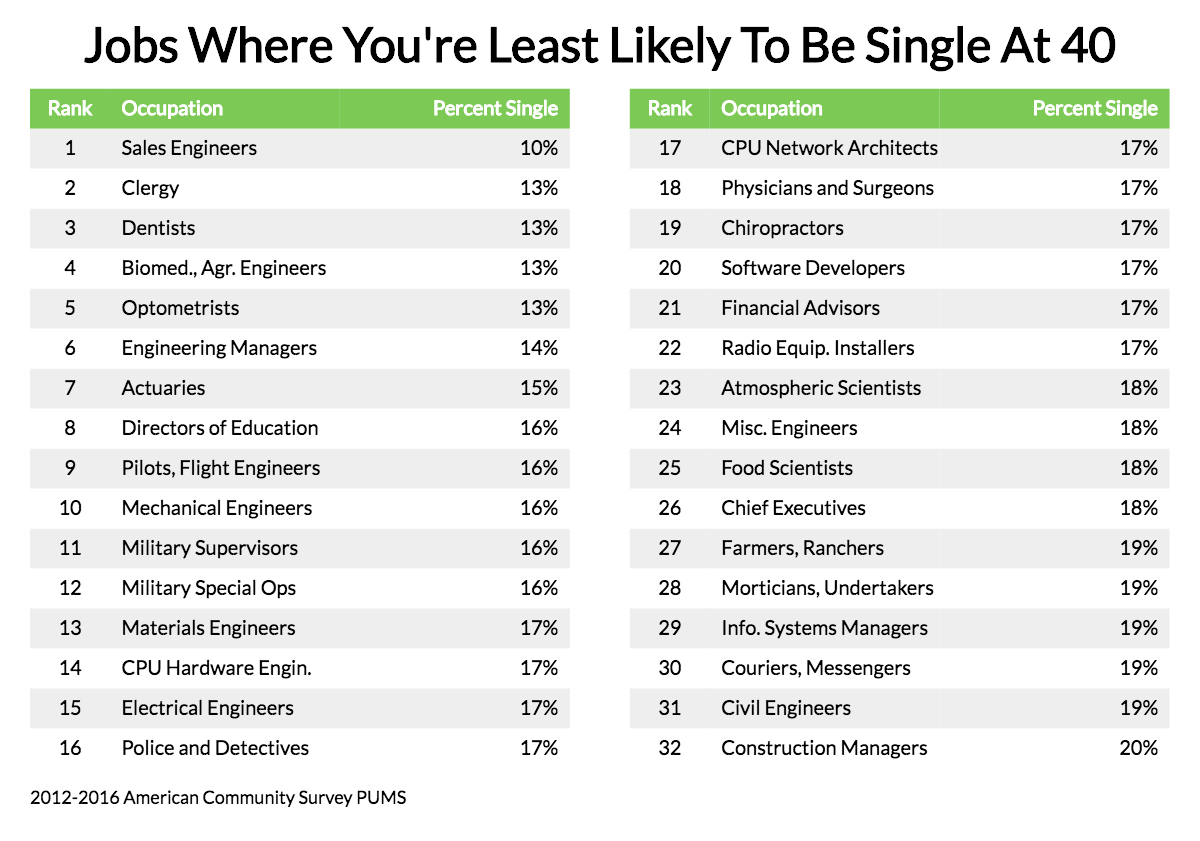 Best Companies To Work For In Jacksonville, FL

Best Companies To Work For In Los Angeles, CA

Best Companies To Work For In Greensboro, NC

Best Companies To Work For In Chicago, IL