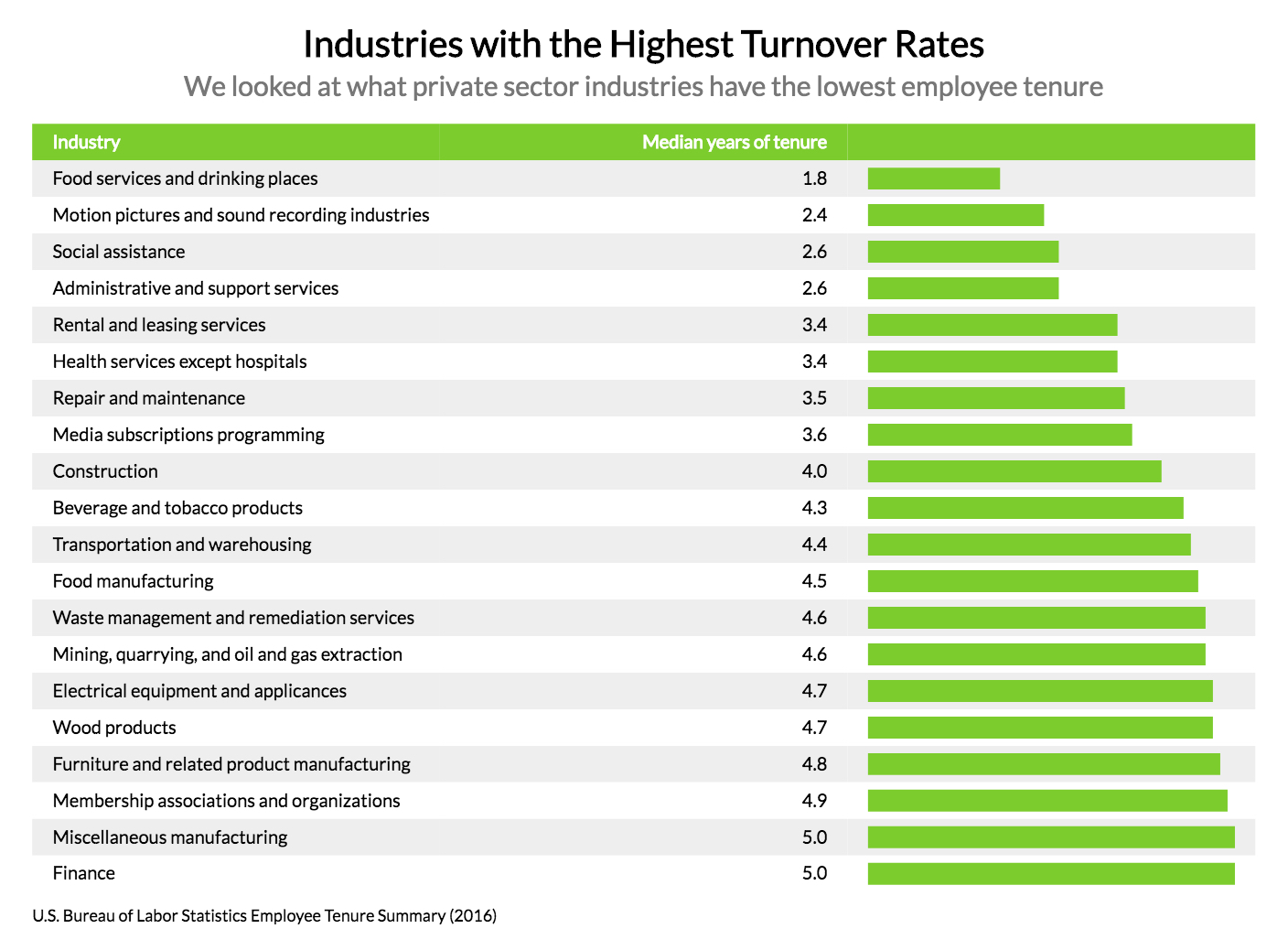 These Are The Industries With The Highest Turnover Rates

PSA to all the graduating seniors who are freaking out about taking the perfect job right out of school:

This first job you have, probably won’t be the last job either. At least that’s what the stats say.

Recent data from the Bureau of Labor Statistics shows that the average number of years that wage and salary workers had been with their current employer was 4.2 years as of January 2016. That’s the lowest since the stat was 4.1 in January of 2008.

These are the 10 industries with the lowest median years of tenure (employees in these industries stay at their jobs the shortest length of time):

As you can see, there are plenty of job fields where the turnover rate is high.

Using the Employee Tenure Survey, a bi-annual study conducted by the Bureau of Labor Statistics which focuses on how long workers have been at their current jobs, we looked at the industries with the lowest median years of tenure – those industries where people stay at their jobs the shortest amount of time.

Our barometer we focused on were those industries with a median tenure of five years or less.

In 2016, full-service restaurants employed the second-most workers of any industry in the United States, just behind elementary and secondary schools.

With nearly 11.9 million employees as of last month, food services and drinking establishments continue to be one of the most popular industries. With another 1.2 million people expected to join the industry by 2026, employees can expect to keep on changing in and out of restaurants.

As many establishments in the industry do not require a college degree to work there – restaurants make for great summer jobs for teenagers and college students.

This industry has been on quite the roll lately, having recently experienced its largest employment count since the Bureau of Labor Statistics began keeping this data in 1990.

Over 442,000 people worked in the industry at its height in October of 2016. While that number has tapered off some, the industry still employed just over 400,000 workers as of last month.

With a median years of tenure of just below two and half, one reason this industry can fluctuate so dramatically is that many projects within it (films, shows, etc.) are all time-sensitive and time-limited. Actors, animators, or editors may only work on a project for six months and then it’s on to the next one.

Social workers and personal care aides fall under the social assistance industry umbrella. This group of workers has also continued to steadily grow over the years, with 3.8 million employees in the industry as of last month.

However, this job field also experiences a lot of turnover given the responsibilities of the positions. Working with underprivileged youth, families, and other difficult circumstances give the industry the third-lowest tenure mark.