Let’s Talk Turkey: States With the Most Turkey Industry Jobs 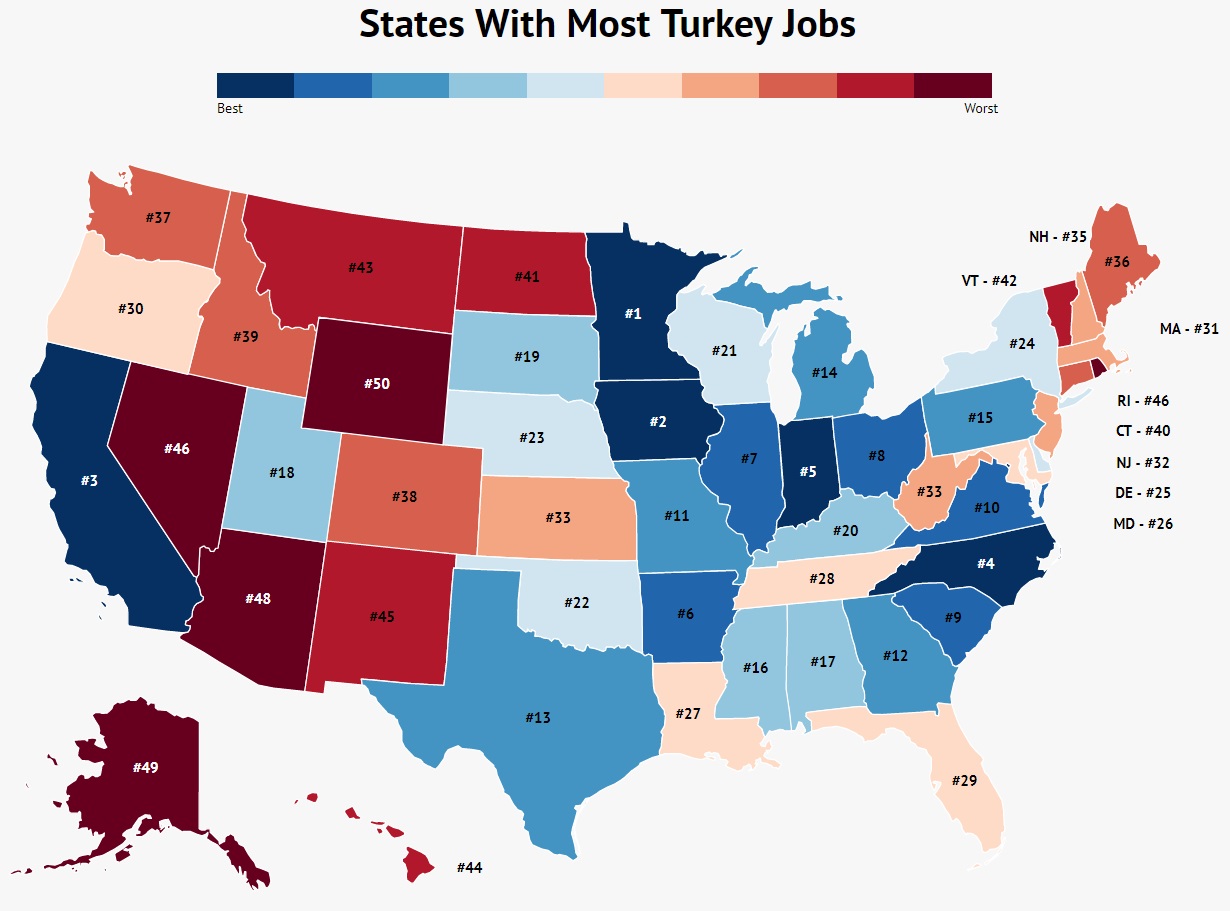 On the 24th of November this year, 286 million Americans will sit down with their families to give thanks for the previous year’s harvest.

That is, by eating 46 million turkeys on Thanksgiving according to a National Turkey Federation report.

We don’t know whom to thank for giving this uniquely American (and scrumptious) bird the dubious honor of Thanksgiving feast centerpiece. So instead, we sorted through government agriculture reports to figure out which states to thank for producing most of the country’s turkeys — and which states have turkeys to thank for creating the most jobs.

We dug through the data like it was pumpkin pie, and here’s what we found about the biggest turkey producing states in America.

A summary of the biggest turkey producers:

For this analysis, we first went to the esteemed National Turkey Federation for data on the jobs and wages paid as a direct result of turkey production.

We looked at United States Department of Agriculture (USDA) turkey forecast data to see which states raise the most turkeys. 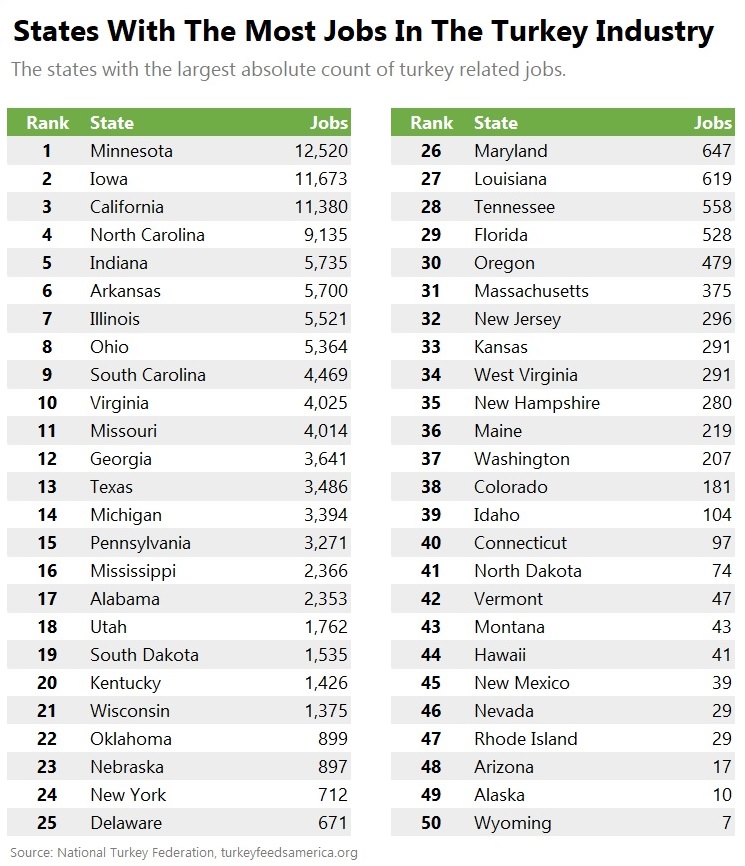 The turkey industry directly employs over 112,832 people in the United States, with even more in related industries. According to the National Turkey Federation:

Tens of thousands more are employed in related industries, such as contract growing, product distribution, equipment manufacturing and a wide variety of other affiliated services.

The winner for jobbles (job+gobble) is Minnesota, home to turkey producer Jennie-O. 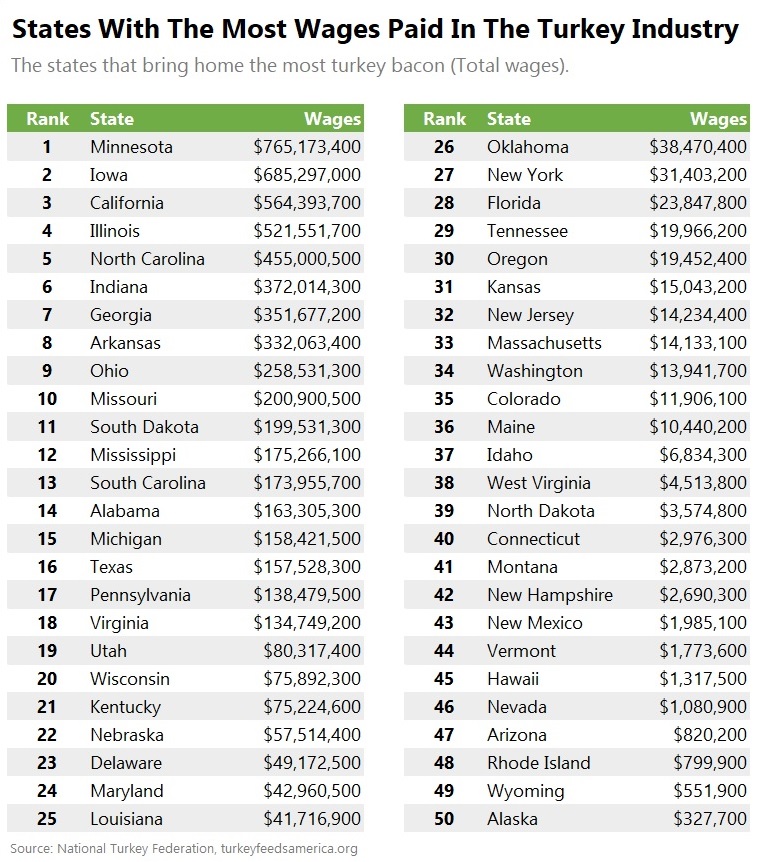 The states that pay the most turkey wages come in the same order as the ones that employ the most people, though Minnesota also pays the most per job in the top four production states. 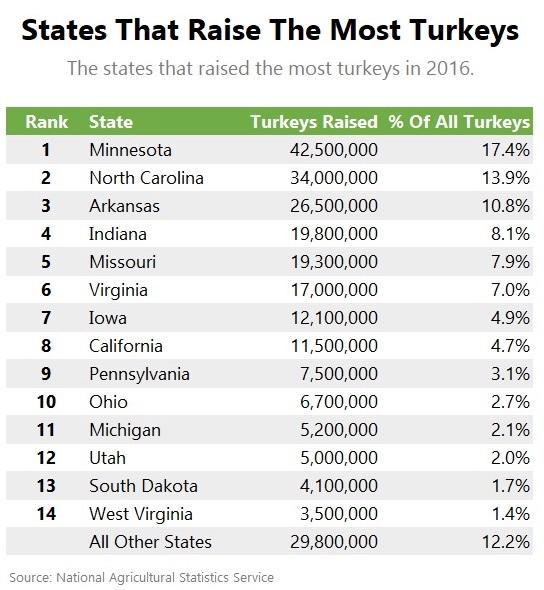 The top four turkey producing states raise more birds than the rest of the country combined, and the top six account for nearly two-thirds of the turkeys produced in 2017. 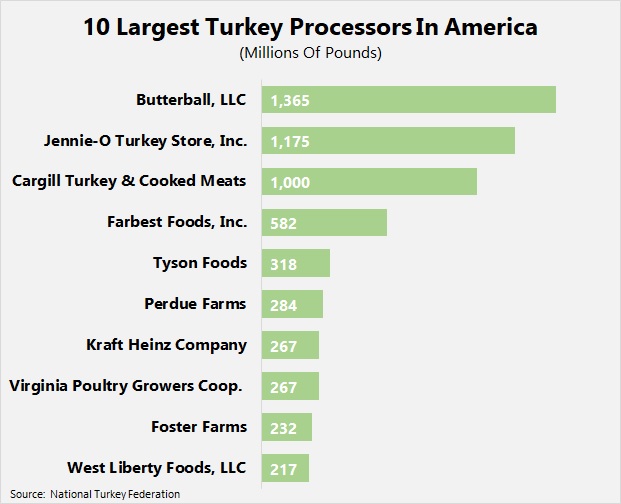 And as you can see, that’s probably because Butterball also processes the most turkeys, about 14 percent of the turkeys eaten in America

And good news for these states: people are going to keep gobbling it up

The United States is the world’s largest turkey producer and largest exporter of turkey products, and it is second in turkey consumption only to Israel.

According to the USDA, over the last 10 years, the percentage of poultry meat consumption has grown more rapidly than red meats — and states are keeping up by consistently raising more turkeys year over year.

For the states in our rankings, that’s news worth giving thanks for.

Coming up next: a review of the cranberry industry

These Are the 19 Best Companies to Work For in Jacksonville