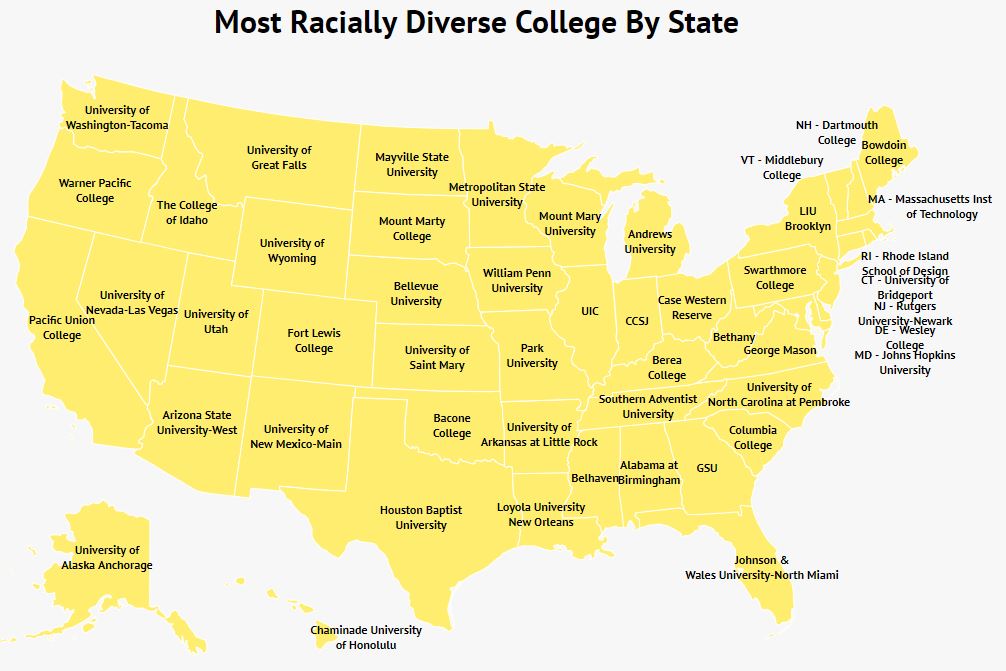 The Most Diverse College In Each State 2019

Ever wonder why all this talk about diversity?

It’s because diversity is a good thing. You’ve heard the saying, “Diversity is the art of thinking independently together.”

Typically, one of the selling points for running off to college is to meet people with all sorts of backgrounds. While attending classes is very important, the best learning occurs outside of the classroom.

Sure, we’ve all heard that, and it sounds like a cliche, but hear me out.

Not only do your hearts expand, you mind grows to understand things it wouldn’t have otherwise.

Below is a list of the most racially diverse college in each state, but first, here’s a look at the very best of the best:

If you’re looking to meet people from all different backgrounds be sure to add Chaminade to your college visit road trip. You’ll probably have to fly there, because it is located in the Aloha State–Hawaii.

In fact, most states on the top 10 list are not a surprise. They are colleges in diverse states with diverse populations.

Read on for more about the colleges and the methodology behind the data.

In order to determine which college ranked as the most racially diverse in each state, we aggregated and then sorted data on the racial profiles of each college and university in each of the 50 states in the country.

Using the Integrated Postsecondary Education Data System (IPEDS) and Department of Education College Scorecard data, we looked at the racial breakdown by percentage at each institution based on the following racial identification criteria:

We did not consider colleges that had a significant portion of their student body listed as “Unknown Race.” We focused our calculations on the known races of students from the College Scorecard data.

OK, thatĂ˘ÂÂs it! Now, a more detailed look at the 10 most racially diverse colleges in America:

Founded in 1955 by the Society of Mary, a Roman Catholic religious order also known as the Marianists, Chaminade is located in the historic Kaimuki district of Honolulu at the base of St. Louis Heights.

Chaminade University is accredited by the Western Association of Schools and Colleges.

Number two on our list is Pacific Union College, which is a private, liberal arts college located in Napa Valley.

The campus is located in the upper valley town of Angwin, eight miles north of St. Helena, California, within the Howell Mountain wine appellation. It is the only four-year college in Napa County.

A coeducational residential college, it serves an almost exclusively undergraduate student body, the overwhelming majority of which live on campus.

Rutgers, founded in 1766 in New Brunswick, is the eighth oldest college in the United States and a member of the Association of American Universities.

In 1945, the state legislature voted to turn Rutgers University, then a private liberal arts college, into a state university, and the following year merged the school with the former University of Newark, which became the Rutgers-Newark campus.

Any ranking on diversity is sure to include entities located in New York, and LIU Brooklyn, at number 4, is the New York college that is the most diverse.

LIU Brooklyn is a private institution of higher education located in Brooklyn, New York City, United States. It is the original unit and first of two main campuses of the private Long Island University System.

The university consists of eight schools or colleges, offering 130 undergraduate majors and 70 graduate majors. In addition, post-baccalaureate degrees are offered by all.

Founded in 1880 as the Indian University by Almon C. Bacone, Bacone College is the oldest continuously operating institution of higher education in Oklahoma.

The college has strong historical ties to various tribal nations, including the Cherokee Nation and the Muscogee Nation, and also to the American Baptist Churches, USA.

Houston Baptist University is a private Baptist university in Houston, Texas, and it takes the diversity cake in the massive state of Texas

The university was founded in 1960, with the aim of establishing a Christian liberal arts university dedicated to the development of moral character, the enrichment of spiritual lives and the perpetuation of growth in Christian ideals.

Accredited by the Southern Association of Colleges and Schools, HBU offers academic programs in more than 40 undergraduate and 11 graduate areas of study.

Number 8 on our list is the University of Nevada, Las Vegas, a public research university in the Las Vegas suburb of Paradise, Nevada. The 332-acre urban campus of UNLV is about 1.6 mi east of the Las Vegas Strip.

Students can check out more than 250 student organizations, participate in the school’s large community of fraternities and sororities and join or cheer for the UNLV Rebels athletic teams, which compete in the NCAA Division I Mountain West Conference.

There are also research opportunities through the university’s many academic hubs, including the Center for Gaming Research, the Center for Information and Communication Technology and the Arnold Shaw Popular Music Research Center.

9. University of Illinois at Chicago

The University of Illinois at Chicago is next. Its setting is urban, and the campus size is 240 acres. It utilizes a semester-based academic calendar.

UIC is located near public transportation stops, making the university both accessible for commuters and convenient for students who live on campus.

There are more than 200 student clubs and organizations to check out, including fraternities and sororities.

Number 10 on our list is The Johnson & Wales – North Miami. This is a private university located in North Miami in the Miami area.

There you have it! There are the top of the top colleges when it comes to racial diversity.

If you’re looking at universities in America with the most racially diverse student bodies, this is an accurate list. Below is a complete list of the most diverse college in each of the 50 states.

These colleges are guaranteed to make you feel like you have been ‘around the world in 80 days’ or something like that. 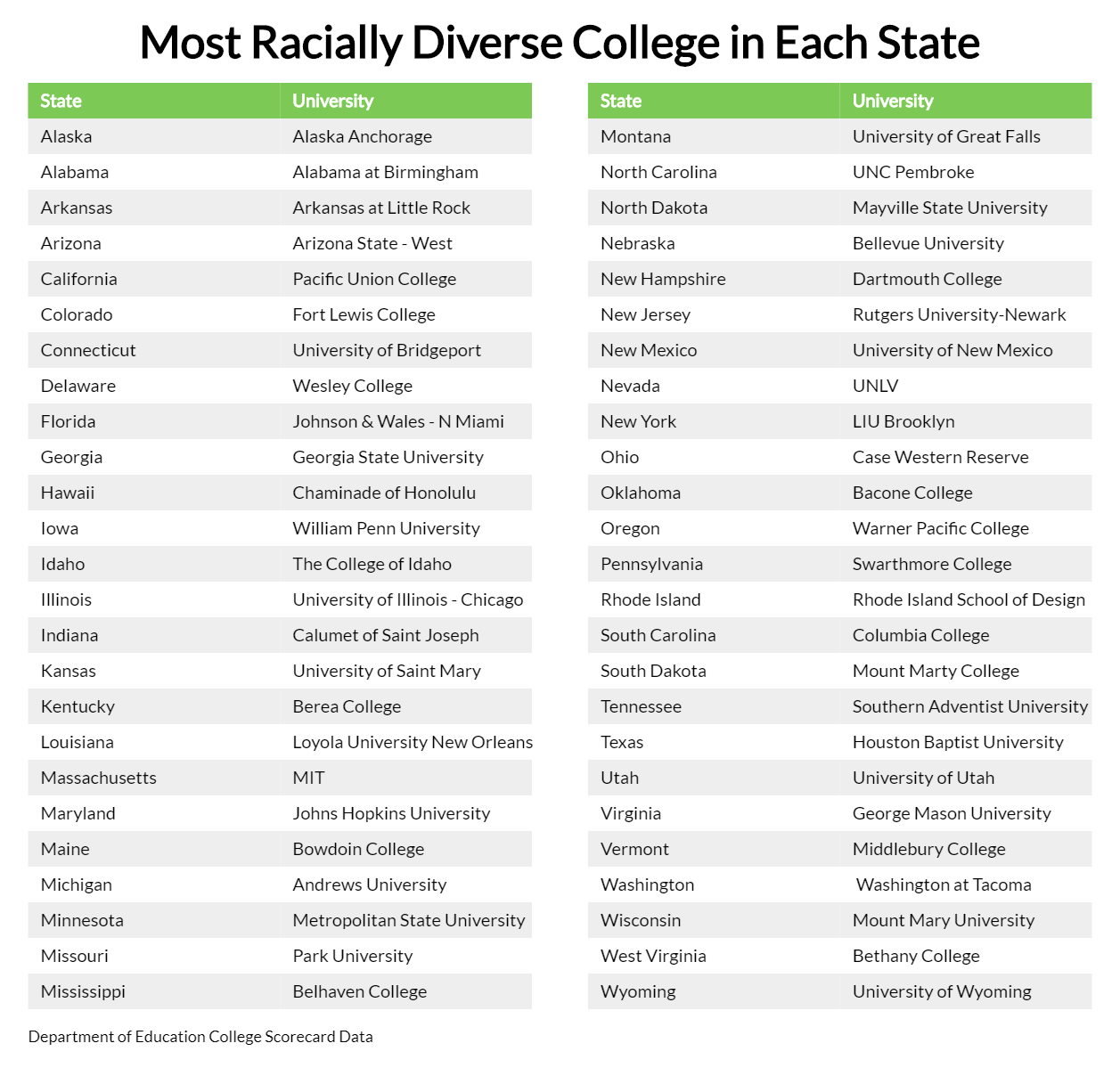