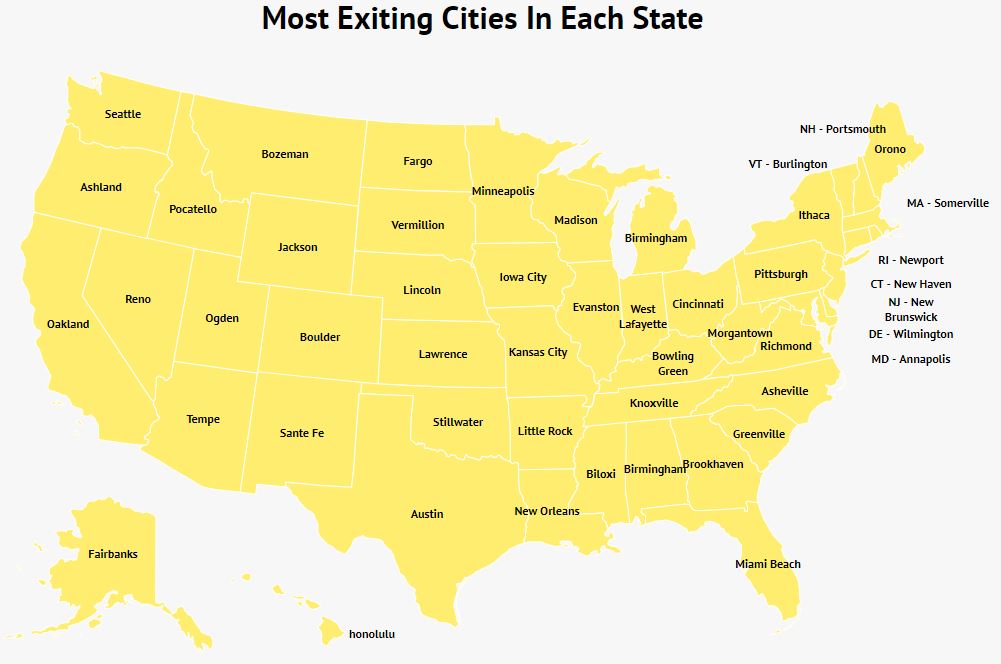 The Most Exciting City In Each State for 2019

by Kavita Pillai
Rankings - 11 months ago

If I asked you which city in the United States is the most exciting city, what would you say?

You’ll be surprised to know that you are incorrect.

In fact, New York City or Los Angeles aren’t even the most exciting cities in their respective states.

While we at Zippia understand that the very notion of being exciting is subjective, I think we can all agree that we want an exciting city to have certain attributes.

What are those attributes?

Things like a ton to do on weekend, a young population, plenty of live events, and a good bar, or three. So, we decided to look at these criteria in order to come up with the most exciting city in each state.

Before we get to the whole list, here are the most exciting of the exciting cities in America:

These are all pretty big cities, with the exception of Jackson, whose population is barely over 10,000, but this ski-town has an amazing number of things to do, which is what put it on our list.

Oakland and Kansas City might surprise a few of you, but visit these cities, and your will know why they made this list.

To formulate our list, we first had to decide on the criteria we feel make a city exciting.

Nothing to do equals boredom, so we know that when there are plenty of options to choose from when it comes to things to do.

We used the latest American Community Survey Data and the Bureau of Labor Statistics, and websites like Yelp and the CDC, to determine the most exciting city in each of the 50 states.

Depending on the category, we looked at a per person or per square mile basis. We ranked each major city in America based on the following:

After that, we compiled our data for all the above categories and ranked each city in each state from most to least exciting. Are you ready to find out the results of our study?

The full list is below, but here is a little bit of detail on the most exciting cities:

Are you surprised Seattle is the best of the most exciting cities?

Seattle has everything to offer for the excitement-seeking soul, including great food, an astounding number of bars and nightlife options, and a huge selection of parks and trails for your body and mind.

Let us all try to visit this northwest city soon.

Not only is this city the capital of Texas, it is also a music capital.

No matter what floats your boat, Austin will satisfy your excitement cravings.

A huge number of bars, restaurants, theaters, along with 35% of its population being between 18 and 34, this city is on this list for more reasons than one.

Another city that shouldn’t surprise anyone is Miami.

Amazing beaches and even amazing music and food puts this Florida cultural center on our list of most exciting cities.

Surprised to see this North Carolina city that is located in the Blue Ridge Mountains?

This city of 89,121 people, has one of the quaintest downtown with delicious foods from all over the world.

How could New Orleans not be on this list, right?

Anyone who has been to this city, nicknamed the “Big Easy,” knows that NOLA has round-the-clock nightlife, vibrant life music, amazing food, and plenty of young people having the time of their lives.

The city’s drinking culture boasts more bars per person than anywhere else in the US.

What can I say, if you haven’t been to New Orleans, you really need to.

Everyone needs to visit Hawaii at least once in their lifetime, if they can. And when you do, don’t miss Honolulu.

There is a reason why there are so many movies about this capital city.

Not only is this city huge, there are ample things to do in this dense city to satisfy the quirkiest of you.

Plus, people are super fit, in spite of the amazing deliciousness this city has to offer, thanks to the wide array of active life options.

Pittsburgh is a massively populated city, but it is the type of people that constitute this population that makes this Pennsylvania city super exciting.

Pittsburgh is filled with musicians, artists, foodies, in addition to a large number of restaurants and bars to cater to this young city.

Located in the San Francisco area, this port city is a mecca of great food and amazing wildlife.

Yes, this very populated city has a large number of parks and trails for the fitness enthusiast.

So, go to Oakland, and take a hike. (In the best possible way)

Jackson, WY is one of the richest places in the United States, and one of the most beautiful regions you can visit.

Oh yes, KC, Missouri is on our list of the most exciting, and believe me, it is one of the best cities in America if you love eating, drinking, and having a good time.

I might be a bit biased, as I lived in the KC area for over a decade, but data backs my bais.

Home to some of the artsy-est neighborhoods in the state, and some of the best in the nation, this city is worth your trip.

So there you have it. The best of the best.

No matter what kind of excitement you are seeking, our list has got you.

Hope you are ready to experience these places — get some rest and save up your energy, before you get there, because you are going to have a lot of things to do.

Here is the full list of the most exciting city in each state: