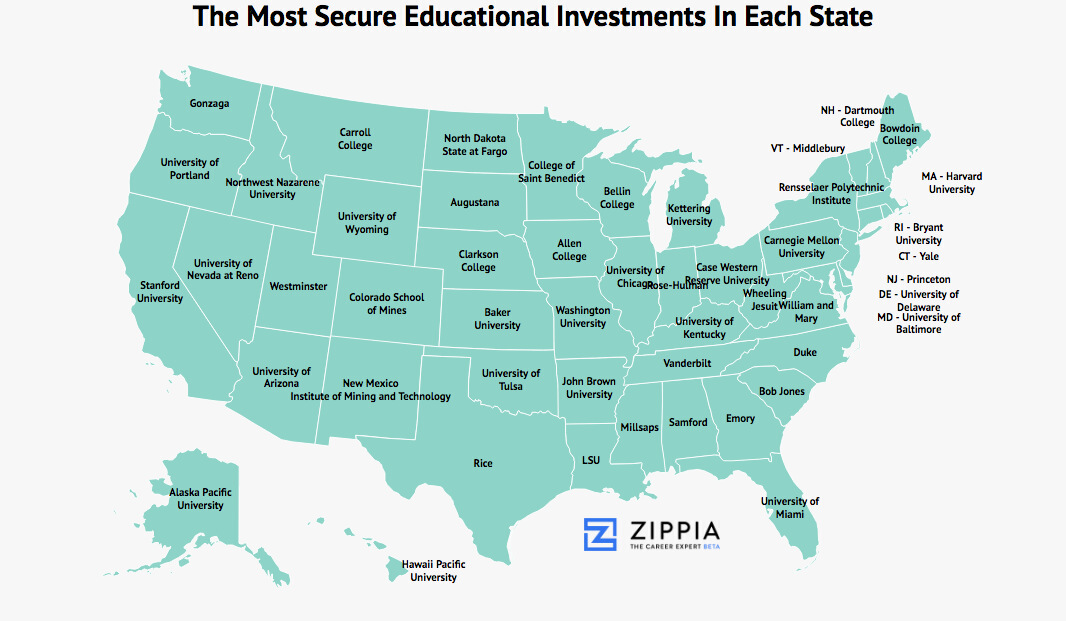 The Best Colleges for Securing Your Loan’s Safety

The latest Higher Education Research Institute freshmen study shows that 82 percent of incoming students selected being “very well off financially” as essential or very important to their college choice — and it had better be, as the national student default rate rose to 11.3 percent.

And while a college’s median salaries and employment rates serve as excellent benchmarks for success, just as important is the darker side — the probability that graduates will fail and be stuck with an enormous burden… one that weighs about four years and $150,000, on average.

To help showcase some of these educational AAA investments, in addition to the map at the top of this article, we at Zippia have put together a list of the best educational investments by state.

If you were wondering about the least safe investments in your future we’ve got that too — but here are the ten Most Financially Secure Colleges, with the full list at the bottom of this page:

Get a job that keeps you out of loan default
We analyzed millions of resumes to determine what jobs people with your degree are most likely to land right out of college and how they pay — search by geographical area or desired field.

How we determined the Most Secure College Investments

Looking at a college education as an investment, we used several factors to come up with a ranking index: how much each school costs, what the risk is, and how easy it is to pay it back.

We used Integrated Postsecondary Education Data System (IPEDS) to determine how much the schools cost to attend — which is the cost of the investment. To approximate the risk of taking out loans to finance this venture, we took Department of Education data on school default rates.

And finally, we used CollegeScoreCard data to gauge the median salary at six years — this is the most critical payment success period. We assigned values to these metrics to select the Most Financially Risky Colleges in each state. Then we ranked each state’s school according to their rating.

College: Harvard University
City: Boston, MA
Default Rate: .8 percent
Broadview University was founded in 1977, began offering bachelor’s degrees in 2005 before losing its accreditor was de-recognized by the Department of Education accreditation in 2016. So, there’s that.

Some of the takeaways

And these institutions care about Big Brother watching, because if a school has a cohort default rate over 30 percent for three years or 40 percent for one year, it loses eligibility to participate in the Federal Family Education Loan (FFEL), Direct Loan, and Federal Pell Grant Programs for the year.

Get a job that keeps you out of loan default
We analyzed millions of resumes to determine what jobs people with your degree are most likely to land right out of college and how they pay — search by geographical area or desired field.

As a note, the University of Wyoming is in this list by default… there are so few colleges in Wyoming that it’s also the most financially insecure bachelor’s-granting college as well.