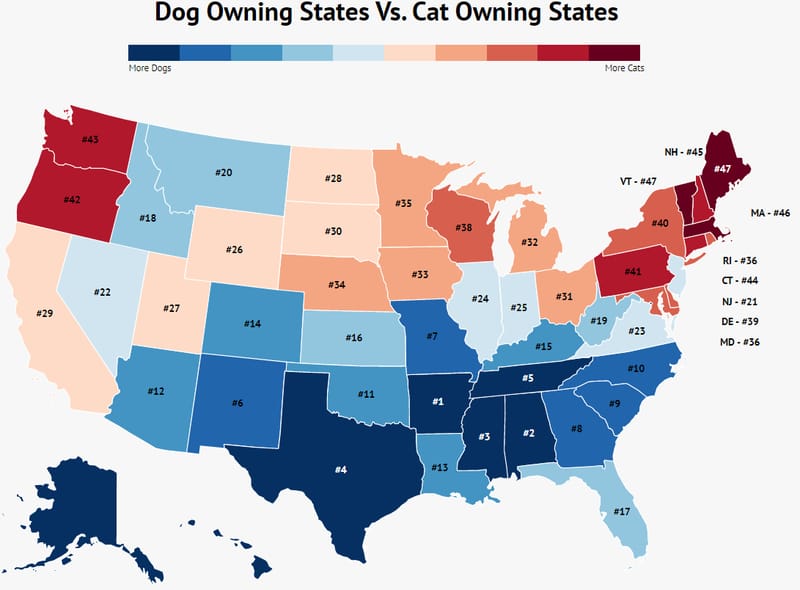 Dog States vs Cat States: States With The Most Dogs

by Kathy Morris
Study - 4 months ago 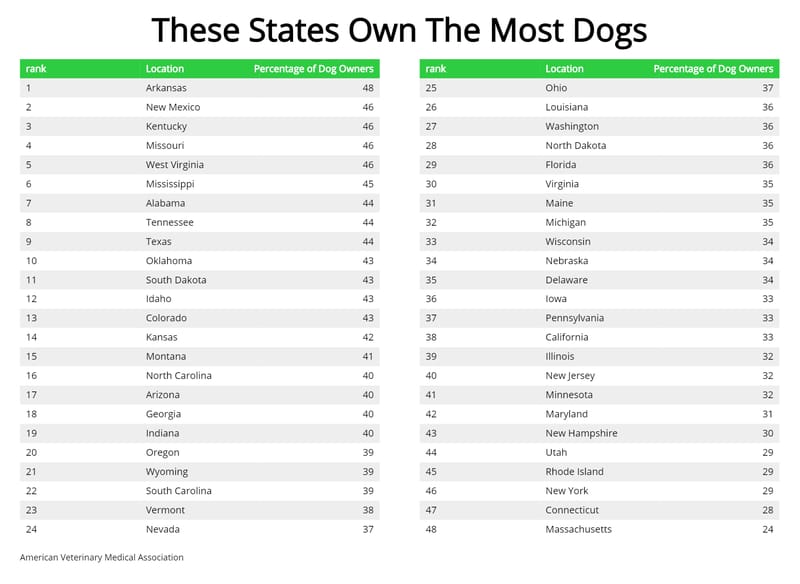 About 89 million Americans own a dog. Which means tens of millions of Americans come home from work to a fluffy, adoring canine companion.

Pet ownership is becoming more and more common. The American Pet Products Association estimates the number of pets has doubled since 1988 and continues to rise. 2-out-of-5 houses now own a pup.

While dogs can enrich your life, they also soak up a lot of your time and money. Since Americans are spending a tidy bit of their paycheck on their canine companions, Zippia doggedly hit the data to investigate US dog ownership.

A NOTE ON METHODOLOGY

We used several data sources to get a full picture look at dog ownership in the US. We used data from the American Veterinary Medical Association for percentage of pet owning home, and the breakdown between cat and dog ownership.

We turned to the American Kennel Club to learn each state’s favorite dog. Finally, we used the BLS TED data to breakdown pet spending by household.

Summary Of Our Findings

Arkansas is for (dog) lovers. 48% of households in the “nature state” own a dog. This means Arkansans are more likely than other state to come to a dog. On the lower end, we have Massachusetts, where only 24% of households have a pet dog.

One huge geographic trend? North versus south: Southern states have an extremely high rate of dog ownership and dominate the top 10. Meanwhile, northeastern states cling to the bottom. This could be due to a combination of population density and weather. Walking your dog in a foot of snow isn’t fun, and might dissuade Northeasterners from taking the plunge into dog ownership. You can see states with a high percent of dog owners for the most part still own a much higher percentages of dogs than cats. What is interesting is New Englanders may not own a great number of dogs, but do dominate cat ownership. Maybe they enjoy having a pet that doesn’t need to go outside for a bathroom break during blizzard. Or maybe they simply appreciate the gentler, less adamant affection of cats.

Let’s check out the type of dog most popular in each of these states: America loves Labrador retrievers! While a handful of states buck the trend, there is no doubt that America’s most popular dog is the lab. Of course, there are plenty of other good boys on the map, including the German Shepherd, beagle, and French Bulldog.

Of course, as any dog owner knows, dogs mean money. So let’s see how much green households our spending on their doggo.

The above data is for all pet types, in case any dog owners are startled to see such a low number (Which equals one emergency vet visit.) This means some goldfish could be driving down the number. However, it does highlight some interesting trends.

One being that married couples without children spend some of that free cash spoiling their pooch. When couples have children their spending goes down, particularly when the children are under 6. Once their children reach adulthood, they once again flourish their dog with material love.

The States That Own The Most Dogs

There you have it- the south is a dog haven, while New England is purr-fect for cat lovers. Of course, many pet owners own both, but dog ownership is highest in the southern region.

Overall, dog ownership in the US is trending up. While some states have a greater percentage of dogs than others, dog owners in all states are growing and no doubt adore their pups equally. If you doubt it, just check out the chart of how much they spend on their dogs each year gain.