Ever wonder how much everyone else is spending for the holiday season? If you know what state they live in, that can be a huge indicator of how much money they have to spend on gifts.

Where you live in the United States directly impacts how much cash is in your pocket. When we mapped out of the cost of living in each state, it highlighted staggering geographical differences.

However, cost of living doesn’t paint the whole picture, since often a higher cost of living comes with higher incomes. When we think of the term affordable, what we are really thinking of is how much money we have left over. After all, it doesn’t matter how cheap something is if you don’t have the cash to pay for it.

With this in mind, we decided to break down the data to find the most (and least!) affordable states.

We used MIT’s Living Wage Calculator to determine the living wage. The living wage is the income needed yearly to support two adults and one kid.

We have a full list of the 50 states, but first, let’s check out the 5 most affordable states.

The Top 5 Most Affordable States

Maine’s cost of living falls at a neither impressive or appalling #22. However, it’s healthy annual salary of $61,783 pushes it to the #1 most affordable state. The average Mainer makes $10,478 more than the cost of living. That’s a nice cushion.

The second New England state to make the list, Rhode Island is the #3 most affordable state to live. While Providence and other majors cities in the Ocean state can be a little hard on the wallet, Rhode Island offers affordable suburbs with a nice average salary.

Coming in at #4, Ohio is the first midwestern state on the list. While Ohio’s average salary is one of the lowest in the top 10, the low cost of living make it an attractive, affordable option for many. Something particularly nice about Ohio? The affordability is spread fairly evenly throughout the state.

Kentucky has the warmest temperatures and lowest annual salary in the top 10. However, even though Kentuckians paychecks may be on the low end, the cost of living is dirt cheap, and means you can live quite well on less. Just think of the money they save on sweaters.

The sunshine state may have fantastic weather and be a favorite for vacationers, but some workers may be struggling to make ends meet. The cost of living is on the low side at $52,206, but the average annual salary is only $51,147.45. This puts the affordability difference in the negative. Yikes.

Maryland suffers from its proximity to pricey DC. While there may be affordable parts of Maryland, at a state level the numbers aren’t fun. The average annual income is -$911 below the cost of living.

Delaware may be known as the “first state,” but it certainly is not first for affordability. In fact, Delaware comes in near the bottom of affordability due to the negative gap in between cost of living and annual salary.

Hawaii is notoriously expensive and it is no surprise to find the Aloha state on the list. While the average salary is one of the highest ($60,820), it is no match for a sky high cost of living. Living in paradise is pricey, just ask the average Hawaiian worker’s wallet.

Virginia’s cost of living isn’t helped by it’s proximity to the pricey DC. While there are parts of Virginia that are affordable, on a state level the numbers are grim. The average Virginian salary is only $287 above the cost of living. That is not much of a cushion.

Did your state not appear in the bottom or top 5? Check out the full list below and see where your state landed.

Here Are The Fifty States, From Most Affordable To Least 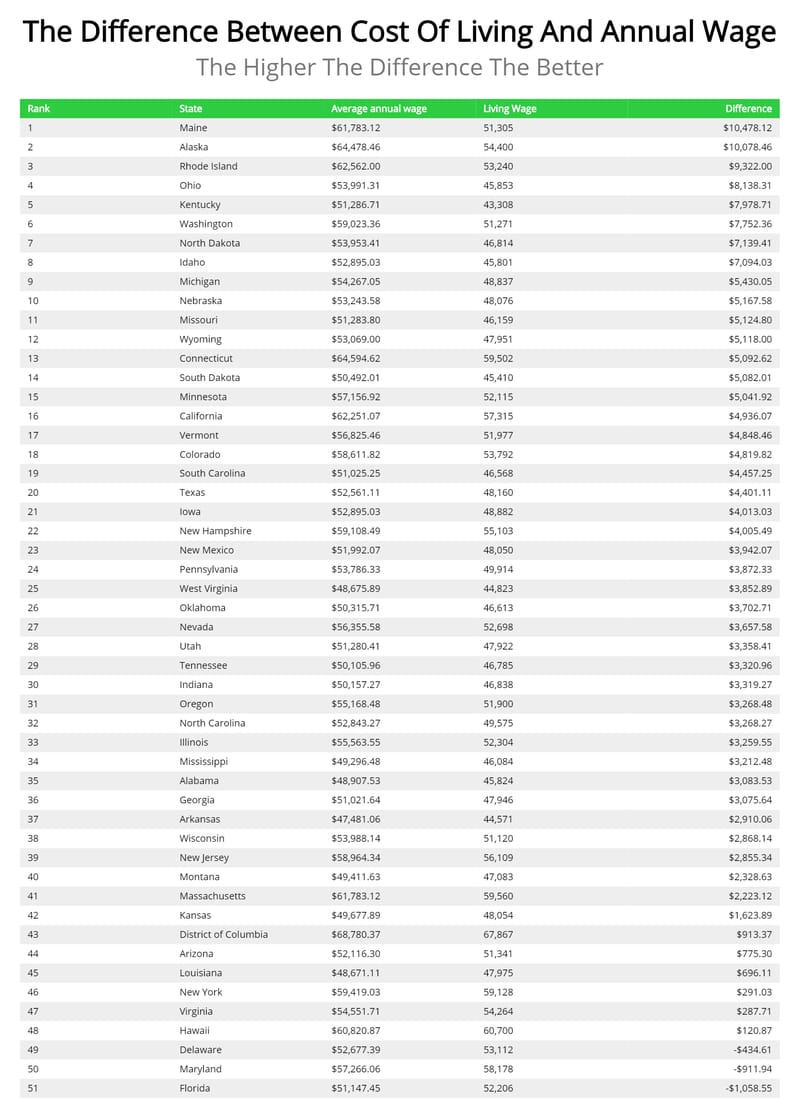 Overall, while this a good big picture look at the affordability of living in each state, personal finances are, well, personal. Someone who makes well above the state annual wage might be flourishing in the bottom five. Similarly, someone in Maine who makes minimum wage will be really struggling.