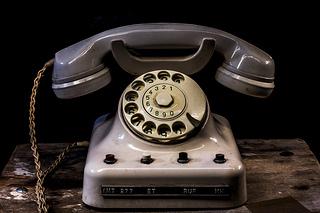 7 Rules for Phone Use in Hiring

I was a bit of an idiot on Monday.

I had 11 minutes before I had to run to a meeting, and I was still putting the finishing touches on Monday’s blog post. My phone rang. I didn’t recognize the number, but we have a metric ton going on right now, so I’m getting lots of calls from numbers I don’t recognize. An intelligent person would have let the call go to voicemail, since there were ELEVEN MINUTES left before I hit a deadline.

I picked up the phone.

You know where this is going, right? I attempted to both write the blog post and have an intelligent conversation, only to realize that I really had to get off the phone. So I did. With the excuse that I had a deadline in 11 minutes and that I was dumb for picking up the phone to begin with. The person on the other end of the phone was incredibly gracious and sent me a great follow-up email. I got off the phone, finished the blog post, and started mentally drafting this one :).

I’m not the only phone idiot out there. Just this week, a friend of mine sent me an email about a recruiter who made just about every phone mistake possible – including hanging up on him! So I figured I’d draft a few rules to use – both in hiring and in general. Here they are:

Free Interview Template: Use this template to run a consistent interview process every time and to make better hiring decisions. Download Your Copy

1. Don’t pick up the phone when you can’t talk

I clearly violated this one on Monday! Between voicemail, email, texting, Facebook, Twitter, Instagram, smoke signals, and in-person communication, people can definitely get messages to you. So seriously, don’t pick up the phone if you don’t have time to talk.

2. ALWAYS call back if they left a message

Or at least communicate somehow. Leaving voicemails into vacuums sucks. If someone took the time to call you and leave a message, call them back. If you don’t call them back, you should communicate to them via email or whatnot and let them know you got their message. Candidates can be especially nervous if you wait too long before getting back to them, so make sure you respond as quickly as possible.

3. Use contacts to avoid looking dumb

I’ll confess to struggling with this myself, but the easiest way to not sound dumb on the phone as you wrack your brain to put the caller in context is to immediately add any phone number to your contacts. That way, when I call you on Thursday night when you’re at your daughter’s soccer game, you’ll see “Jenn Steele” instead of a random 617 cell number. This also can help you screen your calls – if you’re not okay with talking to me at the soccer game, don’t pick up. Call me back later or (even better) shoot me an email and find out what time would be good to call me back.

4. Leave some sort of message

I don’t know if you’ve heard of the “One Ring” phone scam,Â where your phone gets a single ring, and returning the call will cost a huge amount of money. But its existence emphasizes the importance of leaving a message when you call. Maybe you won’t leave a voicemail (and I know many people who never bother to check their voicemail), but you should communicate that you did try to call.

This one especially holds true when you’re calling a candidate. It’s best to set up a time to call rather than risk calling a candidate at a time when she REALLY CANNOT TALK (and, sadly, will probably pick up the phone since she wants to hear your news). By just texting or shooting an email over saying, “I have news; when can you chat?” You avoid awkward conversations where the candidate is trying to field your call but can’t actually say anything to you.

Never never never never hang up on someone. Never act annoyed when you’re stupid and pick up the phone at your family dinner. Never scream or be rude. I shouldn’t even have to put this one in here, but since a recruiter hung up on a friend of mine recently, I apparently have to remind you. Don’t make me hunt you down because you’ve been rude on the phone…

7. Never use the phone in the bathroom

Yes, this one is closely related to #1, but it gets its own special category thanks to the extra special ick factor. There’s this thing with phones. They have a microphone. This is how the person on the other end of the line can hear you when you speak. You know what else they can hear? EVERYTHING ELSE YOU’RE DOING. So just… no.

What have I missed (that I’m probably doing to people)? What phone behaviors drive you batty?

4 Reasons to Love Working with Recruiters
14 Ingredients For A Killer Recruiting Presence On Facebook
Get Your Jobs Found - Think Like an Online Marketer
Content Tips And Other Tools For Recruitment Marketing
Do Your Employees Suck? Check Your Job Descriptions.
Down the Recruitment Rabbit Hole: Why Stereotyping Is Bad for Business